The heroic and epic film version of "The Lord of the Rings" brings beauty, awe and excitement back to the big screen. 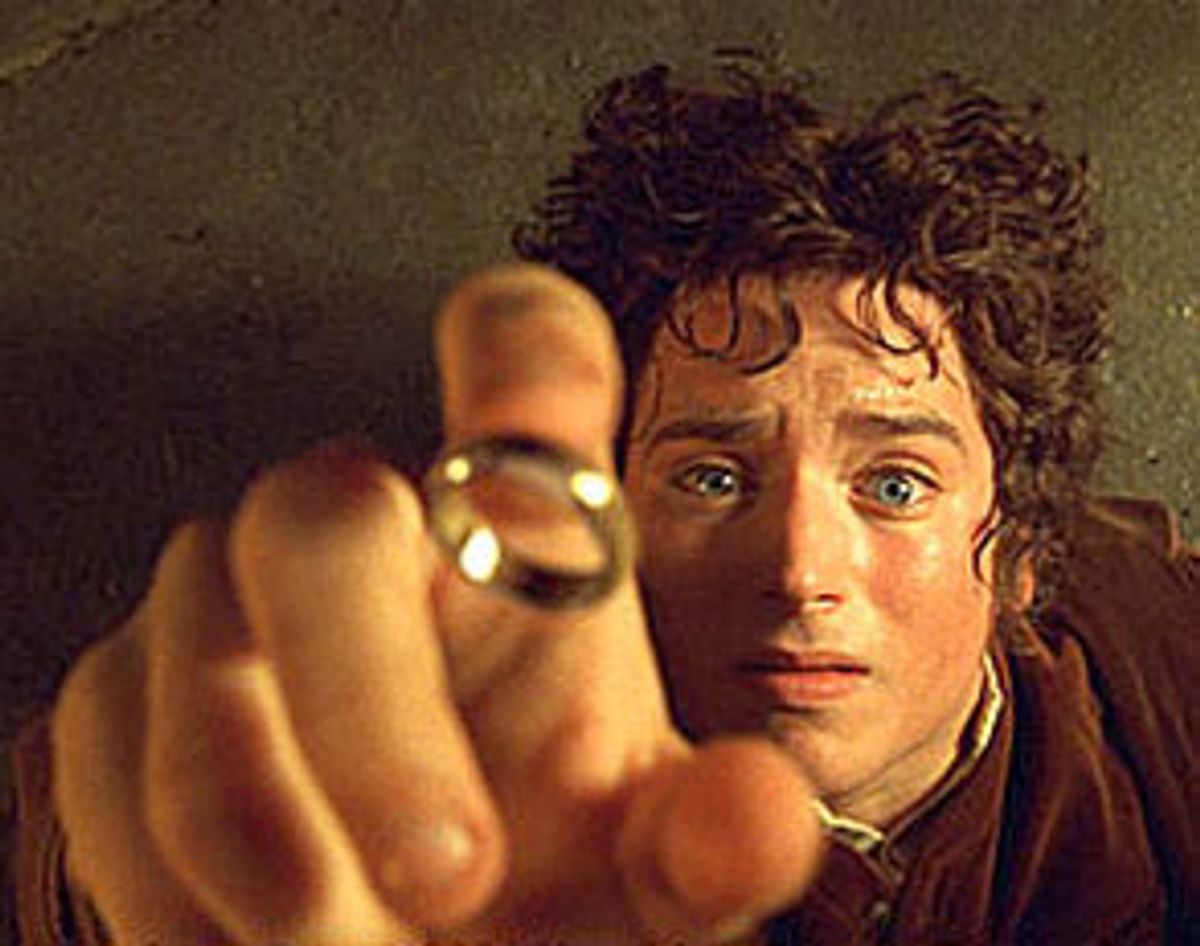 The most heartbreaking thing about faithful moviegoing is that awe, beauty and excitement, three of the things we go to the movies for, are the very things we're cheated of the most. The great wonder of "The Lord of the Rings: The Fellowship of the Ring" is that it bathes us in all three, to the point where we remember -- in a vague, pleasurably hallucinatory sensation from another lifetime -- why we go to the movies in the first place. It would be an insult to say the picture merely lives up to its hype; it crashes the meaning of hype, exposing it as the graven image it is. Advertising is dead: Long live moviemaking.

The first 10 minutes of "The Fellowship of the Ring" renders all hype -- whether it's the kind that's bought and paid for or the kind generated by eager fans -- inconsequential. In adapting the story of hobbit Frodo Baggins and his mission to guard and ultimately destroy a ring that has the power to bring cursed evil upon the world, director Peter Jackson has given us an epic in the true sense, with none of the pretentious fakery that the word "epic" has come to imply.

Jackson's approach is refreshingly egalitarian: I had feared that "The Fellowship of the Rings" would be a ferociously clubby movie, one that would, with a snobbish sniff, shut out people unfamiliar with Tolkien's books.

My guess, though, is that most fans of the books will warm to Jackson's version (even if the story has been streamlined a bit, with some characters' roles enhanced and other figures sliced out altogether). And as for everyone else, Jackson makes all the right moves in reaching out to them.

He explains the essential back story in a fleet, graceful expository passage at the beginning: In ancient times, in an undefined place, a set of powerful golden rings were forged and dispersed to various kingdoms across the land. The dark lord Sauron himself made the One Ring, the ring that would complete and intensify the power of all the others. But the ring was taken from him, and ages later, it accidentally found its way into the hands of a humble Hobbit by the name of Bilbo Baggins (here played by Ian Holm). Sauron will stop at nothing to get the ring back, but he needs to find it first. That's the tale told in "The Hobbit," the prequel to Tolkien's trilogy.

As the movie opens, the aged Bilbo has decided to bequeath the ring to his favorite cousin, Frodo (Elijah Wood), who is unaware of its significance. A great wizard, Gandalf the Grey (Ian McKellen), clues Frodo in to its dangerous powers, and urges him to transport the ring to the one place where it can be destroyed forever. Frodo sets out, along the way assembling a ragtag crew of colleagues. Some of them, like Frodo's faithful friend Sam (Sean Astin), come from the hobbits' home, the grassy, idyllic Shire. Gimli (John Rhys-Davis) is a gruff, rough dwarf. Strider (Viggo Mortensen) is a mysterious human who understands how crucial it is to keep the ring out of Sauron's hands. And Legolas (Orlando Bloom) is a golden-handsome Elf warrior.

Jackson captures the spirit and flavor of Tolkien's storytelling in the way he lays the group's adventures before us. Early on we're introduced to the Black Riders, a nightmare-haunting group of faceless horsemen who have been sent by Sauron to find and capture the ring. They're the movie's earliest clue that "The Fellowship of the Ring" isn't going to be a sprightly, cheerful jaunt: At moments, in fact, it's terrifying.

"The Fellowship of the Ring" is soaked around the edges with a melancholy darkness, which is part of what gives it such resonance and depth. (At this point I need to make a special plea to all those cranky souls who have no patience for ren-faire and sword-and-sorcery bullcrap: My brothers and sisters, I feel your pain, but "The Fellowship of the Ring" is too big and too masterly to be scrunched into those puny categories.)

Jackson unfurls the action so that it drifts into graceful peaks and valleys; the picture is a marvel of pacing, built on the premise that the proper flow of tension and suspense is the most powerful special effect of all, not to mention the cheapest. "The Fellowship of the Ring" looks lavish but never wasteful, miraculous given the way everything in Hollywood these days costs big money, and yet nothing looks like it. (Compared with "Fellowship," the gaudy and lifeless "Harry Potter and the Sorceror's Stone" looks like a play mounted at a school for rich kids, where no expense was spared in the attempt to cover up clumsy amateurishness.)

Jackson doesn't scrimp on staging, and the images and scenery have a grand, burnished richness. His battle sequences are magnificently plotted, and shot so that every angle of the action is clear. (They're thrilling, but they also invoke the peril of warfare. There's always the sense that people -- in other words, characters you've come to care about -- could die.)

He shows us immense landscapes of snow or forest or rolling greenery that make us feel incredibly small and inescapably human. And his special effects are so seamless, so organic to the scenes in which they appear, that you often spot them, dreamlike, first out of the corner of your eye. (I gasped in disbelief as I watched a tidal wave, conjured by an Elf princess, swiftly but subtly transform into a herd of galloping horses, their heads and manes defined by dancing crystals of water.)

This is moviemaking on a grand scale, which is not to say that it's merely a big, impressive movie. (Any old goat can make one of those.) The crucial distinction is that Jackson's sense of scale is impeccable. The vistas are huge and wondrous, the special effects sparkling: But Jackson also trains the eye on details that, more than anything else, define the movie's rich, dreamy look.

The cloaks worn by Frodo and his gang are clasped with delicate green enamel pins in the shape of an art nouveau leaf. As readers of the Tolkien books know, the clasps will ultimately have a special role. Even so, considering that most of us understand the visual shorthand of movie props and costumes, there's no reason they'd have to be so exquisitely made. As it is, with their tendrils and fragile veins, they look like family heirlooms, and they're valuable grace notes to the look of the movie. Unlike the painstakingly re-created carpets and china patterns of James Cameron's "Titanic," obsessive details that just get swallowed up in the blur of the movie's hubris anyway, these cloak pins are a bit of visual music to go along with the story.

They also help establish its gorgeous pre-Raphaelite look. Rivendell is filled with architectural details (trellises, gazebos) that echo the graceful swoops and swirls of nature -- if Alphonse Mucha were a production designer, he'd be proud to put his name on it. (As it is, production designer Grant Major is the one who deserves the credit.) Cate Blanchett plays Galadriel, a bewitching but foreboding Elf queen, and the movie makes perfect use of the actress's floating carriage and luminescent porcelain skin: Her Galadriel is an enchantress who's floated out of an Edward Burne-Jones painting.

Visual cues like that one give "The Fellowship of the Ring" a glow that's both ancient and redolent of the turn of the last century. They also establish it as a love letter of sorts to England, specifically to the beauty of the English countryside, which Tolkien so loved. Cinematographer Andrew Lesnie ("Babe," "Babe: Pig in the City") shoots the billowing, grassy hills so that they sing out with love for that countryside -- no matter that it wasn't filmed there: Through Lesnie's lens New Zealand is its spiritual twin.

And yet the secret to the great wonder of "The Fellowship of the Ring" lies not just in Jackson's ability to marshal detail and action and panorama to do his bidding. It's in the way he opens his camera to the faces of his performers. Most "big" movies make a human sacrifice of their actors; that's become so common it's almost an accepted practice. (You had to paw through the rubble of "The Phantom Menace" to get any sense of its star, Ewan McGregor.)

"The Fellowship of the Ring" is a big movie in its scope and vision. But Jackson makes it work on a much more intimate level as well, by allowing the faces of the characters to tell the story in its most emotional terms. The great Christopher Lee appears as the once good, now malevolent wizard Saruman, and, with his robes and long white hair, he looks like an evil Jesus. Jackson shoots Lee's face, with its noble, hooked contours, as if it were one of the world's great landscapes. Ian McKellen's Gandalf has a silvery nobility that's never overplayed -- he's a wizard who clearly understands that the glimmering undercurrents of magic are just as powerful as its giant signs and explosions.

Sean Astin's Sam, Frodo's cheerful and devoted companion, has a face that's almost heartbreakingly open. And Elijah Wood's Frodo holds the camera captivated in just about every one of his scenes. He shows equal parts boyishness and gravity. His face, all immense eyes, still glows with youthful innocence, but there's also something fearfully mature about it: If you've read the books, you'll see how that look points the way to the darker, more devastating turns this story will take from here. (The two sequels, "The Two Towers" and "The Return of the King," have already been shot and are scheduled to be released at Christmastime in 2002 and 2003, respectively.)

"The Fellowship of the Ring" could have gone wrong in so many ways. As it is, though, I see it as nearly perfect: It's one of the best fantasy pictures ever made. And it's a lovely example of how, with care and thought and not all that much money (Jackson will have made all three "Rings" movies for less than $300 million), a director can successfully capture the mood and feel of a book on the big screen. (I read and enjoyed the books more than 25 years ago, but the details of them had gone hazy. Jackson brought them back more vividly than I could have hoped.)

Most of us are happy enough these days to go to the movies and not get screwed, so rarely does a movie even keep its promises, much less surpass them. That's why "The Fellowship of the Ring" is something of a miracle. It makes the great potentialities of movies seem realistic and achievable. Inventive, magical and relatively inexpensive, it proves that throwing money at a movie doesn't necessarily make it good -- an idea that should be much easier for Hollywood to grasp than it actually is.

Writing about Bernardo Bertolucci's "1900," Pauline Kael identified the distinction between studio-driven big-budget pictures and those that are powered by the skill and vision of a filmmaker. "The artist-initiated epic is an obsessive testing of possibilities, and often it comes out of an overwhelming desire to express what the artist thinks are the unconscious needs of the public. It comes, too, from a conviction, or a hope, that if you give popular audiences the greatest you have in you they will respond."

"The Fellowship of the Ring" throws down a daunting challenge to filmmakers everywhere, and even more so to the studios that back them. Audiences deserve the greatest you have in you. If you've made money off giving them anything less, it was just dumb luck. From now on, they'll know they have a right to magic.