One of New York's top chefs talks about cooking on Sept. 11, kitchen piracy and why food shouldn't be an intellectual experience. 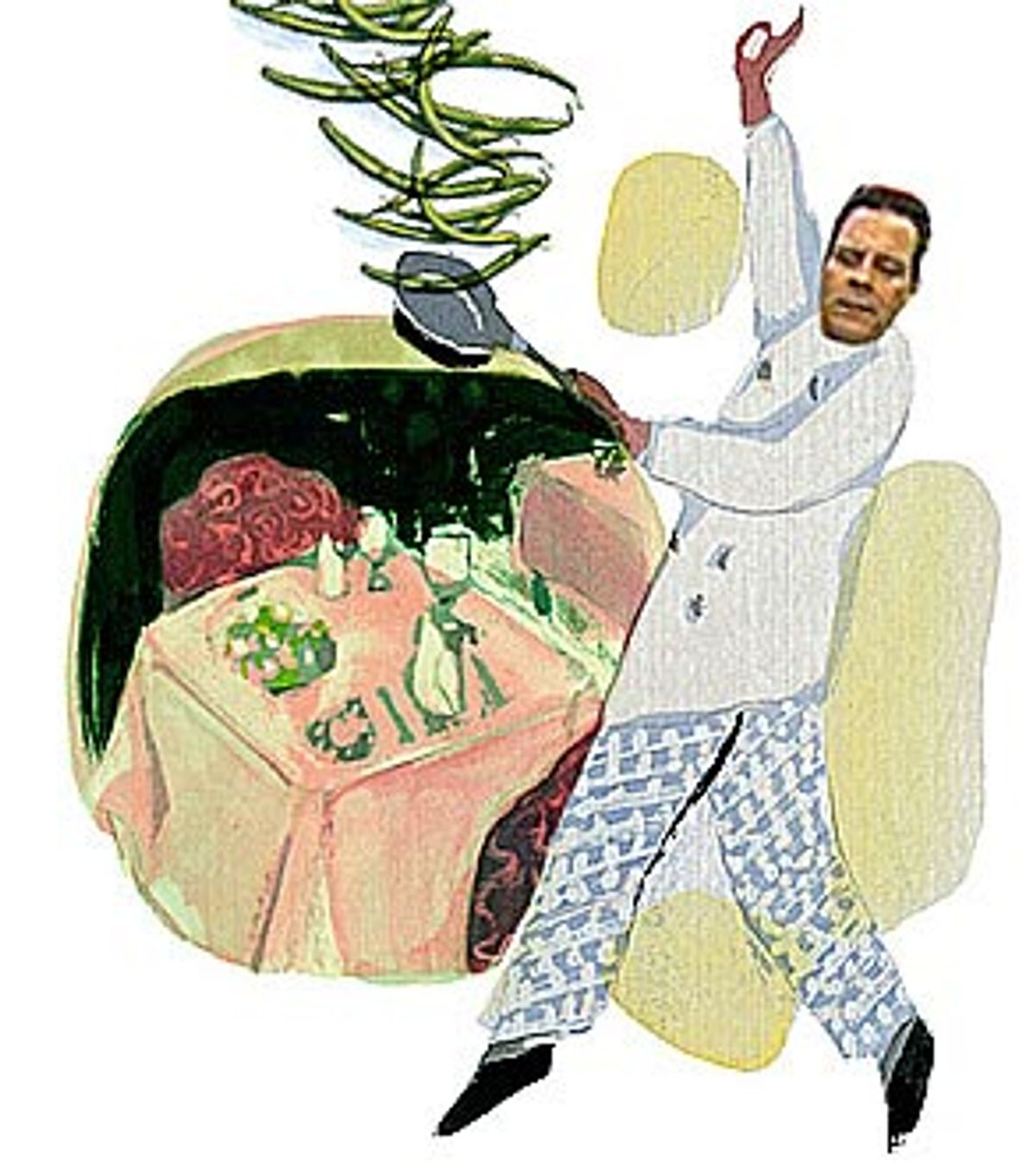 It's a weekday afternoon just after the lunchtime rush at Union Square Café, and chef Michael Romano has settled down in his office to talk when his intercom buzzes. "There's seven women at Table 31 who saw you on the 'Today' show and would probably squeal if you came out to say hello," a voice from the dining room says. "They're a little old for you, but that's life."

"All right, I'll be right out," Romano answers, returning to our conversation with an embarrassed chuckle. "You see? That's the best part of the job." Romano has his poker face on: Arguably the best chef in New York, he's a relatively quiet guy who would rather be in the kitchen making your dinner than out in the dining room shaking your hand. But he knows the importance of happy customers -- on Sept. 11 he devoted himself to them -- and he's not entirely unwilling to soak up a little adulation from the occasional tourist. "I do prefer the cooking over the socializing," he says, "but those people are so full of enthusiasm it makes it fun."

In 1971 Romano was a college dropout making desserts at Serendipity, the New York institution featured in the John Cusack comedy of the same name that was released earlier this year. Unsure of what to do with his life, with his parents pressuring him to get the kind of white collar job he found loathsome, Romano was introduced to James Beard, the father of American gastronomy. Beard told Romano that being a chef was not just glorified manual labor, but a noble pursuit capable of great artistry and adulation. It was a life-defining moment.

After cooking school and a 10-year stint in Europe that included tutelage under renowned chefs Michel Guérard and Max Kehl, Romano returned to New York to become the first American chef de cuisine at La Caravelle. Next he moved to the Union Square Café, where he has been ever since. Under Romano's watch, the restaurant has unequivocally become the most popular gourmet eatery in New York, recently ranked No. 1 for a record sixth straight year in the Zagat survey of New York restaurants.

And talk about serendipity: Thirty years after that meeting with Beard, Romano has solidified his position as one of the nation's foremost chefs by winning the 2001 James Beard Award for best chef in New York City. Not bad for a guy just trying to avoid a desk job.

You made the somewhat unorthodox choice to keep the Union Square Café open on Sept. 11? What was your reasoning?

I remember, as we were standing out in Union Square watching the towers burn and collapse, one thing that occurred to me -- besides the utter shock and terror -- was that I didn't want to close the restaurant. Members of my staff misunderstood, because they thought I just wanted to stay open for business. That wasn't it at all. We actually sent everyone home who wanted to go. But I didn't want people to come to the Union Square Café and find the door shut in those awful moments. I wanted to be there for the community. And that's what we did. We stayed open, and I cooked with whatever cooks were willing to stay with me. We just laid out food and the bar was open. Anyone who came in was told we weren't open for business but if they wanted to come in and have something to eat or drink, that was fine. There was no business transacted.

Everyone was dazed, of course. This was just a few hours after it happened. We had a guy who was on the 51st floor of the towers come in. He literally got out of the building, went home, changed, got his wife and came in to the restaurant. I don't know why, but he wanted to be in the Union Square Café. His wife was just hysterical, because she came so close to losing him. We also had some regulars and some out-of-town tourists who were just shocked and didn't know what to do. So we just tried our best to make everybody comfortable. We had a full bar of people eating and drinking, and eventually they moved out to the tables. We kept the food coming out. It was incredible, amazing.

What do you think of chefs' increasing cult of celebrity, which you've become a part of?

It's a good and bad thing. It provides a whole other dimension to this job, where talented people can express themselves on the air and gain the benefits of that. But it can be detrimental because I think it can distort for a lot of young people coming up what the goals are. These days people think a chef's job is real glamorous, that you do all these TV shows and hobnob with celebrities. That's not true. It's hard work. And you're working while other people are out partying. It's also a long, hard road to get there, to learn your trade and become good at it. And the other downside is that the food starts to appeal to a common denominator.

A different kind of celebrity chef, James Beard, had a big impact on your career.

I met with him briefly when I was still trying to figure out what to do with my life, and whether to stick with working in restaurants. Just a word of encouragement from him went a long way toward validating the idea that a career in food was worthwhile. I wasn't getting a lot of encouragement like that from my parents or anywhere else.

When you're cooking, what's your state of mind?

I like to be focused on what I'm doing without being distracted, except for maybe a little singing to myself. The food is talking to you while you're preparing it, and you have to listen.

How do you stay focused in a busy kitchen when there are millions of things happening at once?

It's hard, it's hard. Back in the days when I was on the line all the time, I was always being called away to talk to this person or answer that phone call, and it pulled my attention away. It used to drive me nuts. But it's inevitable. You have to just train yourself to bring that focus back. That's why sometimes it's fun to cook at home, because you can focus on a few things instead of a lot.

Do you do much cooking at home? Will you be making your family's Christmas dinner?

Actually, no. Over the holidays my brother-in-law does most of the cooking, which is nice. And in the old days it was my mother and my grandmother, who were great cooks. But I do like giving dinner parties.

What did you make for your last one?

I just did a dinner party out at my house for six people last Sunday. I did a soup from our new book, I did a beef Bourguignon, a cauliflower and potato gratin, and friends of mine brought the dessert. I like doing homey stuff like that. It makes people feel comfortable. And if you plan it right you can do a lot of it ahead. I had nothing to do at the last minute. Everything was ready to go, and it was delicious.

Is it true you once cooked on the Orient Express?

Yeah, it was really tough. The kitchen was tiny, and it was so dark you couldn't even see if the sauces were boiling. The stoves were coal-fired, so you had to constantly keep those going. Meanwhile the train is moving, and we had planned a meal that was just off the charts.

You were also on the winning team in a 15-country cooking competition in Tokyo.

We cooked for a week straight. I was very skeptical, because I thought Max [Kehls, the executive chef] was making a big tactical error. He used to do these beautifully decorated fish tartares from scallops, lobster and tuna. Now they are as common as a peanut butter sandwich, but in the early '80s not so many people were doing it. And here we are bringing raw fish into Japan, which I thought would be like bringing coal into Newcastle. But they loved it, and we won first prize in the hors d'oeuvre category.

Do you frown on chefs who create elaborate, architectural plates of food?

Everybody has their own style, and I'm fine with that. It's just that I've never wanted my food to be an intellectual experience. People should just enjoy it and feel comfortable with it.

Do you keep an eye out for critics?

If you know that reviewers are coming, it's always great to know who they are. But on the whole, there's nothing much you can do. You just do what you do and hope that it's going to be OK. The last time we were reviewed in '99, when we got our last three-star review from [New York Times' writer William] Grimes, nobody knew he had been there, but that made the good review all the more satisfying.

In "Kitchen Confidential," chef Anthony Bourdain describes a "pirate ship" mentality in the kitchens he came up in, full of rowdy, drinking and drugging crazies. Has that been your experience?

I had one guy at La Caravelle who used to go into the walk-in refrigerator and let out these blood-curdling screams. I guess it made him feel better. But somebody like that would not last here. Ever since Anthony Bourdain's book, people have this notion that all kitchens are totally psychotic places, but everyone is pretty sane here. Part of the process of getting hired here always includes an interview with me, and I tend to weed out those people. I don't like working with them.

You also worked for a long time in Europe, and those can be crazy in another way, more like fascism than anarchy.

Yes, it's a benign dictatorship -- and sometimes not so benign. Max Kehls had a very highly reputed restaurant in Zurich, where I was the chef de cuisine. He was very volatile. He spent a lot of time screaming, and sometimes people even got hit. I don't espouse those methods now that I'm in charge of a kitchen.

So how do you balance the classical way of running a kitchen with your own sensibilities?

I like the elements that are about quality and good work. I just don't agree with the people management style that was presented to me in Europe. I don't do things by intimidation or fear. I do it by example. I do it by interaction with people, treating them as individuals, and building consensus. It's a more American approach.

Speaking of America, we seem to have come a long way in appreciating fresh, seasonal ingredients. But have we come far enough?

No way. We've got a long way to go. Chefs are really in a position to influence public opinion and advocate the use of seasonal and organic produce. I also think the press has a role to play. One of the things that have often defined a great restaurant is that you can get anything any time of the year. That has to change. When a food writer reviews a restaurant, they should remark how odd it is that they're serving, say, asparagus in December. But by and large that doesn't happen. Because certain foods are available, people feel it's their right to eat it. But it's also a political act: By eating foods out of season, you're making a statement about whether or not these values are important.