Christmas presents for Rummy, Condi, Colin et al. -- but a big bag of coal for Ari! 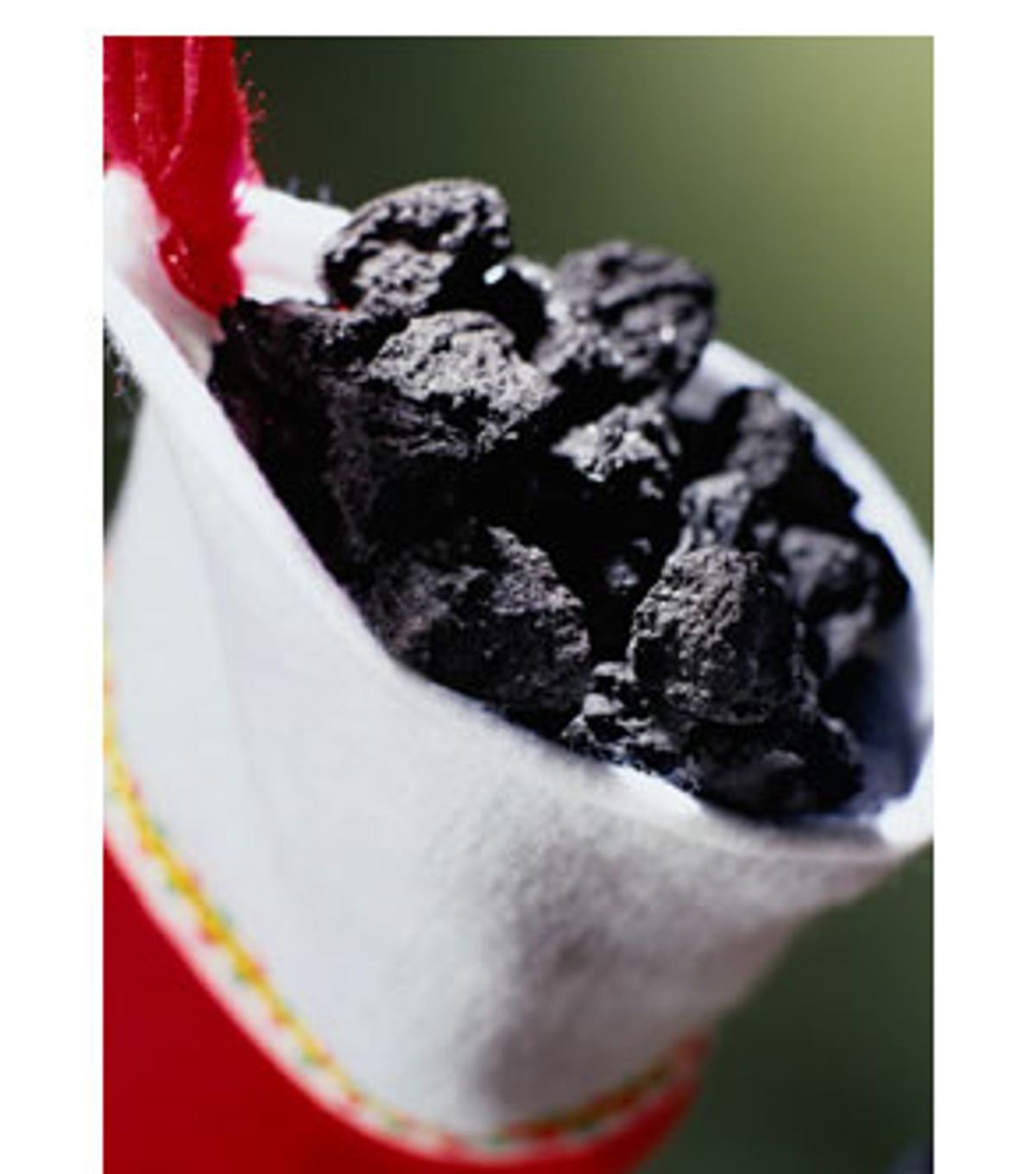 To: The President
From: Andrew H. Card, Jr., Chief of Staff
Re: The Season of Giving
cc: Karl, Karen

Ho-ho-howdy, Santa-in-Chief. As you know, every year at this time it's a White House tradition to begin doling out Christmas goodies to friends of the Presidency. Unfortunately, the storage closet at the 1600 souvenir shop is woefully understocked: In fact, all that's left from your direct predecessor is a blanket from The Black Dog and a stack of Whitman's "Leaves of Grass." But all for the better. I say we take a powder on the "official" stocking stuffers this year, and show off your rascally sense of fun by spiking the Administrative egg nog with a few gag gifts. I mean, it's not like we're going to put plastic poo on Ted Kennedy's mouse pad (Karen: Can we?), but maybe a few of these will tickle your Yuletide fancy:

RUMMY: A snow globe with a Tora Bora cave inside. The catch? When you shake it, the cave blows up. Priceless.

JOHN ASHCROFT: Something small -- like whatever's left of the First Amendment.

DICK: Specially recorded for the Vice President: A CD of Andy Williams singing "I'll Be [at a secure undisclosed location] For Christmas."

CONDI: (Still up in the air. No one knows what the hell you get someone for Kwanzaa. Karen: make some calls. If J.C. Watts doesn't know, bite the bullet and ask Jesse.)

ALAN GREENSPAN: A bag of those chocolate Hanukkah coins. It's a little late, but so were his rate cuts. (Any leftovers we give to Ari -- he's been pissy ever since the tree went up. Xmas envy, perhaps?)

VLADIMIR PUTIN: An official Department of Defense umbrella with a logo that reads: "Lil' Shield-ski." (Wolfie's idea -- isn't it a hoot?)

ARIEL SHARON: A copy of "How To Win Friends and Influence People" (Arab edition).

HAMID KARZAI: For the embattled interim president of Afghanistan, the one thing every leader needs to defend his election from hostile forces: Katherine Harris' phone number.

SADDAM HUSSEIN: An autographed picture of you and your dad. Both smiling. Inscription: "We know if you've been bad or good, so be good for goodness sake. Schmuck."

DICK ARMEY: A gold watch in honor of his impending retirement, with the inscription: "You'll always be the biggest Dick around." (Don't worry -- the Veep OK'd it.)

TOM DASCHLE: A Christmas card from the fourth grade class at the Greendale School in Franklin Park, N.J. (We'll get Karen's kid to address it. Karen: Can we?)

THE FOX NEWS CHANNEL. Just a thank-you note for its "unbiased coverage." We'll pin it to a slab of red meat. O'Reilly will howl.

ANDREW SULLIVAN: A portrait of Rudolph the Red-Nosed Reindeer. But we'll give him a brown nose.

ELIZABETH & BOB DOLE: For Liddy: help with her upcoming election. For Bob: help with his ongoing erection. (Karen: Can you?)

HILLARY CLINTON & CHUCK SCHUMER: The rest of their $20 billion bailout. In Enron stock.

BILL CLINTON: Jumbo postcard of the White House, inscribed: "(Bet You) Wish You Were Here."

OSAMA: Mistletoe. As in "cruise missile-toe." To all a good night, loser.