Scholar Fouad Ajami has garnered more prime-time airplay than any other commentator on Arab-Muslim issues. But critics say he's far from a representative voice. 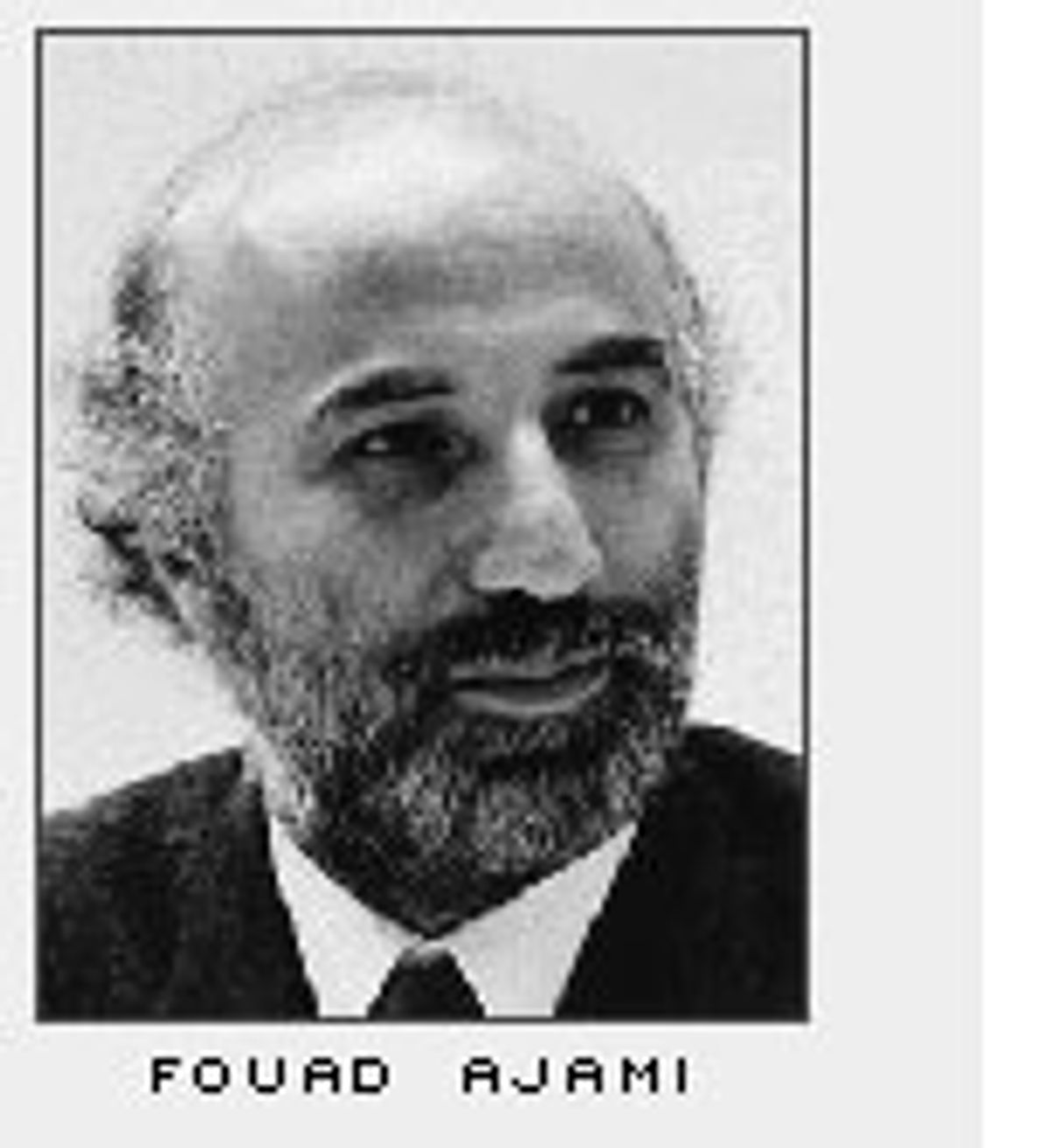 Once content to ignore foreign affairs, the American public has been trying to play catch-up since Sept. 11, eager to learn more about the Middle East, its politics, its people and its potential threat to the West.

Helping lead that collective teach-in has been the ubiquitous Fouad Ajami, esteemed professor of Middle Eastern studies at the School of Advanced International Studies at Johns Hopkins University.

The master of the trenchant sound bite, Ajami is also a prolific and poetic writer, author of such books as "The Dream Palace of the Arabs," "The Arab Predicament" and "The Vanished Imam," as well as a contributor to several influential American magazines. "My jaw drops when I read his writing," says Mort Zuckerman, publisher of U.S. News & World Report, where Ajami's work has appeared for years. "I think he's the most brilliant authority, with the greatest insight and greatest historical knowledge of the Arab mind-set, in this country."

Ajami has also become that academic oddity: a serious scholar who has crossed over into the mainstream. An electronic database search on Nexis-Lexis retrieves more than 150 Ajami news mentions since the terrorist attacks in New York and Washington.

It's Ajami's TV appearances that have catapulted him to prominence. Signed on as a news consultant for CBS in the mid-'80s, Ajami has been a constant presence on the network, appearing with Dan Rather and others to comment on all things Middle Eastern. Over the years he's also been a regular guest on PBS's "Charlie Rose" as well as "The NewsHour with Jim Lehrer." It's safe to say no other Arab scholar has accumulated as much prime-time airtime as Ajami.

"I find him to be a walking encyclopedia of knowledge," says Al Ortiz, executive director and director of special events for CBS News. "He's articulate and versatile. He can discuss religion, politics, economics." (In 1982, Ajami won a MacArthur Fellowship, or so-called genius award.)

But Ajami's ubiquity irks many colleagues in the world of Muslim and Arab studies, who have long criticized his views as highly unrepresentative of the field. These critics see him as a distinct outsider whose dark vision of the contemporary Arab world and tendency to avoid criticizing Israel are not shared by many of his colleagues. (Ajami did not respond to several phone requests for an interview.)

As the Los Angeles Times pointed out in 1998, "No Arab intellectual has made himself so cordially disliked by his peers" as Ajami.

That cordial dislike has been exacerbated in recent months simply because the stakes have been raised, as has Ajami's profile. While network and cable bookers have expanded their Rolodexes to find much-needed Arab and Muslim commentators, Ajami still seems to dominate the media landscape, sounding at times more like a CIA operative than a student of Arab literature. ("We want to go into this campaign, mop it up, and get out as early as we can," he told CBS News last month.)

In his writings, the Lebanese Shiite Muslim, who came to America in his youth, routinely paints an unflattering picture of a shadowy, almost decrepit, Arab world. It's one where hatred, or "poisonous rage," for America runs deep because "of our success, of our secularism, of our movies." It's where post-World War II intellectuals, embracing pan-Arab nationalism, failed to lead their culture to modernity, or embrace the idea of peace.

More recently, Ajami has stressed American leaders shouldn't waste their time or resources trying to engage Arab public opinion, because the Arab street is "just a con," unwilling to change its ways.

While his critics acknowledge that Ajami is a serious scholar and his unflattering take on the Arab world is not without merit, they take issue with what he chooses to emphasize -- and, in a larger sense, with the fact that his perspective is given pride of place over others. "I think most of the time what Fouad Ajami does is tell an American audience, and very often a Jewish American audience, what it wants to hear about Arabs," says Hussein Ibish, national communications director of the American-Arab Anti-Discrimination Committee. "Much of the American media knows what it wants to hear and it's very reassured to hear confirmation of received wisdom."

"What he is, is somebody who doesn't quite like the [Arab] region, and the people, and the politics," says James Zogby, head of the Arab-American Institute, adding that "he's entitled to his opinion."

"He has catapulted into prominence because of his basic willingness to deconstruct legitimate Arab positions in public opinion here," adds Clovis Maksoud, former ambassador of the Arab League to the United States and to the United Nations. "He fits into the perception, held by a large segment of the Arab-American community, of a self-hating Arab."

Defenders such as Martin Peretz, editor in chief of the New Republic, where Ajami's work has appeared for two decades, dismiss the charges. "He is a true Arab. He's not ashamed to be an Arab. The joy with which he reads Arab poetry and translates it for his friends is authentic and powerful."

Peretz also disputes the accusation that Ajami simply parrots the establishment's stereotypes about Arabs, insisting instead that Ajami actually says what it doesn't want to hear. "The American media elite, the New York Times, the Boston Globe, they don't want to hear that there's little hope in the Arab world for democracy, modernization, transparency, or respect for science. They want to hear there's a Martin Luther King just around the corner in Islam," says Peretz. "Ajami has an allergy to the orthodoxy of the day."

"I think it's an academic's job to call shots as he sees them," says Walter Denny, professor of art history and Middle Eastern studies at the University of Massachusetts. "Ajami probably doesn't relish holding this point of view. But if he's doing it out of a sincere belief, then you have to respect his courage." (Personally, Denny finds Ajami's pessimism "depressing," an opinion echoed by the journal Middle Eastern Policy, which found "The Dream Palace of the Arabs" "excessively bleak.")

As with so many Middle Eastern feuds, Israel plays a prominent role in this quarrel. Critics suggest Ajami gives Israel a free pass, refusing to factor the country into the Arab world's modern-day dilemma. Defenders say Ajami, unlike so many Arab thinkers, simply is not obsessed with the topic of Israel and sees Arab shortcomings for what they are.

"Some folks in the Muslim world are very tired of the refusal of Arabs to come to grips with their own culpability. Dr. Ajami is one of them," says Aminah McCloud, professor of Islamic Studies at DePaul University. McCloud characterizes Ajami's position as "Arabs need to stop blaming the world and look at your own house," which she says is "a very valid opinion." But, she adds, "you cannot let everybody else off the hook and just throw it in the lap of the victims."

"Essentially Fouad has taken the position that the Arab world is a mess and Arabs have nobody to blame but themselves," says Ibish. "I could go halfway, or even three-quarters, of the way with him on this. But he refuses to recognize ways that Israel has created trouble as well. His analysis never challenges Israel."

"Arabs are angry. Not hateful, but angry. They have grievances which have been unaddressed," notes Maksoud. "Ajami never articulates them. An authentic intellectual has to articulate grievances and aspiration in rational discourse. Not echo conventional wisdom."

Zuckerman calls that sort of criticism "nonsense" that "people make up if they want to diminish the clarity of what Ajami writes."

But as Denny points out, "Zionists are very fond of quoting Ajami about things like how dishonest Arabs are. And that's one of the reasons [colleagues] are uncomfortable with him, there's a feeling he's giving ammunition to the enemy."

Certainly not many Arab scholars come to mind who have drawn the effusive praise of conservative writer and staunch Israeli supporter Norman Podhoretz. Podhoretz recently commended Ajami for being "almost the only Arab in the whole world courageous enough to speak the truth about the region from which he comes."

Peretz, who like Zuckerman is a vocal supporter of Israel, says the obsession Ajami's critics have with the Jewish state "exposes their motives." According to Peretz, "Israel is their alibi. It is a useful way of diverting the Arabs' attention from their own problems. I don't think Fouad thinks Arabs are victims. He thinks they're actors, actors in history who can make their own choices. And the notion that Israel is more important or has been more central for the Arab world in the last few decades is preposterous."

Israel is not the only flash point. More recently, it was Ajami's 6,000-word piece on Al-Jazeera in the New York Times Sunday magazine, entitled "What the Muslim World Is Watching," that rankled many in the Arab studies field.

Western observers had been leery of the influential Arabic-language news channel, with detractors criticizing the news channel for its pro-Arab, anti-American and anti-Israeli bias. Ajami echoed that judgment and went further, writing that Al-Jazeera was not just lacking journalistically but that its coverage was "incendiary," "opportunistic," "inflammatory," "shameless," manned by "nationalists of a leftist bent," and that it "deliberately fans the flames of Muslim outrage." The bottom line, wrote Ajami, was that "Al Jazeera's virulent anti-American bias undercuts all of its virtues. It is, in the final analysis, a dangerous force." Ajami amassed some clear evidence in support of his claims, including the fact that the station calls Muslim suicide bombers "martyrs."

To his admirers, it was classic Ajami: telling the hard truths that other Arab-born scholars won't. "He has shown great courage holding to his convictions," says Zuckerman.

To his foes, the Al-Jazeera story was also classic Ajami: a sledgehammer critique of all things Arab, and one that did more to ingratiate him to America's media establishment than it did to help readers here understand the complexities of the Middle East.

"I think the article went over extremely well with the American media," says Ibish at the American-Arab Anti-Discrimination Committee communications. "Most of them don't understand Arabic, but Ajami provided them a set of criticisms that reaffirmed the idea that Al-Jazeera is run by an extremist group of fanatics and hostile toward the United States."

In the end, Ajami's vocal critics don't so much condemn Ajami's findings as argue that by showering him with so much attention, the media presents a distorted picture of how most experts perceive the Arab world.

"The United States media is giving its audience a misleading view of what mainstream Arab scholars say," says Hafez Al-Mirazi, the Washington bureau chief for Al-Jazeera. "I don't see many Arabs with that much access unless they're willing to reinforce old stereotypes."

Arab and Muslim observers suggest Ajami's prominence simply highlights how far they have to go in making a real impact on the media's public debate. "There's not a single Arab or Muslim-American committed to Palestinian rights who's got a column in any newspaper, even a small newspaper," says Maksoud, now professor of international relations at American University.

"Dr. Ajami is clearly very bright. He writes extremely well and he has a great deal of insight into the Middle East," says DePaul University's McCloud. "But on these television programs there is not a conversation between diversity of Muslim opinion. I say don't exclude Ajami's voice, but don't make it the only one."