Ron Howard and Russell Crowe team up to produce a very dumb movie about a very smart man. 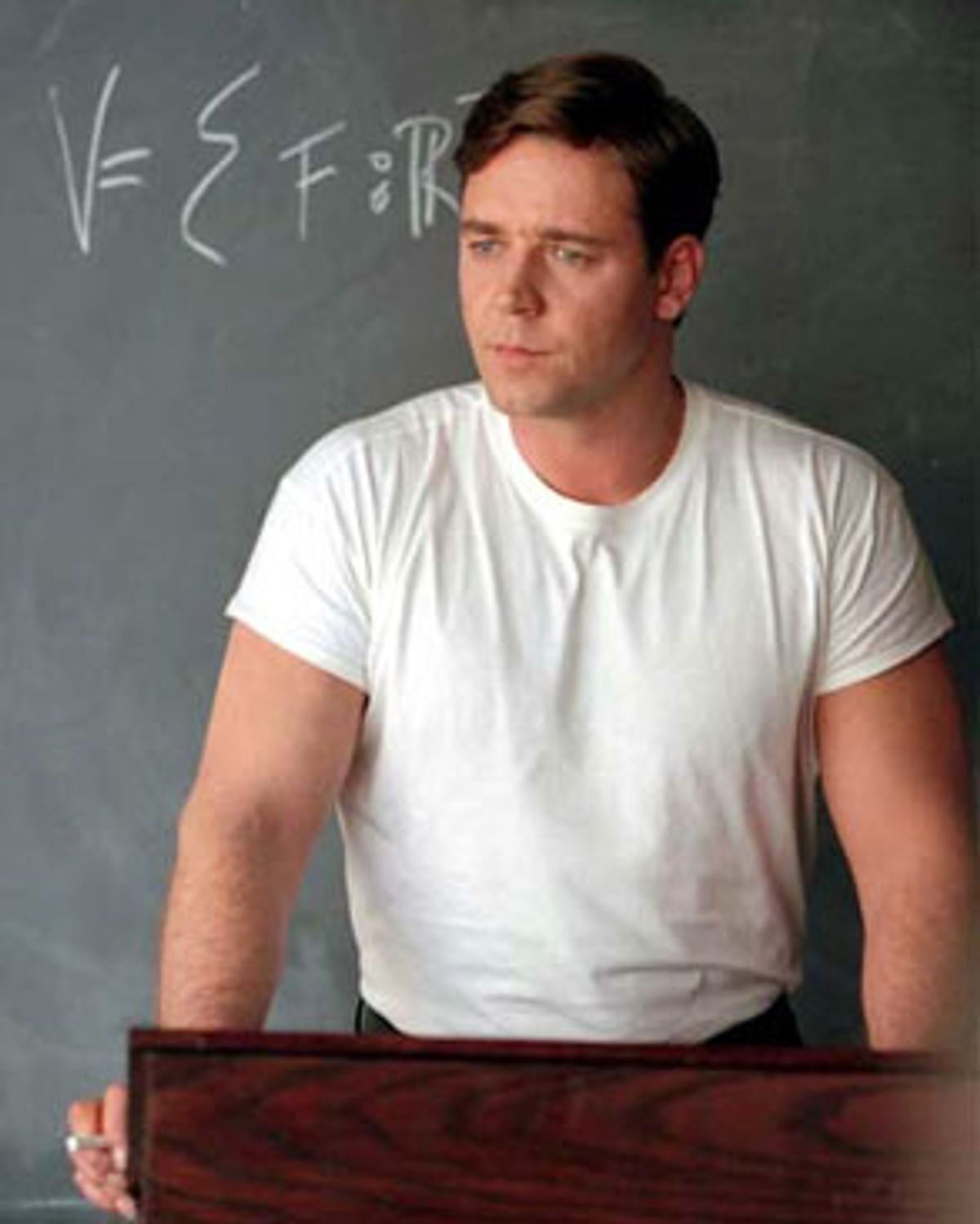 "A Beautiful Mind" is a film for everyone who longs to see Russell Crowe in "Flowers for Algernon." It's a tortured-genius movie, and Crowe lives down to the conception with a performance that is possibly the biggest load of hooey to stink up the screen this year.

When actors take on the role of a genius or a crazy person or a mentally handicapped person, they're practically inviting temptation. There's no way of knowing what goes on in the mind of a genius, and it's damnably hard to find a way to make sense of a schizophrenic's view of the world. So actors often resort to impersonations, ladling on odd, eccentric mannerisms because they can't get inside the characters. (That's what Dustin Hoffman did in "Rain Man.") In the case of genius roles, the most common method performers adopt is to writhe under the burden of the greatness they're trying to extract from their outsize brains. Some actors get to do both: Geoffrey Rush in "Shine," for one, and Russell Crowe here.

John Nash, the MIT mathematician who won a 1994 Nobel Prize in economics after emerging from years of schizophrenia, is both a genius and a crazy person. And Crowe, sniffing out an opportunity the way a hound scents a hare, sets off. Watching his performance is like going to some dog track where the mechanical rabbit has been replaced by an Oscar.

Crowe doesn't miss a tic. He clumps along in big boxy suits like someone who's just learned to walk; he shifts from side to side; he mutters to himself or speaks in a husky, vaguely courtly Southern accent; he keeps his head down when talking to others as if he could will his whole cranium to disappear into his chin dimple, like smoke into a genie's lamp.

And that's just in the opening scenes at Princeton. When Nash starts to come apart, Crowe gets to sweat and gibber and cower and drool and pop his eyes, he gets to flip his body like an electrified fish as Nash is institutionalized and given insulin shock treatments. It's a prodigious display -- the Stations of the Cross as an acting decathlon.

It's a performance I would have thought Crowe incapable of giving. Through it all, there's no sense of what's going on inside Nash. Crowe has made the classic mistake of acting emotions (or mannerisms) instead of objectives. The performance is conceived in terms of a show rather than an exploration.

Nash was a particularly driven man. He disliked reading, feeling that it stifled creativity. In her biography of Nash (also titled "A Beautiful Mind") Sylvia Nasar relates that as a first-year grad student at Princeton, he was coming up with a series of complex and important mathematical ideas. These ideas had already been elucidated by other mathematicians; amazingly, Nash had come up with them with no knowledge of his predecessors' work. And so Nash became more determined to come up with an idea that was all his. But Crowe doesn't play Nash as a man trying to prove himself an original thinker so he can win the attention that his withdrawal keeps him from finding socially. He plays the desperation that arises from that desire. In other words, he's put the cart before the horse.

But he's right in tune with the movie that director Ron Howard and screenwriter Akiva Goldsman have conceived. It's not particularly dishonest that Goldsman's screenplay, allegedly based on Nasar's book, telescopes Nash's various stays in mental hospitals, most of them involuntary, into one incarceration. It might grow wearying (and dramatically inert) to watch a character being repeatedly committed. But the movie's contention that Nash chose to suffer bravely so he could continue his work rather than be incapacitated by medication and shock treatment converts his eventual emergence from schizophrenia (a mystery for which no one seems to have any certain explanation, and a very real, and hard-won triumph) into a movie cliché about the unconditional indomitability of the human spirit.

In 1996, Nash, who has found it difficult to work since his recovery, was introduced to an audience of psychiatrists in Madrid as "a symbol of hope." He told them, "To recover rationality after being irrational, to recover a normal life, is a great thing! But maybe it is not such a great thing. Suppose you have an artist. He's rational. But suppose he cannot paint. He can function normally. Is it really a cure? Is it really a salvation? ... I feel I am not a good example of a person who recovered unless I can do some good work, although I am rather old." Goldsman and Howard are like two members of the audience who heard the introduction and proceeded to ignore everything Nash had to say.

In this type of inspirational moviemaking, a conditional triumph is no triumph at all, and a complex or unlikable hero is unthinkable. Goldsman and Howard have expurgated everything about Nash's bisexuality and the fact that he fathered a child out of wedlock. His wife Alicia (Jennifer Connelly) stays faithfully by his side in the movie. We aren't told that, though Alicia did shelter him and though they are still together, she divorced him in 1963.

We aren't told that their son, also a gifted mathematician and also schizophrenic, has suffered as his father did, living a life often divided between rootless wandering and institutionalization. And there is nothing of Nash's plain unpleasantness: his racism, his snobbery, his history of violent behavior toward others. Of course, none of these things lessens Nash's accomplishment, diminishes the originality of his ideas or makes his emergence from mental illness any less remarkable. But, by omitting them, the moviemakers are signaling that think they do. And they're implicitly saying to the audience that we can't be addressed as grown-ups.

That seems to be why Goldsman has come up with a spectacularly dumb device to tell the story of Nash's descent into madness. (If you're not familiar with Nash's story, you may want to stop reading here.) One of the first manifestations of Nash's schizophrenia was his belief that aliens were sending him secret coded messages through the New York Times and over radio stations. (He also, at other times, attempted to renounce his U.S. citizenship, and traveled to Europe believing he was a secret religious figure chosen to be the Prince of Peace.)

In the movie, Nash is contacted by a shadowy government agent (Ed Harris, dressed up like Dick Tracy) who tells him the Soviets have planted sleeper agents throughout America and that the agents are receiving coded messages in various periodicals instructing them on destroying the U.S. in a nuclear holocaust. It's the setup for a "Sixth Sense"-style switcheroo; Harris and the messages Nash circles obsessively in newspapers and magazines are all part of his hallucination. (Ron Howard must have amazing powers of persuasion. I'd love to have been in on the negotiations where he convinced an actor of Ed Harris' stature to play a hallucination.)

Before we learn that, Howard gets to stage a car chase and shootout with Harris and Crowe being pursued by foreign agents. Were Howard and Goldsman afraid that without this cheap espionage subplot to snooker the audience, Nash's story wouldn't be interesting? Essentially, they pass up the chance to delineate how the workings of John Nash's mind were bent toward a schizophrenic delusion in favor of providing some easy thrills for the audience.

And if you're going to have someone stoop that low but still maintain the air of a holiday prestige release, then Ron Howard's your man. He directs in his usual impersonal, "important" style, substituting the surge of big emotional moments for any sense of storytelling coherence or rhythm. "A Beautiful Mind" throws you into the story before giving you your bearings and expects you to immediately start reacting to the buttons Howard pushes.

Nash's eager young Princeton classmates assembled in the university's wood-paneled walls are meant to evoke eager youthful ambition, no matter that Howard barely distinguishes one from the other. We read Nash's decline from the fact that he stops shaving and the surroundings get shabbier. The movie tells us nothing about Nash's work (we're just meant to see he's brilliant), or his influential refocusing of game theory on the individual rather than the group.

Nasar writes that Nash introduced the concept of mutual gain into game theory, hypothesizing that "the game would be solved when every player independently chose his best response to the other players' best strategies." It's clear why that theory has had so many ramifications in economics, which is subject to a multitude of players and factors. Perhaps the filmmakers surmised it would be too difficult for audiences to grasp. And truth be told, we wouldn't have to know anything about Nash's work to be moved by his story. But couldn't Goldsman at least have included a short speech or even a few lines about Nash's great accomplishment? It's hard to credit Nash's reemergence when we haven't been given an idea of what's been lost.

There is one genuine reemergence in "A Beautiful Mind" and that's Jennifer Connelly, who is touching as Nash's doggedly faithful wife, Alicia. After being relegated to junk movie roles, Connelly has been doing good work for a few years now, in "Waking the Dead" and in last year's "Requiem for a Dream." This, though, is her reentry into the mainstream, and it deserves to be the start of wonderful things for her. Connelly has a knack for responding to a moment with all her emotions while retaining some semblance of composure (the same way she seems on her guard when Nash is wooing her), and that contrast provides the only honest emotion in the movie. It takes a great deal of talent to seem real in a movie as fundamentally dishonest as this one.

"A Beautiful Mind" is a typical example of Hollywood's chickening out on chancy material, softening the edges of a story and characters, and shoehorning things into a tidy inspirational package. And it's the type of movie that invariably gets people who don't respond to it accused of being heartless. But before the usual charges of cynicism get hurled, I'd just ask that one thing be kept in mind. Unlike "Flowers for Algernon" or "Rain Man," this isn't some concoction. It's the story of a man's life. It's not just our emotions that are being played on here, it's not just our intelligence being insulted because of Ron Howard and Akiva Goldsman's presumption that we won't have any interest in a character whom it's not always possible to like. It's John Nash's life, being turned into an Oscar machine and an easy way to jerk tears.