When Jesse Jackson tried to turn pampered professors into racism victims, it showed a civil rights movement unready for a new age. 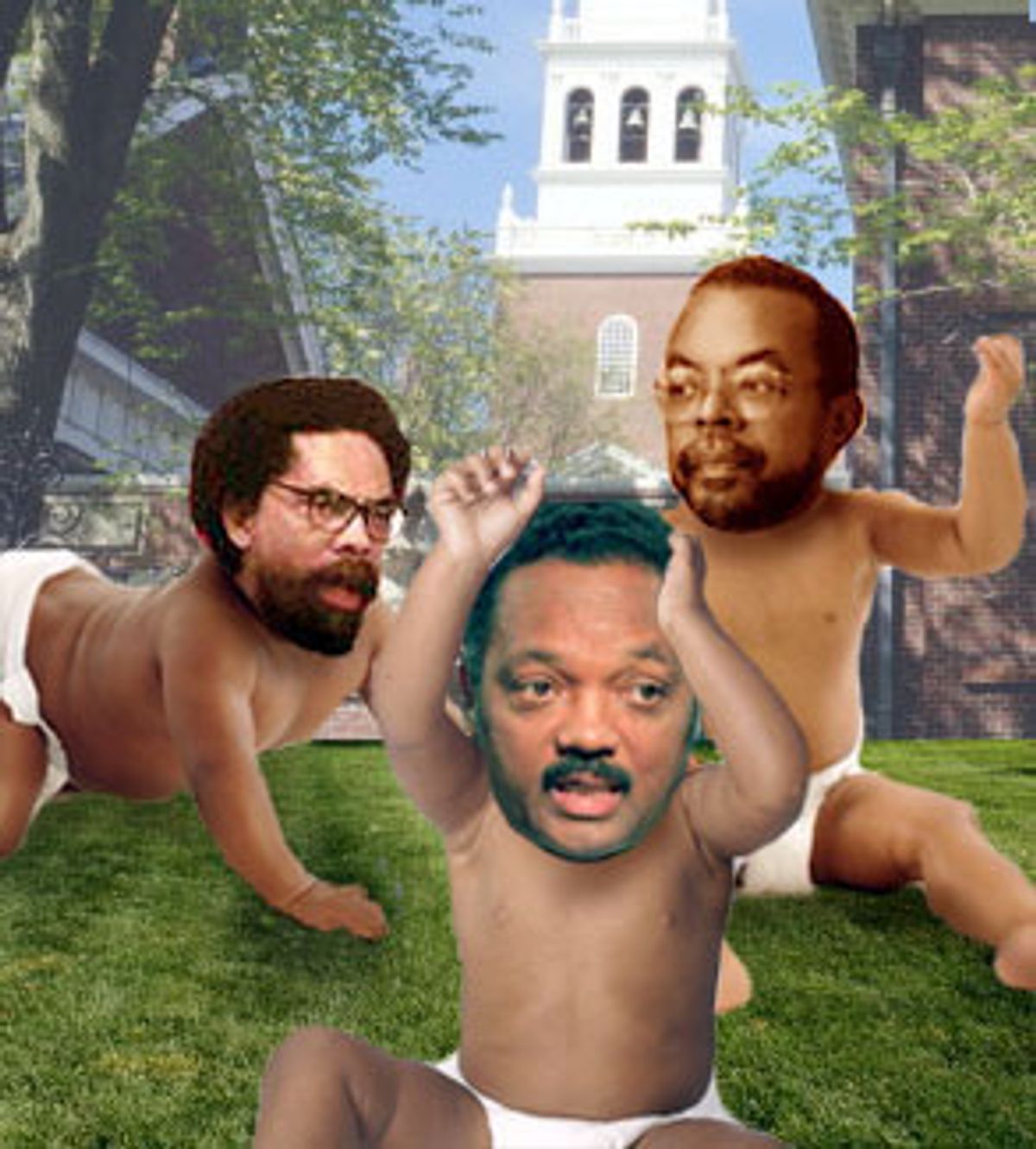 Here's one for the books. A privileged black professor at a prestigious Ivy League university spends much of his time writing pop intellectual books, cutting rap CDs, and globetrotting around the country bagging stratospheric speaking fees to pontificate on the state of black America. The president of the university in question, frustrated at these antics, has the temerity to suggest that the professor do what he's paid to do, namely teach, read and grade student papers, be a mentor to students, and not simply ladle out A's for merely showing up for class -- a problem, it should be noted, that's rampant at this prestigious university, not confined to this august professor. (They euphemistically call it "grade inflation"; in the old days we'd have called it professor-assisted cheating.)

The university professor is so "insulted" that the president would question his academic performance that he threatens to pack his bags and go to another prestigious university, which is also bidding for his services. Then the piqued professor's department head gets involved. He takes umbrage at the president's "insult" to his underling, and strongly hints that the president's suggestion that the professor live up to his professional billing and improve his teaching performance is really a sneak attack on the school's affirmative action program. Both professors, as well as a third colleague, make it known they are considering other offers from other Ivy League universities.

Never mind that the African-American studies department at the university in question is one of the oldest, best known and most generously funded in the country. Never mind that both outraged professors are routinely touted in the media (the department head has carte blanche to discourse in the New Yorker and New York Times on black America's plight), wined and dined by foundations, fawned over at universities, and courted by top politicians and business leaders. Never mind that neither the university president or board of regents has fired or laid off any of the program's staff or faculty members, cut its funding, or even so much as restricted their use of the copy machine.

Never mind, in short, that there was absolutely no civil rights issue at stake in the clash between Harvard University president Lawrence Summers and showboating professor Cornel West, which even in wartime managed to make national headlines over the recent holiday. Things came to a head New Year's Day -- a bad omen for the civil rights movement in the next 12 months -- when Jesse Jackson entered the fray. Black America's top race man sniffed a chance to grab a headline, and tried to turn the in-house troubles of Harvard University into a race war. He rushed to Cambridge, flanked himself with a handful of local activists, and saber-rattled, threatening Summers with barely veiled hints of protests and boycotts unless he ceased his scrutiny of West and Henry Louis Gates' Afro-American studies department, and demanded as penance that the university convene a national conference on racial justice and action.

Now, according to the New York Times, the battle is over. Summers has mended fences with his two black stars, and they're no longer talking about moving to Princeton, one of several universities said to be bidding for their services. Still, the point was made: Question the performance of top black professors, and you'll have to back down. What was at most an ivory tower squabble became a civil rights battle, and if it sounds like racial correctness once more gone amok, it is.

After all, we're not talking here about a fight over real issues such as police abuse, failing public schools, the HIV/AIDS crisis, drugs and gangs, or criminal justice system disparities that plague poor blacks. We're not even talking about a university balking at giving resources to black students, black professors or black studies. It's not even clearly a fight over academic freedom or free speech, as West hinted it was. He says that Summers chided him for supporting Al Sharpton's phantom presidential campaign; Summers denies it.

The whole embarrassing spectacle deserves national attention, but not for the reasons Jackson, West and Gates believed. First of all, it's worth noting that most ethnic studies departments were created via protest, and however worthy their scholarship, ever since their establishment in the late 1960s and early 1970s, many have protected their turf from valid scrutiny and criticism by crying race when administrators raise reasonable questions.

And while many professors are rigorous, there have been problems with grade inflation in some ethnic studies departments across the country, not just at Harvard. One of the saddest stories came from the University of California at Berkeley last year, where the vice president for minority outreach was fired after giving two athletes who never took his ethnic studies course credit for it anyway. Too often, ethnic studies departments have been protected from accountability by leaders who play the race card, either for personal gain or to protect mediocrity or incompetence. Now Harvard's Latinos are demanding a center for Latino studies. Summers will have his hands full, even if the Gates/West brouhaha has really calmed down, for now.

But even more important, this tempest in the ivory tower reflects the fact that most American civil rights leaders appear to be running on empty as they try to advance an agenda to protect the poor and minorities in a post-Sept. 11 America presided over by a wildly popular President Bush. Black leaders like Jackson seem lost in the face of a GOP president now supported by many blacks (though few voted for him); a black community that backs racial profiling of Arab and Muslim Americans even more strongly than whites do; a stubborn recession that's costing blacks jobs; and Democratic allies who couldn't muster support for a fair economic stimulus plan. It's a hell of a lot easier to harass Lawrence Summers than to identify the real cutting-edge civil rights issues in a very changed America, and go to work on them.

The saddest thing of all is that this silly brouhaha fits in with a shopworn pattern: Whenever a black politician, preacher, or in this case a spoiled-brat professor, is called on the carpet for misdeeds or failings, many blacks instantly circle the wagons, turn the tables on their accusers, scream racism, and spin dark tales of white plots and conspiracies to nail them.

That was certainly the case with Jackson, when the news broke that he had fathered a child out of wedlock, kept a mistress, and was accused of paying her hush money to shut up about it. We then saw the sad and pathetic spectacle of black elected officials, civil rights leaders, community activists, and people on the street parading before the cameras offering prayers and pleading for understanding and forgiveness for Jackson. Some even stood Jackson's profligacy on its head, and praised him for publicly admitting it. Jackson seemed so emboldened by the public outpouring of support that a self-imposed sabbatical from public life, needed, he said, to heal his family, lasted only a weekend.

And it is also the case with West. He has, in fact, sacrificed rigorous scholarship for pop-culture acclaim, and Summers was within his rights as Harvard's president to raise questions about that. Harvard named him a "University Professor," its highest faculty post and a title held by only 14 of its 2,200 faculty members, and such status no doubt demands even higher achievement than normally expected. West and Summers may disagree; the popular academic is free to peddle his wares elsewhere. He has at least two of the nation's top universities vying for his services -- Princeton has wanted him back since Gates lured him to Harvard to build his African-American studies "dream team" in 1993. Since the spat became public Summers has insisted he wants dearly to keep him. The two men's personal troubles are not political. To their credit, many in Harvard's Afro-American studies department are said to be embarrassed at the fact that a bidding war between Princeton and Harvard has been depicted as a civil rights struggle.

But whites are to blame, too. Wayward black public officials and celebrities get away with their abuses because many whites regard blacks as so far outside the political and social pale that they don't have to bother to see them as anything other than a racial monolith. White America is profoundly conditioned to believe that all blacks think, act and sway to the same racial beat. They freely use the words and deeds of the chosen black leader as the standard for African-American behavior. When the beleaguered chosen one makes a real or contrived misstep, he or she becomes the whipping boy among many whites, and blacks are blamed for being rash, foolhardy, irresponsible and prone to shuffle the race card on every social ill that befalls them.

The problem is, too often the race card works. Jackson, Gates and West masterfully played the card at Harvard. And it paid handsome dividends for them. Jackson got yet another chance to media grandstand, and a much-needed boost in his frantic quest to reclaim his tarnished throne as black America's exclusive mouthpiece. West and Gates almost certainly will get an even sweeter deal to stay at Harvard. This was indeed one for the books.