After her strokes, my grandmother is still here. But what is left is base behavior and compulsion, unleavened by charity, kindness or faith. 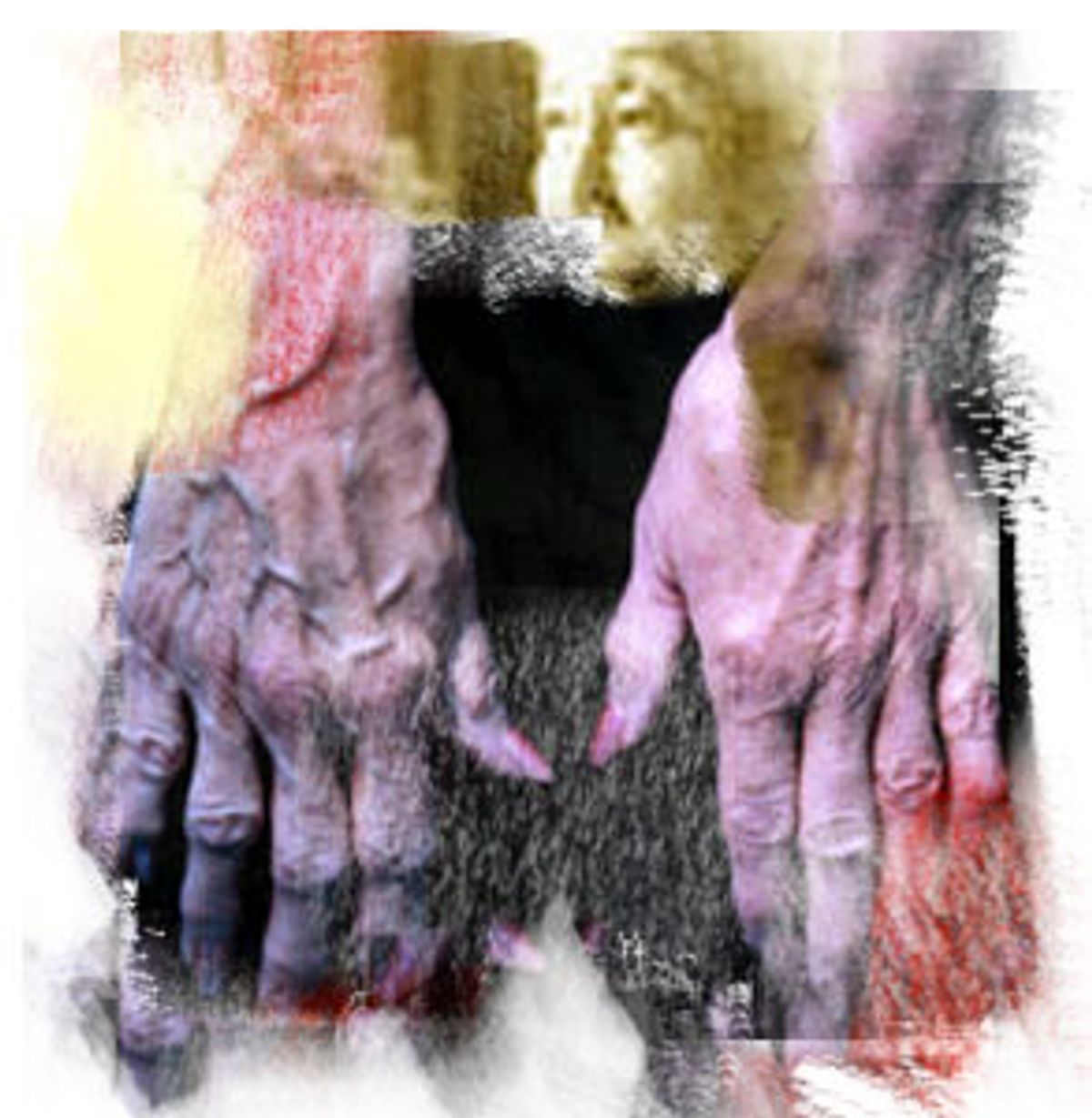 The Estates of Ft. Lauderdale aren't really estates, nor are they in Ft. Lauderdale. They are a neatly plotted collection of well-maintained mobile homes that were recently annexed into the city of Dania Beach, Fla. It is where I grew up, with my mother, my two sisters and, just one block away, my maternal grandparents.

My son and I enter the only home I have ever known, the one I remember clearly from my childhood, and my grandmother is walking down the hallway in two shirts and no pants. She looks slightly disoriented, but you can tell she is in a good mood today. Her legs look boneless and all wrinkled skin, hanging loosely from the skin at her hips which hangs loosely from the skin above that. We tell her to go put some pants on, and she reemerges 15 minutes later, with a different shirt on over the ones she was already wearing, but still no pants. Eventually, she will get them on and we will go for our daily breakfast.

When we return, my grandmother drifts slowly down to her bedroom, where she does mysterious things that I can only guess at, moving objects from here to there, folding and refolding her sweaters, moving her money from one hiding spot to another. Today, she comes back holding a full bottle of small white prescription pills, a rubber band and her toothbrush.

In the two years since her stroke, I have grown accustomed to this erratic and odd behavior, which turns out to be not so unusual for stroke victims. But it is odd to me, since she was the domestic anchor of our family for so long, the stereotypical Italian grandmother. As with most immigrant Italian families who can still find their names on the Ellis Island wall, our family was headed by a matriarch who cleaned, cooked and took care of the children. When my father left us, and my mother had to work to support us, my grandmother watched my younger sister and me day after day.

Now it is hard for me to visualize the grandmother who helped raise me, who taught me how to cook and clean; I can't remember how she used to be. I see "before" pictures and just as she does not recognize her new, poststroke face, pointing at herself in recent photographs and saying, "Elsie" (her name is Nicolena), I do not recognize her old one. I moved to California for four years, and her strokes occurred during this period, so there was a disjunction. When I left she was my Italian grandmother, apron securely fastened. When I returned, she was a shrunken remnant of her former self.

Though I am not blood-related -- my kinship comes through adoption -- all the women in my family have some part of my grandmother running through our veins. She is imbedded in our systems, and my mind is rampant with memories. I cherish my recollections of her getting her hair styled and set each week. She was of the old school, with a high bouffant that she picked each day and wrapped each night before bed. As the week progressed, she'd get a slight bare spot near the back of her head, and I would stare fixedly at it each day as I watched it get bigger and bigger.

One of my most vivid memories, documented by an old Polaroid snap, is of my grandmother getting tipsy from rosé table wine, a mainstay at our dinners. I caught her singing in her high soprano, dancing with her arms above her head, a goofy and endearing grin on her face. She taught me all the card games that I know. I was content, all through my teenage years, to stay at home and play Continental, Michigan Rummy or Gin with her, rather than go out.

The history of my grandmother's disease goes something like this: She suffered a few transient ischemic attacks, or TIAs, before her big one, the hemorrhagic attack that killed part of her brain and forced doctors to remove a section of it. Diagrams in an American Heart Association (AHA) pamphlet, which I suppose are given out to comfort and inform family members, show a brain overlaid with labels for the various control zones. Sight here, hearing there. But it leaves out something that I've come to identify over the past two years since I've been back, that part of her we most miss: her soul.

The doctors removed only a portion of her brain, along the frontal lobe, which had been damaged already by the hemorrhaging and, according to the AHA diagrams, controls speech. They might attribute certain changes in behavior to strokes, a form of vascular dementia, but the real truth is, her soul has been blighted and all that is left is behavior and compulsion. I have become convinced that our physical brain, and the sentience it allows, is much more than a sensory organ. It has evolved beyond that. It directs and guides our chaos of emotions and passions into productive, empathetic, creative avenues. For lack of a better word, it is soul.

The removal of that part of her brain also took away her most beneficent attributes, her charity and kindness and faith, and left them as transient ghosts that appear every once in a while, and less and less over the years. What became more prominent is what I consider to be her base behavior, what she most likely was born with and exhibited as a child, only flavored now with years of experience. She is an amalgam of obsessive operations, like a series of slow-going ticks, collected over a lifetime. She hoards money, she habitually cleans up and throws away perfectly good items, she continually applies lipstick. If we start to argue, which is common in our family, she will begin to yell right along with us without knowing what we are talking about.

On good days, she'll talk animatedly so that you think she discerns the world again, even if we only half understand her. She basks in the warmth of center stage. But on bad days, when the world seems a little less friendly, she wanders off, a frown of depression spoiling her aged face, or hides in her bedroom with the door shut. All passion and emotion remain, without a cognitive spirit to guide her.

Clinically, she might be considered an obsessive-compulsive. But all the stroke-related information that I can find on the Internet mentions things like depression, physical therapy and paralysis. I read testimonials about families having to adapt to wheelchair disabilities or victims becoming independent once again after an attack. Nothing seemed similar to my grandmother's case. I find out that it could be vascular dementia related to the stroke, but, as my mother reminds me, these behaviors always existed in my grandmother -- left with nothing else, they now make up the hugest proportion of her personality. She is a shallow pool. Still, I find her new personality to be endearing and quirky. I consider it a variation on her style, based on Oliver Sacks' notion that "'Style,' neurologically, is the deepest part of one's being, and may be preserved, almost to the last, in a dementia."

The next time I visit my mother, she tells me to look out the front door at the fading pink clothesline that hangs on her porch, the round kind with a dozen or more clips used to hold wet and dripping clothes. Today, in each clip, there is neatly placed a single puzzle piece from a puzzle my younger sister had been working on two weeks ago. For days, we had wondered about the 29 missing pieces of that puzzle.

I asked, not that it was really necessary, "Who did that?" "Who do you think?" was the response.

According to the American Academy of Neurology, nearly three-quarters of a million people in the United States suffer a stroke each year and 190,000 of those die. It is the third leading cause of death in this country. As an evolutionary biologist, I wonder about the role of strokes in our biological trajectory. I can't help but contemplate the fact that recent studies show an increase in strokes, just like we see the numbers for cancer go up each year, resulting in more research and treatment, all coincident with the prolonged life that humans in developed countries enjoy. I am one of those who sometimes takes a reductionist viewpoint, that when we tamper too much with nature, we get all sorts of unnatural results. In other words, my grandmother would have died without medical intervention and surgery, and could have forgone two years of depression, chaos and dependence.

Then something will make me realize, maybe one of those rare good days, that she still loves to laugh. On a recent Sunday afternoon, my mother -- who has taken up the role of matriarch -- filled the table with the ravioli and meatballs she'd prepared. My grandmother was talkative, inquiring, asking pertinent questions, even making a little sense. Some event would set her off, and she would take a few moments to laugh raucously, uncontrolled and out loud for several minutes. It was infectious. And as her granddaughter, I was suddenly glad that she did not die from her strokes and continues on life's journey. I enjoy her new self as much as I did her old -- the afternoon tea we take together, how easy it is to make her laugh and her unintentionally modern short gray haircut.

When I get a rare moment to myself, I think about my grandmother. I see the cycle of compulsion and control and cleaning winding itself around to my mother and my sisters and me. I worry that I might someday end up in the same situation. I wonder if right now, today, she is using a No. 2 pencil to line her eyes or writing a note with her lipstick. And my only wish for her is to leave this world, when it is her time to go, peaceful and happy -- at last.