Praise be to Steve Jobs

The marketing magician strikes again, with a Time cover story singing hosannas to a product on the very day of its public unveiling. 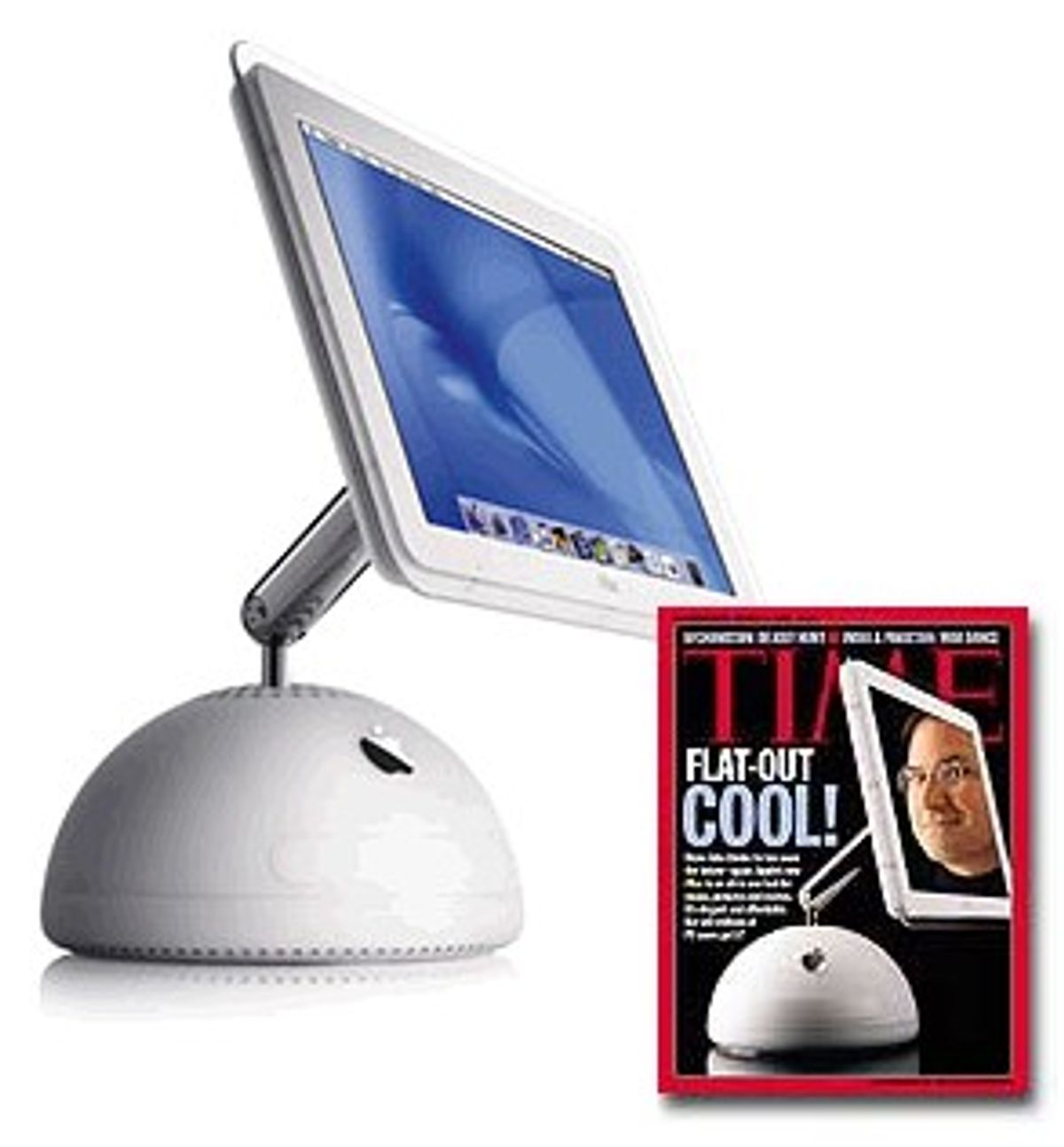 As the Mac-faithful streamed out of the Steve Jobs keynote address at Macworld Monday, flush with enthusiasm for the new iMac, every attendee was handed her very own copy of a brand-new issue of Time magazine. "Flat-Out Cool!" cheered the headline next to a photo of the new computer with Jobs' face neatly framed on the iMac's flat-screen monitor. "Steve Jobs thinks he has seen the future -- again."

The message to the exuberant Macworld goers was clear: Steve Jobs, the marketing magician, had struck again. A computer hardware announcement for a product that's not even available yet, a product that represents primarily a design innovation rather than a technical leap forward, sweeps Afghanistan off the cover of the country's largest newsweekly. All hail Steve Jobs.

Which is not to say that Apple entirely escaped a backlash. Speculation about the Time cover story on Slashdot set off some accusations of journalistic impropriety. According to Slashdot readers, the Canadian version of Time had posted the issue to its Web site for a couple of hours on Sunday night but then pulled it down and redirected visitors to the U.S. Time Web site, which did not update until midday Monday. Since Time usually posts its covers online on Sunday night, observers are wondering if the magazine kept its story from going online to avoid upstaging Mr. Jobs' carnival show. If so, the cover story marks as much of a low point for AOL Time Warner as it does a high point for Jobs.

But at Macworld the journalistic brouhaha made not the slightest bit of difference to the thousands of Macheads in attendance. Bursting into applause at their leader's words with all the fervor of the recently saved at a born-again revival meeting, they hardly needed the approbation of Time to make them excited. They were more than willing to cheer at the very mention of Apple's 27 new retail stores. The enthusiasm for software and hardware at Macworld is almost touching. To make light of it feels like sucking a sourball at a chocolate convention; it's just beside the point.

The loudest applause of the morning went to the new iMac, although the computer actually resembles a reading lamp and has already been dubbed the iLamp by snarky geek wags. It combines a 15-inch flat-panel monitor with a circular base holding the computer. Sparing no hyperbole, Jobs declared of his latest baby: "This is the best thing I think we've ever done."

But with its swiveling neck, the machine really has more in common with a lady's vanity magnifying mirror than a lamp. And when you play with it on the trade show's floor, it's disconcerting to note that the reflective silver Apple logo on the base actually acts as a mirror, serving a distorted image of your own face back to you. Who really wants to see what they look like after they've been staring glassy-eyed at the screen for hours?

If some dinosaur "real men" thought that the old iMac was too "girlie", then surely they'll deem this computer for even bigger sissies. But if the old iMac, with its fruity colors and rounded shape, won your heart with its cuddliness, then the new iMac, lab-coat white with a swiveling head, could be another frisky friend. Its range of motion, 180 degrees, makes it surprisingly anthropomorphic for a piece of hardware. And isn't personality, more than usability or reliability or price, what supposedly sells Apple computers these days?

Aside from the new iMac, the biggest enthusiasm at the keynote was for Apple's new digital photography software, iPhoto, which strives to make slicing and dicing your photos as easy as stealing music with Napster used to be. But can even Steve Jobs get us to buy back our digital photos from him in linen-covered hard-backed, coffee-table books starting at $29.99?

Maybe. I'm ready to believe anything now that I've seen Jobs get Apple's most loyal acolytes to applaud for Microsoft on command. Praising Bill Gates and Co. for the Office suite of software for Mac OS X, Jobs ordered: "Microsoft did a terrific job on this, and I'd just like to give them a round of applause." The disciples put their hands together in a show of obeisance. Hallelujah.