When Michael Moore's publisher insisted he rewrite his new book to be less critical of President Bush, it took an outraged librarian to get it back in the stores. 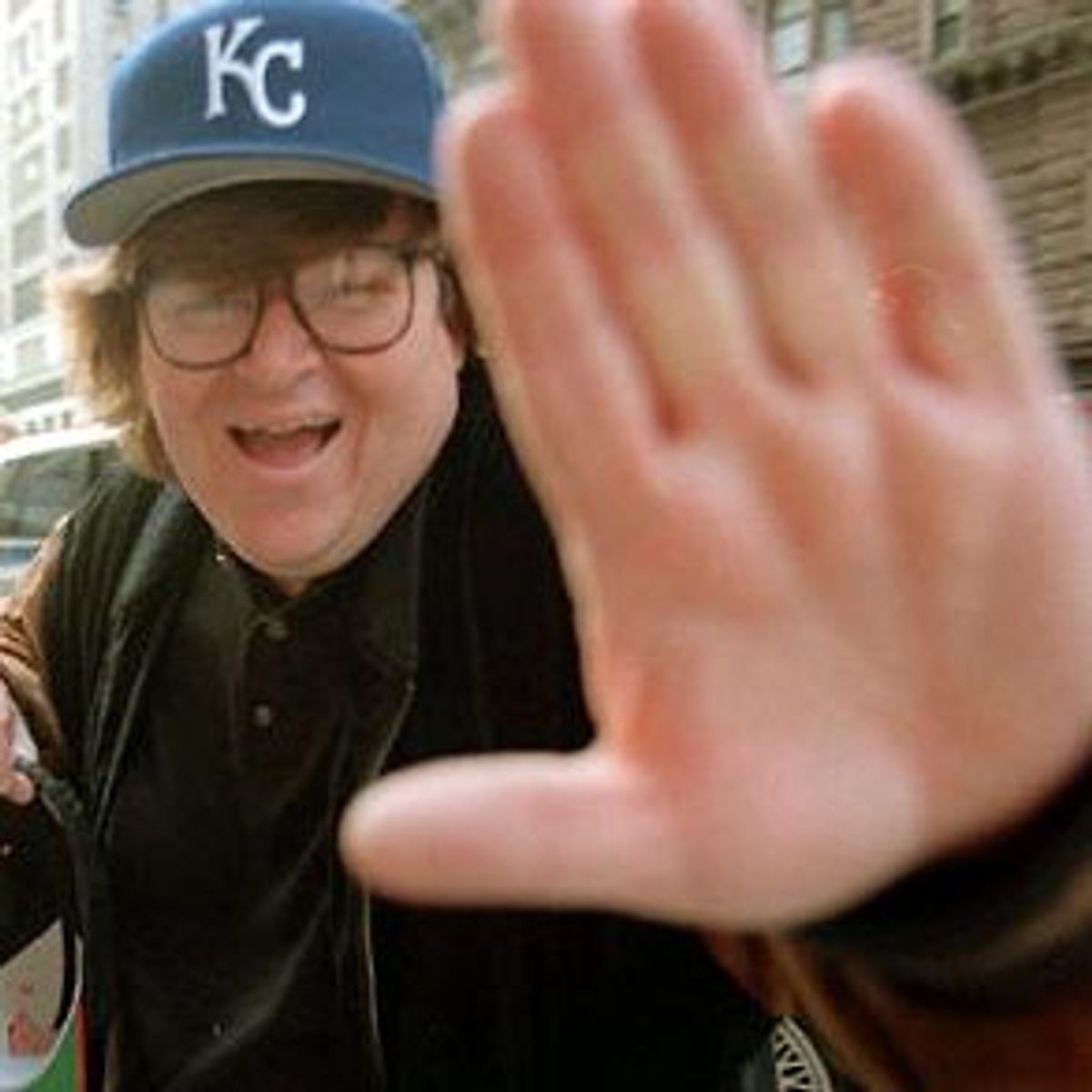 It was the kind of battle that provocateur journalist Michael Moore would ordinarily consider red meat: a major media corporation threatening a writer's freedom of speech. Moore's new book, "Stupid White Men and Other Excuses for the State of the Nation," which pointedly criticizes President George W. Bush and his administration, was due in stores on Oct. 2. As with many books scheduled for release in the weeks that immediately followed Sept. 11, plans to ship the title to stores were put on hold. According to HarperCollins, "both Moore and [Judith Regan's HarperCollins imprint] ReganBooks thought its publication would be insensitive, given the events of September 11."

By mid-October, there were 50,000 finished books (out of an announced first printing of 100,000) collecting a month's worth of dust in a Scranton, Pa., warehouse, and ReganBooks had yet to schedule a new release date for "Stupid White Men." It was holding off in hopes that Moore would include new material to address the recent events, and would change the title and cover art. Moore says he readily agreed to these requests. But once HarperCollins had his consent, it asked Moore to rewrite sections -- up to 50 percent of the book -- that it deemed politically offensive given the current climate. In addition, the Rupert Murdoch-owned publishing house wanted Moore to help defray half the cost of destroying the old copies and of producing the new edition, by contributing $100,000 from his royalty account.

Moore was aghast. "They wanted me to censor myself and then pay for the right to censor myself," he declared. "I'm not going to do that!" After close to three months of relentless negotiations that threatened to embarrass one of the country's leading publishing houses, the potentially explosive drama was suddenly resolved when HarperCollins announced on Dec. 18 its plans to publish "Stupid White Men" as is, slating the title for early March 2002. "We have made the decision to move it forward as it was. We're very happy about that," says Lisa Herling, HarperCollins' director of corporate communications. What motivated the publisher's change of heart? Not, as some might well expect, an ugly public fuss orchestrated by Moore. Instead, the author remained uncharacteristically quiet, and the protest over the holdup on "Stupid White Men" came from an unexpected source.

In fact, the turnabout was a surprise to Moore, but then so were HarperCollins' initial reservations about publishing "Stupid White Men." After all, Moore observes, "They not only bought the book, but they accepted the manuscript and printed it." But after Sept. 11, the satirical bite of Moore's book was too sharp for his publisher. In particular, HarperCollins flagged an open letter to George W. Bush, in which Moore asks the president whether he's a functional illiterate, whether he's a felon and whether he is getting the necessary help for his drug and alcohol problem. "They said it would be 'intellectually dishonest' not to admit that Bush has done a good job, and that the other things in the book wouldn't be believable if I didn't at least give Bush that much," says Moore. The author was certain that HarperCollins would cancel and destroy the book if he didn't accede to its demands. (The rights to publish the book would subsequently revert to Moore after six months.)

HarperCollins also wanted him to take out the chapter "A Very American Coup," about Dubya's dubious victory in Florida, and it objected to the title of an essay about race in America, "Kill Whitey." According to Moore, his editor at ReganBooks, Cal Morgan, explained, "It's not the dissent we disagree with, it's the tone of your dissent. You can't question the president about his past felonies or alcohol problems right now." (Cal Morgan did not respond to requests for comment.)

The publisher's request came at a chilling moment, on the heels of presidential spokeman Ari Fleischer's Sept. 26 warning (later retracted) that "all Americans ... need to watch what they say, watch what they do." In the weeks that immediately followed Sept. 11, television host Bill Maher and essayist Susan Sontag were excoriated for presenting unconventional views on the hijackers, and newspaper journalists at the Texas City Sun and the Daily Courier in Oregon were fired for voicing unpopular opinions.

Given the tenor of the times, Moore had reason to assume that his publisher would follow suit. After two months of uncharacteristic silence ("I spoke to no one in the media. I didn't want to upset anyone at News Corps [HarperCollins' parent company] and tip the scales toward the decision of pulping my book."), the author discussed his struggle with a crowd of 100 during a keynote speech at a New Jersey Citizen's Action private event on Dec. 1. He even read passages from the book: "It may be the only time it's ever heard by anybody," he explained at the time. "As far as I knew, there wasn't any press there, so I told people what had happened. They asked, 'What do you want us to do?' I said, 'Don't call the publisher, don't call the press. Let me deal with it.'"

But one person in the crowd refused to heed Moore's request. Ann Sparanese, a librarian at Englewood Library in New Jersey and a board member of the American Library Association (ALA), returned to work that Monday and posted a message on several ALA listserves -- among them, Library Juice -- detailing Moore's predicament. According to the ALA, libraries represent big money to publishers, spending over $2 billion a year for books and electronic information, and because of it, librarians have publishers' ears.

"I thought these particular librarians would be especially concerned," explains Sparanese. "The ALA has this big conference coming up in midwinter, and all of the publishers have booths there. At the very least, I thought some of us would've gone over to the Harper booth and said, 'What gives?'"

In her posting, Sparanese explained, "This is NOT a question of the CIA or the government demanding that a publisher stop publication for national security or some other well-known reason. The publisher just decided to walk away from the money -- the book's ALREADY printed and sitting in a warehouse -- because of the current war-inspired, anti-dissent atmosphere. Even satire is biting the dust, by the publisher's own hand."

Publishing insiders caught wind of the Moore's battle with HarperCollins on December 4th, when Steven Zeitchik of the publishing trade magazine Publisher's Weekly broke the story. He confirmed the existence of the conflict with both editor Cal Morgan and Moore's agent Mort Janklow. The New York Post followed up on the story the next day, and on December 14th, Sparanese's message was quoted extensively in "Holt Uncensored," a twice-weekly publishing industry e-mail newsletter issued by former book review editor and critic for The San Francisco Chronicle Pat Holt. Within days of the Library Juice posting and the Publishers Weekly article, a HarperCollins editor told Moore that they were receiving a lot of email from angry librarians about "Stupid White Men." Moore hadn't realized Sparanese had attended the Citizen's Action event (the two never met), but he partly attributes the publisher's shift in stance to her mobilization of other librarians. "Librarians see themselves as the guardians of the First Amendment," says Moore. "You got a thousand Mother Joneses at the barricades! I love the librarians, and I am grateful for them!"

Lisa Herling, who says she was not familiar with the librarians' e-mail campaign, could neither confirm nor deny their impact. "From our perspective, I don't know if it has anything to do with our decision."

Throughout it all, Moore insists he has kept his relations with HarperCollins friendly and intact. "I have complete empathy and understanding with HarperCollins and what they were going through -- and what everybody's been going through -- since Sept. 11. We've never been through any of this, and everybody is reacting in various ways and some people are behaving inappropriately.

"But I think we have to cut everybody a lot of slack because nobody has a playbook here. They went with their first instincts, which were 'Don't offend the president.' They said to me, 'We're publishing four Sept. 11 books, and we don't want to put this out and create confusion in people's minds.'

"This is a fascinating story because it shows what a free society does when confronted with a crisis. Do we maintain our sense of freedom and liberty and dissent and open discussion of the issues? Or do we start putting the clamp down? I waited it out to see. And HarperCollins eventually did the right thing. I'm really proud of this book, and I'm dying for it to get out there."