Colors flies over the cuckoo's nest 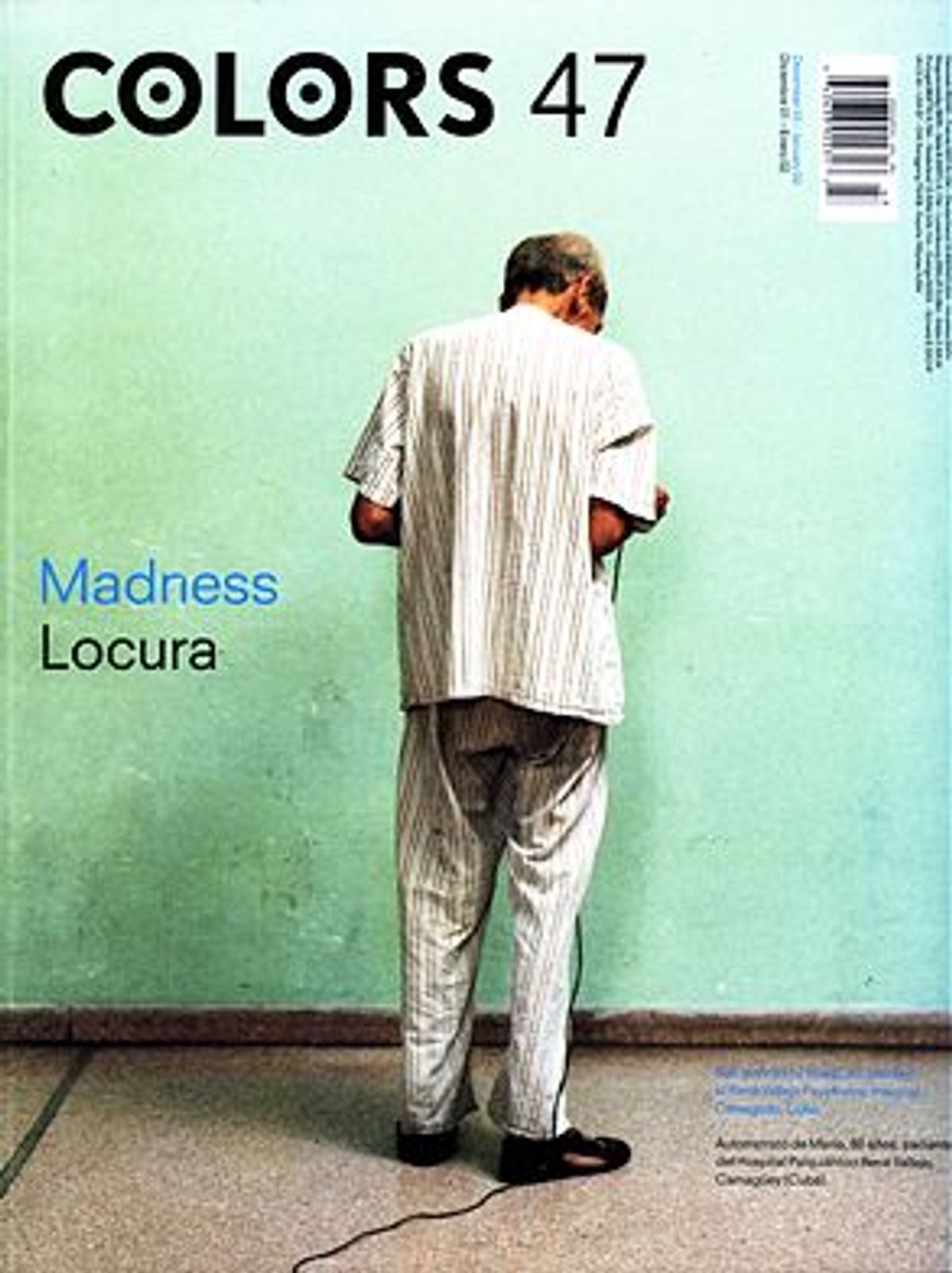 Colors magazine is always good, but sometimes, as in the case of the December/January issue, it's one of the best periodicals on the planet. The fact that it's owned by Benetton, the clothing company that has caused occasional media dust-ups with its edgy (some say offensive, exploitative, tasteless, etc.) ad campaigns, makes the quality of the magazine's singular brand of photojournalism more remarkable still.

Say what you will about Benetton and its advertising, this current issue of Colors -- No. 47 -- is a superb photo essay. The subject is madness -- people afflicted with mental illness and how they are dealt with across the world -- from Cuba and Ivory Coast to the United States, Albania, Australia, South Africa and beyond. In addition to the photographs -- lots of them -- the story is told primarily in the words of the afflicted, often in short interviews like this one:

"What are you scared of?"
"I'm scared of the outside because Rafael is there and I don't want to see him."
"But you are Rafael."
"Now you understand what I'm scared of."

Or as free-standing quotations running across the page in large display text, such as:

"I am the devil when I'm here; I am God when I'm outside";
"Happy the normal -- those strange beings";
"They tie me up because I have episodes. In those moments my mind is blocked and I get frightened";
"Madness is to be locked in a hospital without being able to go away"; and
"Once they give you an injection, instantly you stop hearing voices."

If you've spent time in a mental hospital as a visitor, a patient or a staff member, the opening spread of Colors' madness issue will be painfully familiar. The essay begins with a photo that spans two pages: a long, green institutional hallway with a shiny linoleum floor, tile halfway up the walls and a solitary chair pushed to one side of the corridor. Over the course of 93 pages, most of which feature color photographs, we see portraits of Raquel, 77, resident of Rene Vallejo Psychiatric Hospital in Camaguey, Cuba ("It's when people call me a whore that I go mad"); several romantically involved couples who met in the Camaguey hospital and are still patients there; a man in a Sydney hospital who defines his mental illness as "bronchitis"; and a married couple who live together in a Brazilian institution ("One day after my husband and I had one too many breakdowns, he came to me and said: Leonilda, our life is finished. Let's give away our children and go live in the hospital."

Colors devotes each bimonthly issue to a single subject and publishes multilingual editions. Past issues have focused on everything from mammals, water and trash to prayer, war, toys and time. Launched by Benetton creative director Oliviero Toscani (who parted ways with Benetton in May 2000 to join Talk magazine), Colors achieved its greatest fame, perhaps, during the short period that influential designer Tibor Kalman was its editor. It was during Kalman's reign that Colors released its "What if ..." issue, in which portraits of famous people were manipulated to change their race -- such as Queen Elizabeth rendered to resemble Spike Lee.

Now edited by Renzo di Renzo and creative editors Adam Broomberg and Oliver Chanarin, Colors' madness issue doesn't resort to tricks. It's just straight-ahead portraiture -- good, powerful, heartbreaking. Not to say it's joyless; it's not. There's more to madness than sorrow and desperation. The sweetest series of pictures in the issue is seven self-portraits made by patients in the Cuban hospital. The one used as the magazine's cover shows a full-length view of a pajama-clad man. His back turned, he faces a green wall. But the other patients engage the camera. Anais, 44, half-reclines on the floor and presses the cable release with a look of gentle wonder; Julio, 30, stands erect, one hand pressed to his heart; and Oreste, 24, clenches his fists and laughs.

In most countries the mentally ill are in hospitals or, as has been increasingly common in the U.S. since the 1960s, on the streets, fending for themselves, or in jail. According to Colors, the Los Angeles County Jail is home to 2,800 mentally ill individuals, and more than 315,000 prison inmates in the United States are mentally ill. Belgium has an innovative foster parent system in which patients are incorporated into families, while Ivory Coast has the most startling, and starkly inhumane, approach: according to Colors, "madness is believed to be caused by spirits that take over the body. To drive these spirits out, those considered mentally ill and dangerous are chained to trees, prayed over every day, regularly beaten and given little food."

The afflicted villagers are sometimes left there for years. Leonie, 19, laughs and says, "Hit me on the head, I'm bad, I'm bad." Basile, 30, has been chained to a root in the ground for six months. "I've lost my mind," he says. And hunched-over Augustin, 44, explains, "I can hardly stand up because my back hurts so much. I was chained for 12 years. I'm here because I've studied too much, I have too much knowledge."

But, Colors reveals, an angel has come to Ivory Coast's hell on earth in the person of Gregoire Ahongbonon, and his mission is to release the ill from their chains. "In almost every village," Ahongbonon tells Colors, "there is a person chained up ... The family often chains them out of ignorance." When Ahongbonon frees one of the afflicted, he first hugs them before the entire village (as madness is considered contagious by the villagers), then gives them a haircut, a manicure and bathes them. Later, he assigns them jobs, gives them freedom to move around one of his six welcoming centers and even lends them his car.

Ahongbonon trenchantly puts the barbaric Ivory Coast methods in perspective when he points out that the conditions in modern mental hospitals can also be crude and brutal. "You know, in so-called developed countries," he says, "the solution isn't much better. I've seen your hospitals. You lock patients into rooms, drugged to the eyeballs: It's not much different from chaining them to a tree."

Colors has always been the product of a peculiar marriage of social conscience, photojournalism and fashion marketing. (Though No. 47 carries no references to Benetton, except in the fine print, there are about a dozen pages of advertising, mostly from apparel companies.) The rap from Colors' detractors has been that it's sensationalistic -- marketing masquerading as socially relevant journalism. In Salon's 1999 obituary on Kalman, Matthew Haber wrote, "The magazine he created existed to promote a multinational corporation's brand identity and an expansive, multi-ethnic philosophy. It pushed boundaries in terms of its editorial emphasis on politics, and it pushed design to the point of post-literacy by making words secondary to images."

That's true, and Colors is no doubt an effective marketing device for the Benetton Corp., but the company -- at least in the "Madness" issue -- has made itself all but invisible. What's left is a masterwork of photojournalism with little intrusion by advertising. The essay achieves terrific momentum over its 90-plus pages. Given the quality the magazine often attains, Benetton's motives for producing Colors seem irrelevant.

Indeed, the squabble over Benetton's motives reminds me of a story I worked on more than a decade ago when New York hotel magnate Leona Helmsley was everywhere being demonized for her bad behavior. She was less popular than Cruella DeVille. Here in San Francisco, Helmsley's company owned a large apartment complex from which a woman, a longtime tenant with health problems, was about to be evicted. When Helmsley got wind of it (and after the media had also gotten wind of it), she immediately canceled the eviction. In an interview about the matter with an official of the San Francisco Sheriff's Department, who would have had to enforce the eviction, I questioned Helmsley's motive. "But really," I said to the official, "why do you think she did it?"

"It doesn't matter why she did it," he said. "She did the right thing. That's all that matters."