Are we not housewives?

I don't care what feminist moms say, Erma Bombeck is still the most relevant and hilarious voice in the wilderness of motherhood. 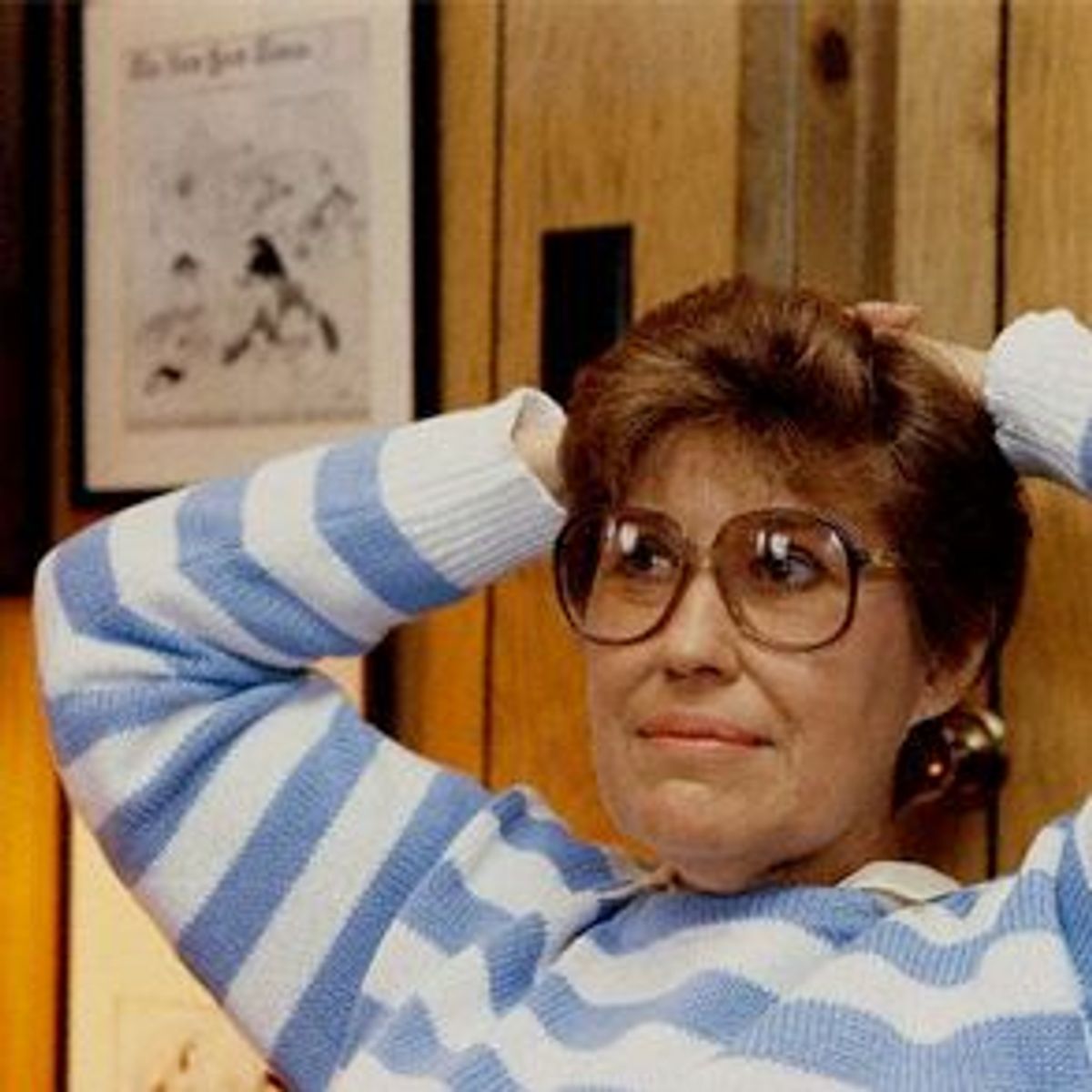 I picked up a copy of "Motherhood, the Second Oldest Profession" in a thrift store the other day. The title made me laugh, as it must have made millions of other book buyers laugh many, many years ago. As a British ex-pat, I failed to recognize the name Erma Bombeck. And it was only after I began to rave about her books that I learned that poor Erma, despite her bestselling past, is now considered by many to be a relic, an out-of-date purveyor of politically incorrect advice on mothering and housekeeping. While she may have been amusing for a decade or so, Erma, I now know, is no longer an appropriate humorist for today's mothers. She is instead a caricature of women as they should not be.

But approached with an untainted mind, Erma Bombeck's writing is honest, timeless and wickedly humorous. What woman with both a sense of humor and children could possibly reject titles like "I Lost Everything in the Postnatal Depression" and "The Grass is Always Greener Over the Septic Tank"? What mother could reject without a pang of empathy or relief Bombeck's frequent admissions of being an imperfect and slovenly mum? And for the dwindling but proud regiment of less-than-perfect mothers, she is something of a voice in the wilderness -- a patron saint, if you will.

It is true that in some ways, life has changed dramatically since Erma was bemoaning the housewife's lot. But interestingly, in many ways it has not changed at all. Recognizable in the Bombeck profile of American moms is the low esteem in which a housewife's role is regarded by society; recognizable too is the low esteem in which housewives hold themselves. Unrecognizable is the way women in the '50s seemed consigned and resigned to the narrow drudgery of domestic life. Unrecognizable is the way that women of that era could not see a way out.

Today's stay-at-home moms (never "housewives) are more than likely to indicate that they choose to "work in the home" voluntarily. Sometimes this is to announce to the world that the family is prosperous enough to live off one income; sometimes it owes itself to pressure from the more reactionary factions of our society who wish to return to the perceived delights of family life in 1950s suburbia. But once they are at home -- for whatever reason -- mothers often find the scene to be not so vastly different than the one of Bombeck's description.

Sure, the role has been repackaged and reworked, but many -- dare I suggest, most? -- stay-at-home moms of the moment can relate to Bombeck when she writes: "If someone was to run an ad in the New York Times which read: WANTED: Household drudge, 140 hour week, no retirement, no sick leave, no room of own, no Sundays off. Must be good with animals, kids and hamburger. Must share bath, would 42 million women still apply?"

It certainly is not hard to understand why Bombeck once soared to popularity. In her heyday, most women were housewives straining to emulate June Cleaver only to find themselves empty and exhausted. Sadly, many women are still attempting the same feat, but because they have theoretically chosen this calling, they are prohibited to complain.

Bombeck was utterly honest about the highs and lows of family life: Not for her the smug lecturing about a mother's crucial role in child development or the cheerful updates on new heights in household cleanliness. Not for her the relentless accounts of jolly banter between herself and the exhausted, but deserving paterfamilias. Nor is there evidence in her writing of cute and insightful words from the mouths of (her) babes. She does not mention -- once, that I'm aware of -- the requisite rules of quality time.

The Bombeck family was real to readers: The children goofed off at school; Erma could never find Scotch tape; she hated housework and was a disaster in the kitchen. You could believe that her children, like mine, would casually walk up to her, wipe their nose on her skirt and walk on without batting an eyelid -- and that this was the basis of legitimate grumbling.

Bombeck also courageously explored the competition between mothers -- a tradition very much in evidence, beneath tolerant smiles and muttering, today. She had the guts to publicly regret moving to a "bad neighborhood" where "thin, talented, organized mothers who are also athletic" prowl the suburban streets and aim to make all mothers in their path feel inferior.

Those mothers still exist; we meet them on a daily basis. They still irritate the hell out of us. We still feel occasionally substandard when we use muffin mix or go a couple of weeks without a linen change. But in the old days, Erma was there to make slipshod mothers feel better: At one point she insists that a child would rather play poker with his mother than have her serve on every committee and provide homemade nutritious snacks in a perfectly coordinated, spotless home.

At bottom, Erma Bombeck, who died in 1994 after a kidney transplant, has a lot more to offer than a mere chronicle of housewifery before "women's liberation." Her books are a wake-up call. They remind us that our lives as housewives are not much different today -- despite the fact that we have supposedly "come a long way, baby."

Many feminists derided and dismissed Erma for being too traditional and unenlightened. Those detractors who later had their first children in their 30s and 40s are probably finding themselves just as overwhelmed, frustrated and undervalued as mothers were before feminism -- the only difference is that they have forbidden themselves to have a sense of humor about it. Do they now have a more evolved spin on the world of motherhood than Erma? Not really, unless you count the fact that these days we must also feel guilty for being mothers if we do not mother in a contemporary fashion. And if we fall short, we will be criticized first and fiercely by our peers.

The effort of raising a family and the antics involved in the struggle between parents and children will always provide material for hilarious (often slapstick) comedic farce -- in the right hands. Bombeck was a master, a writer who spun the details of our difficult and largely invisible toil into high comedy. She exposed the rigors of motherhood and in the process made mothers proud. Her talent was in creating a world in which (normal) mums could breathe a hefty sigh of relief, thankful that they could be their imperfect selves. More importantly, Bombeck may have humbled those who tried to disrespect those in the "second oldest profession."

It is hard not to feel a kinship with Bombeck and to wave her books under the raised noses of perfect mothers who desperately need the naughty pleasure of honesty and humor. Erma is from the generation who couldn't believe how nightmarish their teenagers were. We are those recovering nightmarish teenagers who now can't believe we are parents. We also can't believe how hard it is, how unsung, messy, imperfect and glorious it is to be mothers -- or how nightmarish our teenagers are. We need Erma like our foremothers needed Erma: now more than ever.

Let us pray that our own children, once blessed with children of their own, do not need Erma quite like we need Erma, but will honor her -- and us -- nonetheless.

Sophie Butcher is a writer, accupuncturist and mother of three in Ojai, Ca.