At Macworld, out-of-work dot-commers pose as marauding clowns. The authorities are not amused. 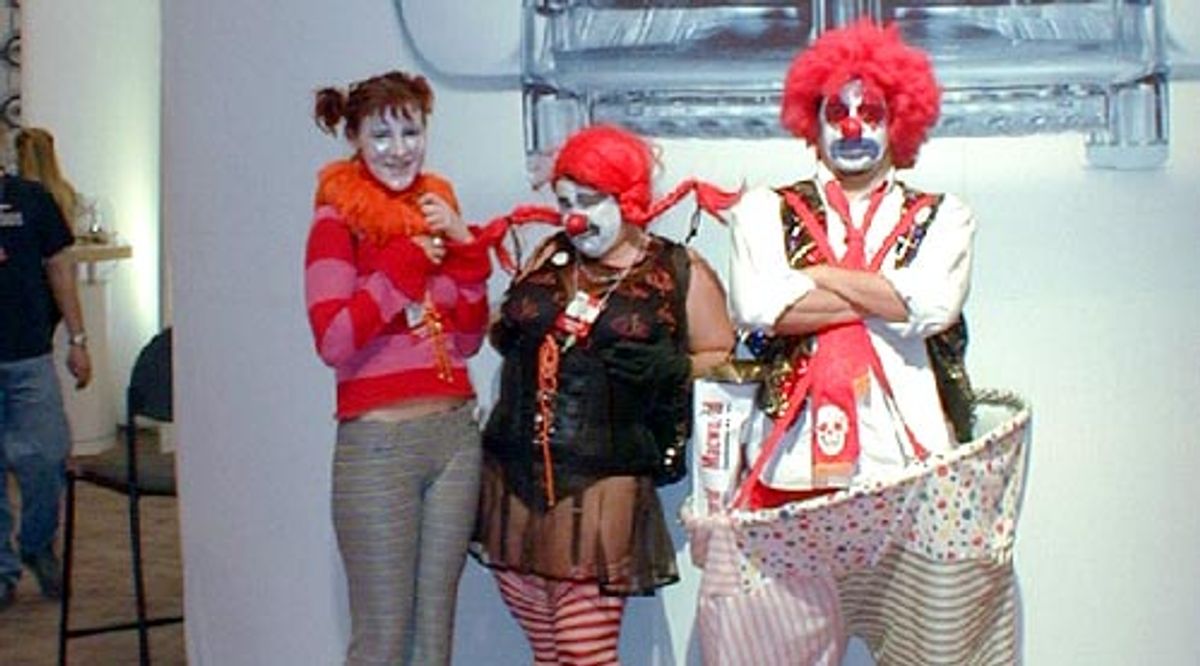 Even wearing 100-gallon striped and polka-dotted pants, with a hula hoop for a waistband, a big red nose and a huge, red wig, Flambeau the Klown still looked sad: "Macworld is no fun anymore. They won't even allow clowns to have any fun," he griped.

Flambeau and four of his goofy friends had just been turned away Wednesday afternoon at the entrance to the Macintosh computer trade show at Moscone Center. A pack of security guards informed the four clowns and their ringmaster that their mini circus could not enter the trade show floor with bunches of balloons with the logo "iKlown" written on them. The clown's ringmaster, decked out in a black top hat and a painted-on curliecue mustache, would also have to check his megaphone.

The clowns' crime: Branding without a booth.

It seems that in their quest to prank the Mac-addict trade show, the wags of iKlown had come a little too close to reality. Who could tell the difference between these clowning marketers for the fake company "Evil Klown Industries LLC," promoting their fictitious iKlown Personal Digital Companion, and the antics that any real company desperate to get attention for its brand might pull? Still, while Apple may promote its computers as the choice of renegades and rebels, artists and creative geniuses, when it comes to goofing up the economics of trade shows, they aren't kidding around. No booth, no circus.

The clowns, or Klowns as they prefer, were not deterred. They retreated to their car to leave the megaphone behind, and gave the balloons away to passing children on the way. "It's tough to be a clown in this economy," confided Ringmaster Scout. "People are kind of sad. They're not psyched to see a clown."

Back in line to register with the other Macworld attendees, the clowns started their harassing shtick: "I'm iKlown, your personal digital companion. Can I follow you around all day?" Flambeau razzed a puzzled conference-goer. Flambeau's official conference badge listed his place of employment as "Klowns Against Santas."

"Clowns are to Macs as Santas are to Microsoft," he explained, just confusing the matter more.

Since this is San Francisco, it's not enough for the clowns to be silly or even vaguely menacing; they had to also be pointlessly sexually suggestive. iKandi the Klown wore a black leather corset, showing more cleavage than clownage. At one point, she inexplicably donned black latex gloves. And under Flambeau's enormous pants, he wore very visible red lacey bloomers.

"We give the people what they want," added Flambeau, who used to be in business development for Alexa Internet. That's right, he's -- what else? -- an out-of-work dot-commer, as are his clowning compatriots. "We're trying to get a job," sighed iKandi. "We're tired of sending out résumés over the Internet."

It turns out that even in fake companies, like Evil Klown Industries, there can be power struggles and corporate coups d'etat. It turns out that San Francisco's best-known perverted clown, Ouchy, had been the CEO of Evil Klown Industries until this very morning. But creative differences -- and a day job -- had driven the S/M clown to abandon the company in a huff. The new phantom honorary CEO: Jobsy the Clown.

Now, the remaining iKlowns positioned themselves next to the line to pick up conference badges, harassing the mostly amiable attendees:

"Are you afraid of clowns?"

"Microsoft hired us to culture-jam the show."

Although they'd been forced to lose the balloons, the clowns did manage to smuggle in promotional buttons to pass out. One goofed on Steve Jobs' new catchphrase, "digital hub." "I hub u" read the button. The other: "I came, I saw, iKlown." It's almost as bad as some of the stuff that companies actually do.

At the Macintosh booth, crowded around the new iMac, aka the iLamp, the clowns couldn't help but be a little seduced by the new design. iKandi reached out one black-latex gloved hand to swivel the iMac's flat screen. Could techno-lust tame even the clowns? The next day, iKandi confided in e-mail: "We are going back all straight today to actually learn some stuff and meet people for real."