Painters, photographers and sculptors show us their vision of the naked man today -- and it's more than abs, pecs and butts. 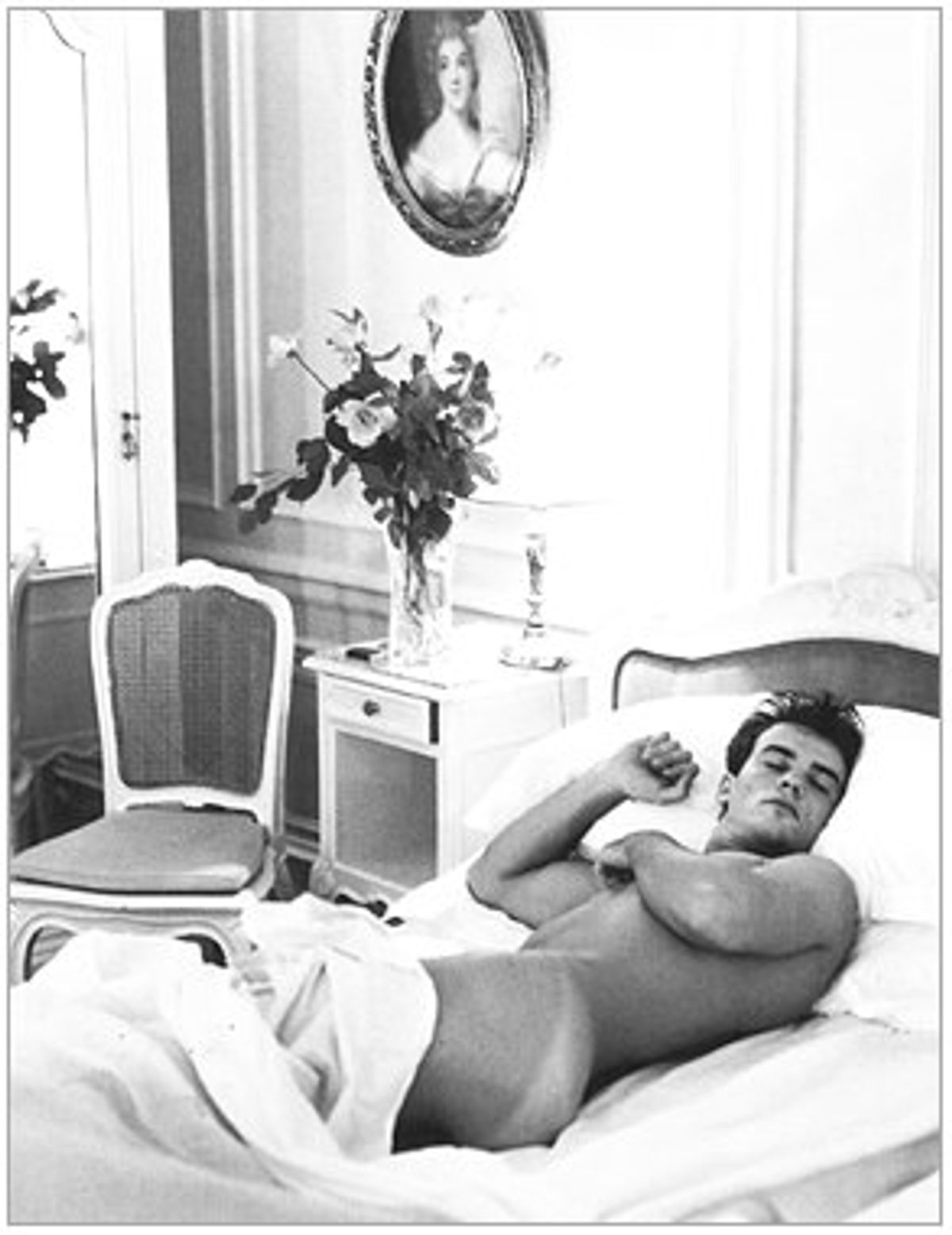 Whatever happened to the male nude?

You may not have noticed the shifting cultural representations and perceptions, but after each ad campaign for men's underwear has lowered (or perhaps raised) the bar to successively reveal more acres of rippled abdomens and well-defined pectorals, man flesh has grown increasingly acceptable as sex object. In artistic and societal terms, one could claim that this was a 20th century phenomenon, with roots in ancient Greece.

In the compilation "Male Nude Now: New Visions for the 21st Century," David Leddick offers his forecast for the future of flesh. A leading expert in male nude photography (as the jacket flap describes him), Leddick serves up a couple of hundred snaps of buffed guys in the buff by nearly as many photographers, as well as a few painters and sculptors, that he claims chart new visions. If the pictures don't exactly back up his breathless claim that "the extraordinary changes in attitude toward the male nude in the twentieth century have set the stage for even more exciting developments in the twenty-first," his book does affirm the fact that the male form has timeless appeal.

What we have here, then, is a Whitman's Sampler of eye candy, with the spirit of 19th century Walt haunting the box. (The most modern-day aspect of the project is the listings of Web site and e-mail addresses for the artists in the index.)

Still, this wouldn't be a reputable collection if there weren't a legitimizing theme and structure. Arranged in sections intended to give aesthetic credibility to this beefcake appreciation society, Leddick brings us into the realms of photographers and artists whom he calls Realists, Neoclassisists, Eroticists, Sensualists, Romanticists, et al.

In the Experimentalists section, for example, you'll encounter photographs employing visual effects, performance tactics and even sculptural forms. Palm Beach-based Colombian artist Beto Alvarez, we learn, "operates a thriving commercial business casting men's penises in bronze." Here he's represented with two transparent penises joined to form a cross. Seemingly floating inside of it is a picture of a man with arms outstretched, crucifixion style. On the facing page, there's an extreme close-up of a puckered anus, with a few scraggly hairs around the edges of the starlike shape. Photographer Heidi I Siedlecki's somewhat disturbing view is included to offer a bracing sense of contrast -- not all erogenous zones are necessarily much to look at.

In the more comforting Neoclassicists section, one encounters a Degas-like bronze of a willowy naked guy by Mike Leckie as well as Veronique Willemin's moody black-and-whites of the hard-muscled contours of marble statues in Paris. More surprising are Japanese artist Hidekichi Shigemoto's scroll paintings of naked black guys, an unexpected merger of cultures, subject matter and technique; and George Dureau's images of unclothed amputees who are posed to resemble sculpture. They're unnerving images that have the formal grace of, say, a bronze body artistically abbreviated by Rodin, until you realize these are living beings.

In the current millennium, categories are fluid. Many of the pictures in this collection could be included in any number of those sections. Gender blur is perhaps the most now topic addressed here. A drag superstar performance artist poses, flexing his surprisingly sinewy biceps, in full makeup and wig and just a pair of Calvin Klein briefs in Brian Theis' intriguing celebrity portrait, "I Am Lypsinka's Brother." Included in the Experimentalists section, it's a memorable evocation of a mind/body, male/female duality. Vivienne Maricevic's grittier images, in the Realists section, depict the bodies of transsexuals, a physically ravaged female to male and a trio of chicks with dicks.

Leddick, however, doesn't trounce his light art historical ideas in the condensed entries on each of the photographers. He writes of one photographer who snaps scruffy street people, "As we had Marcel Duchamp, who was fascinated with found art, now we have Victor Arimondi, who is fascinated with found men." Or, of another artist: "The photographer's latest show, Manscape, revealed the penis as another planet. Many people reacted as if they had never visited it before." Hubba, hubba.

The pictures, thankfully, speak for their fleshy, gym-toned selves. There are images of men in repose, in action, in artfully atmospheric settings. There are close-ups of cocks, and more modest guys packed into fashionable undergarments. A smattering of Prince Albert piercings and modern-primitive tattoos spices up the volume.

Still, Leddick uncovers a salient theme in the brief introduction. "The ever-growing visibility of the male nude is due in large part to the grand social changes that occurred in the Sixties, most notably the rise of feminism and the gay rights movement," Leddick writes, with the air of a very 20th century cultural theorist. One surmises that the photographers fit into those two camps -- women and gay men.

In the latter camp you could place the hip homosexual horror novelist Clive Barker, who, it turns out, also dabbles in photography. While this is nice to know, he makes it clear why he's better known for his fiction than his photos -- his lushly colored snap of a glistening, erect penis sprouting from a handful of dry Froot Loops isn't exactly haunting. In fact, it's barely distinguishable from a wacky erotic greeting card with a message reading "Got Milk." Barker's handsome husband, E.D. Armstrong ("They are the new definition of the power couple," Leddick offers), is also included with two photos of muscled dark men oiled to a marble sheen, one of whom sprouts long devil horns from his shaved head.

Similarly mythic male images are served up by a more artistically credible dynamic duo, the French artists Pierre et Gilles. Their "La Tentation de Saint Antoine" features a comely man brandishing a gently arching hard-on as he frolics in a seemingly bejeweled forest. A defiantly female perspective is offered by noted fashion photographer Ellen von Unwerth, whose picture shows a gaggle of gamine women's legs caressing a prostrate man in a Speedo with their spike heel shoes. He giggles with pleasure. It's a frolicsome image rather than smoldering eroticism.

One of the book's intriguing qualities is the way it brings together established and lesser-known artists and even outsider artists who all share an appreciation for naked guys. There are names with art world cachet: Chuck Close, Eric Fischl, Nan Goldin, David Hockney, Jack Pierson, Wolfgang Tillmans and even Renée Cox, the woman who, you might recall, bunched up Rudy Giuliani's panties when she pictured her topless self in an interpretive "Last Supper." (Here she shows us a strapping man wielding a fro, well-toned abs, a book and perfect proportions.)