"What Time Is It There?" 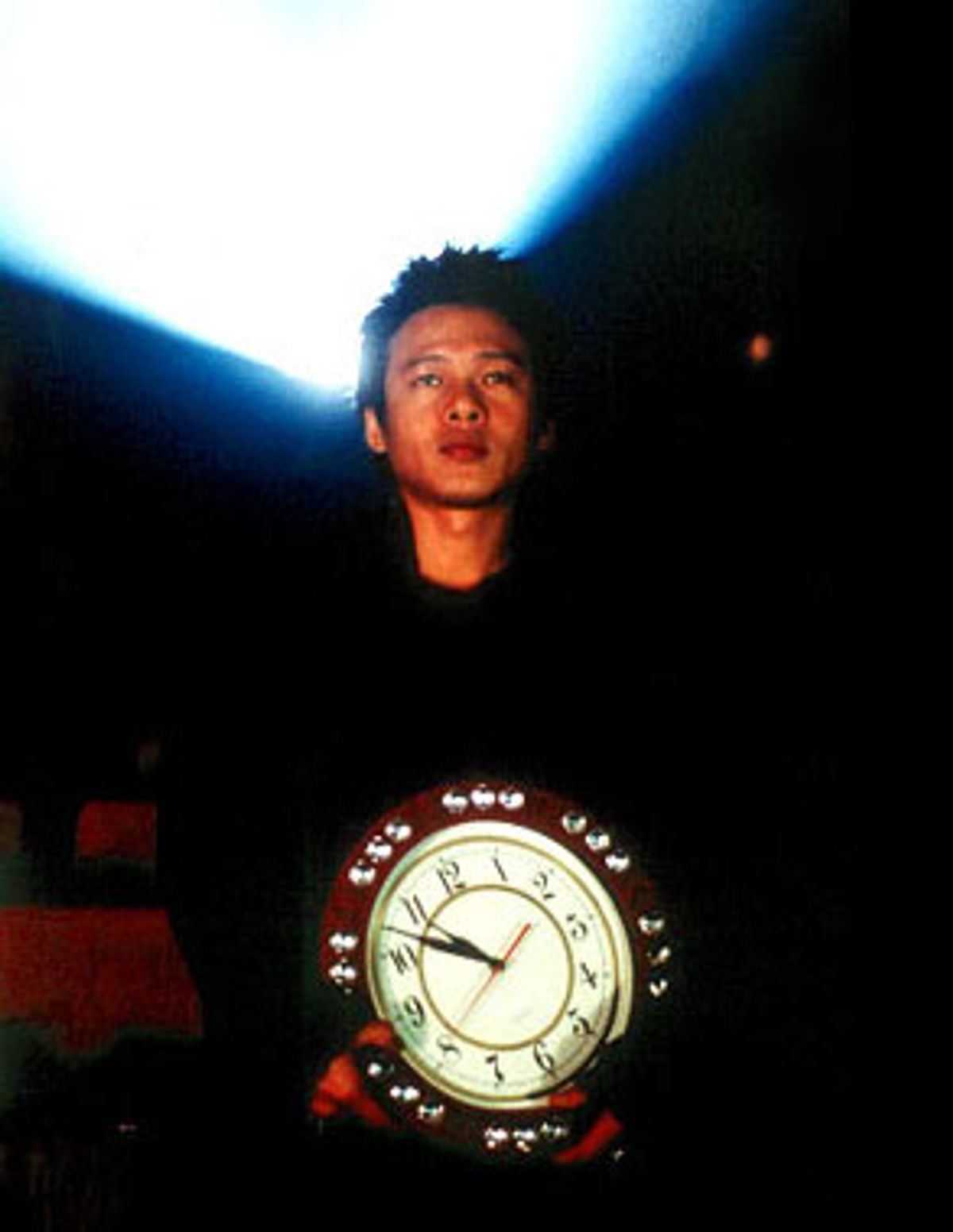 How do you praise the films of Tsai Ming-Liang without making people dread the prospect of going to see them? With a few exceptions (A.O. Scott in the New York Times, Howard Hampton in Artforum), nearly all of the praise this Taiwanese director's films have earned has made them seem forbidding, glum, the sort of pictures you drag yourself to out of a sense of duty but you don't expect to enjoy.

Part of the problem is that the movies that compare with his themes and his style are no fun. If you say Tsai makes movies about urban alienation -- and he does -- it's likely to call up memories of trying to stay conscious during Antonioni's snooze-fests of chic anomie. And if you identify Tsai as part of the "art" wing of Asian cinema -- and he is -- and say that his movies comprise long, unbroken takes during which the camera almost never moves and there is next to no dialogue and little music, you make him sound austere, formalized, punishingly slow in a manner that we're supposed to accept because it's the Asian "sensibility" or some such thing.

It's not that the comparisons are wrong. It's just that they do nothing to convey the emotion, the humor, the sense of romantic longing or the sudden lyrical enchantment that Tsai is capable of. His latest movie, "What Time Is It There?" (which opens in New York Friday after playing at last year's Cannes and New York film festivals), is his fifth movie and the best of the three I've seen. It's the kind of leap a director makes when he has become so sure of the techniques and themes that have preoccupied him that he seems unable to make a wrong move. He returns to scenes and concepts from earlier movies (as directors as diverse as Godard and De Palma have done) because he has figured out how to make them work better than ever. There are moments in "What Time Is It There?" -- precise and surprising bits of deadpan comedy, unexpected and poignant wellsprings of melancholy -- in which Tsai might be reinventing the delicate, poetic shadow play of silent movies. Howard Hampton has described Tsai's movies as Buster Keaton inhabiting the soul of Antonioni, which is to say that a sense of perseverance and comic acceptance trumps any self-indulgent ennui.

Like Tsai's last movie, "The Hole," "What Time Is It There?" is about the connections between people who remain separate. "The Hole" (which is available on DVD) is the cheeriest end-of-the-world movie you're ever likely to see, with cheeky visual references to both the heist sequence from "Rififi" and Michelangelo's painting of Adam touching the hand of God. The Sistine Chapel of "The Hole" is an anonymous modern apartment block in Taipei that, in the days leading up to the new millennium, has become part of a quarantined zone. A mysterious virus is sweeping the city, causing the afflicted to fear light and hide like insects. While torrential rain falls endlessly (the constant sound is alternately lulling and crazy-making), an incompetent plumber's repair has left a hole in the floor of one young man's flat. He peers down from it on the woman who lives below as she hoards paper towels to mop up the leaks and, like any harassed city dweller, just tries to get on with life. In the movie's best visual gag, an emblem of the battered nonchalance with which Tsai's characters live, she sits on the toilet peeing while holding a pan above her to catch the water dripping on her head and trying to contact a plumber on her portable phone. And did I mention it's a musical? Periodically, the screen bursts into colorful production numbers while the woman imagines herself in spangled outfits singing the songs of the '50s diva Grace Chang (to whose music the movie is lovingly dedicated). It's a little like watching Jacques Demy doing a color remake of Chris Marker's sci-fi parable "La Jetée" (which is in black-and-white and composed entirely of still photographs).

The characters in "What Time Is It There?" are separated by something far more substantial than an apartment floor and ceiling. There are continents and time zones between them, and yet it's part of the mystery of the movie that they seem in sync. Lee Kang-Sheng, the star of all of Tsai's movies, plays a Taipei street-corner watch vendor whose father has just died. While his mother (Lu Yi-Ching, who brings a glancing, comic touch to a portrait of a woman in deep mourning) becomes discombobulated with grief, ladling out meals for her dead husband, suspecting he's been reincarnated as the family's pet, an enormous white tropical fish (Lee's real-life pet, Fatty), Lee quietly obsesses over a young woman (Chen Shiang-Chyi) to whom he sold a watch -- his own -- before she took off to Paris. Except that "obsession" is too dramatic a word for the mute matter-of-factness of Tsai's world. Starting with his own watch and then the watches in his sample case, Lee begins methodically setting every clock he comes in contact with ahead seven hours to Paris time. Finding their apartment clock suddenly changed, Lee's mother is convinced her dead husband has returned, and she rearranges the family schedule, serving supper at midnight. Rows of children's alarm clocks displayed in a store, the wall clocks at a movie theater, all come under Lee's manipulations. The scenes of Lee plying his trade or resetting the city's clocks are deadpan discourses on the tyranny of time. He whiles away boredom trying to destroy a watch his supplier has told him is unbreakable. And when he leans over the side of a Taipei building with a pair of long metal grabbers to change the hands on the clock face stories above the street, he's like some lovesick Harold Lloyd turning the tables on time itself, determined not to be dangling at its mercy.

The humor and the pathos of Tsai's approach is that everything has been reduced to a weird equivalency. Lee's grandest act of time sabotage has no more weight than his calling the operator to find out the time in Paris. Only two brief meetings having taken place between Lee and Shiang-Chyi, the young woman. So why does he do it? To erase one of the arbitrary boundaries between them? As a sign of devotion, like a lover carving initials in a tree trunk? Or just because he doesn't have anything better to do? Each explanation would serve -- and yet each seems finally inadequate.

What distinguishes Tsai from other filmmakers who have dealt with the boredom and emptiness and isolation of contemporary urban life is that while his characters may appear numb, and while his technique -- those long, still, nearly silent takes -- can look indifferent, like a refusal to dramatize (I'd say they are a refusal to dramatize falsely), he never impedes emotion. Like the emotion that wells up in musicals or comedy, the emotion in Tsai's movies -- like Lee's mother confessing how lonely she is to Fatty as he floats, unblinking, in his tank -- is all the more keen because it comes out of a surrounding absurdity. Intercut with the scenes of Lee in Taipei are those of Shiang-Chyi's sojourn in Paris. The irony of the scenes may be that she is no more alone in that city than she was in Taipei (no more alone than Lee, left behind, is), but instead of irony, the scenes radiate with the piercing sadness of a silent heroine's travails. They are the ordinary travails of homesickness (or, in this case, longing for a home that may never have been) and not belonging: wondering how to order in a restaurant; killing time over a cup of coffee; lying awake in a strange hotel listening to the noises from the floor above; not being able to understand train announcements; gazing at an Asian man across a subway platform as if he were a key to something familiar. As we watch Shiang-Chyi, it's as if some magic passage opens between the screen and the audience; her wide eyes and dazed expression bind her to us. The feeling the movie elicits is something like a realization of Lee's unarticulated dream of collapsing time and space -- a way of putting characters and audience alike on the same plane, making us all travelers connected by the desire to connect.

Tsai's method takes some getting used to (this film or "The Hole" are good places to start). The silent, seemingly undifferentiated flow can at first feel flat or even boring. He shares something with directors who allow the audience to respond at their own pace. When you settle into the films, the connections he makes feel magical. (Just as there are unexpected grace notes, pockets of warmth, in the lighting of Benôit Delhomme's photography.) Lee, unable to sleep, huddles in his bedroom watching a video of Truffaut's "The 400 Blows" (Tsai's favorite movie), looking as lonely as Jean-Pierre Liaud's Antoine Doinel wandering the nighttime streets of Paris. And on a Paris bench, Shiang-Chyi encounters the grown-up Liaud, who offers a momentary bit of human contact (and whose deadpan style is perfectly suited to Tsai). There is certainly magic in Lee Kang-Sheng, who's as handsome as a teen idol. What he does isn't "acting" in any formal sense, but it would take real insensitivity to the subtleties of performance not to see the nuances of feeling in the seemingly fixed expression of his face. (Look at him as he watches Shiang-Chyi walk away from his street corner and you'll see an inexpressible longing, as if his chance for something that will lift him above his routine were receding before his eyes.) If he is Tsai's everyman, he is without the sentimental elevation and implicit condescension that concept usually entails.

It's hard not to keep returning to silent films when you talk about Tsai Ming-Liang, and that is because his is a poetic temperament, and is all the more so because he is operating in a mundane world that would seem to have ruled out the possibility of poetry. To say that "What Time Is It There?" is pure is to make it sound rarefied or austere. Rather, it's enveloping. As in silent comedy, the jokes coalesce unexpectedly out of a transformation of the mundane. And as in silent drama, what wounds us has both gravity and fleeting lightness, like a phrase of music that wafts into the air as it burrows into your heart.