The great scientist and conservationist explains the terrorism we insist on overlooking. And space colonies won't help, either. 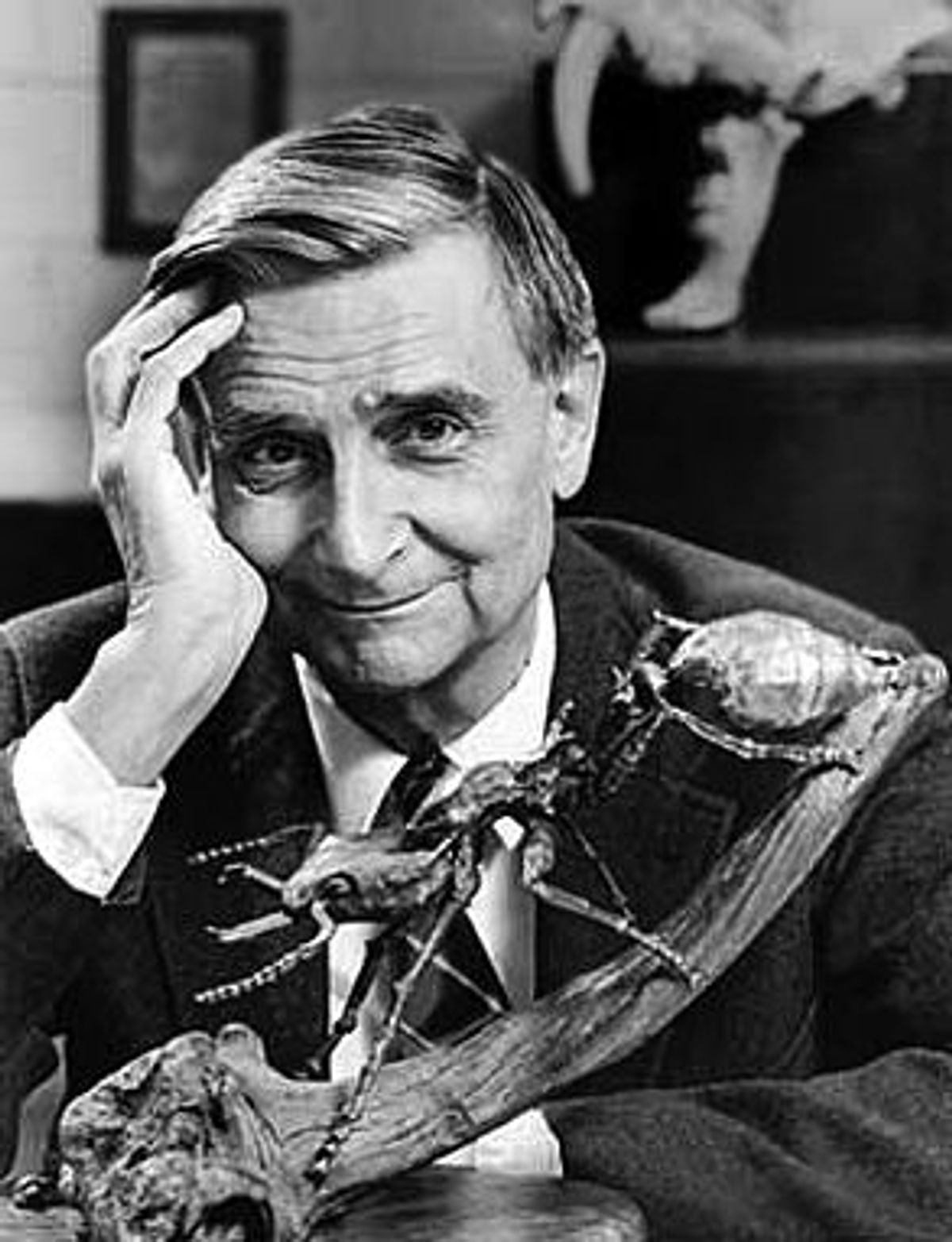 E.O. Wilson is one of America's most prominent scientists and the author of two Pulitzer Prize-winning books, "On Human Nature" and "The Ants," as well as other groundbreaking books such as "Naturalist," "Sociobiology" and "Consilience." A professor of biology at Harvard from 1955 until 1997, Wilson has received many of the world's leading prizes in science and conservation.

His work in sociobiology forms the foundation of current evolutionary psychology study. His research on insect societies has informed the work of contemporary complexity theorists who are looking at complex natural systems. In his most recent book, "The Future of Life," Wilson focuses on the state of the natural environment, analyzing the threat to our biosphere and offering a set of recommendations for the protection of life on Earth.

If present trends continue, the result will be irreversible impoverishment of species. At the current rate, we will lose half the plant and animal species on Earth by the end of the century.

If we lose half, we'll still have millions left, won't we?

But the loss is forever, and these species are hundreds of thousands of years old, in many cases millions of years old, and exquisitely well adapted to their environment. Each species is a masterpiece of evolution that humanity could not possibly duplicate even if we somehow accomplish the creation of new organisms by genetic engineering. Massive loss of species would decrease the stability of the world environment. Beyond that, we will lose living libraries of genetic information that could be enormously useful to humanity in the future. Finally, there is the moral argument: that there is something dreadfully wrong about destroying the creation.

What's the impact on human beings?

The best estimate on human population has us leveling off at 9 or 10 billion people by the end of the century, and that's just about the absolute limit, without some radical new way of producing food or generating energy. The pressures on the remaining natural resources -- the coral reefs, the rain forests and the arctic tundra -- may become totally devastating.

What about the economic impact?

Consider that, according to a study based on data for the year 1997, the natural world and all those millions of species contributed an estimated $30 trillion worth of services completely free that year. That's roughly comparable to the GNP of all the countries of the world combined. And experts believe that we would require four more planet Earths to sustain everyone in the world at current American consumption levels. We have to improve the quality of life, but not with the wasteful and inefficient modes of production that now dominate the developed world.

New, sustainable energy generation, new forms of transportation, conservation of natural resources and general improvement of the quality of American life with a simultaneous reduction in per-capita consumption of energy and materials. The president who exercised that kind of leadership would ensure his or her legacy for all time.

Somehow that doesn't seem likely from any president, let alone a Republican.

Last spring I was invited to speak at one of the leading conservative think tanks, and I asked two questions: What is the core of conservatism if it does not include conservation? And why have the conservatives needlessly and destructively abandoned the moral high ground on the issue? We had a lively discussion. They essentially said the liberals are blue sky, they're big talkers and dreamers, whereas conservatives are problem-oriented, practical people who keep the wheels turning and the world on course. But they're not solving this problem. Too often they don't even admit that the problem exists.

Teddy Roosevelt was a Republican and conservationist. You don't hear much about him these days.

That's right. I believe what happened is that in the '60s the left did, in fact, co-opt the environmental movement. They used it as a club to beat the conservatives, along with the Vietnam War. When Reagan came along, it was already a set piece of the conservative counterargument that the environmentalists were these liberal wackos driving around in Yugos with their knees up to their chests. Once they started that, and scored with it, they couldn't give it up. One reason I wrote this book was to suggest ways in which leading conservative thinkers could get back on board. They say they are big problem solvers, and God knows we need problem solvers.

Do you drive a Yugo?

You have me cornered on this. I drive a Volvo. All Harvard professors are required to drive Volvos.

So I guess you're not concerned about being viewed as one of those liberal, granola-crunching wackos.

I have no fear about attacks from any direction. My writings on sociobiology in the '70s had the implication that ordinary instinctive human behavior does indeed have a biological basis, which in turn originated through a long period by natural selection. At that time, the academic left included many social scientists who based their social programs and reasoning on the assumption that humans are a blank slate, so I was a prime target of the left. And now, promoting conservation as strongly as I do, I'm sometimes a target of the right. I call that a considerable lifetime achievement for an academic. I hope that someday I'll be given credit for that.

But the tenets of sociobiology -- that our personal and social behavior is driven by the forces of evolution -- can't go over very well, for instance, with creationists.

Yes, that's right. It was very curious that I never got attacked by the right on this front. The only reason I could figure out was that leading thinkers in the religious right, including anti-evolutionists who would be most concerned, simply didn't know about sociobiology. It was too arcane, too theoretical. And now, even today, the creationists mostly direct their attacks on fossil evidence that humanity evolved from ape-like forms. They don't get into the intricacies of neuroscience or behavior.

Speaking of neuroscience, do you believe that consciousness itself is also an evolutionary adaptation?

Yes. Proof will require a lot more information about, for example, neuro-circuitry and the nature of memory and emotional inputs in reasoning. Once we get a grip on that, I believe it will become evident that consciousness is a Darwinian adaptation.

What does that do to the notion of the soul? Does that mean you believe there is no such thing?

Yes, in the religious sense. I think the Cartesian notion of dualism between body and soul is dead forever. I'm sorry, but that's the way it is. Which is another reason for having deep thinking about human values and where we want the human species to go.

Well, the human species has certainly grown and prospered from putting the Earth's resources to use. Is plundering those resources an ironic example of survival-of-the-fittest Darwinism as well?

Unfortunately, yes. It's always been to the advantage of people in a Darwinian sense to convert agricultural and grazing land. It's always been an advantage for the short term. But it could be disastrous for the species in the long haul. The great thing about humans is that we're capable of looking far enough into the future to avert tragedy that comes from our actions.

How about evolution as a solution to our environmental problems? Couldn't we evolve biologically to adapt to a seriously deteriorated biosphere?

That's the comic-book scenario. I've actually read people who have said this, without any evident irony. But the notion that we should just go ahead in a blockheaded way -- over-reproducing, destroying the natural environment that our species evolved in and then trying to change our genes as everything winds down -- is a nightmare that no sane person would ever want to take seriously.

Are humans still evolving at all?

No, at least not in any directional sense. But we are changing quickly in another sense. We are changing into a more homogeneous gene pool -- a trend that in a few more centuries could result in a fairly similar human population. The genes that make up traditional racial differences will be more and more shared.

Stephen Hawking recently said that the human race won't last this millennium unless we start to colonize space. Do you agree?

I admire Stephen Hawking but I think he's completely wrong. All of the evidence shows that we can turn Earth into our permanent, safe home. This is where our species evolved. It's what our biology adapted to, in exquisite detail -- our physiology, the way our mind developed.

What about colonizing space just to take the load off a little bit?

Does that mean we could use bioengineering to change human physiology to live in a deteriorated environment?

This raises the question of whether we will be stupid enough to continue to let the environment deteriorate, and not worry about it because we might be able to change ourselves to be able live in a hotter world with more atmospheric pollutants and a different diet. But it would be substantially removed from what we think of as a natural human condition.

If we do everything we can to sustain life on Earth, how much longer have we got as a species?

Oh, I think until the sun dies.

But what if we do stay on the same track we're on now?

Then Stephen Hawking might turn out to be right.

And in that case how long have we got?

It's highly unlikely that homo sapiens will go extinct -- ever -- but we will have lost most of the natural environment, and the species of animals and plants in it, by the end of the century. I don't, however, see it going that way. We can and we will learn to live on this planet sustainably.

You won a Pulitzer for a book called "On Human Nature," and you really believe that?

Yes. I think people are smart enough to act in the global interest when they see it is their own interest writ large.

John Glassie is a writer in New York.