"The Hidden Hitler" by Lothar Machtan

Critics have been far too quick to dismiss this controversial new book alleging that Hitler was gay. 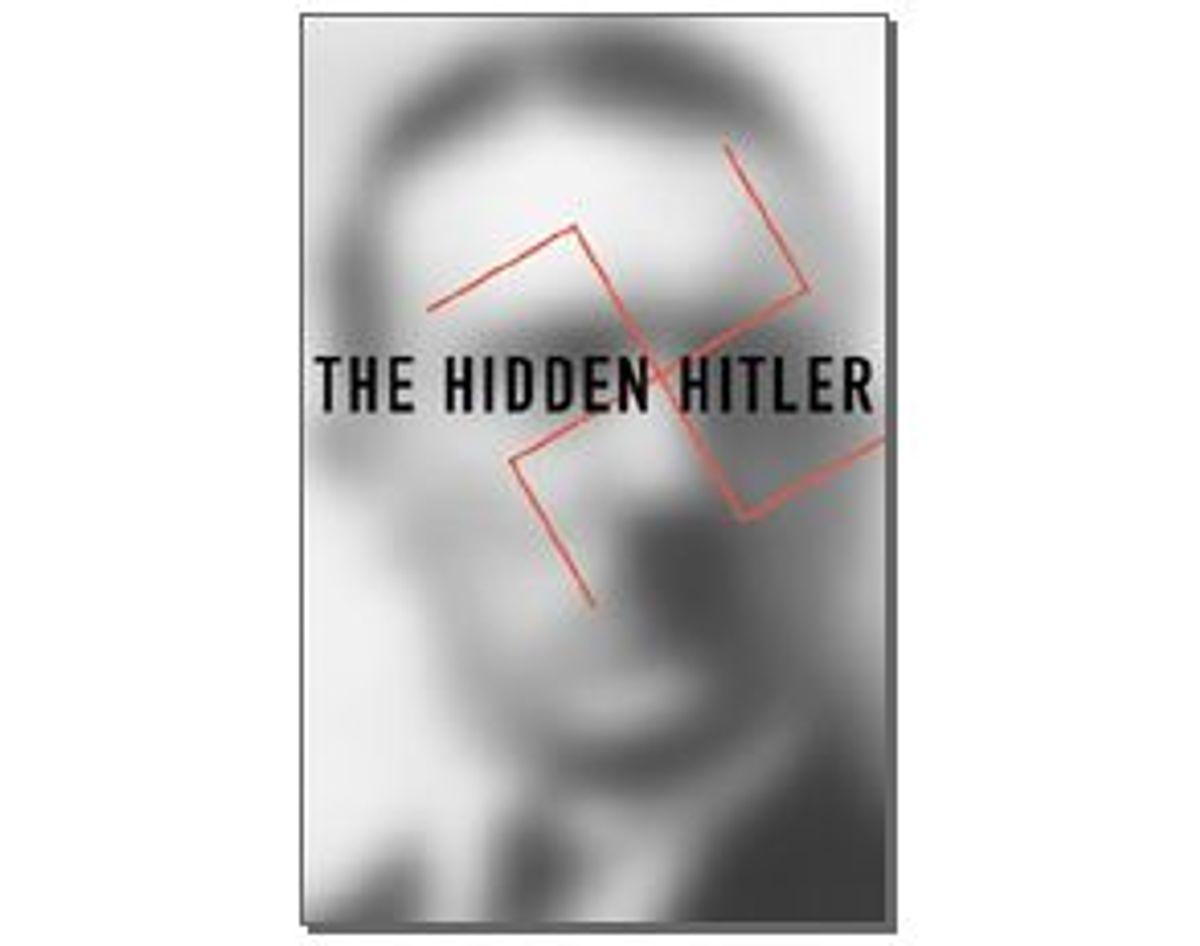 German historian Lothar Machtan has been taking some lumps for his controversial book "The Hidden Hitler," and a great many of them are well deserved. Machtan sets himself up early in opposition to such writers on Hitler as Ian Kershaw (whose conclusion was "Take away what is political about him, and there's little or nothing left") and promises to show us "the whole man," not just the dictator.

Machtan doesn't succeed at this -- it would probably be more correct to say that he never really attempts it. If Machtan had simply called the book "The Homosexual Hitler" and stuck to that theme he would have had a better book and one less deserving of many of the brickbats being thrown at it.

Of course, that would have made it no less controversial, and the unfair knocks being directed at Machtan outnumber the legitimate ones. For instance, in the Oct. 25 Washington Post Book World Geoffrey Giles reprimands Machtan for coming "perilously close to blaming the entire Holocaust on Hitler's alleged sexuality." If this accusation were true, Machtan would be deserving of the same kind of mockery that has always greeted historians who have tried to explain authoritarian personalities in terms of their sexuality (Jonathan Swift satirized the lot of them when he suggested that Alexander the Great tried to conquer the world because all his unused semen had gone to his head).

But that's not what Machtan is trying to do; what he is trying to do is prove that Hitler was a homosexual. Not a maniac or a paranoid -- Machtan doesn't waste steam on what we already know -- but a homosexual, and the major resistance to this idea is coming, understandably, from homosexuals -- who are anxious not to see Hitler's name with "gay" in front of it -- and from sympathetic liberals.

I'm both sympathetic and liberal, but Machtan's case is simply too strong to be brushed aside. In a recent edition of LGNY.com, Paul Schindler points out that when "a print ad for the book that has run in the New York Times bears the headline, 'The first book to reveal Hitler's secret life and its calamitous public consequences' ... it's hard to escape the conclusion that anybody connected to the marketing campaign must have recognized that such a tease certainly suggested a link between homosexuality and the 20th century's most despicable crimes. In fact, media reaction to the book has played up exactly that link."

Schindler is right; he's also right when he holds the author and his publisher at least partially responsible for teasers like the one used on an Oct. 15 interview with Machtan on the "Today" show, which told viewers they were about to see an interview with an author whose book claimed that "Hitler was actually gay, and that his homosexuality was at the root of his evil." Everyone involved in selling the book should have been more responsible. But bad marketing doesn't make a bad book.

The problem here is that Machtan's book is being judged by its hype. And when you look past the hype to the book's central thesis you are left with the unshakable conclusion that Machtan is on to something. You may well ask why, with the thousands of books written on Hitler, no one else has caught on to this. The answer is that much of what Machtan says has been written about before and that many people have shared his opinions for decades. (Did anyone think the image of Hitler as flaming queen came solely from the fertile imagination of Mel Brooks?)

Several of Machtan's most reliable sources (including the classic biographies by Joachim Fest and Alan Bullock, as well as Bullock's dual biography of Hitler and Stalin) have raised many of the same points as Machtan has, though their authors chose not to emphasize them or pursue them at length. Why? Possibly for no more reason than that their author's interests lay elsewhere. As Voltaire is said to have said, history does not change, but what we want from it does.

If Machtan's tone toward his evidence in "The Hidden Hitler" is defensive, one must grant him at least a modicum of sympathy. Virtually anyone in Hitler's life who might have supported Machtan's argument with harder evidence was ruthlessly exterminated (such as his longtime colleague and head of the paramilitary SA group Ernst Rohm, a known homosexual who appointed known homosexuals to positions of power within his organization), while many others disappeared or committed suicide (including Eva Braun, Martin Bormann, Heinrich Himmler and Hermann Goering).

By no means all of these potential witnesses died by Hitler's order or under suspicious circumstances, but the sheer number of the ones who did, particularly those cronies from Hitler's early years about which we know remarkably little, is staggering. "Hitler himself," writes Machtan, "tore the crucial pages out of his life story. In this he was no different from other prominent homosexuals. What was peculiar to his conduct was simply the ultra methodical and unscrupulous way in which he eliminated every threat of exposure."

It can and is being argued that the absence of material on Hitler's past stands as proof of no particular thesis, let alone as proof of his homosexuality, and this is true (though there can be no doubt that Hitler was frantically trying to cover up something in his past). But "The Hidden Hitler" works better if the reader is willing to disregard the author's often aggressive tone in pushing his argument and simply consider the evidence.

Machtan's most intriguing contribution to the subject is the so-called "Mend Protocol," testimony from a dispatch rider named Hans Mend who had served with Hitler in the First World War and swore that he witnessed Hitler engaging in homosexual acts. This evidence isn't as solid as the author thinks it is; Mend was later discovered to be a liar and blackmailer. But one is entitled to point out that anyone who would be involved with Hitler would almost certainly be some kind of liar or scoundrel (and in any event Mend seems to have had no reason to lie about Hitler several decades later).

More to the point, though, is that anyone interested in knowing the truth on this subject ought to grant Machtan credit for assembling so many persuasive strands of evidence. Evidence, of course, is not proof, but merely the building blocks which must be considered in constructing the truth, and as Machtan's critics are insisting, most of his is circumstantial. But if Machtan's hard evidence isn't as hard as he insists, neither is his soft evidence so soft as his critics contend. For one thing, most important criminal cases, to say nothing of most great historical judgments, are decided on the basis of circumstantial evidence, so we should not be quick to deride all judgments based on it.

In and of themselves, perhaps none of Machtan's points prove his thesis. Perhaps it means nothing that as a youth in Vienna Hitler frequented the same areas that were notorious for homosexual activity. It may simply be coincidence that Hitler and his best friend lingered around Bayreuth, worshipping Wagner along with gays from several European nations. It may be a failure of historical research that we can't place Hitler in anything resembling a normal relationship with a woman prior to Eva Braun. Perhaps we are misreading Hitler's boyhood infatuation with August Kubizek to suggest it was homosexual in nature. Perhaps Mend and numerous other witnesses who swore that Hitler had homosexual tendencies were seeking revenge or trying to sell sensationalistic stories to the international press. But is it possible that all these stories, all these possibilities, all these indications are wrong, that they are simply the concoctions of sick or vengeful or headline-seeking minds?

The flaws in Machtan's presentation should not be confused with errors of research. It will probably fall to those better qualified than Machtan in areas of sex and psychology to take the next step and tell us how Hitler's homosexuality (or at least his frustrated homosexuality) affected his political doctrines, but from here on historians are going to have to contend with Machtan's conclusions. As John Lukacs was fond of saying, "We are not finished with Hitler."