"Sympathy for the Devil" 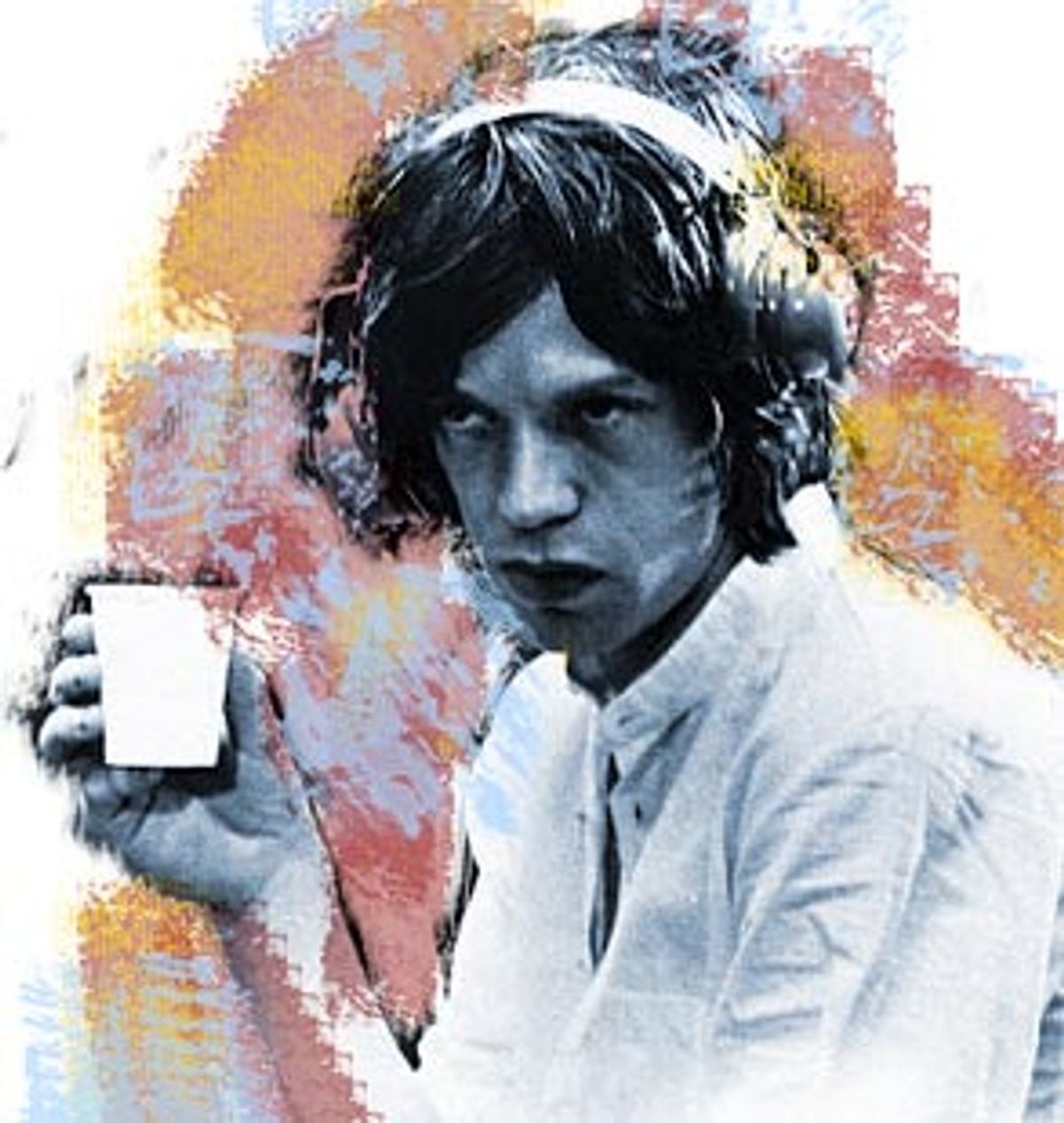 While the Beatles dominated pop in the 1960s, their music was nearly devoid of one vital element: darkness. At a time when authentic blues was still relatively unknown (and also not widely available) to most white kids, those who craved the seductive complexities of the dark side turned to the Rolling Stones. And nothing more vividly illuminated the group's supposed affinity for Lucifer than "Sympathy for the Devil," their anthem-cum-incantation in the form of a taunting cultural fable. It was the first cut on the A side of "Beggar's Banquet" -- which now, 33 years later, still stands as not only one of the Stones' finest albums, but one of the best rock records ever made.

Released on Dec. 5, 1968, "Beggar's Banquet" came out just 10 days after the Beatles' White Album, and a year and a day before the Stones' notorious free concert at Altamont Speedway in Livermore, Calif. (Contrary to popular legend, "Sympathy for the Devil" was not the song being played when a young man was killed at the free concert. The band was knocking out "Under My Thumb" when 18-year-old Meredith Hunter was stabbed to death by a member of the Hell's Angels motorcycle club. Several Web sites reference Don McLean's allusion to this incident in deconstructions of his song "American Pie": "Oh, and as I watched him on the stage/My hands were clenched in fists of rage/No angel born in Hell/Could break that Satan's spell.")

The Stones have made plenty of mistakes over the years ("Their Satanic Majesties Request"), but producing a rock opera wasn't one of them. Though "Sympathy for the Devil" is embedded with enough historical and philosophical scope to seem like the opening act to a drama of operatic dimensions, they wisely kept it to a concise six minutes and 22 seconds. In interviews, Mick Jagger -- who wrote "Sympathy" ("I wrote it as sort of like a Bob Dylan song") without his usual writing partner, Keith Richards -- has said he was concerned at the time about the potential for the lyrics to come off as pretentious and the band to be "skewered on the altar of pop culture." So when Richards suggested changing the rhythm, Jagger agreed and as the band worked (and worked and worked) on the piece, it ended up as a samba, which Jagger has called "hypnotic" and Richards referred to as "mad."

Jagger, a voracious reader and history buff, claimed he was influenced in writing "Sympathy" by Baudelaire. But he was also, as others have pointed out, clearly under the spell of Mikhail Bulgakov's classic allegorical novel of good and evil, "The Master and Margarita." Of course Jagger was even more clearly under the spell of the 1960s, a time when -- for many -- heaven and hell seemed to have come to earth in the most lucid terms.

The song's opening -- "Please allow me to introduce myself, I'm a man of wealth and taste" -- parallels the beginning of Bulgakov's novel, in which a sophisticated stranger, who turns out to be Satan, introduces himself to two gentlemen sitting in a Moscow park as they're discussing whether Jesus existed or not. ("'Please excuse me,' he said, speaking correctly, but with a foreign accent, 'for presuming to speak to you without an introduction.'") The song then references Christ and the story of Pontius Pilate, which the novel takes up in its second chapter. Before moving on to the Russian Revolution, the song's narrator, Lucifer, acknowledges that his listeners are mystified -- "But what's puzzling you is the nature of my game" -- just as, in "The Master and Margarita," one of the men approached by Satan in the park thinks to himself, "What the devil is he after?"

In the lyrics for "Sympathy," Jagger's narrator jumps from making "damn sure that Pilate washed his hands and sealed [Jesus'] fate" to St. Petersburg, "When I saw it was time for a change," and kills "the Czar and his ministers." Curiously (or not so curiously, given Jagger's penchant for reading history), the only other allusion in the song to Russia's dark past is an odd one: "Anastasia screamed in vain" -- a reference to the youngest daughter of the czar who was murdered with the rest of the Romanov royal family. For most of the 20th century Anastasia was an almost mythological figure, thanks to the specious claims that she alone had survived the murders.

But more interesting than what appear to be direct correlations between the book and the song is how Jagger and the Stones, drawing on numerous influences, Bulgakov's novel apparently among them, managed -- in a rock song -- to address serious, even profound, ideas to a samba beat without turning the whole affair into an exercise in dull earnestness. On the contrary, "Sympathy" sounds like a party and works so well, on multiple levels, because its lyrics evoke more than they spell out, while the music not only has an infectious rhythm, it features ingenious layering of sound and background vocals that build to an irresistible, kick-ass tribal hootenanny. Those "woo woos," by the way, which provide a self-deprecating, cartoonish poke at the song's spookiness, while adding to the chanting-around-the-bonfire nature of the music, were provided by the four demons themselves, along with two members of the Stones' 1968 coven -- Anita Pallenberg and Marianne Faithfull -- and the album's producer, Jimmy Miller.

In writing the song, Jagger used words with impressive economy. He cites Jesus Christ, Pontius Pilate, the czar, Anastasia, the blitzkrieg (World War II), the Kennedys and the city of Bombay and mentions Lucifer by name (just once) and in so doing creates a deep, amplified portrait of a world torn by religion, war, assassination and confusion where "Every cop is a criminal/And all the sinners saints." Threaded throughout are taunts from the teasing narrator -- the traditional demon trickster -- trying to get the listener to speak his name: "Hope you guess my name," "Tell me, baby, what's my name?" "Tell me, sweetie, what's my name?" And -- at the very pinnacle of the Flower Power era, remember -- he then turns on his starry-eyed audience and tells them that they, in league with him, are to blame for the deaths of the '60s most promising political leaders.

But lest you think Jagger simply mixed up some brainy lyrics and threw them into a recording studio with his talented, stoned friends, take a look sometime at the strange little cinematic time capsule "One Plus One," a documentary on the recording of "Sympathy for the Devil" (among many other things). The film, which has been distributed in two versions, was directed by Jean-Luc Godard, and it's had a tempestuous history, which I won't go into here except to say that one version, known by the same title as the song, is not Godard's cut. That's the version generally available in the U.S. Anyway, whichever version you view, you'll see the Stones as they work with meticulous attention to detail to record the tracks and build the elaborate song.

Not surprisingly, given its distinctive sound and eternal-hot-button subject matter, "Sympathy" has taken on a life of its own (and isn't that just what that doggone devil would want?). It's been recorded by Bryan Ferry, Guns 'n' Roses, Natalie Merchant, Jane's Addiction, the Hampton String Quartet, the band Laibach (which devoted an entire album to different versions of the song) and, believe it or don't, the London Symphony Orchestra. It's worth pointing out that Rolling Stone magazine's take, in its review of Ferry's cover of the song ("'Sympathy' has always been recorded with, if not seriousness, at least earnestness"), is dismissive of both the Stones' version and Jagger's lyrics, which Rolling Stone called "slightly corny, vaguely ridiculous."

On the other hand, just last month Ron Rosenbaum wrote an article in the New York Observer in which he extols Jagger's abilities as a lyricist and specifically mentions "Sympathy for the Devil": "And let's not forget," Rosenbaum writes, "at this particular moment, that he's one of the rare rock songwriters who has addressed the question of evil and apocalypse in a sophisticated way." Rosenbaum goes on at some length to praise the singer's "beautiful use of incantation ... a lovely word for a special kind of vocal recurrence, one that combines overtones of prayer, magic, spell casting ... a kind of vocal voodoo."

The song's title continues to have almost iconic status and gets all manner of uses. It has been appropriated for a computer game ("Sympathy for the Devil: The War in Russia, 1942-43") and is tiresomely used whenever possible to headline stories about Jagger's marital woes and paternity suits or anytime bad behavior is the subject. For example, these, all of which appeared in the New York Post: "Jagger's Ex Has Sympathy for the Devil," "No Sympathy for Devils" and "Sympathy for the Devil: Why Bill Is No Hypocrite" (an article by P.J O'Rourke). To this day, "Sympathy" is widely discussed online on sites like the Christian Music Forum and referenced in treatises on the devil, such as John P. Sisk's paper, "The Necessary Devil" in First Things: A Journal of Religion and Public Life.

Jagger concedes that the song may have been something of an inspiration for all the '70s and '80s heavy metal bands that flirted with Satanism, but in interviews he's repeatedly distanced the Stones from any of it. In an exchange with Creem magazine, he said, "[When people started taking us as devil worshippers], I thought it was a really odd thing, because it was only one song, after all. It wasnt like it was a whole album, with lots of occult signs on the back. People seemed to embrace the image so readily, [and] it has carried all the way over into heavy metal bands today."

Regardless of, or maybe because of, the swath it has cut, "Sympathy for the Devil," as good art often does, continues to resonate at least as strongly today as it did when it was first created. Woo woo.