Are the Grammys heading for a fall? 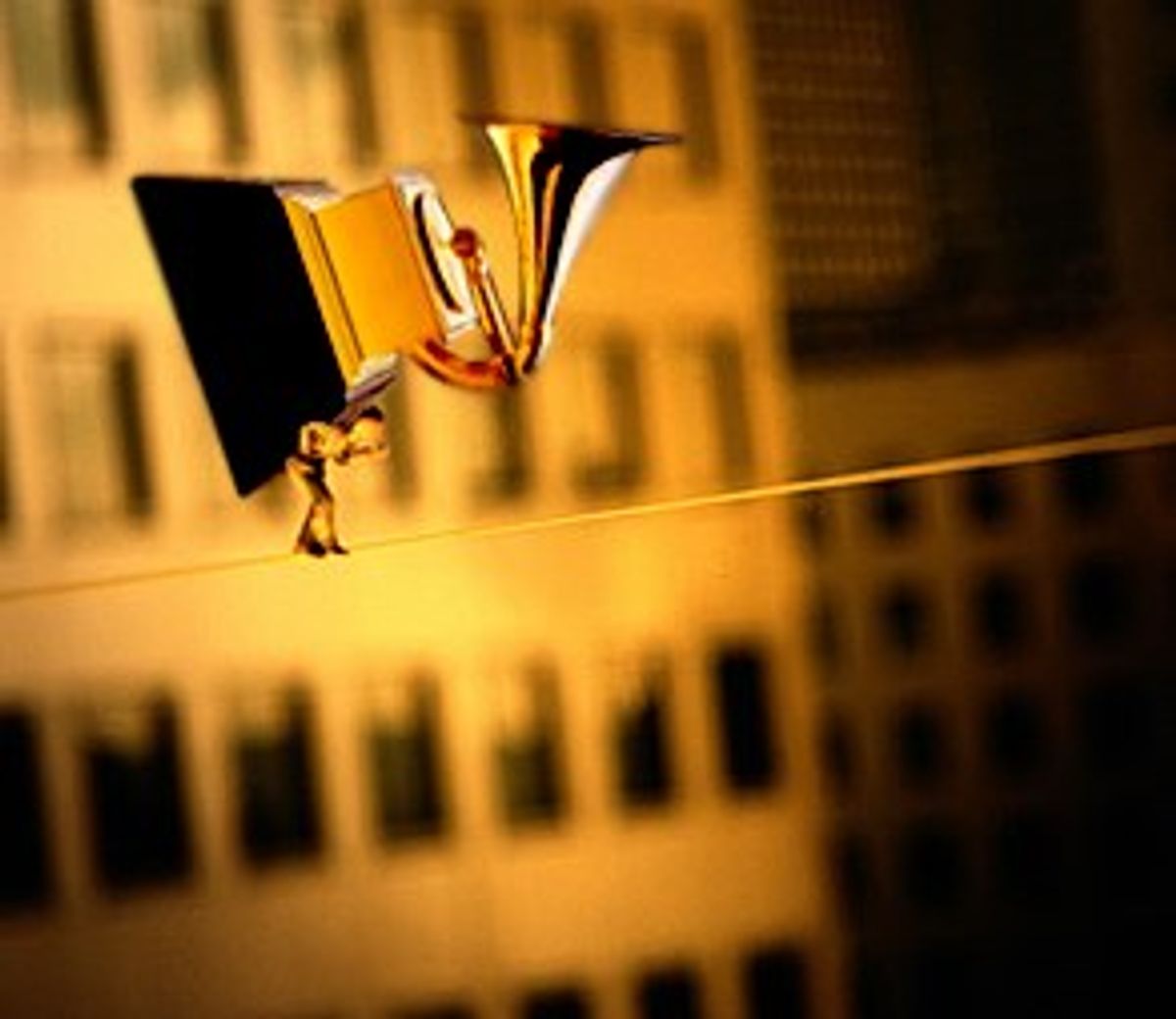 Now that the annual Grammy nominations have been announced, the real challenge begins for the award show's producers: They have to turn the night into a prime-time ratings hit for CBS. They'll do that by sifting through the hundred-plus nominees and picking the most compelling mix of artists to perform.

At the same time, record-label presidents and artists managers will be banging the Grammy door trying to secure prized airtime for the selected few. Why? It's an honor to perform. More important, it means an instant, and often serious, sales bump for acts. And not just here in the United States, where between 20 million and 30 million viewers tune in, but internationally, where more than 1 billion people may be watching.

"It's a huge stimulus for sales," notes Danny Goldberg, chairman and CEO of Artemis Records, and the former president of Mercury, Warner Bros. and Atlantic Records.

But it's also "the hardest TV booking you'll ever get," says one major label publicist, busy trying to get a handful of her nominated acts up on a Grammy stage. (And expensive; labels have to pick up the tab for those costly, six-figure production numbers.)

But Grammy producers have bigger concerns than fighting off record-company flacks. As the sagging music industry discovered in 2001 -- experiencing its first sales downturn in a decade -- today's top acts are having trouble reaching blockbuster status. In 2001, not a single CD sold more than 5 million copies, according to SoundScan, the company that tracks album sales for the industry. In 1999, seven different titles reached that lofty mark.

In other words, true star quality remains in short supply, and the Grammys have to play the hand the music industry deals them each year. So how do producers turn this year's crop of underperformers into prime-time stars?

Last year the show was blessed with the mass-market controversy surrounding Eminem and his hateful rap lyrics. His Grammy performance -- with a previous generation's star, Elton John, sitting in -- created a deafening drumbeat of publicity. (Both CNN and Fox News took time to debate the telecast). Besides Eminem, that show boasted additional Grammy performances by Madonna, Destiny's Child, U2, 'N Sync, Macy Gray, Paul Simon and Faith Hill -- yet the show's ratings were still down slightly from the year before. (The program serves as an important anchor during February sweeps period for CBS, which pays a reported $20 million for the domestic broadcast rights each year.)

A not-undeserving list of eclectic artists? Sure. A recipe for a Nielsen ratings nightmare? Perhaps.

None of these nominees has been guaranteed airtime; the Grammys has not yet announced who has been tapped to perform. But there are two multiplatinum stars who also garnered lots of nominations this year and are virtually assured of one of the roughly 15 performance slots come Grammy night: R&B newcomer Alicia Keys and U2.

Both will provide a big viewer boost, right? Yes and no.

Keys' debut, "Songs in A Minor," has sold in excess of 4 million copies and she's proven with two radio successes this year that she's more than a one-hit wonder. But with just one album to her credit, the ghetto soul singer still lacks the name recognition of a Madonna or a Whitney -- or even a J.Lo or a Britney -- to attract channel surfers.

(Same goes for multiplatinum metal-rap band Linkin Park. They're up for a best new artist Grammy and their album sold an astonishing 4.8 million copies last year, more than any other artist in 2001. Yet the band's name still draws mostly blank stares beyond the 12-to-25 set. It's a common quandary for today's increasingly faceless rock outfits. Can you name a single member of Linkin Park, Staind or Nickelback? Strange, since they sold more than 10 million albums last year combined.)

As for U2, there's bound to be a very strong sense of déjà vu come Grammy night: The band went home with three statues on last year's telecast for "Beautiful Day," a song that was released in late 2000 in advance of the group's album "All That You Can't Leave Behind." The single made last year's Grammy deadline cut; the album did not.

But Grammy producers want more than anything to make the Grammy performances unique, not something viewers have already seen done on Leno, Letterman or "Saturday Night Live." U2 have made a lot of prime-time TV appearances recently; the group played last year's Grammys, halftime of an NBA Finals Game, MTV's Music Video Awards and the Sept. 11 benefit telethon. Plus, the band is scheduled to play halftime at the upcoming Super Bowl. Come Grammy night, will casual music fans consider another U2 performance must-see TV?

And then there's the mud fight between the Grammys and the cheesy American Music Awards, produced by Dick Clark. (The AMAs, created by ABC back in 1973 after it lost the rights to broadcast the Grammys, are awarded on the basis of fan popularity. The Grammys, awarded by the National Academy of Recording Arts and Sciences, are, for better or worse, voted on exclusively by people who are in the business of making records.) Clark filed a $10 million lawsuit against Grammy chief Michael Greene last December. The charge? That the Grammys unfairly kept superstar acts off Clark's program, by telling artists that a televised appearance on the AMAs in January ruins any chance the acts have of singing on the Grammys come February.

As Greene, in his usual brashness, told Billboard a few years ago, "Artists who perform on the AMAs might as well buy a ticket to the Grammys, because it's unlikely they'll be performing on our stage."

He's unapologetic about the Grammys' position because the show has learned the hard way that a been-there, done-that lineup attracts a smaller Nielsen audience.

In 1994, the year of her "Bodyguard" soundtrack triumph, Whitney Houston performed on the AMAs, while winning eight awards. The next month she was given a prime, opening performance slot on the Grammys and ratings were hurt during that 15 minutes. Ever since then the Grammys have played hardball.

(The policy has been adopted by others; last fall "Soul Train" creator Don Cornelius filed a complaint with the Justice Department, accusing MTV of blacklisting from its annual "Video Music Awards" performance lineup any acts who sang on the competing "Soul Train" awards show.)

The NARAS tactics seem to be working. In 1993 the AMAs attracted 35 million viewers compared to the Grammys' 30 million. In 1996 the shows had the same size audience. Last year, the Grammys were seen by 27 million viewers here at home, compared to just 16 million for the AMAs, according to Nielsen Media Research.

Over the years, Clark complains, the AMA has lost out on performances from Toni Braxton, Puff Daddy and Britney Spears; all backed out at the last minute when faced with an us-or-them ultimatum from the Grammys. (Grammy nominations are announced just one or two weeks before the AMAs air.)

What drove Clark to court was this year's wrangling over the King of Pop. According to the lawsuit, Michael Jackson, whose comeback album "Invincible" was released last year, had verbally agreed to perform on the AMAs and receive an "Artist of the Century" award.

The booking would have been one of the AMA's biggest coups in years. Even though Jackson's album has been only a modest sales success, he continues to be a TV magnet. His prime-time CBS concert special in November, "Michael Jackson: 30th Anniversary Celebration," was a blockbuster, attracting 28 million viewers.

Then came the call from the Grammys, and Jackson backed out of the AMAs. Clark went to court, crying foul. Within weeks of filing the suit, Clark announced that Jackson had personally called him to say he was a man of his word and that he would be at the AMAs. According to Clark, who was quoted in the Boston Globe, Jackson told him, "I will not appear on the Grammys."

But, as it turned out, Jackson only accepted the AMA award; he did not perform on the show, thereby keeping his options open with the Grammys. And according to Greene, Jackson's still in the running for a performance slot. (He managed to squeak out a single nomination, so he qualifies.)

So will Jackson end up on the Grammys come February? Here's the key number to keep in mind: 11 million viewers. That's how many people tuned in to watch the repeat telecast of his concert special last Wednesday night. Or, 17 million fewer than watched in October.

CBS's rebroadcast of Jackson's concert special was slated to counterprogram against the AMAs. The big selling point for the show was new footage, including a duet with Britney Spears that did not air last fall. (Surprise -- she lip-synced her half of the duet.)

Why the embargo? At the time, Spears was promoting an exclusive, upcoming concert with HBO, under the terms of which she was reportedly forbidden from performing anywhere else on TV. Now that that 30-day ban has expired, her duet was added to the Jackson show. (Spears herself committed early in the process to perform on the AMAs and bypass a chance at a Grammy slot, a smart move since she didn't land a single Grammy nomination.)

Back to this year's lineup. Looking at the nomination list, here are some suggestions for who should perform:

The Grammys will be televised Feb. 27.