Will rocking the boat rock her world?

Today's lesson: The intoxication of a new affair inevitably melts away. This is the transformation, not the tragedy, of love. 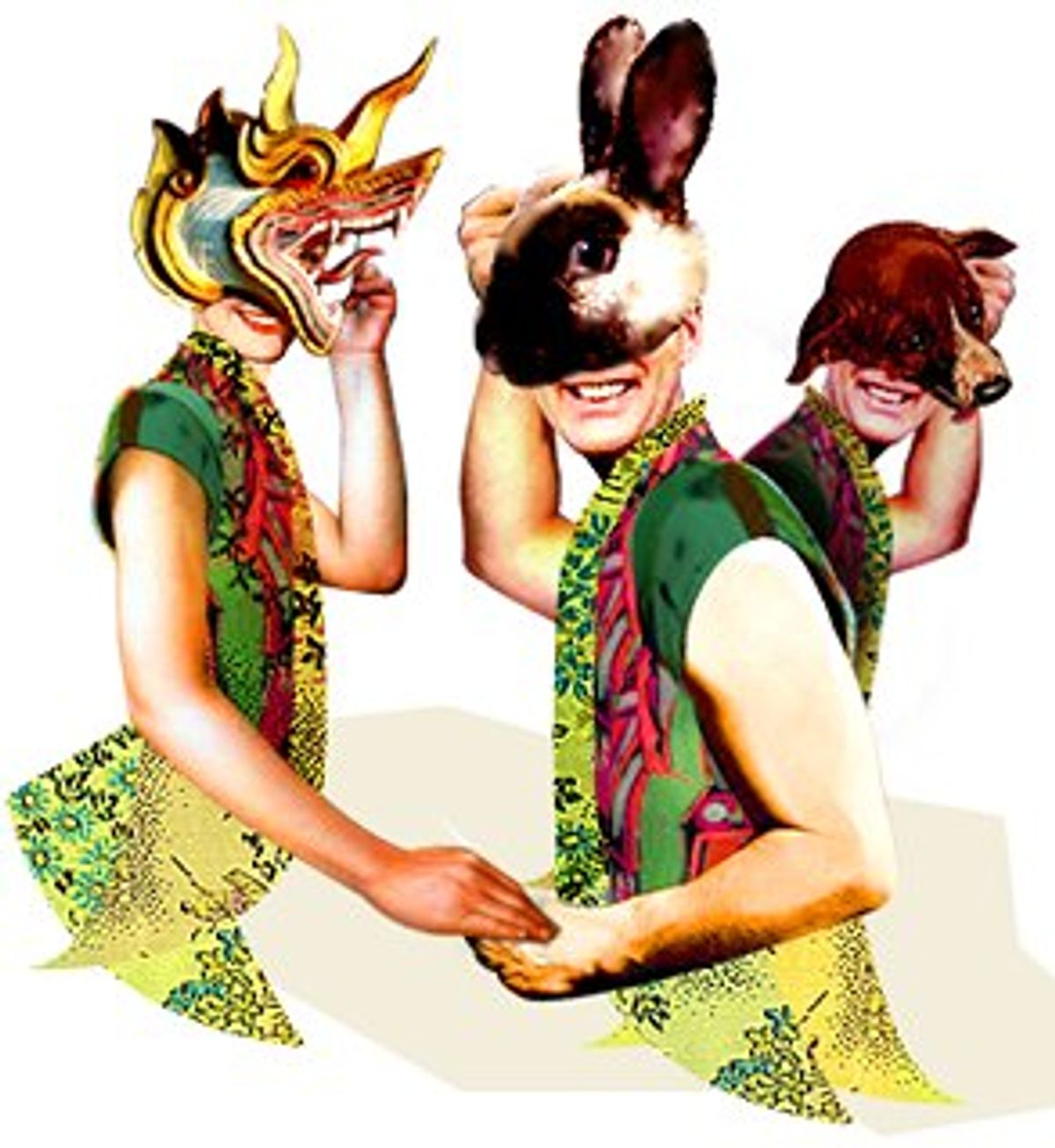 The stars make us susceptible to many different kinds of love, and stir up different types of attraction. It's easy to be drawn to more than one constellation -- just think of Zeus! But what do you do when you've found love with one sign meld, but stumble into a powerful attraction to another meld that seems better attuned to you? Can you flirt with other appealing constellations without getting sucked into a black hole? This week, Ottilie, a Gemini Dragon married to Edward, a Libra Rabbit, finds herself tempted by Fritz, an alluring, confident, funny Pisces Dog. She is confused and worried about what she should do, or if she should do anything, to further her friendship with Fritz. Will magnetic affinity trump fidelity? If Ottilie slips, would Fritz's sign meld make sparks with hers long-term, or would their affair fizzle out -- and leave her with burnt fingers? And can fair-minded, observant, passive Edward give Ottilie enough fire to keep her around, and keep his own toes toasty? Read and decide for yourself.

Ottilie writes, "I'm married to Edward, but I'm curious about Fritz. What's up? Why do I suddenly feel like a snow globe that's been shaken really hard? Should I stay with Edward or what? And could Fritz have any sort of place in my life, platonic or otherwise? Or would I get bored with him?"

The stars would say that Edward is likely to be a more trustworthy husband than Fritz would be for Ottilie. He doesn't seek a very active social life, he likes to build a soothing, pleasing refuge for a home and relax with his wife, children and trusted friends and colleagues in his downtime (but probably not his parents, whom he may not get along with). However, he may not be much of a romantic. Rabbits are duty conscious (and since Edward was born in the hour of the Rabbit, he should be doubly so), quiet, cerebral, loving, highly intuitive, tactful (aware of what's proper, socially), but they're also sulky and easily offended. The Libra influence will keep him from being as passive-aggressive as some Rabbits can be, but will not help make him any more talkative; Libra males tend not to show their feelings, and since Rabbits feel a lot, Edward's probably hiding a lot of emotion. Rabbits admire Dragons as long as they feel secure in the Dragon's love; they are very good at nurturing and at feeding the ego of their partner. Meanwhile, Dragons respect Rabbits for their steadiness and tact and beauty, but have trouble when their Rabbits turn needy or gloomy. Dragon-Rabbit is a relationship that takes a lot of mutual understanding, but does have built-in compatibility.

Ottilie may feel there isn't enough romance in her marriage because Edward, being a Libra Rabbit, gives her too little feedback. Her Gemini Dragon meld makes her a spicy, lively, inconsistent personality who craves attention and variety, and wants to do stuff. Edward is a calmer personality, who probably admires Ottilie but is too undemonstrative by nature to make a big show of it. Ottilie may fall into criticizing Edward because he doesn't vary his personality much, which makes her feel stifled; an even keel can vex a playful Gemini Dragon who wants to rock the boat. Watch out with the criticism if you have a Rabbit; it takes a lot to make Rabbits disloyal; they will put up with much, but they're easily hurt, even if they don't show it, and they have long memories. It's sadistic to toy with them.

As for whether Ottilie might get bored with Fritz, the Pisces Fire Dog: Gemini Dragons won't like to hear it, but every romantic attachment fades in intensity over time; if it didn't, nobody would get anything done; everyone would just stay at home watching videos and secede from society. Fire Dogs are passionate, entertaining, sexy and charismatic, but not necessarily loyal (Bill Clinton is a Fire Dog). Pisces men are subtly alluring; they have a magical way of making a woman feel needed that many women find irresistible. On the other hand, some Pisces men are as deceptive as they are attractive; they drink, lie or misrepresent themselves one way or another. They lack self-control, and seek a partner who will pamper them, and put up with a lot of nonsense. (Pisces women are totally different, I should add here, eminently honorable.) So, a Pisces Fire Dog looks like someone who'd be tremendous fun to play with, but dangerous to mess with -- particularly for a woman in a relationship with another man. Also, Pisces is discreet; Dog, less so. Dogs are fun, sexy and clever; but their loyalty shifts a lot. There are exceptions of course, but by nature they're not as likely to be one-woman men as Rabbits are.

Anyway, as Ottilie had better learn soon, if she is to be happy over time, even the most burning passions evolve into more or less passionate friendships. As you get to know and trust another person, part of the breathless intoxication of a new affair, which comes from all that is unsure about the other's character, inevitably melts away. This is the transformation, not the tragedy, of love. Because Ottilie's Gemini Dragon sign is hungry for life and change, she will always crave newness, and seek new ways to prove her effectiveness. That means she should try not to base too much of her zest for life on her love relationship. She should get involved in projects she cares about -- take a painting class, a cooking class, a language class, start a book group, travel. It's not just Edward; Ottilie is probably understimulated, period. Her temptation to stray is evident, but her Ox birth hour means that she is probably traditional enough that she would feel guilty if she did; Oxen are conservative and traditional, and not so skilled at intrigue. On the other hand, Oxen are stubborn, and so are Dragons, so if Ottilie decides it's the right thing to do, she'll be hard to stop. One thing she might consider; there's a reason she chose Edward as a husband. Did his calm, reassuring Rabbit Libra-ness help stabilize her overexcitable Gemini Dragon nature? Would a more volatile meld, like Fritz's Pisces Fire Dog, excite her or distress her over time?

Good luck, Ottilie, and remember, as always -- all this is just a hunch!