At the Sar Shahi refugee camp, the thousands of widows, amputees, children and unemployed men who occupy the acres of patchwork tents find themselves in assistance limbo. 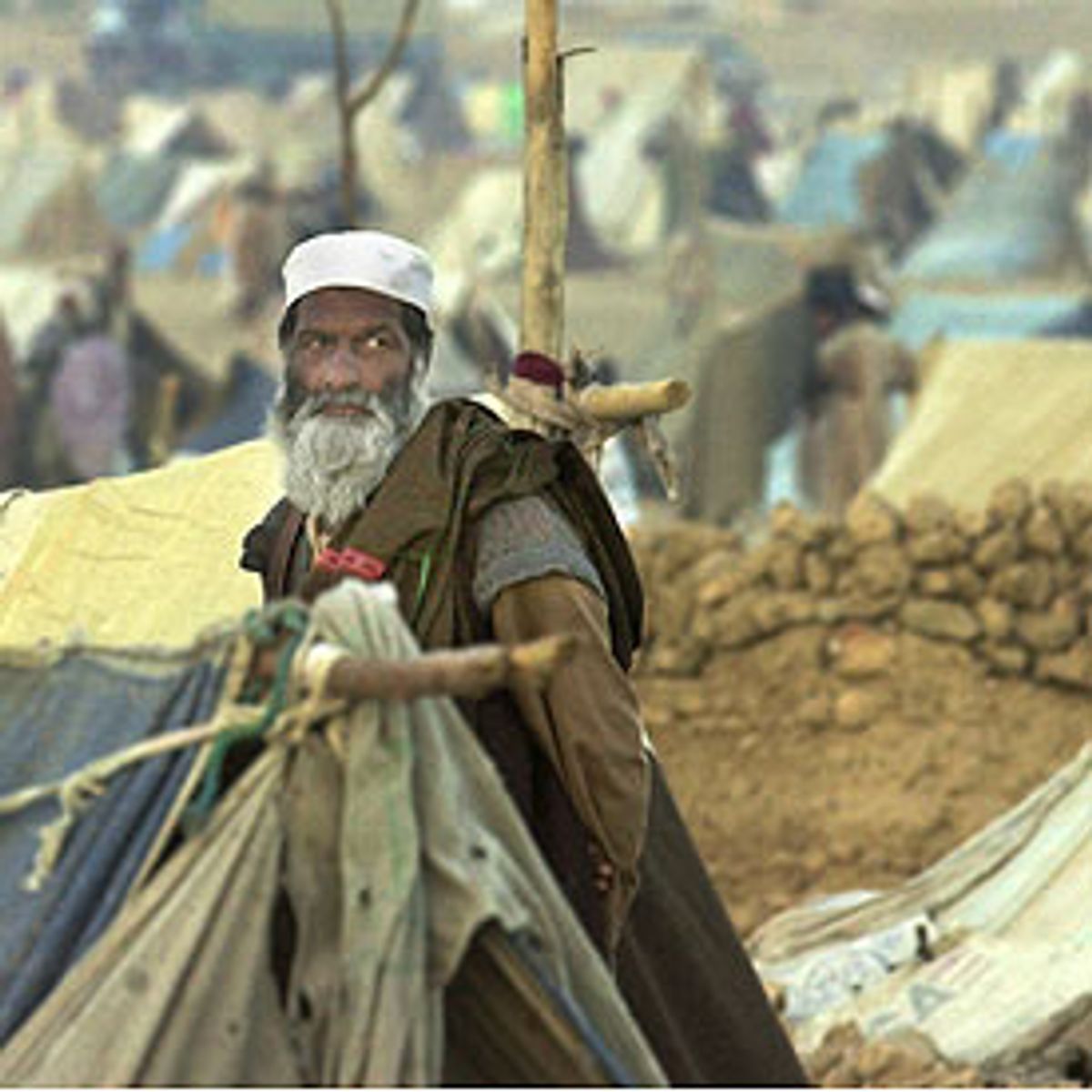 At the Torkham border, there was the usual dust, the men with guns, children begging for money. Eddies of people going in every direction. What else can be said about chaos? It was clear that some serious money was changing hands and this wasn't even the drug trade; this was simply the usual smuggled goods moving into Pakistan from China and Russia, the drivers evading customs duties. Jalalabad and Peshawar, Pakistan, were married to each other through the cash and the merchandise, which has been the situation for centuries, and so they thrived. It's the silk road with Russian trucks and Toyotas, and this gives Torkham a rough feel to it, like a port city.

Manzoor, the malarial fixer, wandered away with the driver and the security guard, leaving me standing before the barrier. Before I crossed the frontier, I asked him about the road to Jalalabad, and how dangerous it was, because in the Pearl Continental Hotel, a National Geographic photographer said that the road was certain death, especially for someone making the trip alone. What he said put the fear of God in me, reviving the perpetual question, "What lifesaving piece of information does he have that I don't." The night before, Id gone up to the fifth-floor lounge of the P.C. looking to bum a ride in a convoy, but had no luck. Manzoor was now telling me that I could take a cab to Jalalabad from Torkham, no problem. It was a shock to discover that there was regular cab service, but it's true. My colleague with the fright speech had no information at all.

Aman puts down his gun

The border gate goes up, and I walk over to the customs hut run by Hajji Kadir's men. After greeting everyone, a man introduces himself in English, enters the number of my passport in a stained ledger and says, "My name is Aman, and I'm a translator."

"OK, which languages do you speak?"

"English, Russian, Pashto and Dari and a little bit of Japanese."

It turns out that Aman is not only a government border official and former member of the mujahedin under Abdul Haq, he's also famous. Aman found the al-Qaida chemical laboratory for a British correspondent who writes for the Mirror, and knows a good portion of the foreign press by name. When I met him, he was assisting Hajji Kadir's provincial government with the border traffic, but wasn't earning a salary. I told him I thought we could try working together. Aman, wanting to clinch the deal said, "Do you accept me as your translator?"

"OK, no problem," he said, and very gingerly put down his pistol on the customs table. Aman worked for the government one minute and a foreigner the next. Not all that strange a transition in Afghanistan.

Hiring a translator is like getting married -- blow it and the trip is a nightmare of misunderstandings and missed opportunities. Trust is essential, and it cannot be bought, since it's an ephemeral vibe between people. I liked him, so we shook hands and went outside to find a cab and a tribal fighter to ride with us into Jalalabad. Across the road, there was a dilapidated Japanese minivan, reupholstered with Afghan carpets, and we all climbed into it and went rocketing down the side of the mountain toward the valley floor. This is how it starts.

As we bounced along the road, coming down out of the pass the country revealed itself. Jalalabad sits in a valley of green fields and small stands of leafless trees. It was a shock after Kunduz and Taloqan to find it so green. Like the north, the mountains go up like blades on all sides, but it's different here. It's easy to see why people stayed.

Halfway to Jalalabad, we came across a refugee camp at a place called Sar Shahi, and turned off the road. At the camp security office, Meheraban, the commander in charge of security said that the camp had about 3,600 people, with several hundred very recent arrivals. As we talked, it became clear that they come from all over the country, and they are still coming.

We walked into the mass of tents, most of which are made out of scraps of plastic that have been sewn together to make a sheet large enough for a few people to sleep under. Partial words are visible in the sheets, names of aid agencies, names of donating countries. Acronyms from Europe and the U.S. Row after row of haphazard dwellings that offer no shelter against the bitterly cold nights. And it makes the people sick. There is no proper heating in the Sar Shahi camp, since many of the refugees don't have proper stoves for tents. And the victims of this situation are widows, amputees, children and unemployed men, as some had ended up as refugees by being on the wrong end of the war. Thousands of them. Sar Shahi is not one of the biggest camps but it seemed gigantic, waves of patchwork tents would appear over rises where the camp should have ended.

Meheraban said that I could speak to someone from Tora Bora, the place where most of the recent arrivals were coming from, and after turning down a rutted track, we found him. Shielding his eyes from the sun, Heruddin, a 75-year-old man, said, "I had 13 members of my family, and seven were killed in Tora Bora during Ramadan. My home is completely destroyed. Where should I go?" When I asked him what he had to eat during the day, he told me simply that they didn't get enough food, that he only had a little vegetables and rice. "Sometimes people give us a little food," he said. Heruddin's wife spoke to me in a pleading voice and started to weep. Heruddin then asked me if there was a way to get him a proper tent, and could I please speak to the authorities for him. He wasn't begging, he was dignified and it was a reasonable request.

Heruddin is one man who needed a tent, and there was an ocean of him. We said our goodbyes and we kept walking and found another patchwork tent dweller, a man missing a leg. We were starting to draw a crowd, and the fighter raised his Kalashnikov at the people who were asking for help. It was hard to breathe. The man said his name was Farid, and that he was originally from Kunduz.

"How did you lose your leg?"

"I lost it at the Kabul airport during the American bombing. I'm a tailor, and now I can't work."

Farid was selling off his family's possessions to buy food, because he had no other money. A few steps away and down another tent row an older woman named Bibi Jan came out to talk to me. She said that some new tents had come in, but that they had been distributed unfairly, with all new tents going to the members of one family. We hit it off; she had magnetic eyes so I asked her if I could take her picture and she said, "Why not." After the picture, other refugees admonished her for letting her picture be taken.

That was it, I had to get out of there. The fucked-up feeling was coming over me like a hideous wave.

Where, I wanted to know as we hiked back to the car, was the glorious UNHCR? Aman didn't know. The security guard said, "They are not here." This was a refugee camp, and the UNHCR was in the refugee business, and this was definitely a refugee crisis, so where were they? Looking around at the buildings and the steel signs planted in the road, I saw the names of some Arabic charities, an Austrian charity, but the relief effort looked as haphazard as the tents themselves. Charities and relief agencies in Afghanistan advertise their efforts by planting signs by the road, but there was no distinctive blue U.N. sign to be seen.

So we went to Jalalabad, after waiting in a traffic jam caused by a mine sweeper, and found the UNHCR offices. I asked to speak to the director. We were ushered into a dark office, with walls covered by acronym-bearing signs, to meet with Hassan Mohamoud, field officer for the UNHCR. He was very nervous when Sar Shahi was mentioned, like hed been caught doing something naughty. "Sar Shahi has a very long history," he began and went on to say that first off, the UNHCR isn't really supposed to do anything about Sar Shahi because they aren't refugees.

"They are IDPs, internally displaced persons, and the U.N. doesn't want to interfere with their right to seek asylum in another country. Technically we are not supposed to do anything. The U.N. has a clear policy about it. Also, the U.N. does not want to encourage the formation of border camps, which is what it is."

"You can't help them until they cross into Pakistan? The border is closed to refugees, and Pakistan doesn't want them." I was trying to understand what the deal was and failing miserably. Refugee assistance is very difficult, but it seemed that there should be a solid reason why the U.N. had completely abandoned Sar Shahi. "Many of the people in the camp have political problems from the war and they are afraid of the current government," Mohamoud said. This was definitely true, but it didn't seem like a good reason to keep out of the assistance business. We talked about a few more aspects of the situation, especially the medical condition of the people there. They were sick from the cold and an inadequate diet, it was obvious to everyone. "Nobody is starving at Sar Shahi; sometimes the refugees exaggerate." I gave him that one, but in his next statement he lost my sympathy.

"Sar Shahi is actually closed. It is 10 years old and it has been closed since 1997. The U.N. has no responsibility for it." Right. This was tantamount to saying that it wasn't there despite the obvious fact that thousands of people lived in it. Field Officer Mohamoud was so nervous, I wanted to make him feel more at ease but couldn't think of a way to do it. At one point he called in his director of policy, a woman named Monica, who pointed out the difficulties in distributing aid in a country where there is no government. That is certainly true, but the camp is a reality and it seems criminal to leave it alone in the middle of winter.

"You know that the residents of Sar Shahi destroyed their new water tank," Monica told me. That made so little sense to me, that someone from the outside must have done the deed. When I told her that it didn't add up she said, "No, it was definitely someone inside the camp. They did it to get the attention of the U.N." When I left, she wouldnt tell me her last name.

Those misbehaving war refugees, let them shiver and cough.