Relics of the lost bulletin-board tribes

Text files preserve some of the vivacity of old-fashioned online conversation. Will Web-based discussions vanish from the historical record? 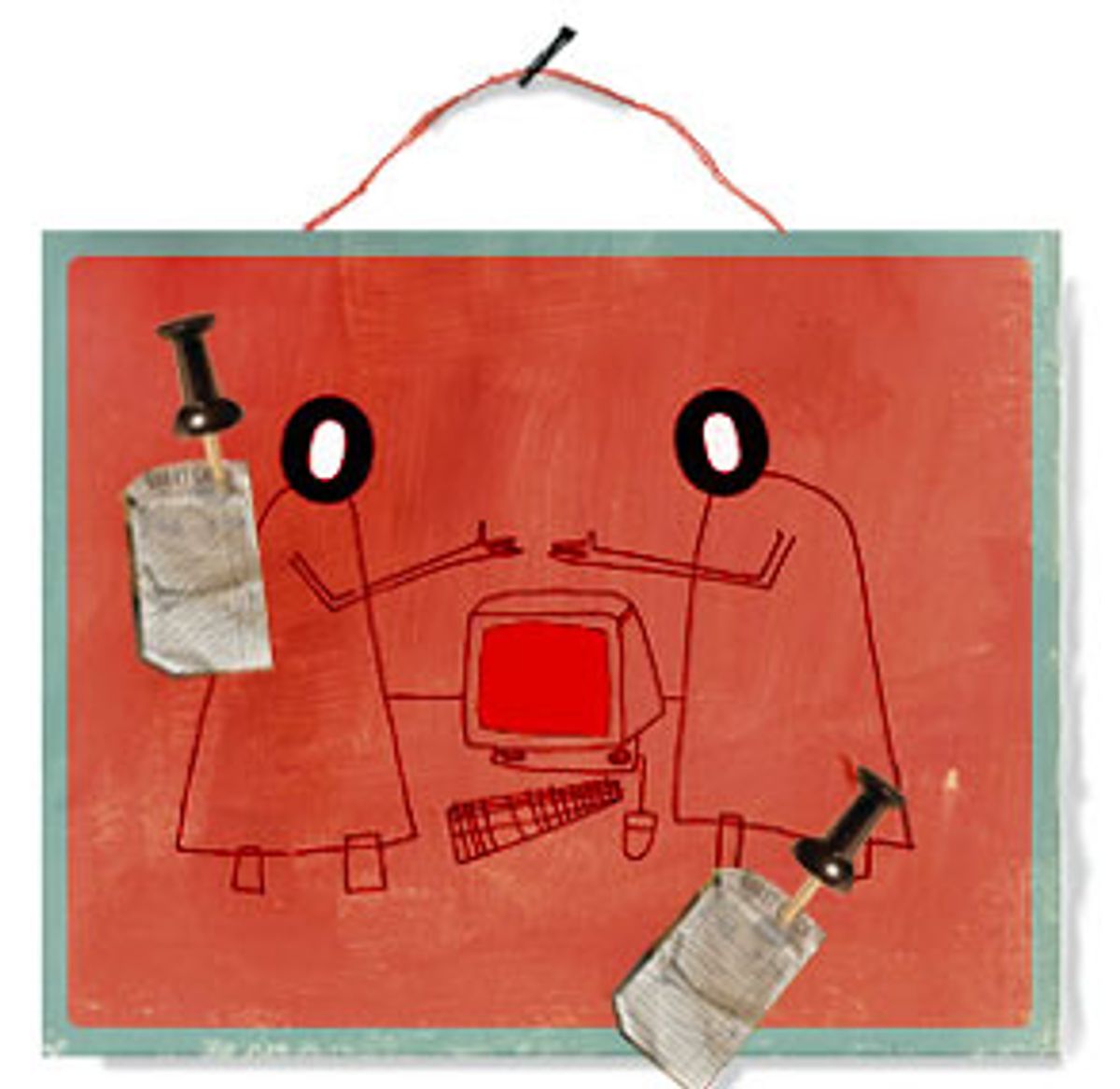 For digital preservationists bent on rescuing relics of early online culture, the holy grail isn't an e-Rosetta Stone or some Web Pharaoh's tomb. It's a simple ASCII text file like this one, which offers practical advice on handling an encounter with a UFO.

"Do not stand under a hovering UFO at low altitude. There is a possibility of radiation danger," counsels the undated document, "The Following are Common Sense Warnings for Dealing with a UFO."

The file is just one of the 43,000 pieces of digital ephemera captured on textfiles.com, one of the Web's largest repositories of artifacts of early bulletin-board culture. Other useful treasures preserved on the site: "How to Get Really Soaring High on Gatorade" and "How to Become an Unsuccessful, Burned-Out SysOp."

In December 2001, when Google posted the archives of Usenet dating back to 1981, the recovery of the old postings touched off a misty-eyed nostalgia-fest about what it was like to be online way back in the day. But to grizzled geeks like Jason Scott, 31, who got online at age 11, Usenet wasn't the only way to get connected back in the early '80s.

While Usenet was populated by professional computer scientists and systems administrators at businesses and universities, freewheeling dial-up bulletin boards, or BBSes, were open to every yahoo with a modem. "Usenet was the intelligent place," says Scott, giving his online handle, not his real name. "You stepped into it like a fine restaurant. BBSs were the fast food. They were marketed to anybody who could afford a modem. There was a different feel to them," says Scott, who started a BBS called the Works in Chappaqua, N.Y., when he was 17.

Today, Scott is an Internet archivist of BBS culture: He maintains textfiles.com, which attempts to capture the tens of thousands of files on every imaginable subject that BBS denizens passed around to each other over the past couple of decades.

"There's an enormous amount lost, but there is an interesting amount saved. A lot of these files came from the mulch of the '70s," says Scott, who currently has another 103,000 text files in his in box sent in by old BBS-hands waiting to be sorted and added to the site. He also maintains a canonical list of some 96,000 BBSs with names like Electronic Toilet and Cyclops Realm. The list includes the years the bulletin boards existed and even the phone numbers dialed to access them. Scott's next project: a monster documentary film about BBS culture, for which he's lined up some 200 interviews in 20 states and four Canadian provinces beginning this year.

As obsessive as Scott's one-man-band historical preservation efforts are, he can't bring back everything from those tens of thousands of bulletin boards that are no longer online. The early bulletin boards were essentially separate dial-up islands, which eventually became able to share files through a system called FidoNet. The preservation of this slice of digital culture depends on whether tens of thousands of one-time BBS operators happened to keep backups, and whether those old-timers can be bothered to contribute them to an archive.

The millions of postings on Usenet were harder to lose because there were simply more copies: Its technical structure demanded that Usenet propagate files across many servers around the Net, so today, approximately 95 percent of all the messages ever posted on Usenet survive on the Web in the Google archive. BBSs, by contrast, were discrete systems; though individual files might have made the rounds from one BBS to another, each one's contents was essentially unique.

The loss of all that BBS talk and file-swapping should be a lesson to anyone wondering what will happen to all the digital files and conversations that are taking place today on the Web. Because the Web's repositories for discussion have more in common with the old BBSs than they do with Usenet. For that reason, it's unlikely we'll ever have an archive of today's Web conversation to rival the celebrated one of the Google Usenet archive.

Paradoxically, it's the Web's very reliability that makes it hard to preserve. "Web logs specifically run on one server, so there's only one copy," explains Brewster Kahle, the Net's best-known archivist, who is trying to capture and preserve the Web as part of his nonprofit Internet Archive.

"In the old Usenet days, you couldn't count on the network, so there were hundreds of copies," says Kahle. "But the Web was built for a network that was reliable. Having one copy is the wrong answer. This is not going in the right direction."

Collin Ong, 30, a Sacramento, Calif., computer scientist, is one of the many Usenet habitués who migrated to Web-based forums in the late '90s, when the booming online population overran Usenet with spam and newbies. Even so, he's troubled by the future implications of evolution from Usenet to the Web: "With forums, each message is pretty much trapped on those sites. I haven't seen any Web forums where messages propagate to other sites. Think of all that's being lost in Web forums that aren't being archived -- and there is no clear, systematic way to do so."

Dan Eicher, 35, knows the unique frustrations of losing precious virtual conversations -- information that still exists somewhere but can't be accessed. As a hobby, the Indianapolis systems engineer takes an interest in the old TI-994A computer. For more than a decade, the online service Delphi maintained a forum where several hundred aficionados of the old machines talked about their nerdling obsession and exchanged software for it. But in 1998, Delphi, which was migrating to Web-based forums, canceled the host's contract and shut down the TI-994A discussion area.

Eicher and other forum members tried to obtain the old posts from Delphi, but even appealing to the top didn't work. "The bigwigs decided it's not worth their time. So, it's dead. It probably lives on the tapes somewhere, but access to it is nonexistent," says Eicher. Sharing information about an obsolete computer, generated by the users who still love it -- isn't this exactly what all this online culture was supposed to be all about?

Luckily, vigilant forum members saved the software and support documents from the Delphi TI-994A forum, but the users' posts still haven't made it back into circulation. Jerry L. Coffey, 59, a retired mathematical statistician in the Washington, D.C., area who hosted the late forum, says that he has backups of the posts. But even in retirement he hasn't gotten around to going through the 100 megabytes of messages to sort the public messages from the private ones.

"What's been lost is the active message base. It's still around. It's just not in a format that people can get at," says Coffey. "Several people have approached me to try to put it together, and I just haven't found the time. It's just such a chore."

The sorry fate of the TI-994A posts on Delphi is a perfect illustration of the archivist's "too few copies" nightmare. The Internet Archive has tried to solve this problem by simply making another copy -- of everything. The Archive does periodic sweeps of the whole Web, taking snapshots of everything that's there. At last count, it had gathered 100 terabytes of data -- about 100 trillion bytes. But this work, while massive, is Sisyphean, in that the Archives just can't get every page -- there's too much. And Web forum postings, in particular, are often generated by dynamic database queries that frustrate the Internet Archive's page-gathering, anyway.

The nonprofit archive has asked the commercial search engines to join the effort by pledging to donate all the files they collect to the Internet Archive. But so far, the only company that's done so is the niche player Alexa Internet, a company founded by Kahle, which was later purchased by Amazon.com.

"All these companies think they're immortal," says Kahle. "It's hard to say to people: 'At some point your company is going to be in the hands of a bunch of lawyers.' "

Who at Google wants to think now about what will happen to those Usenet archives if in five -- or 10, or 50 -- years, their company goes belly up? Ironically, it's hard to get technology executives to think about the future -- the future in preservationist's terms, that is.