Since the Taliban fell, weddings are a time to sing and drink and party. But some things haven't changed: Nadar didn't meet his bride until their wedding day. 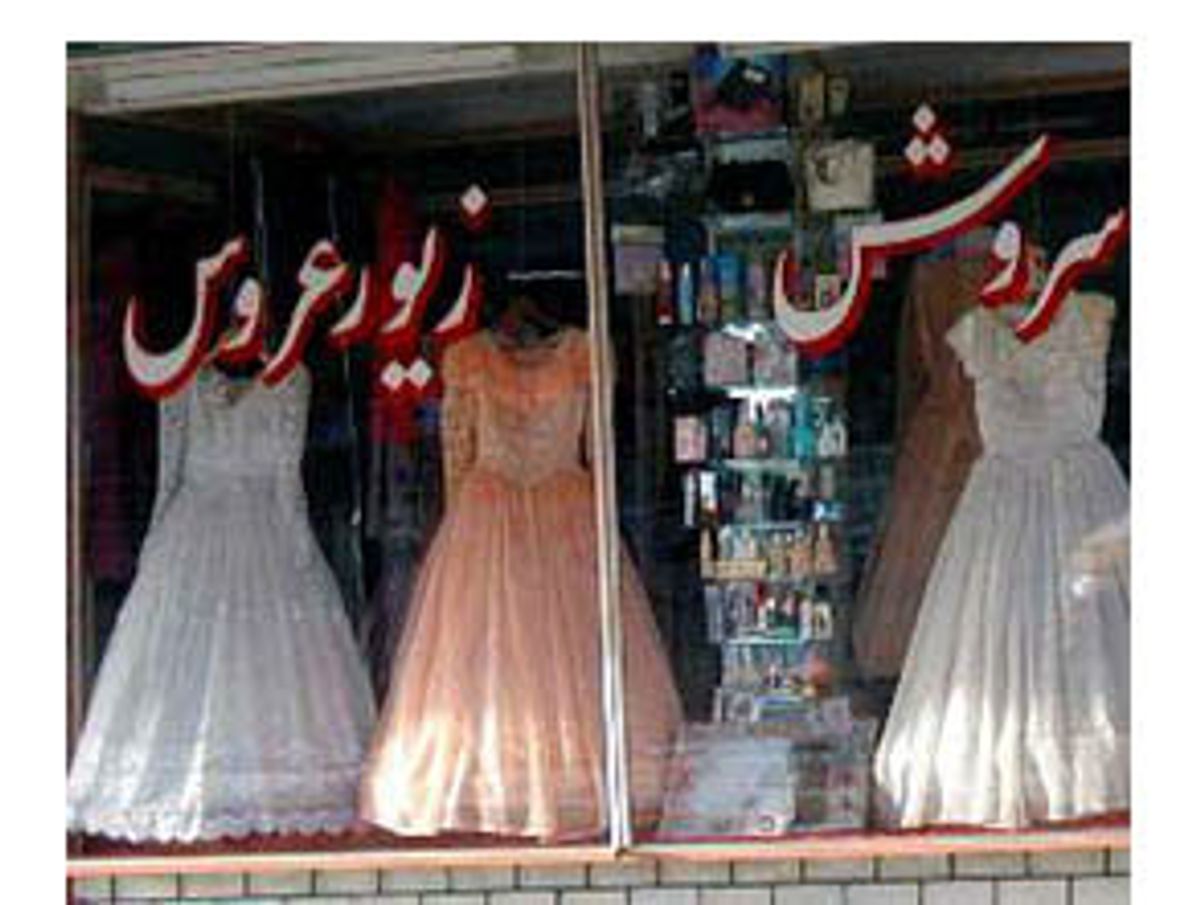 Here comes Lal Aga at a hundred miles an hour. It's cold out but he doesn't feel it. The men of Jalalabad are wearing their woolen shawls wrapped up to their chins, but he doesn't need one because he's too fast, he is 8 years old. The poor girl who is always begging alms at the bazaar pulls on his sleeve, but he's in a hurry to meet his father. The bazaar is his, he knows it, the motion as well as the labyrinth of sellers, the money changers and their neat piles of notes under glass, the hardware men with their hammers and anvils. Lal Aga runs through them one by one; they are blur, sound and smoke.

In Pashto, Lal Aga is a chagart, a bazaari's son. His job is to run errands for his father all day without stopping, taking messages, bringing tea, ferrying measurements to the tailors across the street, picking up finished clothes and collecting money. Lal Aga is a green-eyed telegraph wire.

When he gets to his father's store he is told to bring tea for the guests.

Hajji Mohammed Jan, Lal Aga's father, has worked in the bazaar on Dand a Gara Street for the last 10 years, selling cloth from China and Pakistan. Mostly silks, velvet and cotton. He doesn't sell finished articles, just the raw material. If someone wants a dress made, they have their measurements taken in the store; they buy the cloth from him, and then he sends Lal Aga to take it across the street for a few rupees. They usually have the work finished the next day. The tailors do business on the second floor of the market, open to the air, and he can tell which order they are working on without asking them, since their place is directly across from his.

Hajji Mohammed Jan's shop is a 10-foot by 20-foot box whose short side opens to the street. There aren't any windows because there are shops on each side. But his place is comfortable, has carpets, a pillow for relaxing and a wooden money box which he doesn't lock all the time. When he feels like it, he'll ask the customers to stay for tea and a chat. From the street, the store is a mosaic of colors because Hajji Mohammed has covered the walls with his samples.

Aman, my friend and translator, took me to Hajji Mohmamed's to get some new clothes for our friend Nadar's wedding. Nadar was the proud owner of the decrepit Land Cruiser we used for moving around the country. The next night there was a going to be a big celebration at Nadar's family's place on the edge of the city. Hajji Mohammed pulled bolts of cloth from the shelves, rolling them out on the floor for our inspection. We tested the fabric with our fingers, held it up to the light.

Salwars are loose pants, like pajama bottoms, tied with a cord, and the kameez is a long shirt that fits over them, with a flap in the front and rear. Afghan men also wear a waskat over the kameez, which looks exactly like a suit vest, but has been altered to have a large number of inside secret pockets for cash, or the odd contraband item. The final piece of the national dress, and the most easily recognizable, is a woolen shawl that is thrown over the left shoulder after wrapping around the chest.

Hajji Mohammed's older son took the measurements for the salwar and kameez, calculated the size and handed the slip to Aman.

Everyone at Hajji Mohammad's thought it was remarkable. Lal Aga took off with the fabric, saying it would be ready at 9 the next morning.

In the early evening, we drove out to the wedding feast on the outskirts of Jalalabad, parked the car and walked down a dark alley into a cloud of hashish smoke. Nadar's place was at the end of the street. Afghan drivers are wicked stoners, and tonight Nadar's friends and relatives were having a final blow out before his wedding the next day. We spent the night in a guest room, leaning on pillows, drinking a bottle of single malt scotch I brought from London. Every so often, one of Nadar's family members would come into the room with a crafty look on his face, take a quick look at our glasses, and then ask for a snort. Most of them were baked out of their skulls on fragrant black hashish to begin with.

One of Nadar's relatives, when trying to take a souvenir photo, keeled over in mid-shot.

"What would the Taliban have done if they caught you drinking whiskey?" I asked Nadar. He drew a finger across his throat, meaning the drinker's contract would be permanently canceled. They laughed. Jalalabad had been under Taliban control for five years, and everyone at Nadar's wedding was so happy to be rid of them, they went off the deep end, making up for lost time. Celebrations like this had been taking place all over the city for two months. We talked with Tor Mohammed, Javid and Farhad, Nadar's brothers. Tor Mohammed is a motorcycle mechanic in his late 20s; Javid and Farhad are much younger.

During the joyless period of Taliban rule, they said, weddings had been reduced to solemn affairs presided over by the local mullah. Nadar's family had something different in mind to celebrate this marriage.

"Why?" I was happy to stay there for days.

Aman explained our predicament, inadequately. "Because we don't have the name of night."

"The name of night. If we go out past a certain hour, and the police stop us, they will ask us for the name of night, and if we don't know it, there are big problems. Maybe they take us somewhere."

It was a password, issued by Hajji Kadir's people at the governor's mansion, but they weren't going to give it out to the likes of us.

We left Nadar's and promised to come back the next day at 10:30 for the ceremony. The mission for the next morning was to find all of the ritual gifts for Nadar, before things got started at his house.

At Hajji Mohammed's we picked up the new clothes, found Lal Aga, and headed out in search of the gifts. Lal Aga's job was to find the quickest route to the shops, and keep the foreigner -- me -- from drifting off into an endless sea of bargaining Afghans.

First, a box of sweets. We couldn't show up without the box of sweets, that would be rude. There was a corner sweet shop, and that was that. Our next stop was a wedding store, which sold bright crepe, plastic streamers, sparkles and another item, called an amel. An amel is a large piece of cardboard, with a strap so that it can be hung around the groom's neck. The cardboard is covered with carefully folded afghani notes or Pakistani rupees, all arranged to look super festive. Now, in the center of all this madness is a working plastic clock. Some amels do not have the clock, but they are cheap, and considered unfestive. The best amels come with the mysterious clock in the center of all the stapled money, which radiates outward from it like a Terry Gilliam sun. We dutifully bought one that told time, put it in the Land Cruiser and went off in search of the real gift, a watch.

After much trudging around and being told the most outrageous lies by Jalalabad watch merchants, we found Nadar a gaudy Seiko 5 that Aman swore he would love. Then, a quick change into Afghan finery and on to the wedding.

At Nadar's, the entire neighborhood was tuned in to the event. This time, we went deeper into the house, past the room reserved for guests, into Tor Mohammad's bedroom, which sported a picture of the famous Persian singer Nagmah, and a couple of motorcycle calendars. The men filed in and asked me if I felt normal. I said that yes, I had a pretty normal feeling. Tor Mohammed wanted to make sure that I knew that he felt normal after all the drinking of last night.

We felt OK, but Nadar looked dazed. He's a handsome guy, 25 years old, soft-spoken and a very sweet man, but he was getting a little green around the gills as his moment approached. His moment, really a monster roll of the dice in the love department, would arrive at midnight when he would see his wife for the first time, talk to her for the first time. There is, of course, very little chance of backing out of the deal. It goes without saying the same is true for her, but because women are separate in Afghanistan, there was no way to find out how she was feeling. Even her name was a secret. Nadar had never even exchanged a note with her. She could be as young as 13.

Nadar's uncle was standing in for his father. Nadar's father, a mujahid, had died fighting the Russians, and it was his uncle who had arranged the match. In Afghanistan, it's common for a father to arrange the marriage of his child with the child of a very close friend.

The women were singing in a tent in the garden of Nadar's house and the children were singing and dancing, but they were hidden except for their voices. The songs were Persian, and every so often a Pashto song would come out of the tent. It's a language that has a much different rhythm, rougher than the rolling sounds of Farsi. The Pashto sounds were visceral. A turbaned mullah, sitting on a concrete platform, took the scene in and seemed satisfied.

At 2 in the afternoon, Nadar went into his guest room and came out wearing his new clothes, a white salwar kameez and a green waskat. He looked so close to fainting, I wanted him to sit down. Then the crowd took him across the street to the garden where he would be married and led him to a red velvet chair. Nadar stood while all the men came one by one bearing their amels, and put them around his neck. When the bundle became too heavy, a friend would lift off the entire bunch and the process would start over. Nadar teetered under their weight.

Every so often, well-wishers threw small amounts of rupees before the groom while the neighborhood kids darted out and nabbed them. When the kids got unruly and crossed in front of Nadar, the older men would hit them with sticks, making them scatter. Shakil Ahmed, a doctor, played the armuna, a kind of accordion, while his friend Manawar accompanied him on the tablas, best but inadequately described as a drum set. As Shakil Ahmed sang, the men danced in a circle around Nadar, slowly gaining speed. When they were done, Nadar's family piled into a convoy of decorated cars and drove to the bride's house, to bring her back to the wedding. The neighborhood kids ran after them.

It was time for people outside Nadar's family to go home. I left, reluctantly.

Two days later, when Nadar stopped by the hotel, he was overjoyed. "How is she?" I asked him.