For me, one tragedy exploded another. 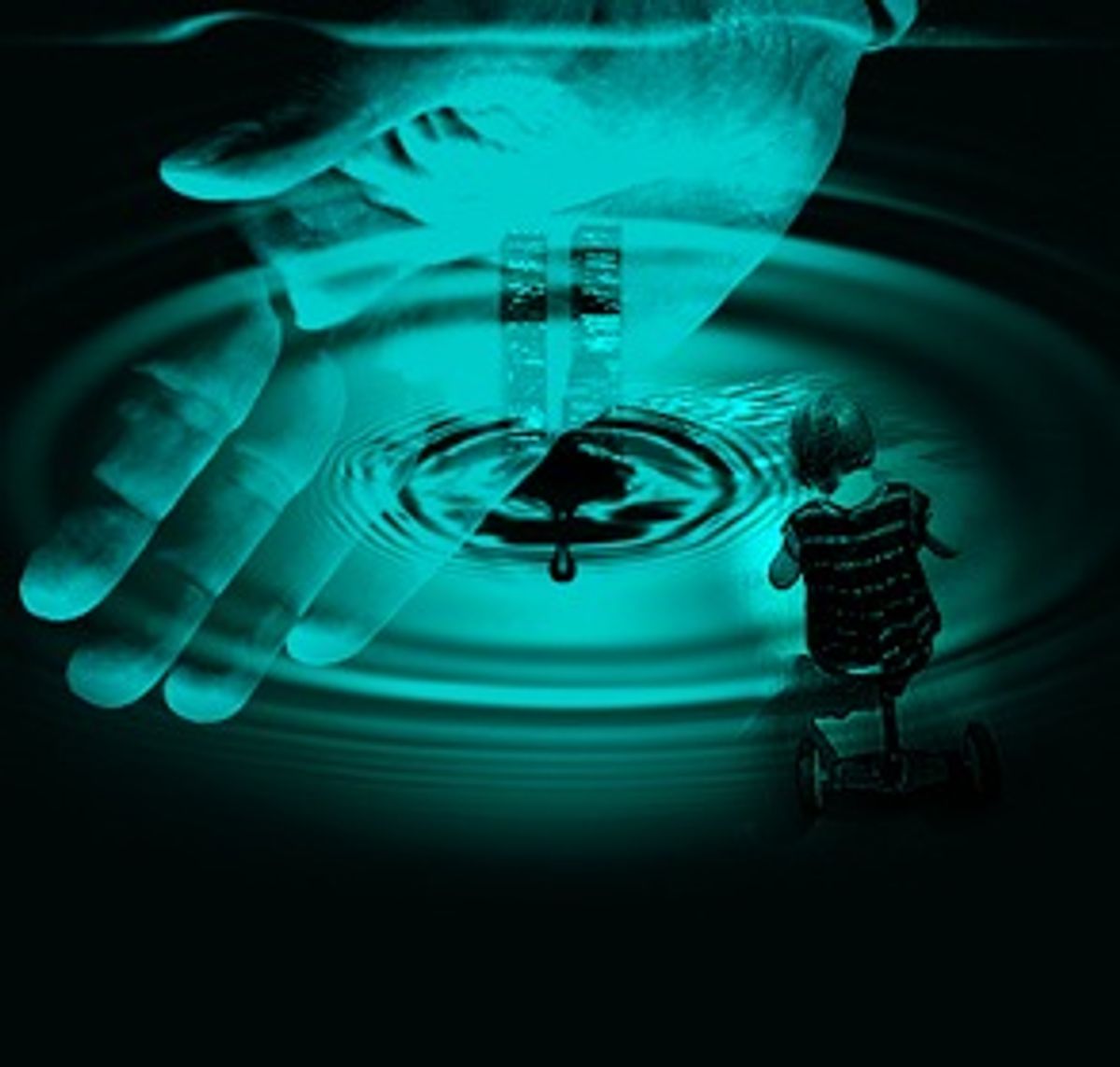 I hear about relapses and flashbacks in the aftermath of Sept. 11: Crane operators who were in Vietnam confuse the ground zero dead with Da Nang dead; Holocaust survivors experience long-buried Gestapo nightmares. The present-tense tragedy becomes a heat-seeking missile, detonating the bunkered past. This is something I understand.

For me, the shock of 9/11 exploded a personal target, a deadly mine planted when I was small: My father did what no father should do, while my mother, herself an incest survivor living behind concrete denial, was unable to come to my aid. And the landmarks of my childhood skyline fell, leaving a numbed disassociation that would take decades of work to dispel. Even after I remembered and began to accept the incest as part me, this habit of disassociating from the present remained. It was a whirlpool in whose outer eddies I lived, sometimes floating, sometimes paddling frantically. Seeing the towers burn and fall, I went under fast. Since then, I've left my home and my partner of five years, abandoned a novel-in-progress and lost my sense of well-being.

Why did so public a catastrophe cause so private a relapse? Most people know at least one person who can answer that. In a child's tiny, tender world, abuse by a loved one is an immensity. Since that time, nothing as immense had happened in my world -- until Sept. 11.

I hadn't expected to be in New York that day. Less than a week before the 11th, a former professor called me in Philadelphia asking if I could come to Brooklyn to lead a week-long writing workshop at a new public school, an early college that allowed high schoolers to do advanced work while remaining within the New York City school district. Enthused, and improbably available, I said yes.

The school, a brainchild of Bard College, was housed on the fourth floor of a junior high in the Greenpoint section of Brooklyn. I was originally assigned a small seminar room that looked out on the Brooklyn-Queens Expressway, but on the first morning of workshop there was a mix-up and I found myself in a large classroom, its wall of windows facing the seemingly indelible skyline of Midtown and Lower Manhattan. It was a view to e-mail home about. The students, too, were spectacular: as diverse as New York, as gutsy. I loved hearing their Polish, Russian, Caribbean, African-American, Latino, Middle Eastern and New York accents. At the end of the day they'd unfurl huge subway maps and huddle comparing routes. Some had one-way commutes of as much as two hours. Even if our few days together hadn't been marked by the unforgettable, I would always remember their open faces and eager minds. The things they could do, the places they could go with a short Sharon Olds poem!

On the Monday that will always be "the Monday before the Tuesday," we read Robert Pinsky's poem, "The Shirt." The poem includes a description of New York's famous 1911 Triangle Factory fire, in which 146 sweatshop workers died behind blocked exits. It tells of an anonymous witness watching a man in the fiery window of an upper floor help one woman after another step off into mid-air "as if he were helping them up into a streetcar, and not eternity." Why, a student asked, hadn't the witness done something? The witness had done a great deal, I said, by witnessing.

Why, at certain moments, faced with certain sights, do we open our mouths only to clamp our hands over them? To keep the screams in, the horror out? When I came in Tuesday morning, the first tower was on fire. Most of my students saw the second plane coming; we all saw what followed. There wouldn't be much writing that day. We would simply try to keep the students safe until parents could make it to the school.

That afternoon, as stunned thousands streamed off Manhattan, three of us staying in a West Side apartment building tried to get back into the city. Navigating the erratic subways kept me focused, but once out on the smoky streets I went slack, a failing balloon lost to the current. My mind wandered off into the shelter of fantasy, much as it had when I was a child. I wanted to invade a bakery, hunker down at a bar, fall into obsessive sexual love, affix myself to a television -- anything to duck the elementally unacceptable present.

As I watched images of destruction and mass death all the rest of that day, the progress of 15 or so years counseling, journaling, meditation, body work, dream work, energy work and prayer seemed to collapse around me. The whirlpool had become a waterfall, and I was over the side before I even noticed I was wet. I felt the old, self-destructive hopelessness -- the victim demonstrating buried hurt by hurting herself, wrecking her life, indulging irresponsible despair. I wonder now if the 19 hijackers were goaded by a similar hopelessness. I know my inner victim was smugly happy to have corroboration.

On Sept. 13, we returned to finish the workshop, but it wasnt the same. Students were eager for regular classes to begin. I, on the other hand, felt eager for nothing but rest -- the one thing that wouldnt come. Instead of hurrying home after the workshop into the arms of a peaceful person who loved me, I rode the hobbled transit system out to an aunts house in Queens. More television, then off to a second-cousins birthday party. Then my sisters busy house, then the writing retreat Id rented for the summer. I could neither retreat nor write though so I found something cheaper, farther into the woods, and moved. And when my lover came for a visit, she left soon after, the ring I had given her a lonely zero on the table.

Does every relapse have its silver lining? Our national disaster evoked my private one but also, like the lights flooding ground zero, illuminated it: I know the child I once was as never before. And I am reminded that the soul is a tender sheath that ought never to be pierced by violence. Like the unnamed person in the Pinsky poem, I have seen the human personality leap from reality as if reality was a building on fire and I have asked: What could prevent this? What, lacking prevention, would heal it?

The strange thing about whirlpools is that after the maelstrom and the sick sinking there's the stillness at the bottom. In the stillness I have heard an answer and the answer is love. When I read the scant reports of casualties -- in a Tora Bora village hit by two stray bombs, one landing where the men had gathered to listen to radio (and die), the other on a hut, the mother killed and three of the four children left unconscious -- I orbit for a while in the solar systems of the new victims. There will be decades, maybe lifetimes of inner upheaval.

To those who say that peace can better be brought about by bombs and Marines, I ask whose peace, and what kind of peace? Peace between nations and peace of mind, or to be left in peace while we spin like dirty laundry in our various whirlpools? My relapse has taught me that the peace of disassociation isnt the kind of peace I want. Those who died on Sept. 11 will not have died in vain, I've concluded, if our hearts are opened to our own suffering and then to the world's, and if our minds can finally concede the connection.

Since September, many with a history of trauma have been driven out onto the window ledge. Instead of jumping, though, maybe we can return to our personal rubble piles, keep digging, look up now and then to revere the sun, the stars, young minds and what remains yet of the amazing view. Then we may find the unguarded children we once were and salvage the souls that know: Every life is a light, every form of attack is terrible.

For some female incest survivors, the pain of childbirth releases locked memories, as if the body has been waiting all along to tattle. These months since the airliners pierced the sides of the towers have been a painful labor for me. What new life might yet come forth, Im not sure. Im writing again, but not what I was writing before. As for loving, I wait to learn more from the current stillness about what form love might take.

Kathryn Gordon is trying to get back to a pre-9/11 novel, "Real Moon," and working on a memoir of innercity living, "Welfare As We Know It." She's currently living in the Endless Mountains region of Pennsylvania.