I went to visit an Afghan opium bazaar -- but they wouldn't open their stalls until I returned with the police. 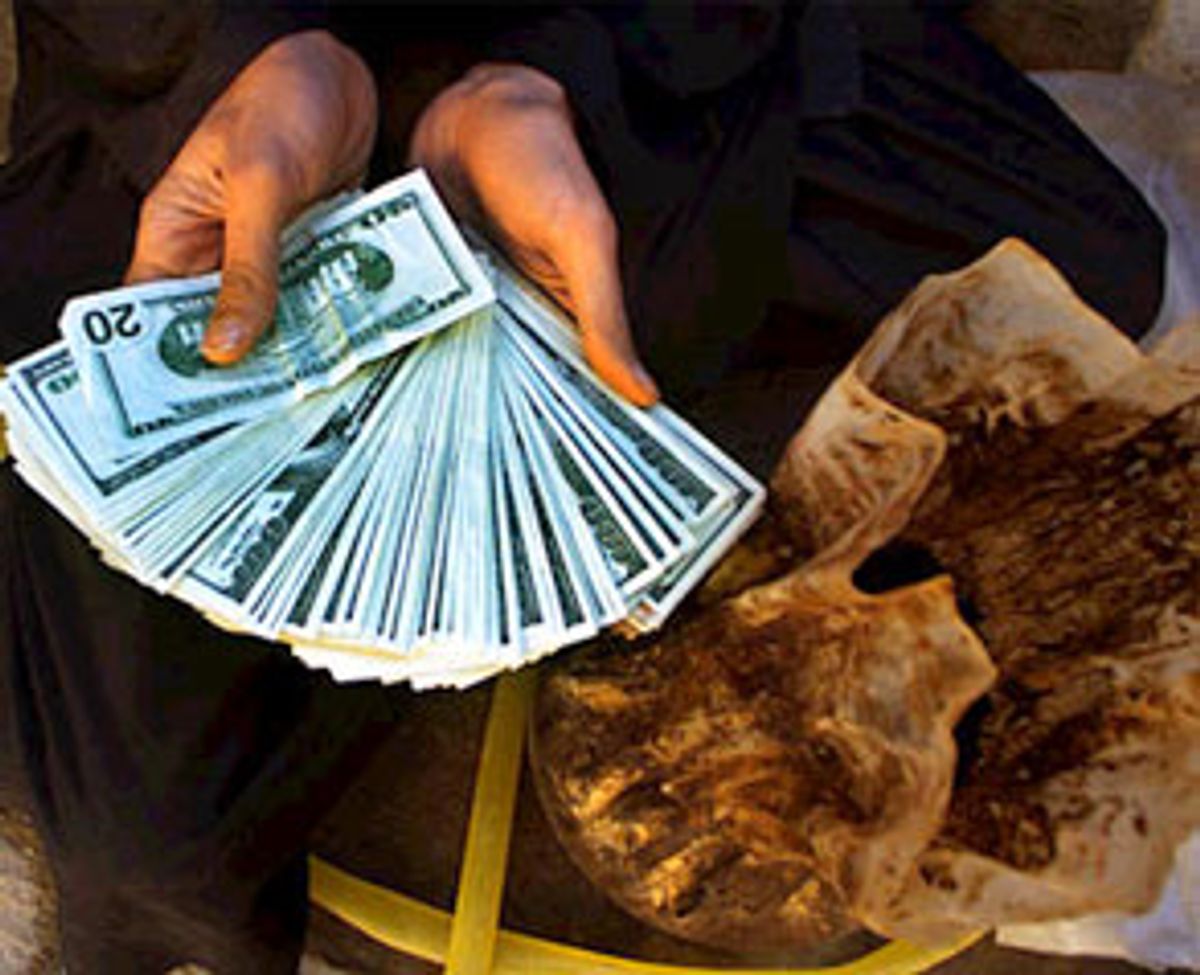 In my hand is a small piece of opium resin, fresh from the market in a village in a nearby province. It is black, smells like dirt and is about the size of Tic Tac. At most, this fragment weighs about a tenth of a gram, not enough to be missed by the vendor who unwittingly provided it from a plastic 10-kilo bag. This tiny sample would have made it all the way to Pakistan, most likely crossing the Torkham border by truck, if we hadn't rerouted it. Aman, as a joke, stuck it to the glass of our Land Cruiser window, so opium rode back into Jalalabad with a view. Then I got nervous that we would get busted and mashed it between the pages of my notebook. On Jan. 16, the Hamid Karzai government issued an order banning the sale and production of opium, but the growers have yet to hear of it.

Getting there was easy. A friend knew where the market was and so we woke up early, knocked back some instant coffee and piled into the decrepit Land Cruiser that I'd hired more or less at bargain rates. The car worried me; it had a creepy accelerator problem that involved a length of wire that Qasim would pull every so often to keep the engine running. If we stopped longer than 15 minutes, Qasim would hop out and make an adjustment. The car is on its last legs. That's what the pair of vise grips between the driver and passenger seats means. A couple of days until it's on the side of the road, burning out of control.

It was 9 in the morning on Saturday, and since we couldn't wait to arrange reliable transport, we got in and went tear-assing down the road toward our village. Tear-assing is how Afghans drive. The best way to deal with it is to avoid looking out the window at the oncoming traffic. Usually this consists of a random mix of donkeys, motor rickshaws, passenger trucks, vegetable carts and pickups full of armed men. On Friday, I saw a Toyota Corolla going in the other direction carrying half a flock of sheep. They swayed and lurched, probably not really digging it, and the animals were packed so tightly, forming an übersheep, that the Afghans in my car said they couldn't figure out what life form was being hauled down the road.

When Aman got out at the Jalalabad city security checkpoint, writing our names down in the ledger, it crossed my mind that we had left the area directly under the control of the Hajii Kadir provincial government and moved into a more open situation. But it didn't feel tense, the sun was out and the fighters seemed relaxed and relatively efficient at checking each car for weapons and smuggled al-Qaida types. This is something of a miracle, and soon we had turned off the main road onto the rutted track and clouds of dust that mark the Afghan landscape. Another several hours of high-speed bouncing and careening and we came to a cluster of green, carefully irrigated fields and mud-brick walls.

A sign advertising the presence of the Muslim Youth sits right next to a bigger sign that reads, "The Use of Illicit Drugs is the Greatest Threat to Humanity." Somebody should annotate the sign to say, "Where can I score?" The opium market is 300 meters down the road, and operates six days week, completely out in the open. When we pulled into the village, we got out of the car and walked over to the first line of stores in the bazaar. It's a long, low building, each store occupying a wooden cell about 8 feet across and 15 feet deep. According to Afghan custom, the floor is carpeted and men sit on cushions, drinking tea, waiting for business. Opium sellers sit in their stores with little except a scale and a few plastic bags, but in this part of the market, other products are sold as well. Lamb, cookies, batteries, small knives: an Afghan Wal-Mart where each seller has a section of the entire store. Bazaaris make displays of their wares and call out to passersby to buy this or that, sometimes asking them in for tea.

When we walked over to the first dealer, he was so surprised to see us that he didn't have time to close the wooden slats and retreat to safer ground. Then, by way of introduction, Aman leaned down and opened the seller's plastic bag for inspection. The man with the stuff, a bearded old gentleman wearing a skullcap, was inclined to be gracious, so he just stood and watched me bend down to the sack and peer closely at a substantial part of Afghanistan's recent history. At first what seemed like a solid mass of melted Halloween candy soon became a cluster of disk-shaped biscuits that had fused together under their own weight. A sticky, oily aggregate. I explained to the seller through Aman that we weren't here to get anyone in trouble, just to have a look around. For obvious reasons, foreigners are not welcome in the opium market.

Aman led me around a corner, to an interior courtyard of stores and straight into a crowd of several hundred agitated men. They closed in, and so I gave them the same hardly believable explanation about not revealing the name of their village, that the visit wasn't going to be a bust-the-Afghans junket, etc. A mood shift was coming on. The market had closed so fast, it seemed that they must have practiced it in a drill. Fifty pairs of shutters slammed, and men of the stores were quickly joining their colleagues in the crowd. This made me want to split, since nobody was going to talk, and our presence was just making them angry and nervous. So, when Aman finally said, "It's time to go," we went in a hurry, back to the car waiting on the main street. Here it comes, I thought, one angry shopkeeper is going to pull out his rifle and let us have it.

On the way back to the car, Aman collared an old acquaintance and led him to the Land Cruiser and said that I could ask him questions about opium production. Hajji Mohammed, a gentle 50-year-old man, got in and explained how the biscuits were made by scraping the pods of opium poppies until the resin builds up on the edge of a knife. The resin is then collected on a plate and wrapped in leaves. As he talked, people gathered around the car, watching Hajji Mohammed give his interview through the windows. They saw the notebook. They saw him talking to a foreigner, and after a few long minutes, Hajji Mohammed said through Aman that he was scared of the other bazaaris. We were getting him in deep water. "Let's go talk to the police," Aman suggested. That seemed a little weird, but it seemed that we had to quickly put in a good word for Hajji Mohammed so that something bad wouldn't happen to him.

There is a police station just outside of town, and Qasim started the car, where halfway down the hill, it stalled. I imagined a crowd of angry opium sellers charging down the hill after us like an army of the undead, but of course it didn't happen, because they are not violent people. Qasim pulled on the wire, got the machine started again, and in a minute we were at the office of Hajji Abdul, the local magistrate.

"Who are you and what is your purpose for coming here?" Hajji Abdul wanted to know. I told him that we were just here for a visit, making the same assurances about keeping the name of the place a secret. I apologized for scaring the shopkeepers and asked for his help. Outside his office, bearded old men were engaged in a furious argument, and all of them were waiting for a chance to meet with the magistrate. Their shouts came through the window; every so often Hajji Abdul looked out to make sure they weren't killing each other.

Hajji Abdul wanted to explain the existence of the market, which operated in his jurisdiction with his tacit approval. "The market belongs to this area. The people are poor and have no jobs. They are doing this for money because there are no factories or places for them to work. If there were such places, they wouldn't grow it," Hajji Abdul said. I got the feeling that he felt a little ashamed of the business but felt that the people were more or less forced into the drug trade. "We allowed opium because the people only have a small amount of land, and if they grew food on it, they wouldn't have enough money to live." The BBC claimed that Karzai's opium ban "renewed an order issued by the Taliban authorities two years ago" which was "strictly enforced." But Hajji Abdul talked of how the real business of the Taliban was opium growing, and how they had gone before the United Nations and said they were against drugs, but in fact had gone to the sellers and told them to do a brisk business, taking 10 percent of their profits in the name of charity. We agreed that the Taliban were bad news.

Then a strange thing happened. Hajji Abdul offered to take us back to the market with his fighters, saying they would open it for us. It sounded like a bad plan but it had that weird momentum, and I was still very curious about the bazaar. In front of the police station, seven mujahedin piled into the back of a pickup and led our car through a break in the village wall, down a secret path. When we arrived, sellers were still milling around, looking intensely peeved. The stores were still shut. When the sellers got a look at the magistrate's men, everyone seemed to relax. The truth is that the local authorities protect the market, so anybody arriving with the cops gets the green light.

A seller opened his shop for me and I sat on his floor with him in the dark and asked him about business. Who were the buyers? "All of them are Pakistanis. They come peacefully, only taking what they need," the bazaari said. Once the biscuits are bought, they travel to Ali Masjid in Pakistan where they are then refined into heroin. "How is the product moved around so easily?" I wanted to know. "Big officers in the Pakistani intelligence services [ISI] are involved in the shipment of heroin to Europe and the United States," the seller explained. "ISI narcotics and the FIA are the big ones."

For every kilo of opium biscuits (in the market, a kilo is a generous 1,200 grams) the sellers get about $150. My new friend's 10 kilogram plastic bag of resin, worth about $1,500, a fortune in Afghanistan, will become one kilogram of pure heroin in Ali Masjid, worth a fortune anywhere. The Afghans can't give it up, and often it's the cash crop grown by doctors and engineers who haven't been paid for months.

"We don't have facilities to make heroin here," the seller pointed out, placing the blame for the drug problem in Pakistan's court. Heroin didn't seem like something he was eager to get into.

On our way up to the village we had seen convoys of trucks and cab from the Torkham border headed to the market, a steady flow of hundreds of buyers who will return to Pakistan the same day.