Cycling in hell and loving it

Forget hamstering at the gym: I choose the challenge of the Urban Death Match! 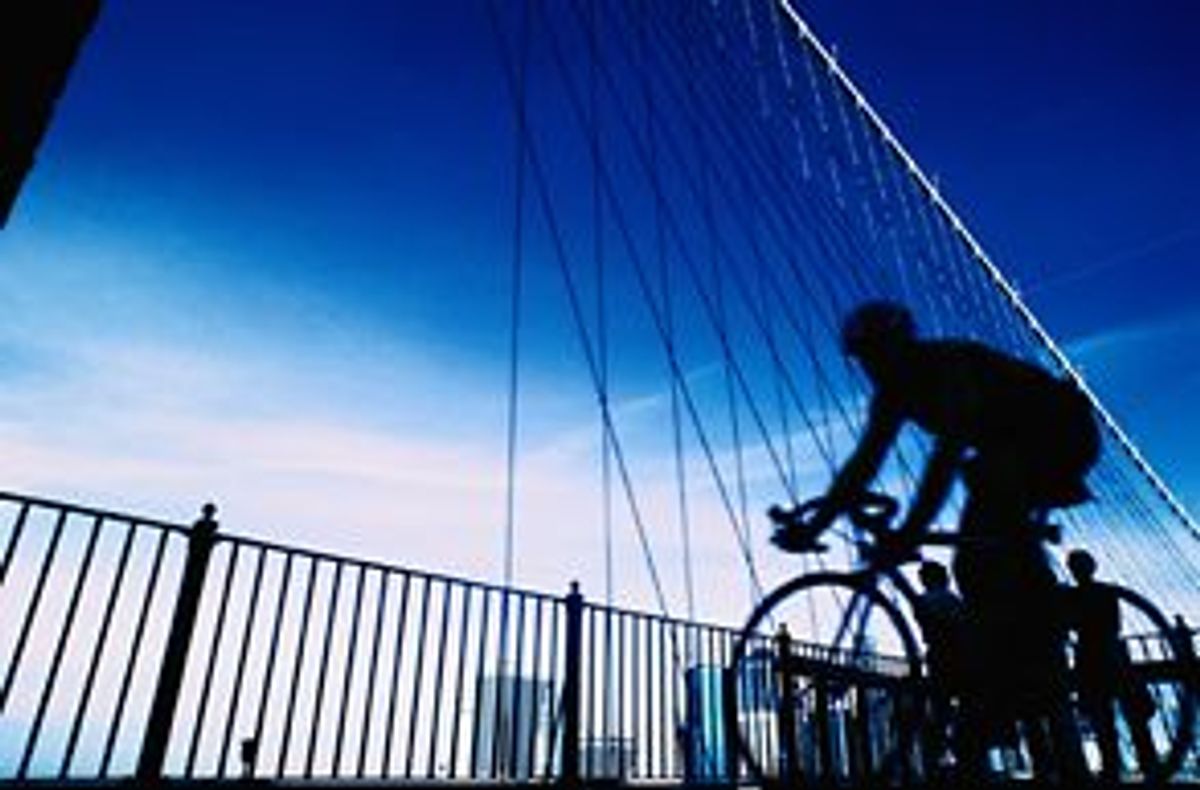 Waiting behind cars of other people waiting to get on highways, waiting to get in, to get out of the city, waiting at red and at green lights, too -- should be moving, more waiting, why? He doesn't know.

The guy in the Explorer next to me is getting angry, and at this point I imagine he'll soon be spraying the windshield with dung backed up into his throat. I wanted to help him, get out of my car and hold him, but he was yelling at the traffic and then singing to music and yelling some more; his music all beat and bass drum, meant for movement, getting laid, being heard, and that's why he's got his window open to the hot poison summer air. No air conditioning for him, he's big and proud, he guns the car a glorious 250 inches.

Unfortunately, our little New York jam on the Brooklyn Bridge has got him by the balls; no way out except over the side into the river; his whole manliness is in question. This is a national problem. There are places in this country where rush hour is starting to last all day.

Just then the bicycles come, and they are a relief to see: a gang of them, flooding, 10 of them, 20, hooting and obscene, heading back to Brooklyn, boys on BMXs and mountain bikes -- and they're riding not on the boardwalk with the walkers and the tourists like they're supposed to, but right down in the pit, on the tarmac, with the honking and the carbon monoxide. They ride no hands for three and four seconds between the fenders and trunks and hoods; they're like a school of fish passing many drowned hulks. I yell out the window in salute, and they say, "Awright, bitch!" And then they're gone.

It's an intolerable situation, the congestion that grows apace in our cities with no end in sight, the constant clinch and clench of people in each other's way -- not just on the roads, it's at turnstiles, in subways, elevators, in the stores, the bars, the restaurants, the life. It's madness, and produces madness: having the basic physical freedom of mobility constantly sniped at and frustrated. And yet somehow the vast majority of urban mankind learns to accept this dispensation in exhausted passivity, inured to the petty tyrannies of delay.

For those, however, who wish to live sanely in the city, for those who are becoming sick like our friend in the Explorer -- for those who feel that loss of mobility is tantamount to having one's gonads removed -- the question is how to bypass the swarm, and move: move fast, freely, spontaneously, voluntarily.

The answer, of course, is the bicycle, the only really stylish way to travel. It is a way out, too, for the millions of brain-damaged "professionals" in the tall cages of metropolis, the people who work too much and go to psychologists and physical trainers and buy SUVs for the sex, dunning themselves into debt -- a more or less simple and easy-access way out of the emasculating pallor of sitting behind a desk all day growing hips larger than one's shoulders. Take up the bike. Ride dangerously, like you did as a child.

There is no better place to do it, and die, or live proudly doing it, than New York City. If you have cycled in the hysterical warlike evacuations of a Manhattan rush hour, you have been initiated. The hum of the wheels, the click and whir of gears, the passage, the concentration, the fear of death, mutilation: attunement of senses -- they grow strong. Roll under arm of man hailing cab; hop the high curb; smack deep in a pothole, crackle through pebbled concrete; swerve, jump, lean, swing, run, race, bang bones, flap wings; sing at top of lungs "Look out, dummy!" to blithe pedestrian who thinks she's walking naked in her bedroom. Maybe fall once every few months, lose some skin on your arm, bleed in the rain or the snow (in piles of dirt ice that resemble the leavings of prehistoric beasts). You get to a speed where the cold wind catches one tiny drop off your arm, spreading your spoor. That sight, the wind sweeping up your blood, is delightful, it's grandiose, and from these high places, the rest of humanity -- imprisoned in their giant crawling bugs, huddling at bus stops in the rain -- seems almost a separate species, cursed somewhere along the helix, unable to evolve to meet the city head-on.

There are times when 60 blocks downtown through raging traffic is unbearable -- how many ways to bite it in those three miles? Let's take some examples:

Midday lunch tempests of young lean girls in summer will kill you. "Don't look at the girls" is the first advice the veteran cycle messengers give. The Summer of the Short Skirt will wrap you round a light pole.

Out of the dry-wall dungeons the lunch crowds are wild, and you must ride between them as fast as you can without harming a one. Some are inch-worming, some drunk on money and frantic, some are in wheelchairs, and between them there are two feet, three feet of space, the ratios of distance and velocity constantly changing. Any sudden motion can be disastrous, for you have calculated the approach and escape by exact footfalls, by the swing of briefcases. And you at 25 miles an hour could kill them and kill yourself. So you give a great banzai screech and cut it fantastically close to the big man in a jumpsuit, who howls, and you swoop past the woman with the stroller, who howls, and then it's 300 feet of street that's all yours.

No urban engineer will ever fix these Hell Gates where man and vehicle and commerce and hatred of all against all coalesce orgiastically, electrically. Buses on Fifth Avenue look like moving canyons, their howled brakes, their heat blows your hair aside, you skirt between them -- a slick of oil -- bike goes down, it happens that fast, and you're dead. This happened to a young messenger named Bradley Minch, who was crushed under 80,000 pounds of tractor trailer. Crimson places of the fallen: heads blown open and arms squashed and teeth in tatters and bowels evacuated. Since 1990, 201 cyclists have died on New York City streets. In '99, more than 4,000 cyclists collided with automobiles. Such is the bloody tyranny of the motor vehicle.

I nearly died in quiet Brooklyn, of all places, on a little street of homes, at an intersection with a red light; cyclists in New York don't like red lights, nor yellows, and this red, like any other, was an invitation: Try me. An old beast belching pulled short out of nowhere, I hit him, my fault, I flipped, I flew, a great slowness came over me, and warmth -- I was peeing myself.

But accidents, if they don't kill or permanently damage, can be superlative moments, outsize from the common condition; heroic. I remember cycling in the rain in Paris, along St. Germain-des-Pres, where the traffic trawls heavy off the quai highways; if the lights are timed right, the cars spread out and speed up marvelously on the half-mile to the crowds of Boulevard St. Michel. I was raging along with them, going to school at the Sorbonne, when a little Citroën truck swerved into my path, made a right turn up a side street. I braked, slid wildly on the rain-oil, shimmying, and time slowed, the bike went in a sideways skid, the truck loomed. I watched myself from afar: out of control: panicked: suddenly knowing and calm and here: I placed my feet on the top bar -- fucking look at that! -- and kicked the speeding doomed thing away, leaping in air toward the sidewalk and landing on my feet and rolling. The bike ricocheted off the side of the truck, the driver sped away and I sat on my ass, laughing and laughing.

How many times have you, cyclists of the city, laughed thus, triumphal in the simplicity of your speed? A cackling often mistaken for courage; it's really a death wish and also a thumb, imprudent, in death's eye. It's a sex addiction, possibly morbid. But you have just crossed the gauntlet. What is it men seek on the tops of the K2s and the Kilimanjaros, in the crosshairs of the storms at sea, in the white waters of the Colorados? The legend of self, proof of life when you look back alone at what you did and didn't do and where you stood away and where you spoke up; healthy self-esteem; love of battle. Filthy miniaturized minutes of the office, eat this! I'm offering a new one-step plan: enough hairlessness, enough hamstering at the gym, enough men's magazines: Choose rather the challenge of the Urban Death Match.

It can be had, cheap, any Monday through Friday between 8 a.m. and 8 p.m., in any major city that is dying from congestion, anywhere across the hundred-thousand avenues where the foul flow breaks and feeds and rakes itself across your heart -- and you eat it for breakfast.