As both the House and Senate start their multiple queries into the collapse of Enron, the lead auditor takes the Fifth. 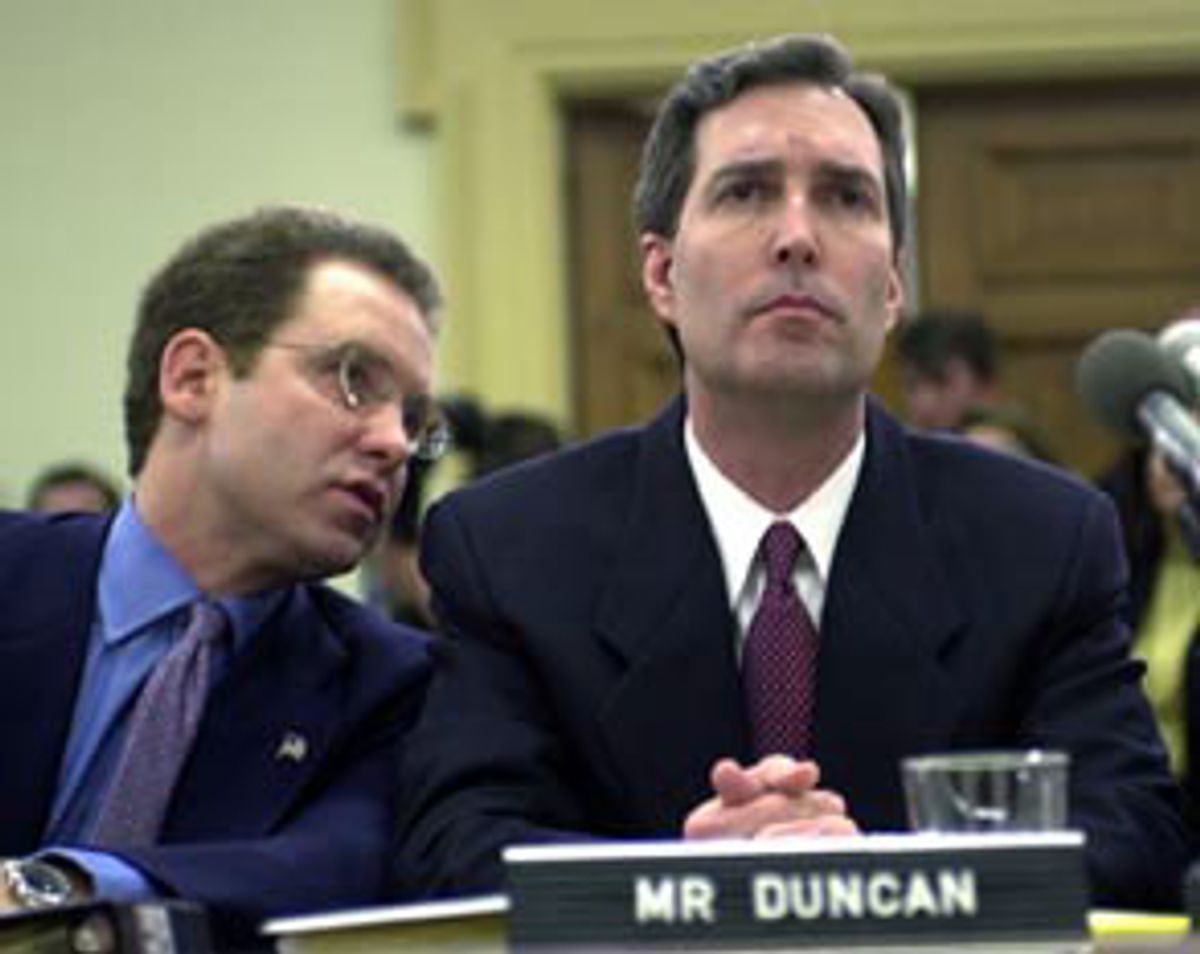 Like Charles Dickens' Ghost of Christmas Future, former Securities and Exchange Commission chairman Arthur Levitt Jr. came to the Senate on the first day of this year's Enron hearings bearing nothing but pessimistic gloom.

As star witness before the Senate Governmental Affairs Committee Thursday morning, Levitt warned of "systematic" problems in the capital markets, an "emerging crisis of confidence" in these markets and "a cultural change eroding" the business world. After his testimony, outside the hearing room in the freshly de-anthraxed Hart Office Building, Levitt painted an even starker picture, predicting to reporters that revelations of other "Enrons" -- minus the egregious incidents of fraud -- would be made public in the next few months.

Because of the problem of "disguising the numbers and hiding the numbers in earnings" brought to light in the Enron scandal, Levitt said, other companies will be forced to 'fess up to "Enron-like problems in terms of numbers that mislead." These companies, he said, will have to amend their misstatements, which would be costly to investors. This was due to the "animal juices" salivating throughout Wall Street, Levitt said, leading to rampant and destructive quomodocunquizing throughout the investment world.

"Enron's collapse did not occur in a vacuum," Levitt said during his testimony. "Its backdrop is an obsessive zeal by too many American companies to project greater earnings from year to year." Calling the actions "gamesmanship," Levitt had harsh words for everyone: the business executives who "bend the rules and tweak the numbers"; their companies that bend to the desires and pressures of Wall Street analysts instead of dealing honestly with their earnings; those analysts who too often "overlook dubious accounting practices and too often are selling potentially lucrative investment banking deals"; the auditors preoccupied with pleasing the client instead of picking up the company's problems; and on and on.

Enron's particular scandal of shell partnerships, allegedly corrupt executives, hyperoptimistic analysts, complicit auditors -- not to mention the strumpetocracy in the White House and on the Hill -- squished all too easily and inconspicuously into this already sullied cesspool.

Two years ago, Levitt issued warnings that accounting agencies like Arthur Andersen LLP should not be permitted to serve companies like Enron as both auditor and consultant. But he saw these concerns washed away in a sea of corporate campaign contributions.

Thursday, Levitt returned to a chastened Senate. The Senate hearing, chaired by Sen. Joe Lieberman, D-Conn., was just the first of many public explorations of Enron's various defalcations that will be held by at least seven congressional committees in the coming months.

"This scandal cries out for thorough congressional investigation to make sure that nothing like this ever happens again," Lieberman said.

"Where were the watchdogs here?" asked the committee's ranking Republican, Sen. Fred Thompson, R-Tenn. "Where were the auditors? The law firms? The board of directors? The analysts? The governmental agencies?"

While Lieberman and Thompson opened their inquiry, on the other side of the Capitol Dome members of the aggressive House Energy and Commerce Committee sat and listened to fired Arthur Andersen LLP partner David Duncan invoke his Fifth Amendment right against self-incrimination. Duncan, until last week the company's lead auditor of Enron, supervised a mass shred-a-bration of Enron-related documents. As Duncan refused to comment, Rep. Jim Greenwood, R-Penn., chairman of the committee's investigations and oversight subcommittee, lashed out from the dais. "Enron robbed the bank, Arthur Andersen provided the getaway car and they say you were at the wheel," he said.

The House hearing, chaired by Rep. Billy Tauzin, R-La., also featured current Andersen representatives, all of whom tried to pin the blame on Duncan. A committee spokesman later called their attempts "unconvincing."

Enron was all the rage throughout the city. Inside the Capitol, Senate Majority Leader Tom Daschle, D-S.D., introduced a new word into the political lexicon. "I think that we are slowly Enronizing the economy," the South Dakotan told reporters. "Enronizing the budget." Daschle used the term to try to equate Enron's collapse with Bush's budget proposals. Like Enron, the argument goes, the Bush budget took from the poor and middle class and gives to the rich.

At the White House, spokesman Ari Fleischer was asked if the president was going to ask his biggest supporter throughout his political career, former CEO "Kenny Boy" Lay, to contribute "$29 million of the $30 million he got away with" to an employees fund, as several politicians have done with their Enron contributions. "The president thinks the best way to help them is through changes that can possibly be made to the nation's pension laws," Fleischer said.

Back at the Senate hearing, senators were tripping over themselves to condemn Enron and praise Levitt, who said that "it's well past time to recognize that the accounting profession's independence has been compromised." It must have been a satisfying "I told you so" kind of return for Levitt.

Though he told reporters that the SEC regulation change probably wouldn't have been enough to prevent the Enron chicanery, his lonely unsuccessful crusade in 2000 makes him the previously unheeded wise man -- the Gary Hart or Warren Rudman -- of the Enron debacle.

Sen. Carl Levin, D-Mich., made this point when he thanked Levitt for carrying his "intense and often lonely battle to curtail the conflicts of interest ... Mr. Levitt knew what he was talking about, but not many wanted to listen. The question is whether we've learned the lesson Mr. Levitt is still trying to teach."

The many who didn't want to listen weren't far away. "There were constant threats that our budget would be cut," Levitt told reporters after his testimony. Members of the Senate rattled their sabers, he said, warning him that they would attach a rider to an appropriations bill and the SEC "would not be funded if we went ahead with this initiative."

The accounting industry spared no expense to kill Levitt's plan, he said, hiring "six or seven lobbying firms" and flying in the accountant to Sen. Ted Stevens, R-Alaska, head of the Senate Appropriations Committee, to lobby the powerful chairman. "What they didn't realize was that Ted Stevens is a good friend of mine," Levitt said. The members of Congress coming at him came from the Senate Banking Committee, he said, "but it wasn't just Banking. It was all over. From people you'd never even consider."

One of those individuals, committee member Sen. Bob "The Torch" Torricelli, D-N.J., identified himself at Thursday's hearing and offered a mea culpa. After a presentation, complete with charts, of the problem of "outrageous overstatements" of profit by various U.S. corporations, Torch sucked it up and proceeded with what must have been an entirely painful process for a senator not known for either humility or contrition.

"We were wrong," Torricelli said. "You were right." He then scurried out of the hearing room.

Sen. Bob Bennett, R-Utah, was the only one to continue to voice concern with Levitt's proposal at Thursday's hearing, arguing that small and medium-size businesses might find it an unnecessary expense. Levitt recalled that when he testified before the Senate Banking Committee in favor of his proposed regulation on Sept. 28, 2000, he was asked, "Where's the smoking gun?" that compelled him to make such a change.

"I asked that question," Bennett recalled.

"I don't think that question is being asked anymore," Levitt said. Back at that September 2000 hearing, Levitt warned the Banking Committee members that "My job is actually to smell the smoke before it gets to you and I can't afford to ignore the dramatic changes that have taken place in the industry." He was, of course, ignored.

"It's wrong to hire a firm's auditor as a consultant," Levitt said Thursday. "It looks bad and it feels bad and it smells bad." He said that he knew his concerns about the accounting industry and investor confidence were spreading when seven months ago his dentist said to him, "Those accountants are really scalawags, aren't they?"

Indeed, Levitt's recommendations seem likely to be adopted by Congress in the wake of the Enron debacle. But the proposals for changes aren't going to stop there. Sen. Jean Carnahan, D-Mo., announced that she was offering a bill requiring executives of publicly traded corporations to inform the SEC about any sales of that stock that they make -- immediately, and electronically.

Some called for the creation of a new oversight government entity to monitor the accounting industry. "The era of self-regulation is over," Thompson said. Lieberman raised the question of whether companies with employee 401Ks should allow no more than a 20 percent investment in company stocks.

While Enron will now be used as the example in passing new regulations, the company's demise also seems to have breathed new life into campaign finance reform. Despite the opposition of House Speaker Dennis Hastert, R-Ill., and soon-to-be Majority Leader Tom DeLay, R-Texas, the required 218 congressmen had finally signed a "discharge petition" to force a vote on the campaign finance reform bill offered by Reps. Christopher Shays, R-Conn., and Marty Meehan, D-Mass. Spurred on by the Enron scandal, the final four members of Congress -- Reps. Tom Petri, R-Wis., Charlie Bass, R-N.H., Corrine Brown, D-Fla., and Richard Neal, D-Mass. -- signed the petition, forcing a vote on the bill, which would ban the unregulated unlimited "soft money" donations given to political parties.

Lieberman interrupted the hearing to give the news that campaign finance reform, which had been left for dead in the House, was back again.

"Bravo," said Thompson, a rare GOP supporter of the measure.

Though Lieberman usually only allows opening remarks by himself and Thompson, for this high-profile issue all 14 senators present got the chance to speak. All of them took the opportunity to do so.

"After all of the sound and fury of these investigations, the bottom line questions are: Is Congress willing to amend the law to rein in the greed of the next Enron?" asked Sen. Dick Durbin, D-Ill. "Over 100 million Americans who own stock and 42 million who own 401Ks will be watching to see if these hearings ... are about more than face time on the nightly news."

As the hearing proceeded, cameras and reporters slowly trickled from the room. And so did senators. By 1:30 p.m., only Lieberman, Thompson, Bennett and Levin were left.

All the lobbyists were firmly in place.