"The Count of Monte Cristo"

The classic book had a lot of complex, smart things to say about revenge. The movie doesn't. 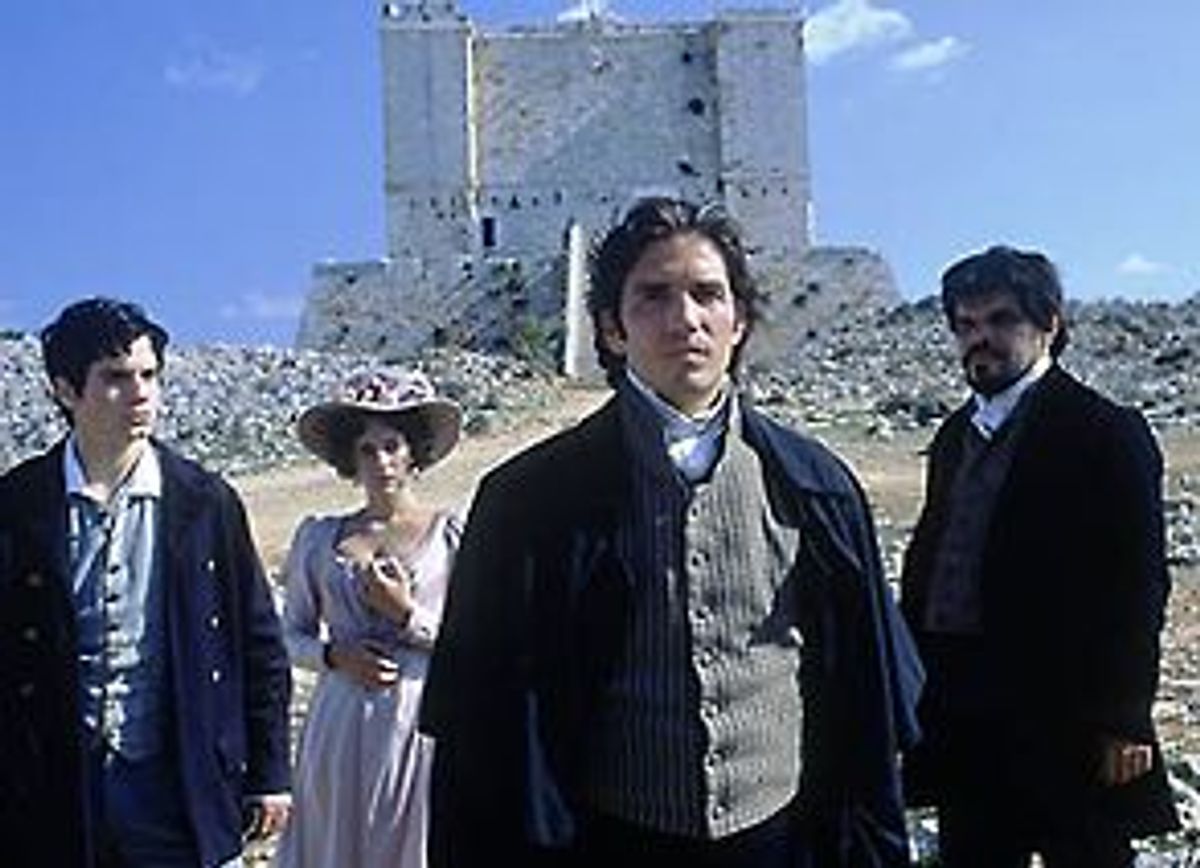 Alexander Dumas' great popular novel "The Count of Monte Cristo" is about revenge. For anyone who hasn't read it, or who forgot the details since they blew through it when they were 14, it also happens to be about adultery, infanticide, hash, lesbians, deception, disguise, torture, suicide, execution, slavery, transvestites, pirates, smugglers, duels, poison and vampires.

Kevin Reynolds's new film version of the novel is also about revenge. It's also about true love -- and sword fighting. To say the film doesn't quite recapture the thrill of the novel is like saying that soda pop doesn't really have the same kick as heroin.

That's a shame, not because the film betrays the plot, or because it zooms over a lot of its unsavory pleasures, but because the novel actually has a lot of smart, complex things to say about revenge. It's also a hell of a lot of fun to read.

Reynolds has exactly one note to sound on revenge, and it's not very interesting. His point is that justice is more rewarding, mercy trumps both and love melts away hatred. Or something like that.

If the film -- apparently the 16th movie adaptation since 1908 -- were even slightly entertaining, it might be easy to forgive as a piece of flawed advertising. (Good films encourage people to investigate the source; right now, 546,382 people are paging through "The Lord of the Rings.") But as it plays, it commits the gravest sin against great literature -- it makes it boring.

Director Reynolds ("Robin Hood: Prince of Thieves" and, um, "Waterworld") has thrown out all the rich subtlety and deep irony of the novel in favor of neat resolutions. In the film, Edmond Dantes (Jim Caviezel) is a young sailor with a wonderful life ahead of him. He's just been appointed captain of a shipping vessel and he's proposed to his beautiful girlfriend Mercedes (Dagmara Dominczyk).

Dantes' best friend (Guy Pearce) and a jealous sailor arrange to have the guileless young captain arrested for his unwitting support of the exiled Napoleon. With the help of a magistrate who wants to protect his own career, Dantes is shipped off to a cruel island prison and locked away for 13 years.

Dantes spends his time in the clink scrawling hash marks on the wall, counting stones and swearing revenge. Eventually he meets fellow prisoner Abbe Faria (Richard Harris), and the two spend years digging a tunnel while the Abbe educates his illiterate compatriot and teaches him how to fight.

Abbe wills the young man a fortune in gold and jewels, and after Dantes' escape he uses the money to refashion himself a count and finance his revenge against the three men who sold him out, especially his best friend, who has since married his precious Mercedes.

We know that Dantes will succeed. He is, after all, richer, angrier and blessed with better teeth then any of the other characters. But we also know this because every moment of the movie is telegraphed ahead of time. When a chess piece turns up at the start of the film, you can bet that you're going to see it again at some critical dramatic moment. There's also, of course, some portentous line from Napoleon about kings and pawns that comes around again as well.

There are a couple of bright spots in the film. The location work is at times stunning, featuring a glorious Mediterranean Malta and some sumptuous Irish estates standing in for Marseilles, Paris, Monte Cristo and Rome. And the costuming is ace: The Count gets a hint of Oriental flair, and Guy Pearce bulges from his tailored plumage in all the wrong places.

Jim Caviezel as the Count is a bit of a cipher, but he manages to keep from breaking into peals of laughter when he says things like, "Why did you send me to hell?" Guy Pearce, on the other hand, is absurdly overblown as the pouty rich-boy friend. He practically drools over Mercedes, salivating like a sallow-cheeked underwear model staring at a line of coke. Both could learn a few moves from Richard Harris' aging, imprisoned Abbe, who ambles around his cell with a step that says he hasn't been beaten down yet.

The main problem in "Alexandre Dumas' The Count of Monte Cristo" is that the filmmakers think they're making an action movie that demands a tightly edited sword fight every 15 minutes. It's easy to see where they got confused -- after all, revenge drives most action movies. But the original Monte Cristo story moves not on action, per se, but procedure. It's like a detective novel. The important thing is not that the Count gets his men, but how he gets them.

That's a part of the story that the 1934 version of the movie, starring Robert Donat, rendered well. That version is generally considered the best adaptation of the novel. The new one borrows some of its plot devices. But in its own way, the old classic is equally ridiculous: The difference between the two is that the 1934 version overplays the talky exposition -- it's all procedure and very little life.

The brilliant conceit of the novel -- left out of the picture -- is that the Count of Monte Cristo tailors his revenge with extraordinary patience, uncovering each man's fatal flaw and exploiting it so the villains practically do themselves in. We never doubt that he's just, that he deserves revenge, that he can choose who lives and who dies. Neither does he, and ultimately his hubris kills an innocent, an accident that humbles a man who more or less believed himself more than just an agent of justice. He's not God, he realizes.

The film never allows for that kind of shading. It has the base character arc that we expect from a serviceable screenplay: The Count knows love as Dantes, becomes consumed with revenge, and then becomes overpowered by love. At the end, he realizes his family is more important than anything. Watching it unfold, you come to wish the Count would just kill you in your movie seat. To borrow a conceit from the film, his pistol isn't even loaded.