"A Walk to Remember"

Mandy Moore stars in a squeaky-clean teen romance in which the kissing stops before things get too hot and heavy. 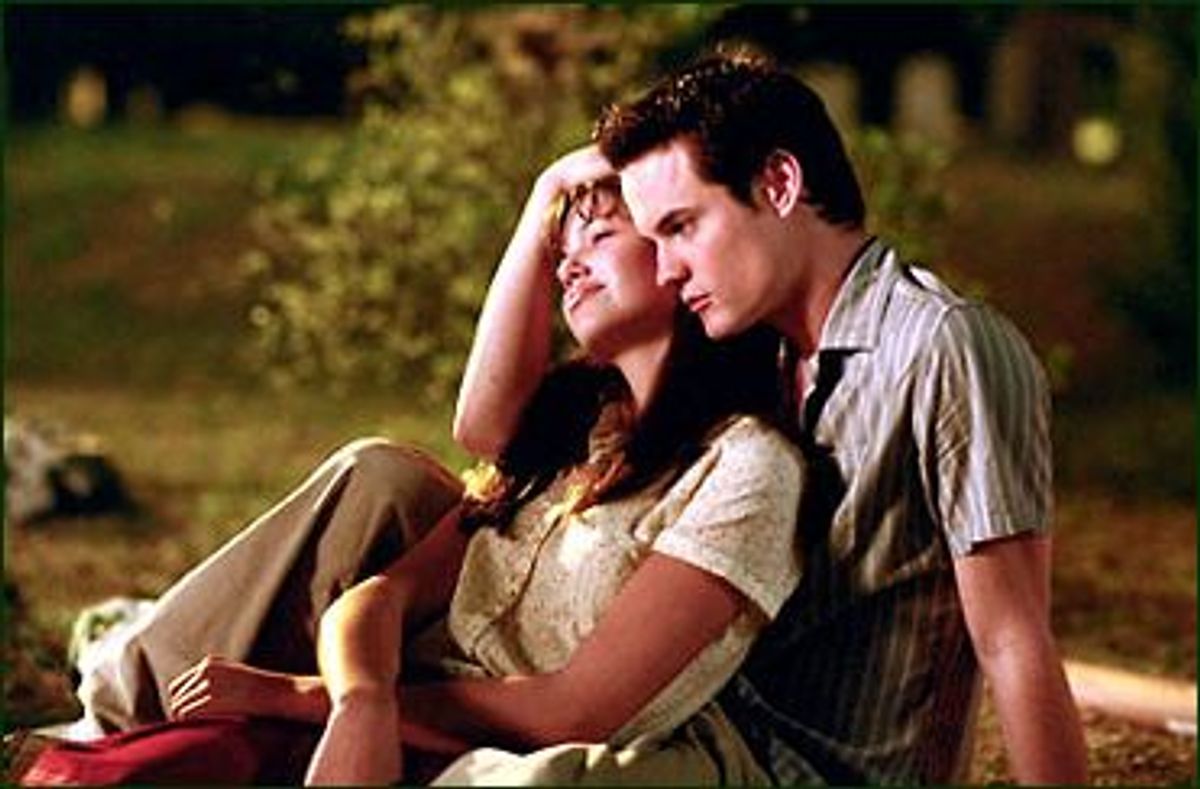 In the days before there were penises and vaginas -- this would have been back in the 1950s or a little before -- teenage premarital sex never happened, and that's just as it should be. Things are different now, but "A Walk to Remember" reminds us it's never too late to return to a more innocent age, a time when teens were much more excited about science fairs, stamp collections and a good hot bowl of oatmeal in the morning than about wantonly giving away their most precious possessions -- themselves! -- to members of the opposite sex outside the holy bonds of matrimony.

"A Walk to Remember," directed by Adam Shankman and adapted from Nicholas Sparks' novel, is a vehicle for teen singing sensation Mandy Moore. As vehicles go, it's an Edsel. Sparks' novel was set in the '50s, but the movie is set in our own woebegone, hell-in-a-handbasket contemporary times. In a small town in North Carolina, Landon Carter (Shane West) is a bright teen who's nonetheless headed for trouble: A friend of his is injured as the result of a nasty prank he'd planned, and there's strong evidence he just might end up on the wrong side of the law. (At one point a school counselor calls Landon in for a talk and somberly lines up a row of empty beer bottles on his desk.) Landon doesn't care; he's the cool kid. But when he's assigned to community service as the result of his prank (among the requirements is that he appear in a dorky school play -- wouldn't you rather scrape chewing gum off the highway?), he finds that he's in over his head, what with memorizing lines and all.

He enlists the help of the local preacher's daughter, wholesome, no-nonsense and allegedly "plain." (Though it's Mandy Moore we're talking about here.) Jamie Sullivan is a nice, modest girl with big dreams and even bigger dresses. (She favors "Little House on the Prairie" muumuus that envelope her from neck to ankle; Mennonites would look like dance-hall girls next to her.) Jamie has a list of things she wants to see and achieve in life: Witness a miracle! Get a tattoo! (As if!) See the rare Comet Kooklafrananollie (or something like that) through her telescope! And last but most important: She wants to get married in the church in which her dead mama was raised and married herself. Inevitably, Landon the popular kid and Jamie the born-again geek fall in love.

If you're sensitive to spoilers, read no further. But otherwise you'll want to know that Jamie also has -- cough! -- a dark secret. Bobby Goldsboro used to sing songs about girls like her, if you know what I mean. Yet Jamie's faith and her strong sense of self add up to mean no nookie until wedding bells ring. Landon, a good boy at heart, respects her wishes and obliges by stopping the kissing when things start to get hot and heavy.

By now you might wonder, What on earth is going on here? Unfortunately, it won't make any more sense if you actually see the movie. Shankman (who also directed "The Wedding Planner") and screenwriter Karen Janszen bungle their way through the narrative as if it were a series of Bible parables and not an actual story -- in fact, the story is secondary to the movie's grand lessons, which are thumpingly obvious. West and Moore, respectively, brood and pout cutely. They're so wooden that it's probably just as well they're not bumping uglies -- that clog dance would likely wake up the whole neighborhood.

Moore's Jamie is stalwart and dignified in the face of death. Her big moment comes when she faints with a dramatic thunk into the arms of her father (Peter Coyote, a fine actor who's ill-served in this stinkeroo; Daryl Hannah, as Landon's mom, fares just as badly, done up in an unfortunate dark-brown page boy that makes her look like a female impersonator). Moore also gets a few chances to sing: She steals the spotlight with a melisma-laden solo in the church choir. Meanwhile, the congregation beams approvingly, oblivious to the fact that she seems to think they're all talent scouts instead of humble worshipers gathered to praise God's glory.

Shockingly, "A Walk to Remember" is rated PG, probably because the mere act of keeping vaginas and penises apart is an overt assertion of their existence. And as we all know, it was never in God's plan that they should exist at all. Eve handed Adam that apple and it was all downhill from there. To hide her shame, Eve headed to the Laura Ashley store and enveloped herself in ditzy cotton prints. The good news is, she eventually found her way to Victoria's Secret. In this movie, Mandy Moore is still lost at the mall.