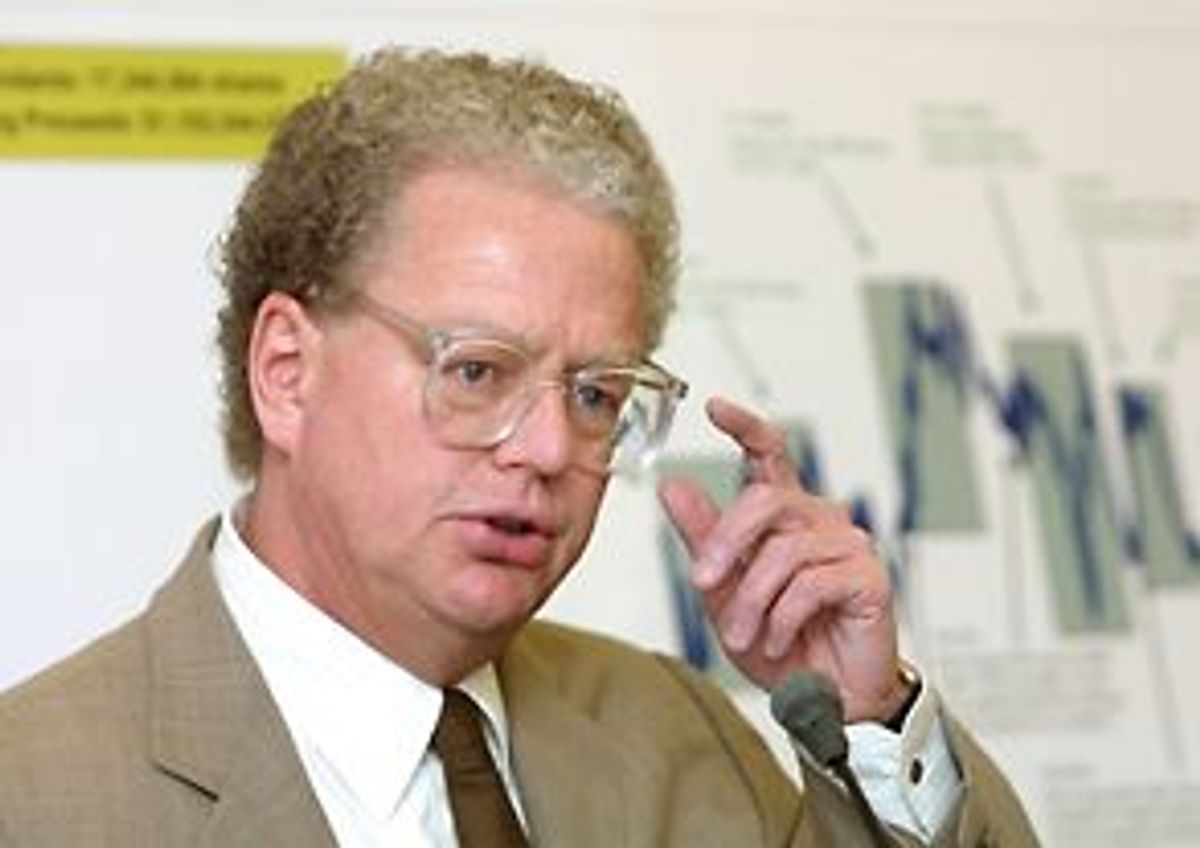 It's midmorning on yet another sunny day in San Diego, but inside Bill Lerach's downtown office, a storm is brewing. "Where's the person interfacing on Arthur Andersen!" Lerach barks, sending one of his assistants scurrying to a phone.

Inside a cluttered, windowless study, Lerach finds a seat. Behind him are books upon books chronicling the misdeeds of modern capitalism. "Den of Thieves." "Money Machine." "The CEO's Complete Guide to Committing Fraud" (two copies!). And, of course, "Financial Shenanigans." But Lerach has no time for reading these days, unless it involves the financial books, records and boxes of shredded-document confetti associated with the bankrupt energy trader Enron and its now-tainted independent auditing firm, Arthur Andersen.

As the 60 class-action suits already filed against Enron are amalgamated into one, Lerach is angling for lead counsel. For the longtime thorn in the side of corporations everywhere, it could be the plum assignment of his life. The Enron case is shaping up to be the mother of all class-action claims.

Lerach, partner with Milberg Weiss Bershad Hynes & Lerach, has a well-earned reputation as the scourge of corporate America, loathed in boardrooms across the country for suing companies at the mere drop of a stock price. So loathed, in fact, that Congress passed a law in 1995 aimed specifically at deterring Lerach from filing "frivolous" shareholder class-action claims.

The law, called the Private Securities Litigation Reform Act, failed miserably. Lerach was busier than ever last year, instigating or involved with 60 percent of the 487 class-action lawsuits filed in 2001 -- double the previous record set in 1998, according to statistics compiled by the Stanford Law School Securities Class Action Clearinghouse. Thank the boom and inevitable bust of the dot-com era, when all manner of tech and other companies scrambled to go public.

Class-action lawyers, and Lerach in particular (an article in Wired magazine once dubbed him a "blood-sucking scumbag") are not widely viewed as white knights of the courtroom. But as the Enron fiasco demonstrates with astounding clarity, in an era when accounting firms are in bed with the very companies that they are supposed to be auditing, and federal oversight is under continued assault by the forces of free market deregulation lobbyists, class-action lawyers like Lerach may be the only viable defenders of shareholder and employee interests.

"He believes the little guy gets screwed all the time," says John F. McCarrick, partner with Duane Morris & Heckscher in New York and executive member of the Professional Liability Underwriting Society. "I would find it hard to demonize him."

And yet, even as Lerach jockeys to become the point man representing plaintiffs in the Enron affair, a Los Angeles grand jury reportedly is investigating allegations that Milberg Weiss improperly paid off victims to appear in lawsuits, including a Beverly Hills eye surgeon who was convicted in 1999 for faking an art theft to collect $12.5 million in insurance. The surgeon Dr. Steven G. Cooperman, has been a recurring plaintiff in class-action lawsuits filed by Lerach's firm.

Lerach declined to comment on the accusation. In any case, he makes no apologies for his brand of litigation. When it comes to policing corporations, "I really believe we're better than the criminal justice system, better than the Securities and Exchange Commission," Lerach says. "Corporations fear us more than they fear anything else."

Fortified with his daily dose of buttermilk, Lerach clears space on a table cluttered 2 feet high with articles chronicling a raft of corporate misdeeds over the last decade, including, of course, fresh dispatches related to the ongoing Enron affair.

"I would say it's like nothing we've seen before," Lerach says of Enron. Lerach's firm is among dozens gunning for the remains of what was once supposed to be America's seventh-largest corporation. He reels out the facts: $1.1 billion in insider trading; $618 million from admittedly falsified earnings reports; $1.25 billion in falsified shareholder equity.

"You're going to look long and hard to find those numbers in any other securities case," he says. "Once in a while, a strange confluence of factors come together and there's a scandal that changes things. This thing has so many layers and it will take a while to get to the core, but I think this will likely change things. How, I don't know."

For starters Lerach would like to see captains of industry held financially responsible for accounting misconduct. Such was the case with former Sunbeam CEO "Chainsaw" Al Dunlap, who in January agreed to pay $15 million in a settlement stemming from a fraud case Lerach's firm handled.

Lerach's business is booming. Not only are the numbers of class-action securities cases on the rise, so are settlement and damages awards. National Economic Research Associates in New York estimates that the average shareholder class-action settlement approaches $15 million, up from an average of $8.4 million prior to passage of the Reform Act. Among the reasons: Today, plaintiffs' attorneys are spending more billing hours upfront preparing stronger cases.

The Reform Act was supposed to clamp down on the number of supposedly unjustified class-action claims. But in the years since its passage, other factors encouraged companies to become more and more lax in their accounting, thus setting the stage for an increasing number of legitimate lawsuits. Auditing firms increasingly were drawing bigger bucks for consulting and other services for the same companies they were supposed to be auditing. "Pro forma" accounting permits companies to structure their earnings statements so as to disguise poor performance. The Reform Act also allowed corporations to issue rosy "forward-looking statements" that often have little basis in accounting reality.

Many of Lerach's archenemies, including Alan Salpeter, a Chicago attorney who won $50 million from Lerach in a legendary malicious prosecution case, grumbled last spring about the need to strengthen the Reform Act. The onset of recession further fed desires to erect more protective barriers around corporations. Among the goals: capping plaintiffs' attorney fees, raising pleading standards, placing restrictions on who can be included in a class action, recalibrating the formula for determining damages -- anything to keep Lerarch from continuing to file his "frivolous" claims.

But any talk about reforming the Reform Act is out the window in the wake of Enron.

"I don't think you'll find too many sympathetic ears in Washington for strengthening the act," says Michael Perino, professor of law at St. John's University. "Not today."

If anything, what with congressional hearings, criminal investigations and, yes, shareholder class-action claims stemming from the decimation of employee 401K plans, the Enron mess is shooting regulatory firepower in the opposite direction.

"There need to be new standards on what needs to be reported," says SEC spokesman John Nester, which may include requiring companies to alert investors when key nonexecutive employees quit -- a warning sign of a troubled business.

After Enron's plight came to light, SEC chairman Harvey Pitt said publicly that he wanted new laws that require more thorough and "real-time" disclosure of financial reporting. But Pitt, a former attorney for tarnished auditing firm Arthur Andersen, is the guy who led attacks against previous SEC chairman Arthur Levitt's attempts to tighten accounting regulations. As such, Pitt drew fire for being a tool of the accounting industry.

Case in point: Pitt stops short of wanting to prohibit the Big Five auditing firms (Andersen, Ernst & Young, Deloitte & Touche, PriceWaterhouseCoopers and KPMG) from accepting hefty consulting fees from the same corporations they're supposed to be auditing. In 2000, for instance, Sprint paid Ernst & Young $2.5 million for audit services, but $63.8 million for consulting and other tasks. General Electric paid KPMG $23.9 million for audit work while forking over $79.7 million for consulting. That same year, J.P. Morgan Chase paid PriceWaterhouseCoopers $21.3 million in audit fees, but $84.2 million for other work, including consulting. The examples show that "independent auditor" can be a contradiction in terms.

As a result, says Lerach, "We've seen the dot-com phenomenon, where trillions of dollars were raised by companies that had no business going public other than to create huge profits for venture capitalists and huge fees for the investment banks that took them public. It was the most massive transfer of wealth from public investors to the venture capitalists and their investment banking friends in history. And, frankly, it was largely accomplished by financial accounting fraud by the large accounting firms."

Problems go beyond obvious conflicts of interest. Audit firms conduct random samplings from earnings reports, not forensic examinations. And in many cases auditors are unfamiliar with the industry or company they're auditing.

"The real money is on the consulting side," says McCarrick. "Brighter minds go to consulting, and who's left on the auditing side? The B team."

What makes Enron spectacular is the sheer scope of its demise and its tendrils into the highest office in government. Yet while the klieg lights of inquiry have Enron in the spotlight, the corporation that boasted a Midas touch is not an aberration. If it were, the SEC wouldn't be tongue-lashing the corporate world. This month, the SEC's Pitt groused about a pattern of growing earnings restatements, audit failures and corporate implosions that have triggered investor losses.

"Somehow, we must put a stop to a vicious cycle that has been in evidence for far too many years," Pitt said Jan. 17.

But Pitt's sanctimony loses some of its edge considering that, not so long ago, he lobbied to relax the kind of federal oversight authority that might have prevented this "vicious cycle."

The about-face is striking. In December, for example, two days after Enron filed for Chapter 11 bankruptcy protection, the SEC warned public companies to better explain their reasoning behind releasing pro forma results or else risk civil litigation. The SEC also warned investors that "pro forma financials ... should be viewed with appropriate and healthy skepticism."

Pro forma reporting allows companies to exclude certain one-time quarterly gains or expenses from earnings results. Pro forma accounting was rife at Enron and de rigueur among money-losing dot-com companies, which used the technique to hide ugly red ink. While most of those dogs are no longer running, pro forma reporting remains common. Cisco, currently embroiled in a securities fraud case with Lerach, routinely excludes ordinary costs such as payroll taxes on stock-option exercises from its earnings reports. Qualcomm does the same thing.

Attempting to put more bite in its bark, the SEC this month announced its first pro forma enforcement case, initiating "cease-and-desist" proceedings against Trump Hotels & Casinos for making misleading accounting statements in the company's third-quarter 1999 earnings release. Trump's rosy results, the SEC concluded, "were primarily attributable to an unusual one-time gain rather than to operations."

But as federal regulators and politicians mull passage of new laws to keep corporate America from running amok, it may be illustrative to recall the unintended fallout from the Reform Act. In the absence of any real securities fraud enforcement, it may well be that more laws on the books will simply offer more opportunities for companies and their accounting firms to violate them. Which, in the end, will only mean more work for the boardroom's least-loved litigator.

"As long as the system creates incentives for people to commit fraud, you'll continue to see a lot of securities cases," Lerach says.

"We're not done yet. There are more Enrons out there."

Mike Drummond is a freelance writer and author of "Renegades of the Empire."