"I don't think I was cut out to be a director"

Todd Solondz explains why moviemaking is a nightmare. Plus: The sex Americans are not allowed to see in his new film, "Storytelling." 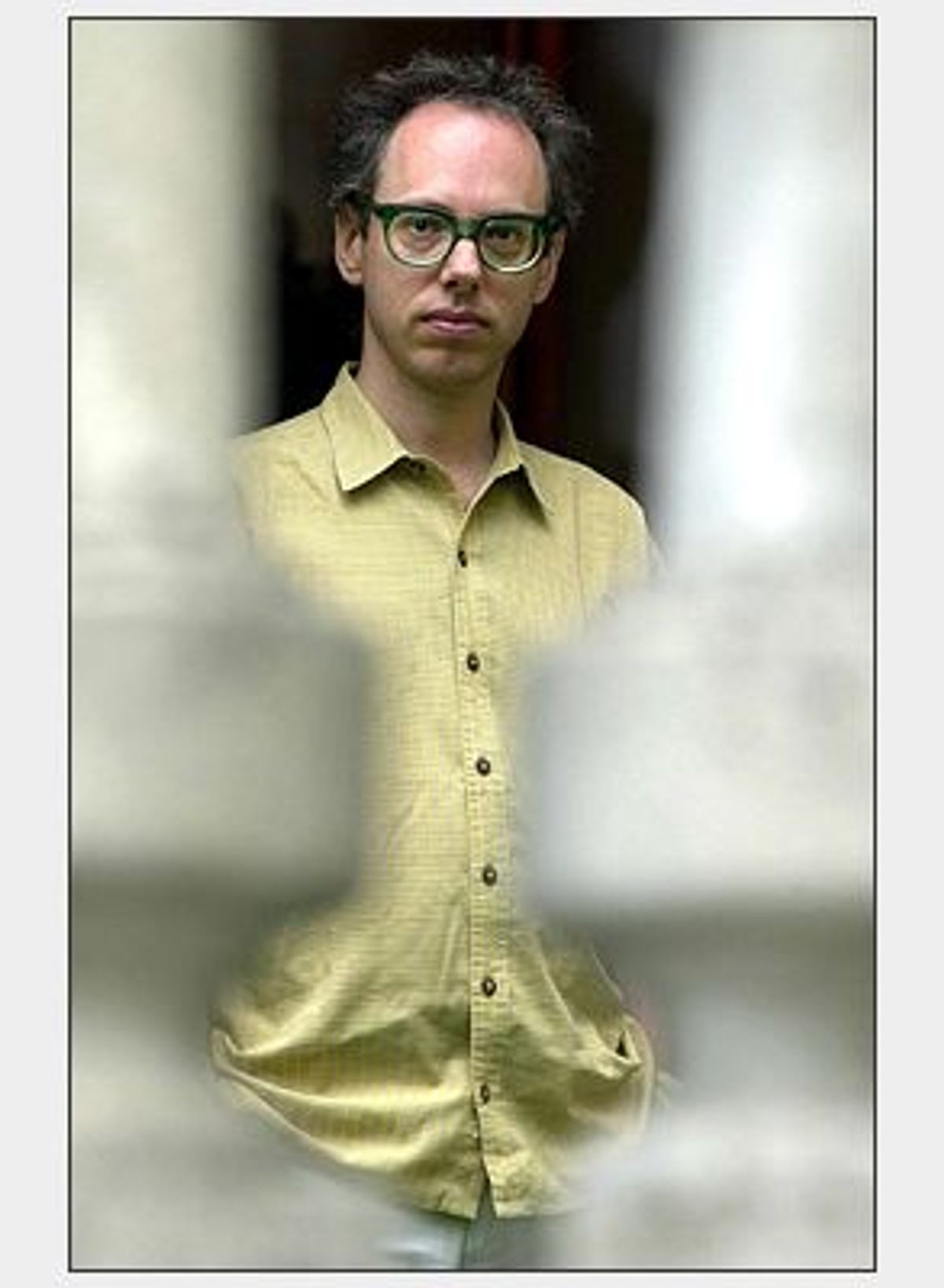 No one said life was fair -- especially not Todd Solondz. The unsparing social critic broke though a post-film-school funk in the mid-'90s with "Welcome to the Dollhouse" and "Happiness," love-'em-or-hate-'em satires bursting with cruelty, hypocrisy and the kind of middle-class suburban dysfunctionality that has since matured into the cinematic shorthand used in films like Sam Mendes' "American Beauty." Laid bare, Solondz's themes -- rape, pedophilia, murder -- are so repulsive to some that with neither explicit intercourse nor violence, "Happiness" received an NC-17 rating from the MPAA.

Solondz's newest film, "Storytelling," is more chilling than humanistic. Structurally, the film is cleft into two autonomous parts: "Fiction" and "Nonfiction." In the first, the shorter "Fiction," Vi (Selma Blair) plays a graduate student headed for the imminent collapse of her craven, reflexively p.c. world. Her boyfriend Marcus (Leo Fitzpatrick) has cerebral palsy, and together they are taking a creative writing class taught by the sole celebrity of their white, second-tier liberal arts campus: black, Pulitzer Prize-winning author Mr. Scott (Robert Wisdom). After a breakup with Marcus, Vi runs into Mr. Scott in a college bar, and allows him to seduce and then sodomize her. In order to get an "R" rating, Solondz agreed to visually censor the sodomy scene. Consequently, the images of Vi and Mr. Scott are covered by a prominent red box.

In "Nonfiction," Toby Oxman (Paul Giamatti) plays a novice filmmaker. While combing a local high school for a documentary about the pressures of college admissions, he meets fame-hungry student Scooby Livingston (Mark Webber). The Livingston family, under the impression that being on TV is a good thing, overlook Toby's lack of experience and welcome his camera into their home. The Livingstons' upper-middle-class dysfunctionality makes for subplots richer than Scooby's deadbeat ambitions. And the relationship between 11-year-old Mikey (Jonathan Osser) and the family maid, Consuelo (Lupe Ontiveros), provides startling insight into the willful callousness of privilege. "Storytelling" is currently in limited release, and will open in most of the country on Feb. 8. I spoke with Solondz in his Park City, Utah, hotel room during the Sundance Film Festival.

I understand the making of "Happiness" was quite stressful for you in the aftermath. How was the shooting of "Storytelling"? Does it get any easier as you go along?

No, the process is always assaultive and nightmarish and horrible. If I'm going to make another movie, I just have to make sure it's worth putting myself through this.

What's the most stressful part?

The shoot, the actual production, is really the most stressful period for me. This shoot lasted two months; it's always assaultive and physically draining and fraught with all sorts of compromises that are part and parcel of the job. Some people have a directorial character. As for me, I don't think I was cut out to be a director. I'm not a director because I want to be. It's more that I don't want someone else to direct my stuff; if someone's going to screw it up, I'd rather screw it up myself.

Some people get excited from all the power they imagine they have being a director on the set. It gives me no pleasure -- I just don't have the personality for it. I'm completely absorbed in the process as it's taking place, but very little of your time is spent with actors directing them; most of my time is spent figuring out all sorts of logistics, such as which location we're going to use the next day and how the economic reality bears down on what you want to do artistically. I'm not the ideal director, but I haven't yet found an alternative.

How did you decide to split "Storytelling" into two parts?

You always want to do something different -- find a fresh structure, a fresh form and a different way of tackling what may be identical geographical material. Initially, I thought I'd do a college movie; I was thinking of "Carnal Knowledge," and then I thought actually of "Full Metal Jacket," also, but only in terms of structure, in the sense that there was a short prologue followed by a longer sequel. What I found after writing my first part, the fiction part, was that I didn't want to do a sequel. I had no interest in that.

I wanted instead to come from some of the same ideas and themes, but from a different angle, different story, characters and so forth, and so at the end of the day, they would represent two panels of a painting. For some, the connections might be somewhat oblique, but for me, it's very much one movie.

As a film about exploitation, it's hard to know in the first part, "Fiction," what's going on. In your words, between the Selma Blair and the Robert Wisdom characters, who is exploiting whom?

Selma Blair's motives are not as pure as they might appear in what she wants and what she's pursuing, and what he's going to get from her. It's all fraught with ambiguity. Robert Wisdom is the lone black teacher on this white liberal arts campus; he's well aware of his status. It's really a story of a girl who gets into deeper water than she realizes. It's a dance that takes place between the two of them; they both try to get something from each other, and the end result is humiliation and degradation and exploitation.

The red box that covers up the sex scene is a domestic ratings mechanism, but it nevertheless gets such a laugh in screenings.

The fact is, the studio didn't want any big red box: It was "over my dead body," they said. But I had it in my contract that I had the ability to put boxes and beeps wherever necessary in order to procure the "R" rating; I feel the audience is entitled to know what they're not allowed to see.

The alternative is to remove the shot, and this is something I found unacceptable. You only get the opportunity to see the red box in this country, and certainly that makes my movie more politically overt than anyone else's has been; it calls attention to something.

I chose red because I didn't want it to be subtle. This is a very darkly lit scene, and I needed a very strong color to pop out so there would be no ambiguity. It's not a mistake; it's right in your face: You're not allowed to see this in our country. For me it's a great victory to have a big red box, the first red box in any studio feature. For the TV network version, we have many boxes and beeps all over the place, but of course I'm not very hopeful this will ever play on network TV.

For "Happiness," when it came to the home video version, there was a lot of pressure for an R-rated version. I said I would put boxes and beeps all over the place, but they wouldn't hear of it, and of course a lot of money was lost.

To make a distinction, by the way, the MPAA is a ratings board; they're not a censorship committee. In fact, the only thing I'm not allowed to do is use the word "censor" -- that's the only word they censor. Do you ever notice on in-flight movies or on TV, they'll say, "This movie has been altered or modified," but won't say it's been censored. Studios are complicit, and there are larger forces at work, even if it's tantamount to a kind of censorship.

How did you come to cast Leo Fitzpatrick as a student with cerebral palsy?

We auditioned a number of people with C.P. We did as thorough a search as we could afford. But I couldn't find someone who could function as an actor as well as Leo could, and I love him. I cast him with the understanding he would do research to acquire some of the mannerisms that afflict someone with C.P. Of course, C.P. is an affliction with a whole range of possible degrees of manifestation; you can be wheelchair-bound, or mentally damaged, or functional with mild and unnoticeable symptoms. I needed the affliction to be apparent enough so that there would be no ambiguity that this is someone with C.P.

Do you spend any time rehearsing with your actors before the shoot?

No, I never do really. The audition is the rehearsal. With some of them I talk quite a bit; the parts are quite delicate and require a certain amount of sensitivity and bravery so I have to make sure they feel good about what they're doing. I always wonder what actors do, when they get two weeks for rehearsal. It's too expensive, but I wonder how that would come out anyway; I'm afraid to find out how little I know. My actors don't really improvise very much at all; it's pretty scripted.

[NOTE: The rest of this interview contains a major plot spoiler.]

Mikey is only 11, but seems already far more diabolical than his parents, who are perhaps only guilty of careless oblivion.

Mikey's emblematic of the moral vacuum in which he grew up. I didn't want a spoiled brat; I wanted a well-behaved, polite little boy, whom some might describe as a demon. I told the little boy, the actor, you want your parents to love you more; you want them to pay more attention to you. And of course the line which he has to use has been handed down from his family, and ironically he's the only one who looks at Consuelo as anything other than a functionary, and tries to engage with her, to understand and explore who she is.

But he has this language that's just this dagger that digs deeper and deeper with every word that he tries to get closer, it just hurts more and more. He spills grape juice; people might be horrified, but he's behaving as he's been told to behave. It's not his role to go and clean up, it's Consuelo's role, and so it only seems natural he should ask her to do that. If she's lazy, she should be fired; there's no vindictiveness.

Would he have grown up to be like his father, or worse?

In most movies, the death of the main characters denotes a bad ending, but in your films, that's not necessarily the case.