Bush rattles his saber at Iraq in his State of the Union speech; Dems applaud the terror war -- for now -- but prepare to brawl over domestic issues. 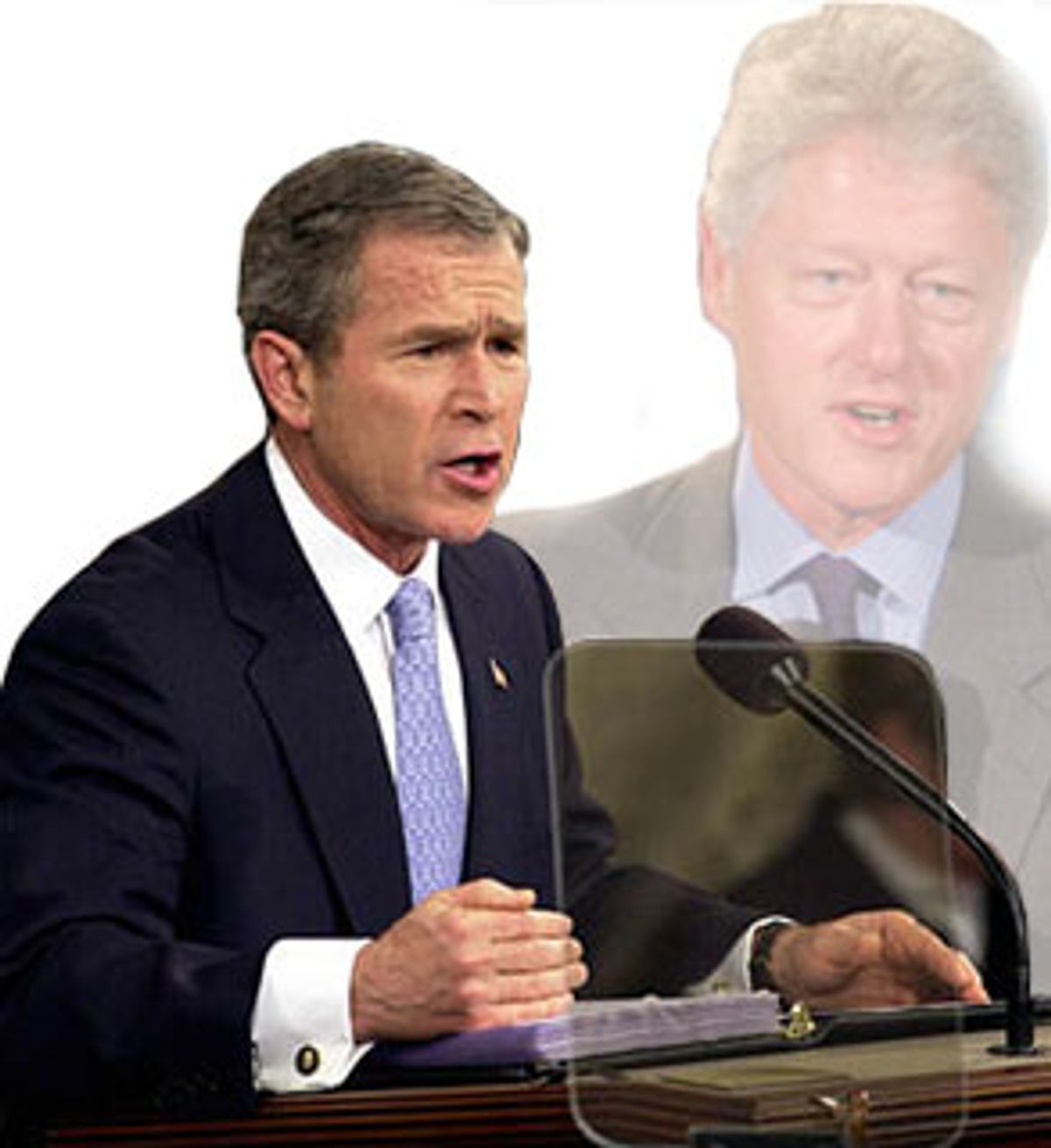 The last time President Bush addressed a joint session of Congress he delivered an extraordinary speech under extraordinary circumstances. That was on Sept. 20, when Bush gave what most consider to be the best speech of his career, simultaneously consoling a shocked and grieving nation, and outlining a plan for America's response to the attacks on the World Trade Center and the Pentagon.

But much has changed since that speech. Then, Vice President Dick Cheney was tucked away in a bunker; this time, he came out of his self-imposed exile, seated behind the president in what may have been the pair's first joint public appearance since Sept. 11. And in other signs that American political life is returning to normal, it is clear that the near-unanimous support Bush enjoyed for his domestic and international policy initiatives in the wake of Sept. 11 has evaporated. The White House faces a series of tough fights with congressional Democrats over many of his big-ticket domestic priorities. In fact, the only similarities between the Sept. 20 speech and Tuesday night's State of the Union was the continued bipartisan support for America's war against terrorism -- at least as presently defined.

Just how that war is to be defined, and prosecuted, was the biggest question created by Bush's speech. Bush dramatically changed his focus, not mentioning the name of Osama bin Laden once Tuesday, and making scant mention of al-Qaida. Instead, he appeared to be setting the stage for a new phase of America's war on terrorism, singling out Iran, North Korea and -- at much greater length -- Iraq as part of an "axis of evil, arming to threaten the peace of the world." "The United States of America will not permit the world's most dangerous regimes to threaten us with the world's most destructive weapons," Bush said.

Bush saved his harshest words for Iraq in a soliloquy reminiscent of his Sept. 20 laundry list of criticism against Afghanistan's former regime the Taliban, causing many of the punditocracy to speculate that military action against Iraq is imminent. At the very least, Bush was engaging in loud, Cold War-style saber rattling, putting the "world's most dangerous regimes" on notice.

Also significant was the fact that when he spoke of terrorist groups, Bush singled out Hamas, Hezbollah and Islamic Jihad, militant Islamic groups whose main enemy is Israel. Combined with his recent strong attacks on the Palestinian Authority's Yasser Arafat and the fact that he didn't even mention the Israeli-Palestinian conflict in his speech, this was a clear signal that Bush was continuing to take a hard anti-Palestinian Authority line.

As the president hits the road in support of the policy initiatives outlined in the speech, he will be called upon to clarify just what he meant by his comments on Iraq. Any military action against Iraq -- not to mention Iran or North Korea -- would be far more problematic than the U.S.'s brief campaign against the Taliban.

At least some Democrats appeared to support Bush's hawkish posture toward Iraq, and perhaps the Israeli-Palestinian conflict. In a statement released before Bush's speech, Sen. Joe Lieberman, D-Conn., said the speech "gives him an opportunity to define the means of victory, which I hope will include a commitment to actively engaging in regional trouble spots affected by terrorism and to neutralizing the world's most dangerous terrorist, Saddam Hussein."

In his speech, Bush clearly hoped to cash in on his astronomically high poll numbers, and the spirit of post-Sept. 11 unity, to help pass his controversial domestic proposals. But emboldened by the Enron scandal, the waning of wartime patriotism and polls that show voters differ significantly from the GOP on economic issues, Democrats no longer regard the president as politically untouchable as midterm elections approach.

In outlining his domestic priorities -- which included accelerating the tax cuts passed last year and making them permanent, pushing the administration's controversial energy plan and passing an economic stimulus package -- the president praised Congress for its ability to work in a bipartisan fashion in the past and called upon it to show "the same spirit of cooperation we've applied to our war against terrorism." But beneath the veneer of bipartisanship, it was clear that Bush understands that times have changed. Though the president promised big spikes in spending on the military and homeland security, he laid down the gauntlet, warning Congress against frivolous spending.

"To achieve these great national objectives -- to win the war, protect the homeland and revitalize our economy -- our budget will run a deficit that will be small and short-term so long as Congress restrains spending and acts in a fiscally responsible way."

In his reaction to the speech, House Minority Leader Richard Gephardt, D-Mo., wanted to focus attention on the upcoming battles over domestic policy. "We know that real security depends not just on justice abroad, but creating good jobs at home; not just on securing our borders, but strengthening Social Security and Medicare at home; not just on bringing governments together, but creating a government here at home that lives within its means, cuts wasteful spending and invests in the future," he said.

Just as they did in September, Democrats began their comments Tuesday night with an almost perfunctory pledge of unity on all things related to the war on terrorism (although that pledge would almost certainly break apart if Bush dramatically expanded the war) but then proceeded to take the president to task for his new policy proposals.

In a statement released after the speech, the Democratic National Committee said, "While the Democratic Party stands 100 percent with our president in the war on terrorism, there is growing concern that he is not addressing the domestic issues that affect working families, like creating jobs; protecting Social Security and Medicare; passing a real Patients' Bill of Rights; enacting a real prescription drug benefit; and protecting workers' pensions from employer mismanagement."

"We are united in the war against terrorism," echoed Rep. Brad Sherman, D-Calif. "Unfortunately, the president's tax policy will drive up the deficit -- it is the same policy that Republicans were proposing last July."

Both parties' bipartisan posturings notwithstanding, a knockdown, drag-out fight is clearly looming in Congress.