The state of the other union

Clinton gives liberal fans an alternative view: Tough on terror, bullish on foreign aid -- and sharp on why the right hates him so. 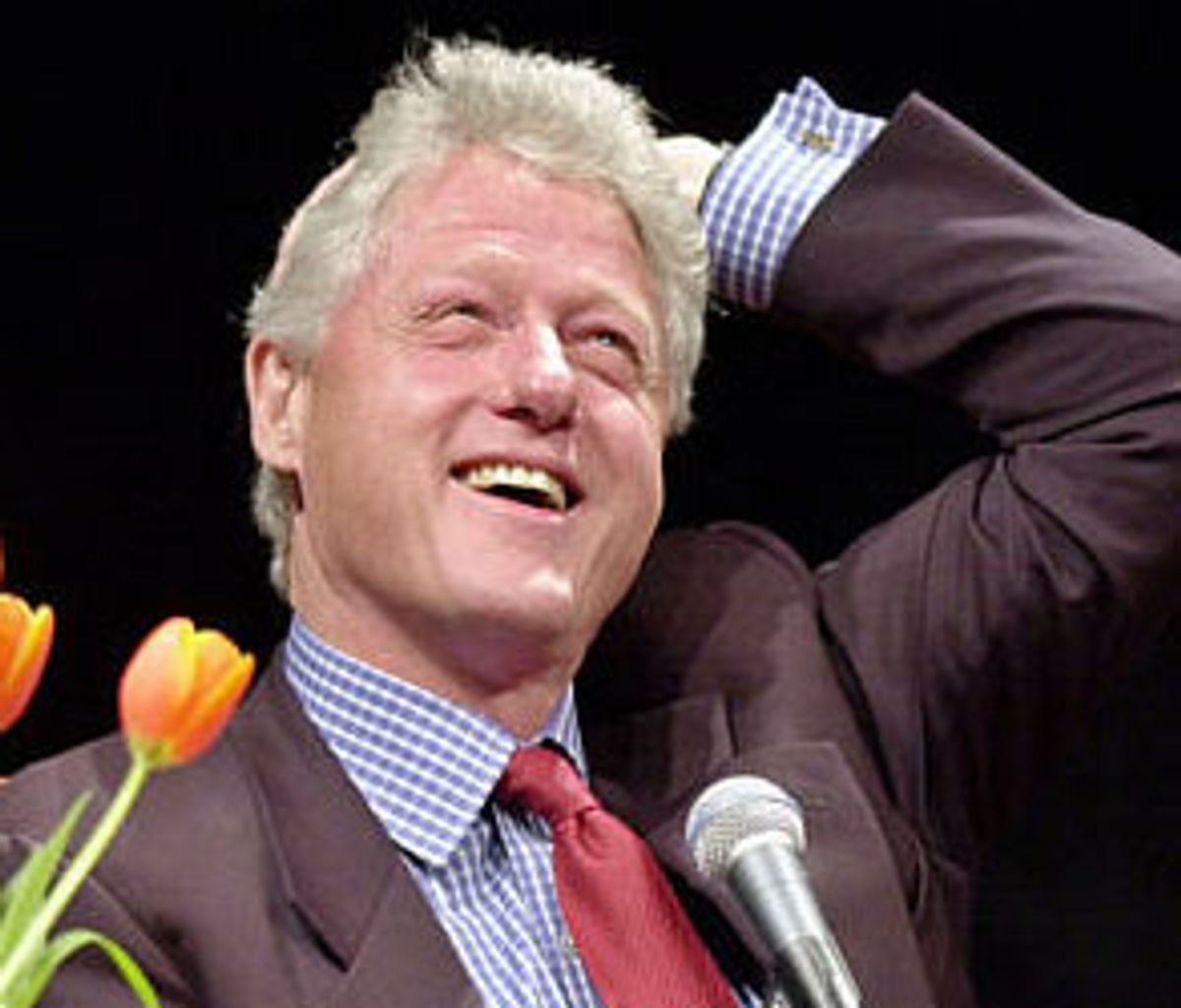 Even in wartime, the legitimacy of the Bush presidency rankles in liberal Berkeley, Calif., which gave more than three-quarters of its votes last November to Vice President Al Gore. So it was a happy accident that on the day President Bush readied his first State of the Union address, who showed up in Berkeley but former President Clinton, to give what felt like a State of the Union speech for disenfranchised Blue state voters.

Blue states, you'll recall, went for Gore, while the Red states were Bush country. There were more of us than there were Bush voters in the last election, but it's unseemly to dwell on that, this being wartime. Many things are unseemly now: Watching the actual State of the Union speech Tuesday night, it was tempting to propose a drinking game that would involve downing a shot every time President Bush said the word "evil" -- at least five times -- but is post-irony America ready for presidential drinking games?

Berkeley is. Berkeley is ready for President Bush drinking games and Noelle Bush Xanax jokes; Berkeley is ready to reelect President Clinton. His speech at the University of California at Berkeley was the hottest ticket locally; graying boomers swarmed the campus. Outside Zellerbach Hall, writer Anne Lamott was spoofing Joan Rivers' pre-Oscar celebrity watching, pointing out famous lefties and liberals -- film director Philip Kaufman, writer Amy Tan, every local left-of-center politico past and present. When Clinton strode on stage his trademark hour or so behind schedule, the crowd surged forward and women began screaming, "We love you, Bill!" It was Ollie North's worst nightmare.

Clinton spoke for more than an hour without notes. (Later, the contrast with the teleprompter-dependent Bush, whose odd ticks and smirks distract from even his better turns of phrase, was painful -- but we're not supposed to dwell on that, either.) There was little to incite Clinton's enemies, though they don't need much. He voiced support for the war in Afghanistan early and often, but he took his pronouncements about the root causes of terror a little further than he has before.

Despite a decade-long economic boom that brought poverty in the U.S. to its lowest level in a generation, Clinton noted, a quarter of the world doesn't have clean drinking water, and a billion people live on less than $1 a day. The Sept. 11 attack illuminated "the dark side of globalization," he said, the backlash of people who saw New York's World Trade Center as "a corrupt symbol of greed and power."

So along with the war against terror, Clinton urged the U.S. to commit to a program of global development, to reduce poverty and spread education, noting that the U.S. spends a smaller percentage of its income on foreign aid than other wealthy Western countries. He touted his relatively little-known program of debt relief for poor nations -- ultimately backed by U2's Bono, Jesse Helms and the pope -- which forgave billions in debt to the West in exchange for governments committing the same amount to health, education and economic development. Already Uganda doubled the number of kids attending elementary school thanks to the program, Clinton said, and Honduras will soon do the same. And he urged Bush to contribute the roughly $2.2 billion U.N. Secretary General Kofi Annan is asking for the Global AIDS Fund -- which is only a little more, he noted, than the war in Afghanistan is costing every month.

At times Clinton sounded more like Ralph Nader than Al Gore, arguing for "sustainable development" (though he admitted the term "might as well be Aramaic" to most Americans) and for fighting global warming. It's hard not to think he'll please the left more as an ex-president than when he was the charming triangulator-in-chief. He mostly resisted criticizing the Bush administration, though he couldn't resist a jab at its battle to keep its energy task force records secret. "I'm still trying to figure out the difference between what went on with our healthcare task force, and what went on with the energy task force. There must be one, but I'm too dumb to get it."

But he got the biggest applause when U.C. Journalism School dean Orville Schell asked, "Why does the right wing despise you so?"

"Because I won," he replied. The crowd cheered and laughed, but Clinton wasn't laughing. "They thought there would never be a Democratic president again. They'd found the formula to turn us into cardboard, make us un-American ... to turn Mike Dukakis into a guy who wouldn't care if his wife was raped.

"I got no honeymoon, no nothing. They felt, 'We should never have lost the White House. It was ours!'" By contrast, he said, Democrats "don't hate people when they beat us because we've gotten so used to losing." He urged Congress to use the Enron scandal as a prod to pass real campaign finance reform, but both parties had to back it, because "unilateral disarmament" would hurt Democrats.

It was hard not to dwell on the difference between the scripted and simplistic Bush -- who deserves credit for ably prosecuting the war, but can't adequately explain the global forces that led to it -- and the intelligent and spontaneous Clinton, with his global vision as well as his scary grasp of arcane details. Discussing energy conservation, he shared an anecdote about a federally assisted housing development in California that was supposed to save 40 percent in energy costs -- but it ultimately saved 65 percent! He rattled off how many new jobs were created during his administration (22 million) and how many more students got college-tuition aid (10 million).

Then it was time to go. The crowd was on its feet again, the first few rows pressing forward to shake his hand. There was strange, smoky jazz-club music as people milled to the exits. It was a little more than an hour until the actual State of the Union address. But nobody seemed in a rush to go home and turn on the TV. Clinton wasn't, either -- he made his way across the stage, shaking every outstretched hand, and when he got to the end, he started to work his way back across. Then a Secret Service agent nudged him, and he reluctantly edged away.

Bill Clinton State Of The Union