Nicole Kidman isn't bad as a Russian bride in this noirish sex comedy, but her feeble costar could use a good tug. 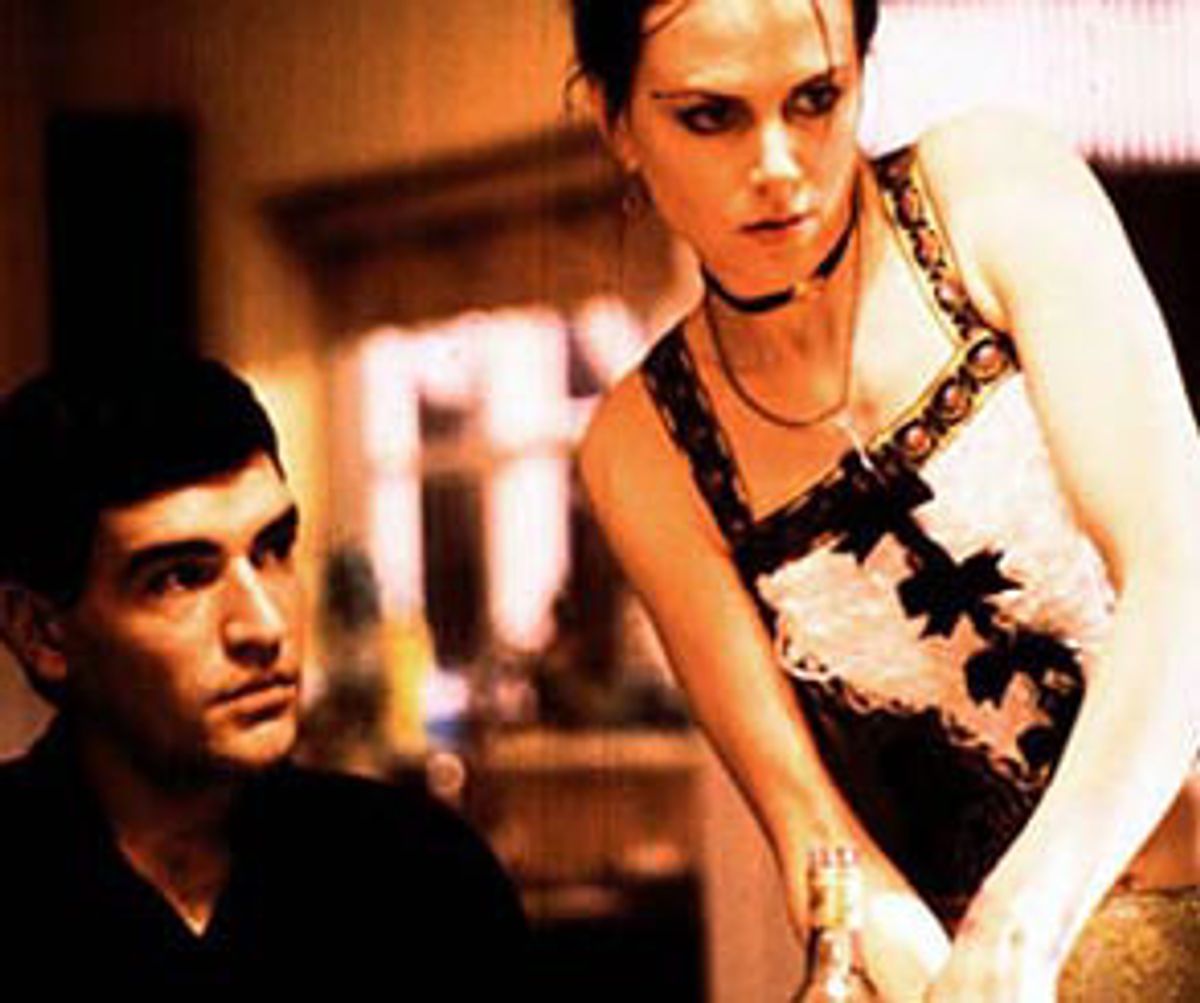 When a movie presents a hero who starts out as a wimp, there has to come a definite point when he shows some backbone. At the end of "Birthday Girl," Ben Chaplin gets to stand up to the bad guys and show that he can't be kicked around, but that's not the kind of backbone I'm talking about. We should see that he's capable of responding to some other being than himself, that his neat, ordered existence -- no matter how safe -- is a paltry thing next to the glory (or even the heartache) of love and sex and romance.

The transformation is all-important in a romantic drama where the hero is called on to sacrifice his security for the love of a woman. Think of the moment in "Something Wild" where Melanie Griffith tells Jeff Daniels to enjoy their wild weekend because on Monday, he'll return to his office job and his house in the suburbs. Later in the movie, when we see Daniels' house -- including pictures of the wife and kids who've left him, a lone Barcalounger surrounded by empty McDonald's wrappers -- we understand just how empty his life is. But well before that, it's the shine in Daniels' eye, the combination of ardor and reckless courage that tells you he's not about to give up the chance to feel alive.

It's that sense of ardor that's missing from Ben Chaplin's performance in "Birthday Girl." Chaplin plays John Buckingham, a bank clerk who has managed 10 years of bloodless competence on the job and who could probably stay in the same position until he retired. The swift opening scenes play John's friendless, dull life for neat (but not cruel) comedy. When he goes to the airport to pick up Nadia (Nicole Kidman), the Russian bride he's ordered over the Internet, the director, Jez Butterworth, includes a shot of a group of sad, solitary punters anxiously awaiting their own Russian mates.

Nadia turns out not to speak any English, and John is so busy making frantic (unreturned) calls to the agency to tell them that they need to take Nadia back that he doesn't register that he's got a real looker in his little house. He reacts to her overtures with a look of flustered embarrassment.

It's easy to spot the sources that Butterworth, who wrote the script with his brother Tom (another Butterworth brother, Stephen, was a producer), borrows from: principally screwball comedy, and Cornell Woolrich's wonderfully florid pulp novel "Waltz Into Darkness" (which has been filmed by Truffaut as "Mississippi Mermaid" and as last year's "Original Sin"). Butterworth has some talent for the comedy of everyday routine, particularly in the scene of John receiving his annual respectably tepid job evaluation. But when one of Nadia's Russian buddies (the French actor-director Matthieu Kassovitz) shows up at John's place with a pal (Vincent Cassel) in tow, Butterworth can't manage the tone shift necessary to move the picture from comedy to noir.

Kidman's Nadia, like the femme fatale of the Woolrich novel, is, as a pulp novel would say, not what she seems. The intrusion of the two Russians interrupts what has become John and Nadia's cozy idyll. But for the movie to work past that point, we have to sense that Nadia really has fallen for John. The two seem to be quite compatible in bed (though Butterworth cheats by never making it clear -- apart from one scene where she's in charge -- how much Nadia enjoys indulging John's bondage fantasies), but you never sense what Nadia sees in this rather dull young man.

And Chaplin's response to crisis doesn't exactly answer the question. You wait for John to get over his feelings of betrayal so the movie can move into the next phase. But terrible as that betrayal is, Chaplin just sulks in the manner of a wounded adolescent. His motivations are opaque and his actions silly. He has an opportunity to call the police before things get out of hand, and yet he doesn't take it. And later, when he does go to a police station with Nadia in tow for the purpose of turning her in, he learns something that makes him change his mind -- something that should increase his sympathy for her. But there's no softening on Chaplin's part, just more peevishness.

If the filmmakers had set out to show how men (particularly inexperienced men) often revert to adolescent behavior in matters of love and sex, the movie might have played as dark comedy. But John is meant to be the hero, and he's too puny a character to earn our respect or our sympathy. We're saddled with a leading man who's too self-absorbed to grow past his hurt feelings. And by the time he does get to act with some courage and generosity, it's too late.

None of this does much to bring out Nicole Kidman. She's not bad. She handles her Russian accent well (though accents, which people invariably latch onto to prove the worth of a performance, are really inconsequential in the overall scheme of things), and she looks both alluring and untrustworthy with dark hair and the hard, watchful look in her eyes. But it's not the role I would have wished for her after the twin victories of "Moulin Rouge" and "The Others" (where she did one of the hardest things for an actor to do: sustain a performance of steadily mounting hysteria without becoming shrill or showy).

Nadia is a noir tootsie as conceived by a writer-director who doesn't have much sensuality, can't relish her dark side and who just can't muster the material (or the costar) for Kidman to do one of those turns that make performances like Gloria Grahame's in "The Big Heat" or Jane Greer's in "Out of the Past" so affecting. There's perhaps a decent noir lurking around somewhere in "Birthday Girl," and perhaps a comedy of sexual frustration as well. But watching Ben Chaplin slog from one bad situation to the next just makes you think that if he'd had a good wank, it would have been a hell of a lot easier for everyone involved.