Wake up and smell the subterfuge

What does it mean when a bank tells us to stop worrying about money? A trick! 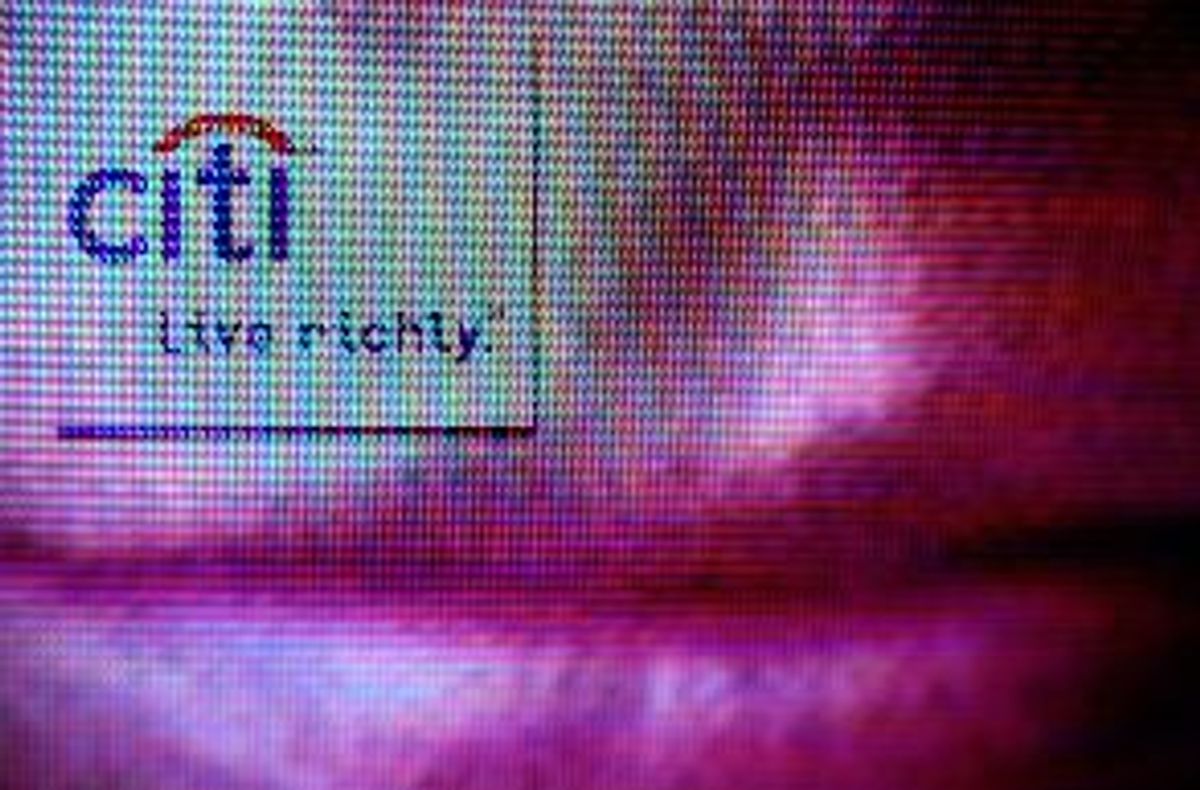 Sometimes waking up and smelling the roses has nothing to do with waking up. Or smelling. Or roses.

It's a financial statement, not a scorecard.

Collecting interest does not count as a hobby.

If you live in New York, you have encountered these epigrams on billboards countless times over the past year. They constitute an ad campaign rife with postmodern irony: We must be constantly reminded by one of the largest financial institutions in the world not to worry so much about money. Citibank, or Citigroup as it fashions itself nowadays, doesn't want us to worry about money; it just wants us to "live richly," as the tag line of its ads implores.

If the effectiveness of an ad is measured by its ability to grab and hold the attention of the consumer, this particular campaign was an unqualified success, at least judging by its effect on me. The smallish blue type set against a stark white background drew me in -- it is a startling look of studied understatement in the visual cacophony of midtown. Even over the course of the last few months, as screaming headlines in the New York Post vied for my eyes, the ads reached me. I always took a moment to ponder the advice to "live richly."

I first saw the billboards last summer, when the NASDAQ was in its deepest swoon. At the time, I was adjusting to a rapidly diminishing sense of financial well-being, and the ads' message seemed easy enough to grasp. "It's a financial statement, not a scorecard." Here, indeed, was a helpful reminder not to fret so much about my 401K plan. Surely there are much more important things in life.

Then after Sept. 11, the billboards assumed a new resonance. In the wake of so much loss and grief, the Citigroup campaign seemed to become even more a part of the national zeitgeist: The ads echoed the dominant message from our political leaders and pundits, who attempted to articulate our yearning, in the face of tragedy, for more spiritual value in our lives.

The accent on things intangible already had solid purchase in advertisements for the world of retail -- Zen clothes, mood-matched makeup, herbal everything. But with sudden urgency we were called upon to reject the material and embrace the ethereal, giving the Citibank ads uncanny relevance. It was almost as if the company's ad agency had anticipated this unforeseeable turn in our lives. And as I walked to the subway each morning last fall, I found myself wondering if somehow -- perhaps with Citigroup's help -- I might, someday, wake up and smell the roses.

Finally, as the fog of despair began to lift, I came to my senses and saw the billboards clearly. I woke up and smelled something, though it wasn't what the copywriters had in mind. The weak, the rushed, the gullible among us are supposed to find these ads refreshing and instructive -- like pearls of wisdom from Friedrich Nietzsche or Jenny Holzer, rather than from Sandy Weill. But the creators of this campaign did not aspire to provide us with moral guidance. Their words were carefully chosen to press the imperatives of Citigroup's brand positioning, which, you must admit, have a lot to do with money -- counting it, saving it and lending it to people who think they need more of it to be happy.

This is, of course, a campaign built on a crucial assumption about consumer psychology that is cynical, diabolical and effective: Telling consumers not to worry about money is Madison Avenue's way of reminding us that we are, indeed, very worried about money, or that we should be. It's all summed up in the ambiguity of the tag line. "Live richly" manages to sound both genuine and arch at the same time, teasing us with the notion that even if we pretend to think otherwise, we remain obsessed with our personal wealth all the same. "Live" is good, certainly better than the alternative. "Richly" is the perfect counterpoise. We can hear the promise of the adjective speaking through the adverb, even while we try to tamp down our more unrealistic expectations for untold riches.

Previous to this bold experiment in reverse psychology, banks have been content to prey on our anxiety in a more straightforward fashion, positioning themselves as dependable and rock-solid in a world of uncertainty. Remember that great line: "When her needs are financial, her reaction is Chemical"? Citibank, too, once sold itself simply as a vigilant and fiscally sound protector against our worst financial fears: "The Citi Never Sleeps." Now, the gloves are off -- and the mask is on.

Do Citibank executives begin their morning management meetings holding hands and brainstorming ways to bring more spiritual value into the world? When the credit committee meets to review the adequacy of the bank's loan loss reserve in light of Enron and Global Crossing, do they shrug their shoulders blithely and say, "Hey, it's just a balance sheet"? Or are they simply exhorting us to stop worrying about money in the hope of avoiding our further scrutiny? I'll give you three guesses, and the first two don't count.

And what about those of us -- many of us at the moment -- who are in frightening financial limbo, or homeless, or jobless, wondering where our next dollar will come from and how we will stretch it to survive? These exhortations to live richly have got to be irritating, if not rage inducing, when interpreted through the lens of financial fear.

The obscenity of the Citigroup ads rests in what is concealed rather than revealed. It is a trick! But we are vulnerable, more so now, perhaps, than ever. Are we also so morally and intellectually depleted that we will eagerly accept a pseudo-moral philosophy from a bank? I hope not. But Citigroup is banking on it.

Joseph Lamport is a writer in New York City.