Was President Bush abducted by aliens?

When Dubya had his close encounter of the pretzel kind, did he in fact take a trip far, far away? 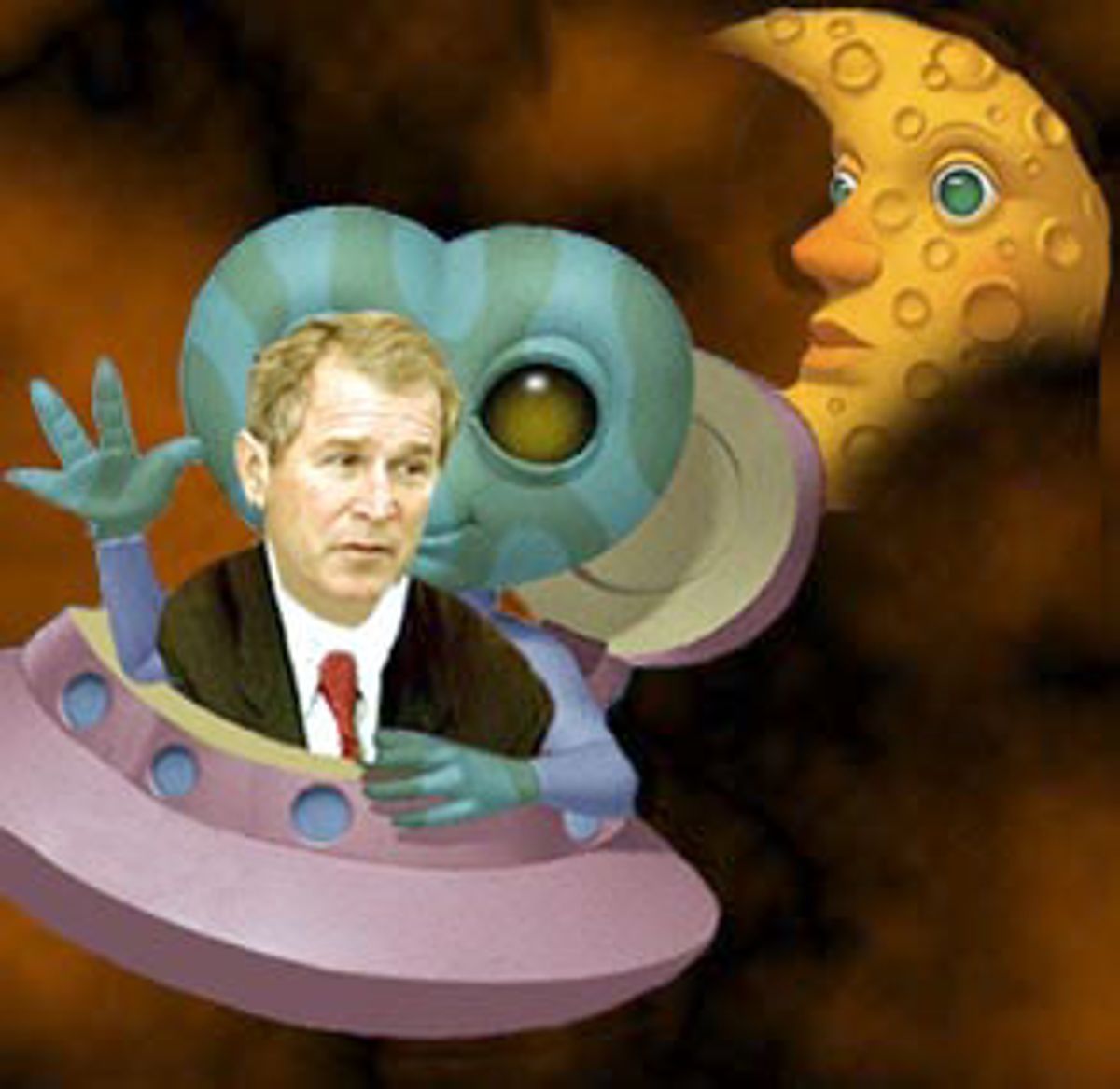 I'm no political scientist, but I do have a slow resting heartbeat.

KPCC, the Southern California public radio station, revealed last week that President Bush's Jan. 13 fainting episode had less to do with a pretzel than with a heart arrhythmia called sinus bradycardia. Sinus bradycardia is any heart rate slower than 60 beats per minute; we know from a Jan. 14 Los Angeles Times article that the president's ticker clocks in at around 34-45. The pretzel was still a key player, but only insofar as the gagging slowed the president's heart rate even further, via stimulation of the vagus nerve. Medically, bradycardia is nothing to worry about and I wouldn't bring the whole thing up if it weren't for the alien abduction thing -- it seems to have happened to both me and our president. But more on that later.

There's a fun, if not consistently credible, tradition of interpreting the behavior of American presidents through scraps of medical information; of gaining access to their hearts and minds literally through their hearts and minds, as well as their livers, lungs, colons and kidneys. FDR's polio, Reagan's Alzheimer's and Dubya's former drinking habits have all generated lively speculation over the years -- in what ways might these conditions have actually shaped history? Napoleon's hemorrhoids, after all, famously helped him lose Waterloo, the pain having delayed his attack until noon, when weather and military conditions favored the British.

Paul Wolf, clinical professor of pathology at the University of California and V.A. Medical Centers in San Diego, studies the impact of illness on creative geniuses and, recently, political leaders. Roosevelt's hypertension, Wolf has written, played a decisive role at Yalta, allowing Churchill and Stalin to take advantage of the president.

"At the conference, Roosevelt's cerebral arteriosclerosis and reno-vascular hypertension and cardiac cachexia certainly affected his judgment, leading to the imposition of communism in Eastern Europe and Asia," Dr. Wolf says.

A subset of this approach to deciphering presidential history is the sympathetic sufferer method: Like Kennedy, I have Addison's disease, some writer might announce, and can therefore add another wrinkle to our understanding of JFK. It's this tactic I employ with our current president, thanks to a slow heartbeat and an extra-terrestrial conspiracy.

As health quirks go, low heart rate is one of the duller things that can show up on a world leader's medical file; at first glance, it's hard to imagine how KPCC's report will get us any deeper into the president. If anything, bradycardia is generally associated with good health -- it's not uncommon among athletes -- and good health doesn't turn the tables at Waterloo. Occasionally bradycardia causes trouble for women giving birth, but Bush is not a woman. Fainting is the main concern for men, and even fainting's not so bad if you can take the jokes and avoid hitting your head.

Me, I hit my head. It was the one time in my life my slow heart rate came to my attention, and I succumbed to the highly unmasculine activity of fainting. It happened Super Bowl Sunday, 1997. I remember because the game was boring me to tears, and I'd gotten up to pace around my friends' apartment. The EMT later guessed that I'd stood up too quickly. I recall standing in the bathroom and observing myself in the mirror above the sink. I can see my heart beating through my T-shirt, I thought. Next I was on the tiles, staring at the ceiling.

Except my eyes were closed. The ceiling I was looking at wasn't nearly as interesting as the walls on either side of me, which went to the floor in panels of lights and flashing buttons. I was lying in some sort of corridor. The corridor emptied out into a larger room about 25 feet south of me. I had the impression something interesting was happening in that room -- Murmurs? Negotiations? -- but my eyes opened before I could learn more. I inspected some grout, then got up and told my friends what happened.

At this point, instead of actually suggesting that aliens are actively abducting human beings with slow heartbeats during postseason football games, I will simply list other seemingly implausible scenarios from history: the fall of the Roman Empire, the invention of the light bulb, the Big Bang. I rest my case; well, not quite.

Reading any further requires a suspension of disbelief, but logic still applies: If there is intelligent life out there somewhere -- and I'll defer to Carl Sagan on that one -- any scenario seems equally likely. Said life could be microscopic worms crawling around beneath Jupiter's outer crust. Or it could be brilliant and elusive, and given to the very abduction proclivities with which Hollywood has filled cineplexes.

I propose that the president and I share something: a few mysterious moments elsewhere in the cosmos, born of a little Sunday afternoon arrhythmia. But did they beam us aboard their ship once they knew we'd fainted, or was the fainting just a symptom of the beaming process, which actually began pre-pretzel, pre-bathroom? Or perhaps we've been lying in spaceship corridors all our lives, "Matrix"-like, and it was only in those moments of putative unconsciousness that the mirage fell away and our true circumstances were revealed.

Waking up on the floor is odd enough without an alien abduction to complicate things. It must be why comas are such a popular soap opera trope -- the idea of time elapsing without your knowledge is strangely unnerving. Add a spaceship and it's enough to have you phoning the National Enquirer.

Or calling for an end to softness in America.

Or dispatching troops to the Philippines.

Or smirking for just a half second in the State of the Union speech.

None of Bush's post-pretzel behavior suggests anything out of the ordinary, necessarily, but of course one never knows what might have been. Proceeding under the assumption that the president, like me, had a close encounter that Sunday afternoon in front of the football game, it's conceivable that subtle ideas took hold as a result, and will one day play out in significant ways. We could guess how: Maybe he'll start making mashed potato sculptures at dinner, or maybe he'll bomb Iraq. But according to the far-fetched premise of this exercise, the unimaginable is what's operative here, and therefore any conjecture is necessarily barking up the wrong tree.

At some point in childhood, the possibility occurs to us that everything in the world has been surreptitiously arranged for the sole purpose of fooling us; that our family, friends, teachers and neighbors are simply actors participating in the most elaborate social experiment conceivable. The thrill of this possibility isn't just the narcissistic fantasy that the world revolves around one person -- it's also the pleasure of imagining the sheer improbability of it all.

In that vein, I submit that there's something useful in the unlikely idea that our president might have been visited. It harks back to a time of divine rule -- our leader, of all people, has been tapped -- and it lends him an air of distinction. What's more, who can spend time on a spaceship without later looking inward? Edgar Mitchell, the sixth astronaut to walk on the moon, experienced a profound spiritual transformation during his trip. Could it be that enlightenment now lurks behind Bush's historically vacant gaze? Does he chew on something big, late at night, when the Cabinet has gone home? We'll never know, but it's something to think about.

Me, I didn't change after my vision. If enlightenment came, it lingers in a part of my head where I don't go. I still leave the cap off the toothpaste, and I still lose my house key every few months. I even still scoff at stories of UFO sightings, those lonely, disproportionately Midwestern sagas of hovering disks and little green men, though some days my slow-beating heart isn't quite in it.