Elephantine military budgets, feed-the-rich tax cuts, ballooning deficits! Democrats charge that Bush is trying to revive those glorious days of Reaganomics. But do they have they guts to fight him? 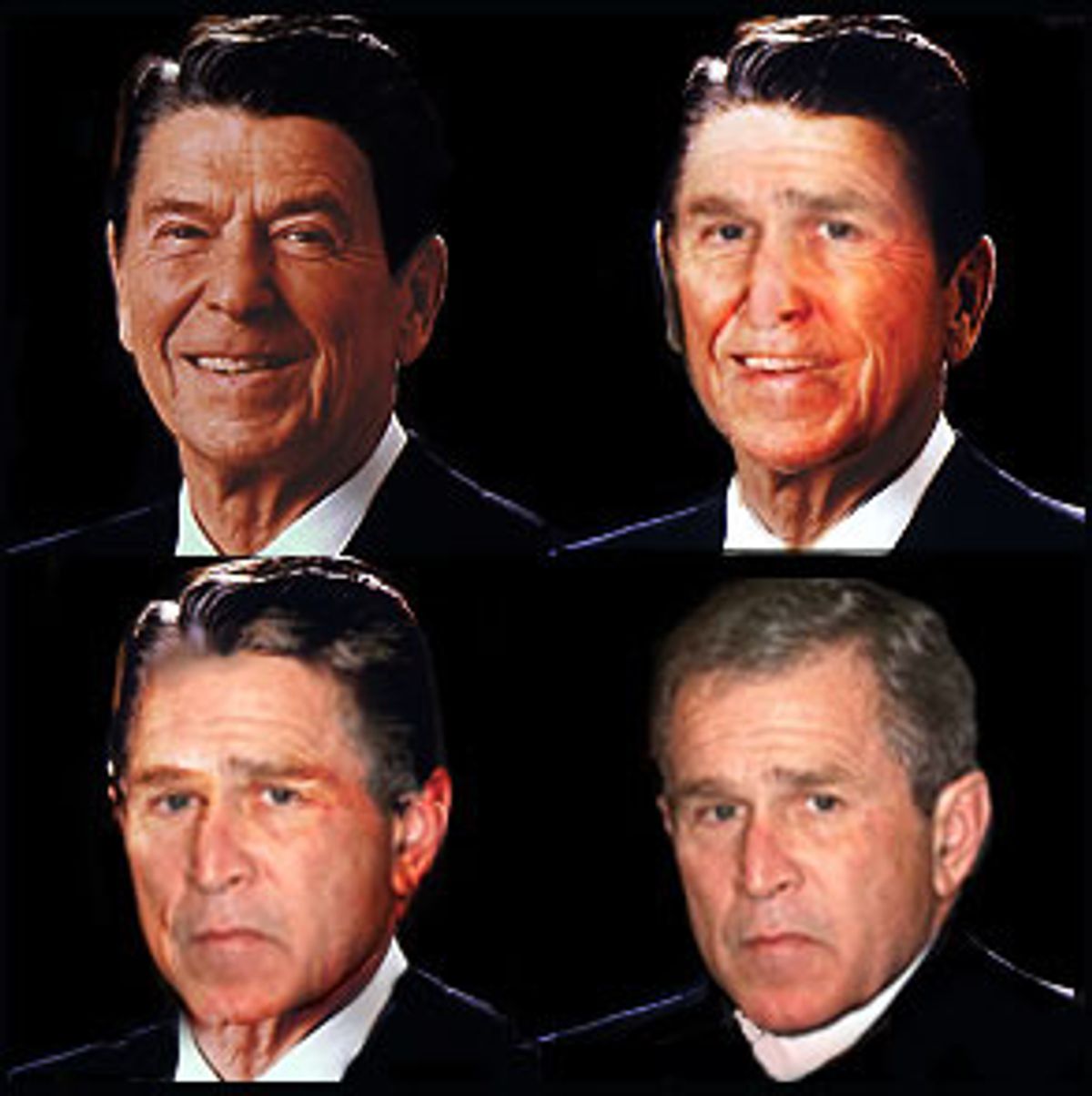 The tax cut proposal unveiled by the Bush White House Monday is as bold and aggressive politically as its military assault on Afghanistan last October -- and the administration seems to be counting on Democrats to fold as quickly as the Taliban.

The political chutzpah of the Bush budget plan is dazzling: The White House is admitting that it will return the nation to the days of budget deficits -- briefly, it insists -- as well as break a campaign pledge to leave the Social Security and Medicare surpluses intact, all to bankroll nearly $2 trillion in tax cuts over the next 10 years that will give more than 40 percent of their benefits to the wealthiest 1 percent of U.S. households.

The $1.35 trillion tax cut package signed into law last year was scheduled to be phased in over the decade, and expire over time. But Bush's new budget seeks to make those cuts permanent, and phase them in more quickly. The accelerated timeline would cost the federal government an additional $175 billion over the next three years. Bush's new budget also contains an additional $591 billion in new tax cuts. Even in the short term, the resulting red ink will be significant: The $2.13 trillion budget sent to Capitol Hill Monday forecasts a $106 billion deficit this year and an $80 billion shortfall in the 2003 fiscal year. Congressional watchdogs say the real deficits could be much higher.

With the nation struggling with a recession as well as a war effort requiring new military spending, and with national polls showing voters prefer protecting Social Security to tax cuts, Democrats would seem to have an ideal environment for making a spirited counterattack against the tax cuts, one that would have a strong chance of victory. But there's no evidence yet that they'll mount a united front against tax cut fever.

So far, the Democratic response has taken three forms: Attack the budget on the grounds it eats up the Social Security surplus, try to out-saber-rattle the Republicans and claim it threatens the military, and -- the minority response to date -- attack the budget-busting tax cut itself, for putting the nation's social spending needs in jeopardy.

To date, the populist response isn't coming from the Democratic leadership. Only a month ago, Senate Majority Leader Tom Daschle, D-S.D., seemed ready for a full frontal assault on the Bush tax cuts, in a fiery speech to the Center for National Policy Jan. 4. "Unfortunately, last spring, Republicans chose exactly the wrong solution. They made a huge tax cut their No. 1 priority -- ahead of everything else -- and discarded the framework of fiscal responsibility," Daschle said then. "Sept. 11 and the war aren't the only reasons the surplus is nearly gone. They're not even the biggest reasons. The biggest reason is the tax cut. At a time when we need to fight both a war and a recession, when our nation has urgent needs on all fronts, the tax cut has taken away our flexibility and left us with only two choices, both of them bad."

Bush struck back quickly, accusing Daschle and the Democrats of returning to their tax-and-spend roots. "There's going to be people who say, we can't have the tax cut go through anymore," Bush said. "That's a tax raise. And I challenge their economics, when they say raising taxes will help the country recover. Not over my dead body will they raise your taxes."

The rebuke seemed to work, on Daschle anyway. Now the majority leader has returned to the tried and true Democratic strategy of defending the Social Security surplus, with no mention of the Robin Hood in reverse dynamic of the budget's tax cuts.

"The dramatic fiscal decline of the past several months suggests that we need a plan to strengthen our economic security as well," Daschle said Monday. "We need a plan that will keep our commitments to Social Security and Medicare without making deep cuts in benefits, shortchanging our other national priorities or running deficits. Unfortunately, the budget the administration submitted is not that plan."

Sen. Joe Lieberman, D-Conn., thinks the best way to attack the Bush plan is to argue it could undermine the defense budget. "On further review, this budget appears to fall short in important ways -- the price to be paid, it seems, for the president's tax cut," Lieberman -- like Daschle, a potential 2004 presidential candidate -- said in a statement Monday. "In fact, the president's proposed $35 billion [military budget] increase dwindles substantially when you factor in inflation, critically important pay raises mandated by Congress and owed to our troops, necessary improvements to military health, and other obligations we must meet. What's left over is less than $10 billion, which is not nearly enough to meet the military's essential needs for procurement and transformation."

It's been left to Sen. Ted Kennedy, D-Mass., to attack the tax cut for its own sake, as a gift to the very wealthy that undermines the economic recovery and stalls needed new programs Bush himself has backed.

Kennedy spokeswoman Stephanie Cutter admits most Democrats are unlikely to be as aggressive as her boss is on the tax cut issue.

"I think people are hesitant to challenge the tax cuts that have already passed. Clearly, we don't have the resources to meet our priority needs. His budget does not provide enough to put in place a prescription drug program, doesn't provide funds to implement the education reform bill. If we can't find funds for these priorities, additional tax cuts are not responsible. I think people will be more vocal about the new ones."

Although some Democrats will try to paint the Bush proposal as the return of Reaganomics, the budget outlined by the White House is actually more politically savvy than the social-service-slashing plans of the early 1980s.

But the big winner, of course, is the Pentagon. The administration has gone back to the Reagan-era formula of large tax cuts, sharp increases in defense spending, and multibillion dollar deficits. The president's $2.13 trillion budget calls for a 12 percent increase on national defense, and sets aside an additional $10 billion as a "war reserve," which the president can spend on defense if necessary. It also calls for a $9 billion increase in domestic security spending.

Democrats are already quarreling with the budget numbers. They say a prescription drug plan will cost at least $300 billion, and Lieberman, at least, questions the administration's math on defense spending. They also insist the budget lacks the money to implement the bipartisan education reform bill Congress passed late last year. Among the other cuts in the Bush budget are $1.55 billion for class-size reduction programs, as well as money to hire more teachers and renovate school buildings; a $9.1 billion reduction in funding for national transportation projects and cuts of more than $400 million in funds for public housing.

The question for Democrats is whether to nickel-and-dime Bush in budget negotiations, or attack the budget's priorities head-on. After Sept. 11, many pollsters and strategists say, the public is looking to government to do more, not less. The recession is particularly worrisome to voters: The economy replaced terrorism as the top challenge facing the U.S. in December, according to opinion polls, and the Bush budget does not appear to have registered that political sea change.

Pollster John Zogby says that whether the Democrats attack the Bush tax cut plan explicitly, it is at the heart of the coming budget fight on Capitol Hill. "Again, what we're seeing is this ideological chasm that is Washington. For Republicans, it's all tax cuts, all the time. It's a plan always in search of a rationale," he says. "Where they have a problem is very simple. After Sept. 11, there has been a significant renewal in faith in government. Translated, that not only means 'Win the war,' but 'Get us out of this recession, and while you're at it, we've got some problems that need to be fixed.' So folks are expecting money to be spent, especially if there's going to be a deficit again."

A recent Gallup poll shows the public is fairly divided over whether Bush's tax cut plan is the right remedy for the ailing economy. When asked whether the budget should focus money on new tax cuts or increased government spending "on such things as benefits for recently unemployed workers and construction projects," 41 percent of the respondents called for tax cuts, while 46 percent called for more domestic spending.

A Los Angeles Times poll released Tuesday found that while Bush remains enormously popular, with approval ratings at 80 percent, 80 percent of those surveyed also said they would rather cancel later stages of the Bush tax cut than tap the Social Security surplus.

So clearly the Bush budget takes a political risk by doing the opposite. During the campaign, Bush pledged to dedicate the so-called Social Security surplus to debt reduction. But Bush's new budget spends that $2 trillion in Medicare and Social Security surpluses on general budget expenses rather than setting it in a "lockbox" marked for reducing the national debt. (Apparently, the White House has not updated its Web site since the budget was released. Click on the administration's description of its Social Security policy,and you'll find this quote from the president: "We're going to keep the promise of Social Security and keep the government from raiding the Social Security surplus.")

With the tax cut set at exactly $2 trillion, the same amount as the Social Security and Medicare surpluses, it might look like the president is borrowing from those popular programs to reward his wealthy friends. But Democratic leaders, afraid to be labeled tax-and-spenders, remain timid in their criticism of the administration's tax plans.

Meanwhile, at every turn, Republicans are using Sept. 11 as the primary justification for the Bush budget priorities. "The reason we have a deficit in this budget is to protect the lives of Americans," said White House Budget Director Mitchell Daniels in his testimony before the Senate Budget Committee.

Daniels said Bush was committed to paying down the national debt as soon as possible. "It's just that at this moment in our history there are a couple of things even more important -- defeating terror, protecting Americans in their homeland and getting the economy back on track."

Nussle later explained how a budget with a deficit could be described as balanced, saying, "It does equal a temporary deficit budget, but one that we can deal with, I think, in a very responsible way."