In "The Lessons of Terror," Caleb Carr argues that terrorism never succeeds. If only we could believe him. 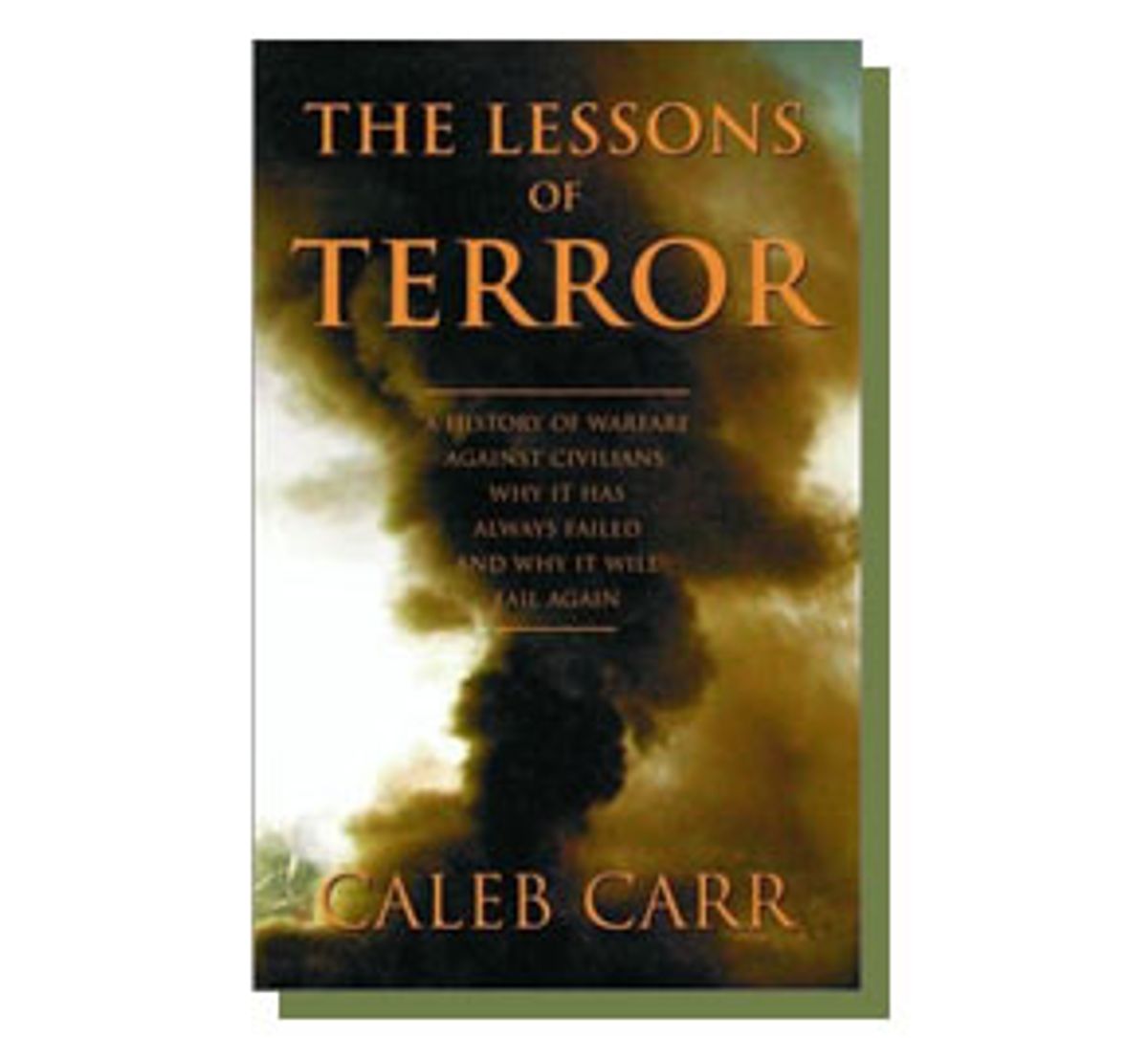 Now that the first, purposeful flush of adrenaline has worn off, the war on terrorism has gotten awfully murky. For example, who, exactly, is our opponent -- "the evil one" or an "axis of evil"? How do we fight this protean enemy and how will we know when we've won? Is deposing the Taliban enough or do we need to meddle in the affairs of other nations as we're nation-building in Afghanistan? Should we pull out all the stops to whack Osama bin Laden, or is he merely one head of a beast that will grow nine more as soon as we decapitate it?

Talk about the fog of war -- but here comes Caleb Carr, military historian turned bestselling novelist, to clear things up. His "The Lessons of Terror" is a beefed-up version of an essay about terrorism that ran in World Policy Journal six years ago, and in 274 sparsely printed pages he explains it all to you. The book has an enviable firmness of tone and authoritative manner, yet it's general and sweeping enough to stir faint suspicions that things couldn't possibly be this simple. And, somehow, when you try to apply Carr's forceful dictums to the situation at hand, they tend to become as slippery and elusive as a handful of live minnows.

One thing is absolutely certain: Carr considers us to be at war. The primary assertion of his 1996 World Policy Journal essay is that terrorists ought to be treated as members of an army and not like a bunch of criminals. While some have argued that bin Laden ought to be captured and tried in court, Carr says it's time that we regarded his followers and other international terrorists as "what they have in fact been for almost half a century: organized, highly trained, hugely destructive paramilitary units that were and are conducting offensive campaigns against a variety of nations and social systems." Not that Carr is a priori against the capture and trial model where bin Laden is concerned -- he admires the U.S.'s 1989 invasion of Panama and how efficiently it went about "nullifying" Panamanian dictator General Manuel Noriega, for example. And it's not that he thinks we should offer the captives at Guantanamo Bay "the same rights that uniformed combatants enjoy under the various Geneva protocols." No, dammit, the important thing is that we understand that we're at war.

Why is it so important that we embrace what some of Carr's critics (before Sept. 11) called "the war paradigm"? Because, it seems, once we accept that we are at war, then we will understand that "military history alone can teach us the lessons that will solve the dilemma of modern terrorism," and Carr is the military historian to supply that instruction. Of course, what we might also realize is that to a hammer everything looks like a nail, but to be fair that doesn't necessarily invalidate what Carr has to say in "The Lessons of Terror."

Laid down early on and reiterated constantly throughout the book is Carr's definition of terrorism itself: "warfare deliberately waged against civilians with the purpose of destroying their will to support either leaders or policies that the agents of such violence find objectionable." Moreover, terrorism is not some frightening new manifestation of global strife, but "the expression of a constant theme in military history." And with a certified military historian to lead us by the hand through 2000-plus years of armed conflict, we will see clearly and unquestioningly that "the strategy of terror is a spectacularly failed one."

Carr argues that "warfare against civilians, whether inspired by hatred, revenge, greed, or political and psychological insecurity, has been one of the most ultimately self-defeating tactics in all military history." But while in Carr's view military action is the only appropriate response to terrorism, "the nature of that military action is as important as its undertaking ... warfare against civilians must never be answered in kind."

Whereupon Carr launches into a centuries-spanning survey of Western warfare, in theory and practice, with the occasional detour into Asia, Africa and Latin America, all arrayed to demonstrate his ideas. He begins with Rome, whose early success he links to its inclusive attitude toward its conquered peoples. The new subjects, even the slaves, could become citizens eventually, a policy that Carr calls "the central domestic foundation on which the near millennium of Roman hegemony rested."

However, if when they were good the Romans were quite good, when they were bad, alas, they were as bad as anybody else. Carr sees the empire declining when it employed brutal scorched-earth policies in seizing and holding its provinces, proving that "when waged without provocation [warfare against civilians] usually brings on retaliation in kind, and when turned to for retaliatory purposes it only perpetuates a cycle of revenge and outrage." Not only that, but the barbarian soldiers recruited into the Roman army to fill spots left empty by shirking young Romans had a tendency to turn on their rulers, demonstrating a martial truism the U.S. forgot, to its sorrow, with Afghanistan's mujahedin: the proxy who fights for you today will fight against you tomorrow.

The rest of the history of warfare in the West and its outskirts, according to Carr, is a litany of savage, bloodthirsty "destructive war" occasionally brightened by a few great military minds who understood the superior quality of "progressive war." His heroes include, above all, King Frederick II of Prussia, but also Sir Francis Drake and Oliver Cromwell (except when it came to Ireland). These men, Carr asserts, understood that "wars were best fought for particular and realistic political goals by soldiers whose restrained behavior would limit the impact of conflict on civilians and thereby maintain or even win those citizens' loyalty." (Rigorously strict military discipline was essential to prevent soldiers from slipping into the "barbarization" of rape and plunder.) This same strategy, Carr maintains, must be used against modern international terrorism.

Though many idealists will welcome this insistence on "limited" rather than "total" war, Carr makes it clear that his advocacy of protection of civilians from armed conflict is based on sheer pragmatism. His is a quintessentially Hobbesian view; people will support the regime that best ensures "the safety of ordinary citizens by establishing a professional, politically disinterested and highly disciplined army." Break from that guideline and sooner or later some consequence of your mistake will jump up and bite you on the ass and your empire will fall apart. Hence, "terrorism" always eventually fails.

While this is a reassuring scenario, it turns out to be tricky to apply both to history and to our current crisis, despite the fact that "The Lessons of Terror" seems specifically intended to do so. If "terrorism" consists only of attacks on civilians, then what do we call al-Qaida's early actions in Saudi Arabia or the 2000 bombing of the USS Cole in Yemen, all of which selected military targets? Did the group only become "terrorists" when they bombed two American embassies in Africa in 1998? It's also difficult to compare the attacks of Sept. 11 with the oppression inflicted by occupying Roman armies in Germania or Louis XIV's brutal creation of a cordon sanitaire on France's frontiers in the 17th century, both of which Carr characterizes as "tactics of terror."

First of all, an attacking army doesn't conceal its identity or its goals. In the case of the Sept. 11 attacks, the ultimate culprits and their motives remain facts we can only infer. Second, ruthless imperial armies force their opponents to choose between fighting back, perhaps to the death, and a life of subjugation that might be even worse than death. Islamist terrorists confront Americans with a choice between living under the constant threat of sudden violence and such alternatives as pulling U.S. troops out of Saudi Arabia or ending aid to the secular government of Egypt, foreign policy commitments most Americans were probably unaware of to begin with. Most of the other contemporary terrorist situations Carr touches on -- in such places as Israel and Ireland -- involve far more intimate and tangled relations between attackers and victims. (On the explosive subject of Palestinian-Israeli violence, Carr blames both sides. He sees the region's bloody history as deriving from the fact that Israel was founded with the use of terror -- he cites the bombing of the King David Hotel in the waning days of the British Mandate by Jewish terrorists -- but blames the Palestinians, too, for perpetuating the cycle of violence.)

Furthermore, Carr's recommended response to the threat is to opt for "preemptive military offensives aimed at making not only terrorists but the states that harbor, supply, and otherwise assist them experience the same perpetual insecurity that they attempt to make their victims feel." And yet, while "war can only be answered with war," we must avoid any actions or policies that punish civilians. Carr advocates the abolition of the CIA, which he sees as bearing "an uncomfortable resemblance to an organ of state terror" and as "focusing enormous amounts of attention and funds on covert operations, while missing calls on larger, truly vital world developments" and just generally failing at its putative mission of gathering intelligence. He thinks the kind of military action required is best performed by new unmanned aircraft like the RQ-1A Predator and highly trained special operations forces who can strike surgically, but he disdains long-range air strikes.

Exactly who, though, should we sic these formidable assets on if we want to slap down al-Qaida? We can't find most of the group's members, and no one seems to know which, if any, states are sponsoring them. Rich Saudis are said to have funded anti-American Islamist militants for years, but we can no more bomb our ally Saudi Arabia than the British can bomb us because some Irish-Americans send money and guns to the IRA.

Carr's unpredictable opinions make "The Lessons of Terror" a provocative read -- he may hate the CIA, but he likes Donald Rumsfeld; he condemns America for historically pursuing a bloodthirsty strategy of "senseless battles of attrition" in most of its wars, but says that Native Americans first set that tone with "their own vicious techniques of destructive war." But in the end, the confidence with which he teaches his lessons seems premature.

Exceptions to Carr's rules tend to creep into the reader's mind, undermining the whole enterprise, even when he takes the trouble to refute them. For example, the U.S. strategic bombing of Japan during World War II, both conventional and nuclear, intentionally killed huge numbers of civilians, yet Japan continues to be one of America's most valued allies. Carr claims that the exceptional generosity that the victors of that war showed toward the defeated nations was an example of "unprecedented decency" that drew both Germany and Japan back into the "community of constructive, civilized nations" and "undid a great deal of the cruel stupidity of the Allied civilian-bombing campaigns." But rather than supporting the idea that "terrorism" as Carr defines it always backfires, this suggests that whatever damage may be done by brutal military tactics can then be undone by political means. The war was won, after all, and so was the peace, and, as much as I'd like to believe otherwise, the amount of civilian carnage involved doesn't seem to have affected either that much.

Thinking hard about "The Lessons of Terror" tends to lead the reader into this sort of cul de sac. Perhaps that's an inevitable hazard when very, very general principles are so forcefully asserted. It would be comforting to believe that somebody somewhere understands absolutely, positively how to handle terrorism, but I suspect that we're better off listening to the kind of experts who grasp that they, like the rest of us, are still learning.