Art from the city that would become Tokyo shows a 17th and 18th century world of pleasure that was sexual, theatrical, discreet and elegant. 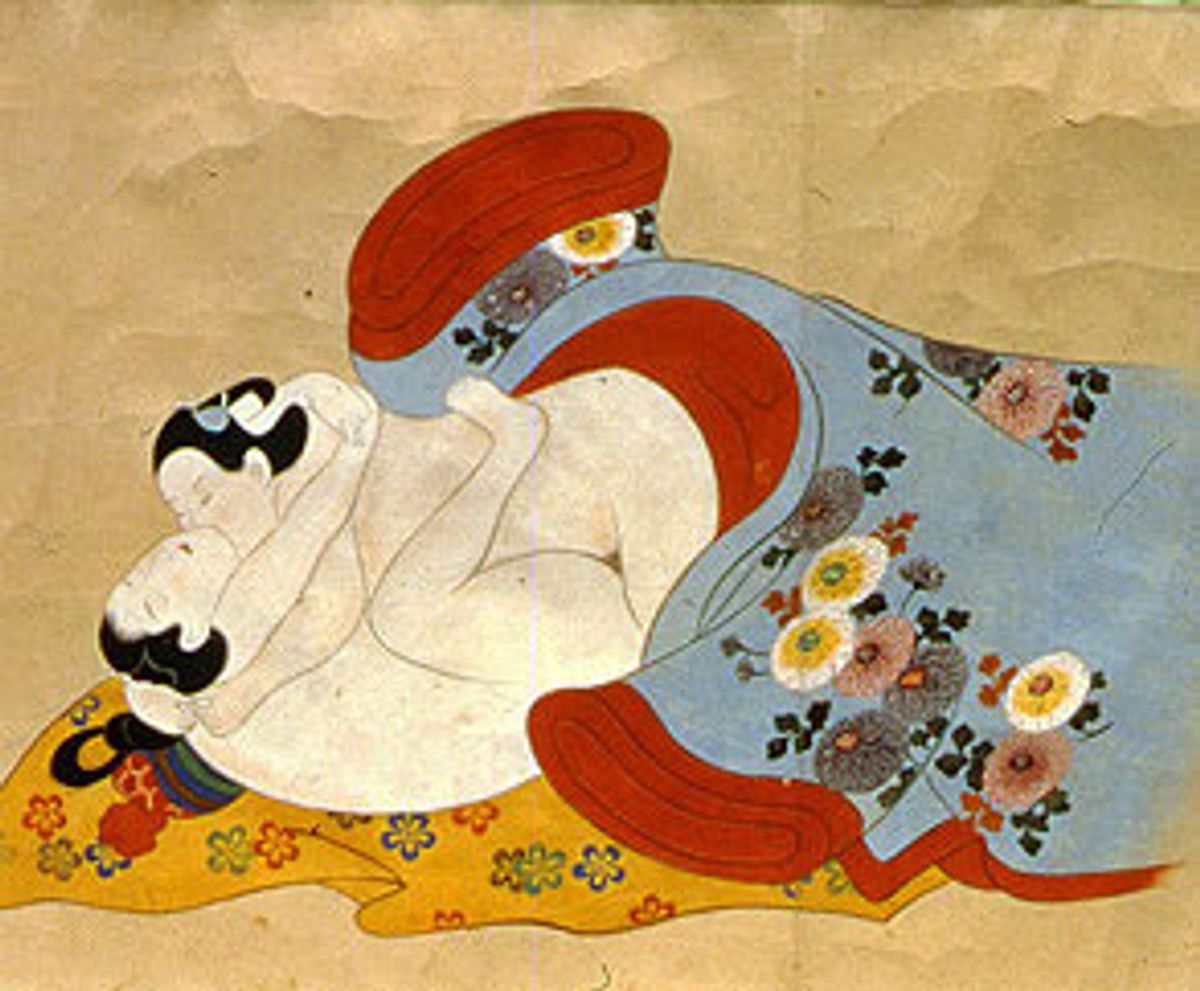 There aren't many sexy cities around these days. There might be sex -- in the privacy of urban bedrooms or the subsensual tensions of the office space and the cocktail bar -- but the widespread devotion to commerce and consumption leaves little space for serious desire. In some ways "Sex and the City" has got it right -- people talking about relationships and sex as themes, as issues -- but for a city scene that has as its driving force sexual pleasure, you'd probably have to go looking in the steamier corners of the world's sex tourism cities: Bangkok, Salvador de Bahia, Manila. But in these base, boozy, business-only places you'd be foolish to expect cultured madames and enlightened socializing.

You could expect such things in Japan in the 17th and 18th centuries. Its capital Edo (modern-day Tokyo) embraced a culture that managed to balance the necessary mercantile needs of society with a vision of a transient "floating world" (ukiyo) devoted to pleasure-seeking -- in particular the theater and the whorehouse. The artistic expression of this is in a current exhibit titled "The Dawn of the Floating World" (ukiyo-e), a group of prints, paintings and books from 1650-1765 by a small number of outstanding artists and schools. Just over 140 pieces from the Boston Museum of Fine Art's famed collection of ukiyo-e works are being shown for the first time outside that city (some for the first time ever) at London's Royal Academy (through Feb. 17).

The city these artists depict must have been a hedonistic delight -- for men at least. Imagine a vibrant city in which daily life is a combination of animated conversation, relaxing music plucked on the banjolike shamisen and clever songs, cups of tea and sex, all delivered by beautiful women. The courtesans' main purpose in life was to please and entertain and perfect these services. In between sessions they were before the mirror whitening their faces, blackening their teeth and shaving their napes -- all the time hiding the fact that such labors were fatiguing. Unlike the geishas, who emerged in the late 18th century and were never officially prostitutes, these "floating world" women plied their trade openly.

A large folding screen of the Yoshiwara pleasure quarter by Hishikawa Moronobu is an example of an artistic depiction of sex as business. A strict hierarchy pertained in the brothels, as in society, and only a few of the several thousand working women became rich. The best had acolytes who watched them to learn the trade, earning very little once they began selling their bodies, even though virgins (fake or genuine) were expensive for the customer.

The pleasures of Edo were not solely physical. The wealthy townsman class of merchants and artisans in the Shogunate wanted a life of general satisfaction, and when not checking out the offerings at the assignation teahouses, they were at the Nakamura Kabuki theater. Many of the prints are of warriors and actors whose parody of Chinese folklore were key elements of the floating world culture. When not in bed, the new rich were laughing at high culture.

It's clear that Kabuki influenced courtship and fine art. A convention for portraying beautiful women was to show them in the "looking back" pose ("mikaeri" in Japanese), their heads diverted from the direction in which they were walking. Employed daily on catwalks and on fashion magazine covers, this affectation points up the importance of deportment and display. Elsewhere women are combing their hair, bathing, flirting, standing tall on "fuck-me" block heels -- their hips jutting out -- and most are wearing beautiful, sometimes ostentatiously long robes. A ritualistic, formal air hangs over all the scenes as if sexuality and theatricality were one and the same. Artists like Okumura Masanobu also employed the tricks of stagecraft in their compositions -- most effectively in the pillar pictures, which crop the sides off the image to suggest the viewer is peeking voyeuristically through a door left ajar.

From 1650 to 1765 color began appearing in the artworks of Edo -- but even where hand-drawn tints enliven clothing and landscapes, skin is always milky white. Martin Amis has pointed out that white is the quintessential color of porn; black, he maintains, is amateurish, obvious. Of course, as a Western writer, he is talking about white underwear, white lace, the white of brides. In 18th century Edo, whiteness was one of the ways courtesans were appraised. The ukiyo-e images exploit the theme in suggestive images of women's bodies packaged in ostentatious robes. In one, an accompanying poem tells us: "As the tie cords/gradually unravel/skin like snow!"

But how do these prints and paintings work for us now? Going to the Royal Academy to see the Edo pictures involves an imaginative leap. As well as the obvious challenge of seeing art removed in time and hemisphere from present-day, asexual London, the nature of the material complicates the matter. You slide naturally from viewing the city scenes and parodic theatrical cartoons to studying what would now be considered titillating erotica or even pornography. The fact that these works predate full-color printing means that for the modern eye they can lack a necessary ruddiness, and the curving lines and subtle details may not stir the right hormones. Perspective had only recently been imported from China and the West, and there is an inevitable flatness to the cartoon-like scenes. It's hard to find eroticism in one dimension.

But watching the London crowd studying the prints carefully and nosing right up to the surfaces to catch the details, it seems there is something intriguing about the floating world. It may well be the aesthetic-erotic effect of three rooms decked out in flimsy paper prints, sensual whorls, flowing lines and perfect contours. In a contemporary media-filled society where everything supposedly sexual is in your face and energized by the flash gun, the almost abstract patterns of Edo erotica have a certain appeal. That so much urban foreplay took place in a country most Britons associate with POW camps, electronics and workaholism is an education in itself.

Some might argue that window shopping along the streets of the red light districts of The Hague or Amsterdam is the modern version of the floating life. What this exhibition asserts, above all, is that in Edo money, fashion, laughter and sex were part of the same daily continuum, with nothing in common with a stag weekend for desperate males. From the popular manga comics to van Gogh and Degas, the floating world has influenced our culture, and even in Europe, occasional periods of bohemian creativity have revived its ethos. But right now in London, while you can still get a shag and a good-looking companion in exchange for a wad of money, Edo is a reminder that sex can be discreet, elegant and thoughtful.

Chris Moss is a freelance writer based in London. He has written for the Guardian, the Independent, Time Out and other UK media.