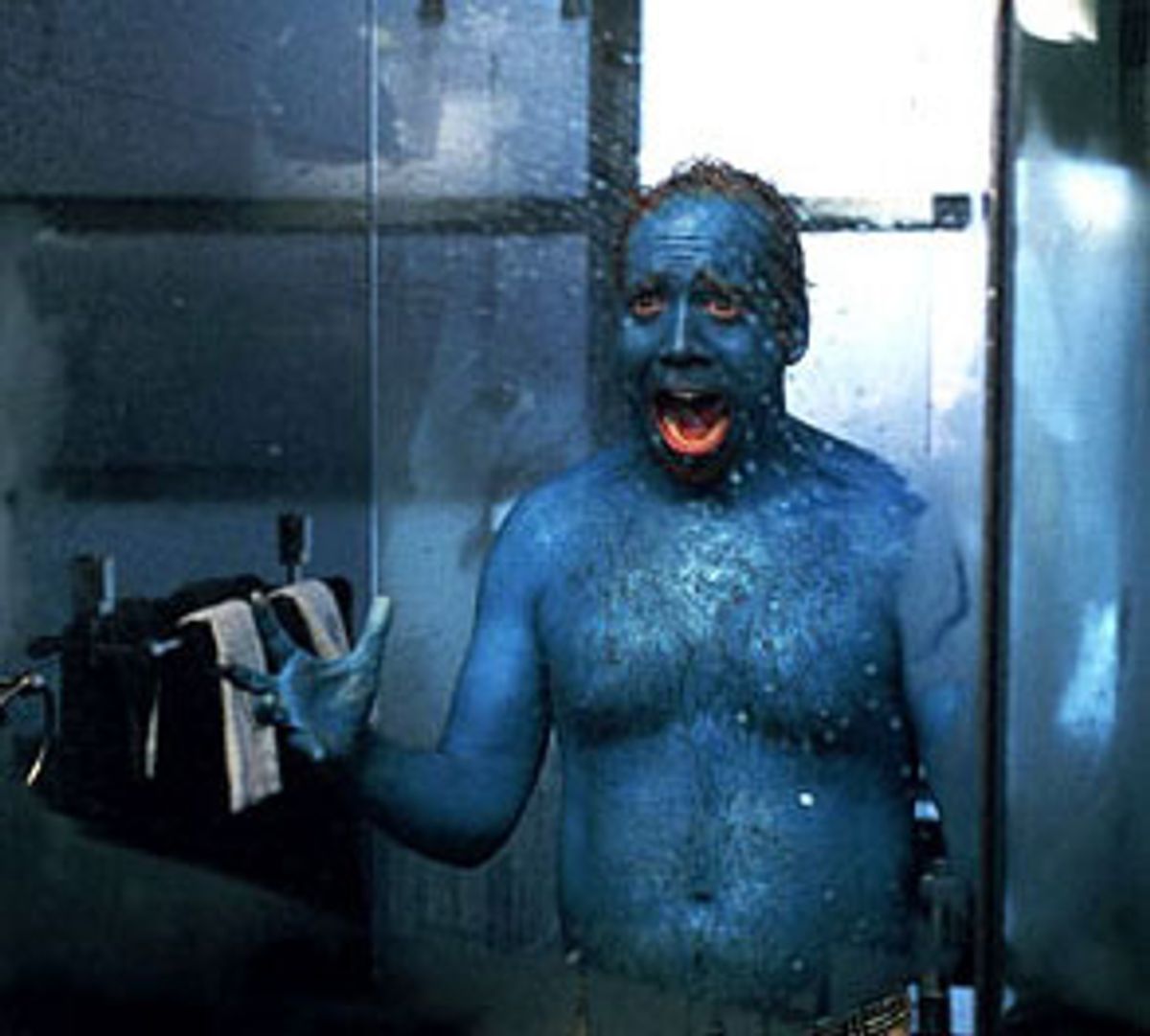 "Big Fat Liar" reveals its weaknesses and strengths just five minutes into the film with an elaborate, well-schemed fabrication. Fourteen-year-old Jason Shepherd has told his teacher that he couldn't do his homework because he spent the night by his father's hospital bedside. Mrs. Caldwell squints her disapproval and Jason passes on his father's phone number. She leaves to make the call, and, of course, Jason's cell phone rings a second later. While his awestruck class looks on, he impersonates deathly ill Dad.

The good news is that Jason -- played by Frankie Muniz, aka the title character from the Fox sitcom "Malcolm in the Middle" -- captures the moment perfectly. He paces, disguises his voice and gesticulates with just the right mix of teenage bravado and fear of getting caught. The bad news is that the setup and surrounding details fail to give the acting enough comic punch. It's hard not to notice, for example, that a pack of eighth-graders wouldn't stay quiet in a teacherless classroom. Teenagers are rowdy and wired on hormones. Capturing their craziness would have made the scene more believable and increased the tension; it might have made Shepherd's lying tenser, funnier, more compelling.

"Big Fat Liar" is full of such not-quite-fatal oversights. An attempted mix between "Ferris Bueller's Day Off" and "Home Alone," the movie never pushes its pranks far enough to reach laugh-out-loud success and never gives its actors enough comedic support. There are a handful of mildly humorous scenes and some great costumes. The actors -- particularly Paul Giamatti as evil Hollywood producer Marty Wolf -- stand out. But director Shawn Levy, at the helm of his first feature, never moves beyond the stars. The story (written by Dan Schneider, creator of several Nickelodeon TV shows) feels airy and loose, like an hour-long episode stretched into a movie, and Levy never sufficiently tightens it. The average 10-year-old probably won't notice such flaws, but a media-savvy 14-year-old will likely file "Big Fat Liar" under the title of "not great, but not bad."

The plot, like most of the movie, offers few surprises. After he's outed for lying about his sick father, Jason buckles down and completes his homework assignment, writing a portly version of the Pinocchio tale, about a "Big Fat Liar" who gets bigger with every lie he tells. But the suddenly reformed "Jase" never manages to drop off the assignment because he and his bike collide with Wolf's limousine. Giamatti's hotshot studio executive -- a Grinch-ified version of Buddy Ackerman, the cold, cruel producer in "Swimming With Sharks" -- agrees to give Jason a ride, then steals the story and turns it into a movie.

Jason's parents don't believe this seemingly tall tale, so when they go out of town, he and his friend Kaylee (Amanda Bynes) fly to Los Angeles. They sneak onto the Universal Studios lot, flitting through an impressive, psychedelic array of costumed actors, and confront Wolf in his office. Jason simply wants Wolf to call his father and admit that he stole the story. But Wolf refuses, burning the handwritten homework before Jason's very eyes.

So Jason and Kaylee plot revenge. They sneak into the Universal Studios prop and costume warehouse and take up residence. (At times "Big Fat Liar" feels like a shameless feature-length infomercial for Universal's tourist destination.) After taking part in a dress-up medley that should have been far more exciting -- who would choose Victorian dresses and pirate's garb in a room filled with outfits from "E.T." and "Jurassic Park"? -- our youthful heroes collect a basket of weapons and get to work.

The best pranks, which eventually succeed in beating Wolf into submission, occur early. The blue dye in the swimming pool makes for far more humor than one might expect. The same can be said of the gag in which Jason rewires Wolf's car so the horn blows every time he steps on the brake.

Giamatti deserves some credit for the way he handles such silliness. He made a name for himself as a smart supporting actor in comedies like "Man on the Moon" and "Deconstructing Harry," but here he pulls out all the physical stops. He literally throws himself into the role, and when he jiggles his hips to Duran Duran's "Hungry Like the Wolf," it's hard not to appreciate the effort. Bynes, playing Jason's loyal sidekick, also proves a valuable asset. She shines with enthusiasm, particularly in a late scene when she rallies the troops for one final assault against Wolf.

Amusing reappearances from familiar but disappeared stars also add mild satirical bite to the mix. Lee Majors reprises his "Fall Guy" role, skewering Hollywood's youth obsession by enduring a barrage of Wolf's age-related insults. Jaleel White tackles stereotyping, clearly relishing the chance to lash out against a producer -- if only a fictional one -- for casting him in ridiculous roles and treating him like the annoying character he used to play on TV, Steve Urkel from "Family Matters."

Yet, despite its amusing patches, "Big Fat Liar" isn't likely to stick. It lacks the ridiculousness of a "Rat Race" and the edge of a "Ferris Bueller." There are simply too many overlooked details. Some are minor distractions, like the fact that Jason somehow manages to snag Wolf's personal organizer from his desk without creating a diversion, while standing out of reach, in full view of security guards. But others seriously undermine the humor that the movie shoots for.

Jason and Kaylee, for example, are treated like toddlers rather than teenagers. Here we have a pair of 14-year-olds, away from home, living together in a prop room, and there's not a shred of sexuality. The hormones raging through most eighth-graders' bodies have been conveniently deleted by Hollywood magic. This is a shame, not just because a hint of budding libido might have given the characters a bit more credibility, but also because it might have made for a few decent jokes. Jason and Kaylee wouldn't have to get it on, or even kiss. But a scene or two capturing their novel discomfort with puberty might have moved their relationship beyond the confines of a parental pipe dream.

Maybe the lack of sexuality and other not-so-simple realities was intentional. Perhaps Levy and Universal wanted to make nothing more than a good, clean, safe movie, without hormones or complicated eighth-graders. If that was the goal, "Big Fat Liar" generally succeeds. But with just a bit more effort the movie might have been funnier and a lot more fun.