Days before filing for bankruptcy, the scandal-ridden company rewarded some executives with million-dollar bonuses as laid-off workers were denied severance packages. 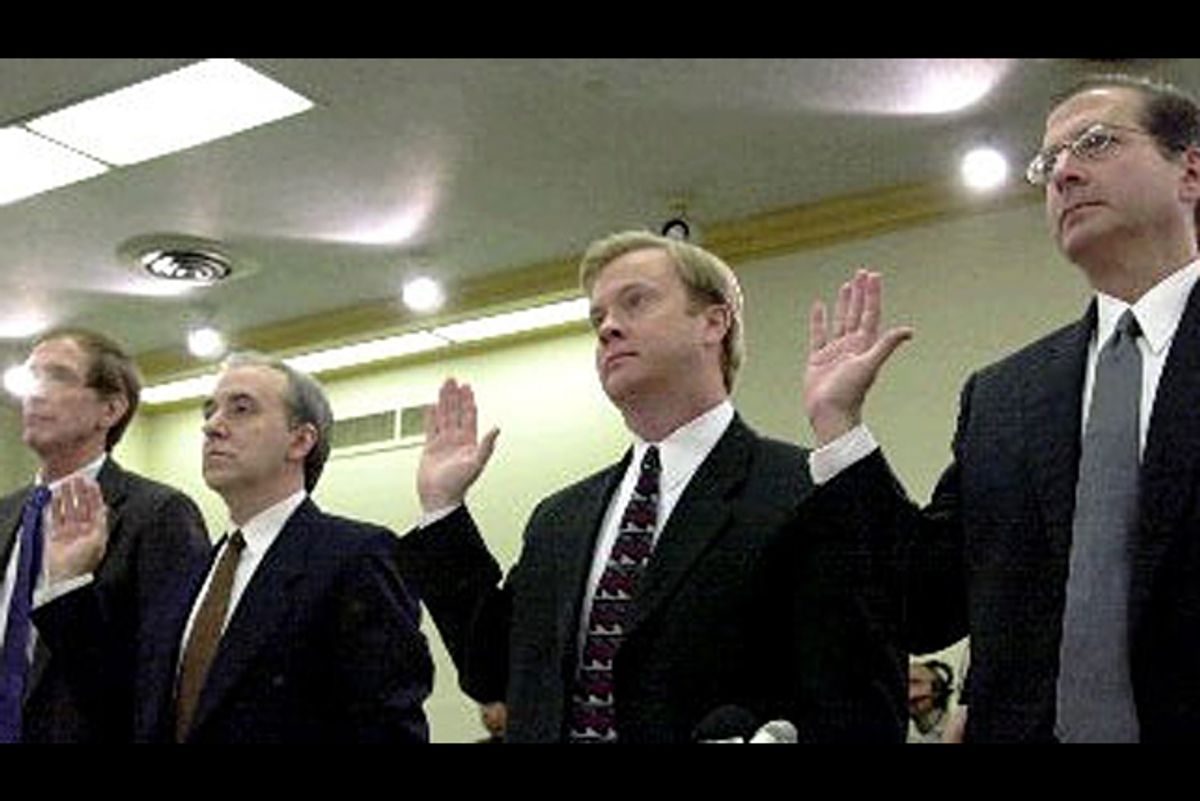 Just days before Enron Corp. declared bankruptcy on Dec. 2, announcing that it would not abide by severance payment promises to laid-off employees, the company gave executives "retention" bonuses totaling more than $55 million, according to an 11-page list obtained by Salon.

While the bonuses have been the subject of rumor and angry comment in and out of the company for some time, Salon is the first news organization to obtain the detailed list. The generous executive payouts, many of which were handed out on Nov. 30, have led some former Enron officials to conclude that the company has yet to abandon its greedy ways. The bonuses were approved by an Enron management team largely still running the company -- Jeff McMahon, then Enron's chief financial officer and now the president, and Ray Bowen, then-treasurer and now CFO. And they were approved after the departure of the "bad guys" who have been hauled before Congress, such as former president and chief executive Jeff Skilling and former chief financial officer Andrew Fastow. McMahon himself received a bonus of $1.5 million and Bowen got $750,000.

Some former managers expressed dismay about the company handsomely rewarding its executives just days before reneging on its employee severance commitment. They also raised questions about the circumstances in which many of the executives received their lavish bonuses. Congressional investigators share these concerns.

During Thursday's House Energy and Commerce Committee hearing on the Enron collapse, Rep. Henry Waxman, D-Calif., asked the chairman of the committee's oversight arm, Rep. Jim Greenwood, R-Pa., to consider subpoenaing Enron for the list of retention bonuses, supposedly used to secure the services of well-performing employees. Combined with an earlier disbursement of $50 million in bonuses to 75 executives who worked on the company's doomed merger with Dynegy Inc., the bonuses are further evidence that Enron was eager to reward those near the top at the expense of the entire company.

"It adds insult to injury," said Sen. Joseph Lieberman, D-Conn., who chairs the Senate Governmental Affairs Committee, earlier in the week. "Enron is still a functioning company. Why they can't find a way to pay the severance really pains me, especially in light of the retention bonuses."

Many of the generous retention bonuses were given to executives who played a role in the fall of Enron's house of cards. At least one of the recipients was faulted in Enron's internal investigation of its collapse, the so-called "Powers Report," named for the chairman of the committee, University of Texas Law School dean William Powers.

The official Enron severance rules state that each eligible ex-employee is entitled to one week of pay for every $10,000 of salary, plus one week of pay for each year or partial year of employment, up to 26 weeks. But the reality has proved to be quite different. Enron employees laid off before Dec. 2 have been told they have no funds coming to them. U.S. Bankruptcy Judge Arthur Gonzalez ruled that the 4,500 Enron employees laid off since bankruptcy were entitled to each receive a $4,500 severance check.

According to one former senior executive, Enron's original severance package -- subsequently scrapped -- cost $120 million and would have provided each employee approximately $30,000 in severance on average. That plan was reduced, then discarded. Instead, at least $105 million was distributed in executive bonuses. "What I'd like to know is why the creditors' committee is letting them get away with this," the former executive asks. "What about this new CEO, Stephen Douglas, doesn't he need that money to operate? This is outright fraud and theft." Another Enron source reports that word inside the company is that members of the creditors' committee received a copy of the executive bonus list earlier in the week "and they are furious."

Two of the Enron executives who testified before Greenwood's subcommittee on Thursday are among those who received the generous gifts -- McMahon, who received $1.5 million, and vice president and general counsel for corporate development Jordan Mintz, who received $200,000.

Enron spokesman Mark Palmer has defended the bonuses as standard operating procedure when a company is trying to retain its talent. The documents show that Palmer's own bonus was $200,000. He did not return a Friday call from Salon.

Relying on an in-house e-mail that broadly described the bonuses, the Houston Chronicle reported in December that 11 Enron executives received one-quarter of the retention bonuses. The e-mail listed McMahon; president and chief executive of Enron Americas John Lavorato, slated for $5 million; chief operating officer of Enron Americas Louise Kitchen, who received $2 million; and president and chief executive of Enron Broadband Services Jim Fallon, who like McMahon received $1.5 million. Approximately 500 employees were included on the bonus list and their rewards ranged from $2,000 to $5 million apiece.

If the company's strategy was indeed to retain these employees, it often failed to achieve its objective. Those who received bonuses agreed to stay with Enron only until the end of February 2002. One former Enron executive reported that "a lot of these people who took the money and signed the contracts have either already left the company -- keeping the money -- or have done nothing but look for and secure their next job when their contract runs out. A number of them have been traveling on Enron's expense accounts negotiating their next job."

John Nowlan, who received a $500,000 retention bonus, has already negotiated a deal to take his crude/products trading team to Transammonia, Inc. Gary Hickerson, who received $600,000 for his "retention," has, according to sources, been working on developing his own private equity fund. Neither Nowlan nor Hickerson returned calls for comment. Based on a conversation with Nowlan's assistant, it wasn't clear that Nowlan still worked at Enron.

Nor did the $5 million bonus that Enron lavished on John Lavorato or the $2 million awarded Louise Kitchen secure their services. Lavorato and Kitchen are following Enron's energy-trading component, Enron Americas, to its new corporate owner, UBS Warburg. Some Enron insiders argue that since Enron Americas was a valuable commodity it could sell, thus helping the firm to stay alive, it was important to keep Lavorato and Kitchen during the transition. But the size of their bonuses has raised eyebrows.

On Thursday McMahon defended the bonuses. "The notion behind the retention payments," he said, "was one that if we were to go into bankruptcy, that these key individuals would remain in the company to protect the businesses' and assets' value for the creditors."

But their performance during Enron's meltdown casts doubt on some of these executives' managerial worth. Mark Haedicke, an attorney with Enron North America, is described in the Powers Report as sitting back and doing nothing when alarms were sounded about the controversial shell partnerships blamed for the company's implosion.

Haedicke and ENA's other senior attorney were warned about the problem in a memo written by employee Stuart Zisman, who stated: "We have discovered that a majority of the investments being introduced into the Raptor Structure are bad ones. This is disconcerting [because] ... it might lead one to believe that the financial books at Enron are being 'cooked' in order to eliminate a drag on earnings that would otherwise occur under fair value accounting."

Zisman then met with Haedicke and the other senior attorney to discuss his concerns. But the two "believed the assertion in Zisman's memo to be untrue, so they did not take any further action," according to the Powers Report. Despite this nonchalance, Haedicke was compensated with $750,000 in bonuses last November. Haedicke is also about to leave Enron to work for UBS.

The Powers Report condemns the breakdown in the company's internal controls, evidenced by the fact that those responsible for making sure executives adhered to ethical standards -- in-house Enron attorneys, Enron's law firm Vinson & Elkins, auditor Arthur Andersen LLP -- obviously did not do so. Things were so bad that attorney Jordan Mintz even went outside the firm to secretly hire outside counsel to take an unbiased look at the shell partnerships, as first reported by Salon.com. In any case, Rex Rogers, the company's deputy general counsel, received a bonus of $375,000. Rogers was the in-house attorney responsible for preparing the disclosure documents for the Securities and Exchange Commission. Enron's SEC documents are one area in particular that has brought harsh criticism from Congress. The documents -- Rogers' work, presumably, though he worked with others at Enron and Vinson & Elkins -- have been slammed for being purposely obfuscating and for not fully disclosing all relevant information.

Another group of lucky bonus recipients raising eyebrows among current and former Enron employees is the team that ran Enron Broadband Services. EBS was one of the biggest money losers for the company and has been criticized as being one of the phoniest of Enron's ventures. It officially died after poor second quarter 2001 reports. This did not stop Enron from awarding EBS's former president and chief executive, Jim Fallon, a $1.5 million bonus. Other former senior executives with EBS were also handsomely rewarded with retention bonuses: Rich Dimichele snagged $800,000; Paul Racicot got $400,000; Stewart Seeligson was handed $350,000, general counsel W. Lance Schuler received $300,000; and Rajeev Thapar was gifted with $250,000.

"People are really upset" about all the money EBS executives were given, said an Enron source.

Reached by phone on Friday, Seeligson wouldn't answer questions about his bonus or even respond when asked what his title was when he was with EBS.

As Salon reported on Jan. 29, Enron attorney Julia Murray cried when she heard that her friend, ex-vice president Kristina Mordaunt, turned a $5,800 investment in one of the shell partnerships into $1 million just a few weeks later. Perhaps some of the sting was taken out for Murray when she received her $200,000 retention bonus.

In Thursday's hearing, Rep. Ed Markey, D-Mass., asked McMahon -- who was chief financial officer at the time -- about the flurry of November retention bonuses and merger bonuses. "As CFO, you would have known that the $100 million was about to be paid out," Markey said. "Did you also know about the imminent bankruptcy at that time?"

McMahon replied that "the retention payments were something that was recommended and approved by the board." McMahon was vague about whether he and other officials knew the company would declare bankruptcy in a matter of hours. "We knew certainly that the bankruptcy was one of several options that could occur," he blandly remarked.