Two untamable steeds in an on-again, off-again affair want to know if they should get hitched and run as a team. 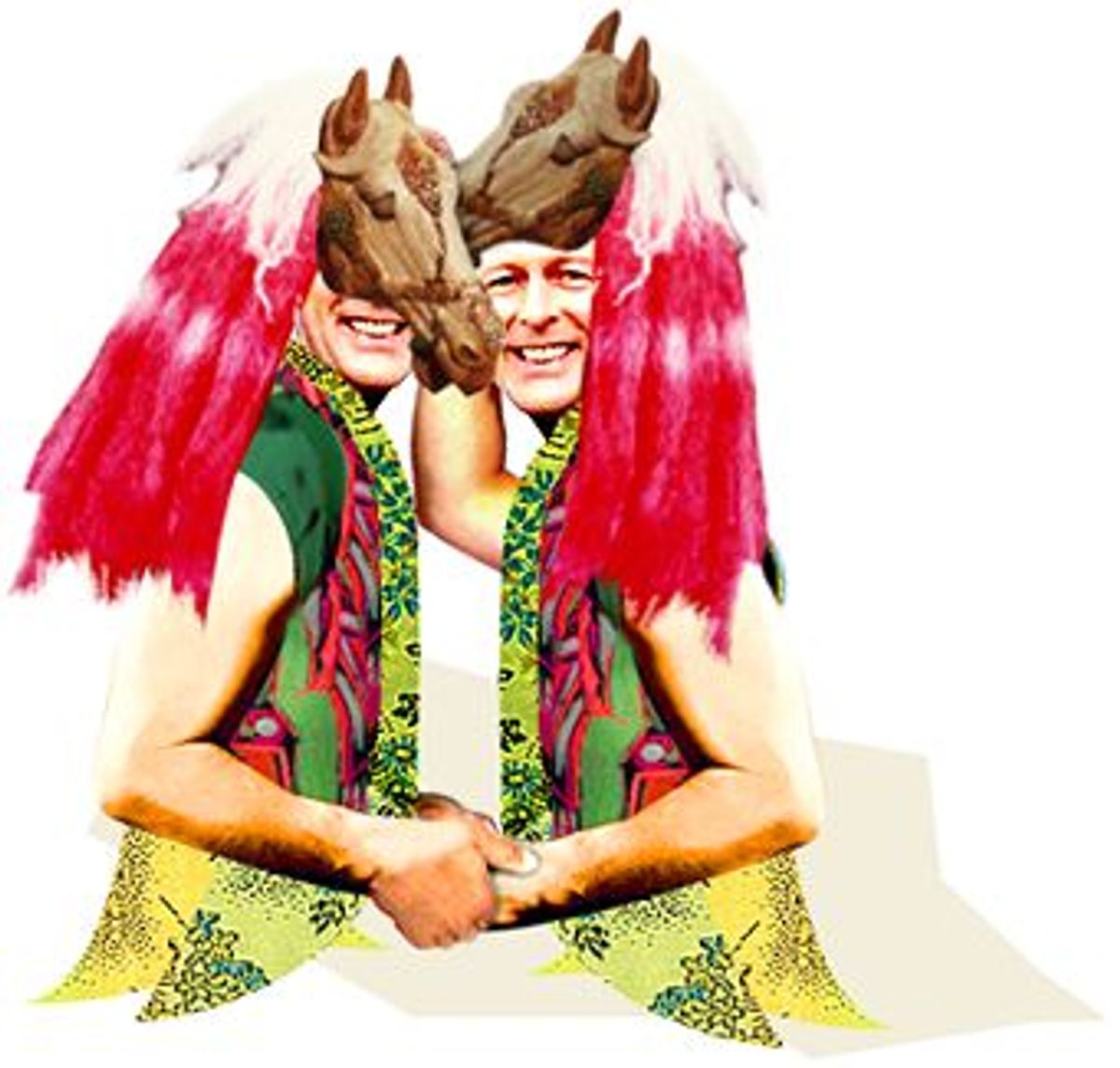 Why can't the people we love be exactly what we want them to be? The famous exchange from "Twelfth Night" shows the perennial struggle of headstrong lovers who seek to control each other:

Olivia: I would you were as I would have you be.

Viola: Would it be better, madam, than I am? I wish it might, for now I am your fool.

Each of them admires the other, but neither is willing to compromise to suit the other, and each is insulted by the other's wish to dominate. This week, a pair of Horses have written in, asking why their partnership has been so stormy. Vincent writes, "Four years ago, Matt and I started seeing each other and had a turbulent affair. We met again for a while in 1998, and seven months ago, in 2001, we started seeing each other for the third time. There are many differences between us, but there are also strong feelings and a strong attraction -- and the fact we've decided to give us a try for the third time disturbs me (not necessarily in a negative way). What do the stars have to tell us?" When two Horses are hitched, do they make a good team?

Vincent and Matt's relationship is an excellent illustration of a complicated fact; there are not really 12 Chinese Lunar signs -- we use 12 because it's easier to understand for people who know the 12 signs of the Greek zodiac. There are 60 Chinese Lunar signs, and that's because each of the basic 12 signs has five incarnations: Metal, Water, Wood, Fire and Earth. Each animal sign has many common characteristics, but wide variation occurs every 12 years. So Vincent, a Fire Horse, is a very different beast than Matt, an Earth Horse. Think of a rearing Arabian steed compared to a Clydesdale. Same species, way different neighborhood.

The sign of Gemini corresponds to the sign of the Horse; and as a Gemini Fire Horse, Vincent is ambitious, energetic, independent, talky and intuitive. He is used to accomplishing his goals through bursts of impulsive energy and almost magical inspiration. His Monkey birth hour gives him extra powers of follow-through; he'll be able to apply himself to win laurels and gain social prominence (important to Monkey natives). He loathes routine, can't bear working for anyone else and is easily bored. He loves socializing but tends to gets so caught up in the moment that he doesn't listen well to others and doesn't notice the impression he makes.

When he does focus on you, the effect can be overpowering. He makes friends easily because he is vivacious and optimistic, but he does not keep friends unless he makes an active effort. Sometimes, he is more at ease with strangers or acquaintances than with close friends, because close associations tend to produce in him feelings of constraint and obligation, which make him buck. He is by nature friendly and generous but likes to be so because he feels like it, not because it's expected of him. Hence his difficulties with committed relationships.

Vincent's romance with Matt is highly charged because Matt is also a Horse, so neither likes being in harness. However, Earth Horses are much calmer than Fire Horses, and less averse to falling in step with someone else. I have observed strong attraction and mutual admiration in Fire Horse-Earth Horse couples, but I worry about their long-term prospects; for one thing, Horses fall in and out of love easily and not too deeply; for another, as the Earth Horse gets older and wants to be his own master, innate Horse competitiveness may weaken the bond. On the plus side, Matt's Taurus sun sign softens the meld, reining in his flighty Horse nature and making him more methodical and compliant. Still, stubborn Taurus likes consistent behavior, so Vincent's wavering attention may make Taurus Horse sulky; and Matt's prideful Tiger birth hour ensures that if he senses he is not sufficiently admired, he will bolt. But problems in this couple are more likely to come from Fire Horse than from Earth Horse; Fire Horse is too changeable to fix long on one person, unless his heart is truly engaged.

Like Olivia in "Twelfth Night," Fire Horses are incurable romantics; they set unrealistic goals for a partner. They long to be in a couple, but only with somebody grand and multifaceted enough to satisfy their splendid imaginations. Such people barely exist in fiction, much less in the schools, offices and shopping malls of 21st century America. Once they pick somebody, they magnify his qualities beyond reason, then vilify him when he disappoints. Fire Horses often choose as lovers either people who are obviously unable to commit or people they can dominate. But for the Gemini Fire Horse to really get caught, he needs a mysterious partner, someone quiet and assured, who ensnares him by being subtler than the typical Horse, someone who rules by seeming not to want to rule.

Horses don't so much want to be "boss" as they want to be not visibly bossed around. They secretly appreciate authority, but people who send out overt "boss" signals spook them. Therefore, a Libra, Cancer or a Capricorn sun sign would appeal, as would Dog, Boar, Sheep, or even Snake moon signs. A type II Scorpio (nature-loving, inward, sensual) Tiger could be a winning combination.

It is worth mentioning here what I call the "teeter-totter factor"; when one partner is significantly older than another. Vincent and Matt first got involved when Vincent was 31 and Matt was 19, and that bespeaks a dominance issue. Is the younger person capable of true commitment, or is the younger person growing himself up on the older person's time? Is the older person respectful of the younger person's individuality, or is the older person trying to occupy a position of unquestioned superiority, conferred by age, experience and security? In such an uneven pairing, equality must be established between the two partners, or else someone's going to be bumped off the seesaw. Vincent and Matt have returned to each other so many times that they clearly have something worth saving. If they want their relationship to last, they will have to share power. It is not enough to be loving or admiring; each must respect the other, each must pull equal weight.

Horses don't like being alone; anyone who has kept real horses knows how miserable they get without a fellow horse to keep them company. And yet, once you buy a second horse, horse No. 1 often resents the attention horse No. 2 gets. Human Horse year natives have the same problem; it's hard for them to reconcile their desire for companionship with their desire to be number one in the barn. Nobody can make two horses harmonize; they must choose for themselves to run in sync. When they do, it's a beautiful thing to see.