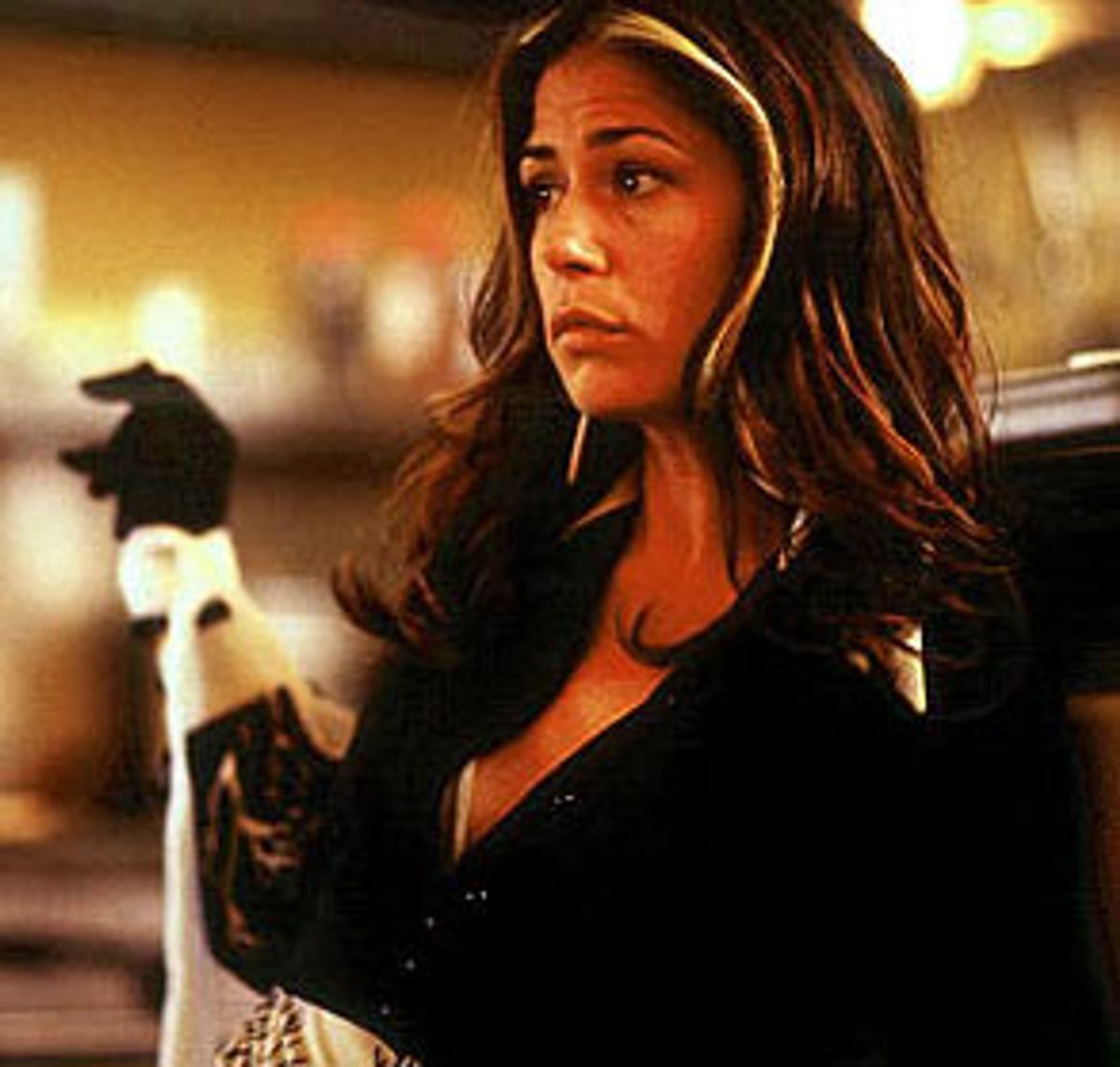 As a hash-slinging Lady Macbeth in the unfortunate "Scotland, PA," Maura Tierney wears an unflappable, couldn't-care-less expression. In some ways, it's a one-note role in a one-note movie -- the note being a smart-aleck adolescent's idea of a Shakespeare parody. But Tierney brings the role more than it deserves. She plays Pat McBeth who, along with her fry-chef husband Mac, is idling away the early '70s working at Duncan's, a small-town eatery, under the thumb of the enthusiastic, cheerfully clueless owner (James Rebhorn). Mac is bursting with ideas to make the place a success and Pat can't stand watching him ignored, can't stand working for people who she thinks clearly aren't as smart as she or Mac.

Pat is one of those small-town, working-class girls who are always done up in the style of the moment. Not a fashion plate, more like a devotee of Seventeen magazine. This being the early '70s, Pat goes around in tailored peasant blouses and flared jeans (though her taste in music is far from late hippie -- Bad Company rules on the movie's soundtrack). And after she puts her scheme to work (inadvertently aided by a clumsy Duncan who falls into the fryolator) and she and Mac wind up in the chips, she switches to Pucci prints and matching headbands.

What's so funny about Maura Tierney is that she takes the look of lethal boredom you've seen on countless bored waitresses and cashiers -- the look that says, of customers and bosses alike, "Can you believe these idiots?" -- and makes it the basis of Pat's murderous ambition. This is Lady Macbeth motivated by nothing more than arrested adolescent superiority. She and Mac are more like horny teenagers than adults; even at work they can barely keep their hands off each other. Except when she's snogging her hubby, Tierney keeps a look of flat disgust on her face. It never seems to change and yet her deadness to anything but her own wants, her disdain for any knowledge outside of what will get her ahead, is alive and funny. She works to give what's been conceived as a trailer-trash caricature some dimensions.

Not enough of an idea. Writer and director Billy Morrissette (Tierney's husband in real life) apparently began conceiving of "Scotland, PA" 20 years ago when he was working in a Dairy Queen and dreamed of killing his boss. On the surface of it, that's a surefire idea. Find me anyone who's worked in fast food or retail who hasn't wanted to kill their boss. The trouble is it's a joke that wears thin pretty quickly. It's easy to parody junk; the clichés are sitting there just waiting to be punctured. But the better the material you parody, the sharper and funny you have to be. You have to rise to the level of what you're parodying, or at least to show enough devotion to it to make yourself worthy enough to make fun of it. (That's one reason the old-movie spoofs on "The Carol Burnett Show" were so good; they came out of loving familiarity with the targets.)

"Macbeth" with "small" characters is a booby trap. Part of the horror of the play comes from the station of the characters. The Macbeths fall from a great height. Mac and Pat are too squirrelly for us to feel any horror or pity in their fall. They're strictly small-timers, and Morrissette doesn't show any indication that "Macbeth" is anything more than noir, where you expect the characters to be small and mean and duplicitous. "Scotland, PA" works on the level of what an exceptionally bright junior high school kid might turn in for a class project. And it's the type of thing you might turn up years later going through old keepsakes; you'd be amused by your preciousness, but also appalled by how shallow you were.

The movie is livelier to sit through than "O," which presented "Othello" as an R-rated after-school special. But it's the work of a piker compared to what Michael Almereyda did with "Hamlet," or what Baz Luhrmann got in the glorious mess he made of "Romeo + Juliet." Some of the transpositions here are clever. The blood on Lady Macbeth's hand is a burn she gets from splattering grease, and instead of compulsive washing, Pat obsessively applies burn ointment. Others feel like notions still waiting to be developed. The three witches have been replaced by three hippies -- played by Andy Dick, Timothy "Speed" Levitch and Amy Smart -- living in the local amusement park. Thankfully, when you're dealing with Dick and Levitch, their scenes are mercifully brief. But they feel like curlicues waiting to be integrated into the movie.

Christopher Walken, with his porcupine pompadour, turns up as the police detective investigating Duncan's murder. The role isn't much more than a chance for Walken to do his by-now patented Walken shtick -- vaguely menacing weirdness. As the movie wears on, plodding through its concept without any surprise or any deepening, you're at least grateful for the distraction he provides.

James LeGros, as Mac, is a bigger problem. LeGros is a wonderful actor who transmits gentleness more than anything else. He can use his quiet demeanor to suggest he's holding something back, something potentially threatening, as he did in parts of "Drugstore Cowboy." But essentially he's a romantic actor. His pairing with Diane Lane in Stacy Cochran's "My New Gun" (still a highlight of American indie cinema) is one of the most charming romantic pairings of the last 20 years or so of romantic pairings. LeGros can play ardor, but he's not a fire-in-the-belly sort of actor, someone who can suggest, as a Macbeth figure should, an ambition that's eating away at him, consuming him. When Mac turns mean, he just seems a suburban husband who married too young and finds himself stuck in a life that offers nothing but more of the same. If he belongs at all here it's because he's stuck in a movie that delivers more of the same, a joke that keeps being told long after we've gotten it.