The mutual fund from hell

Investing in the war on terror could be a winning proposition -- even if we lose. 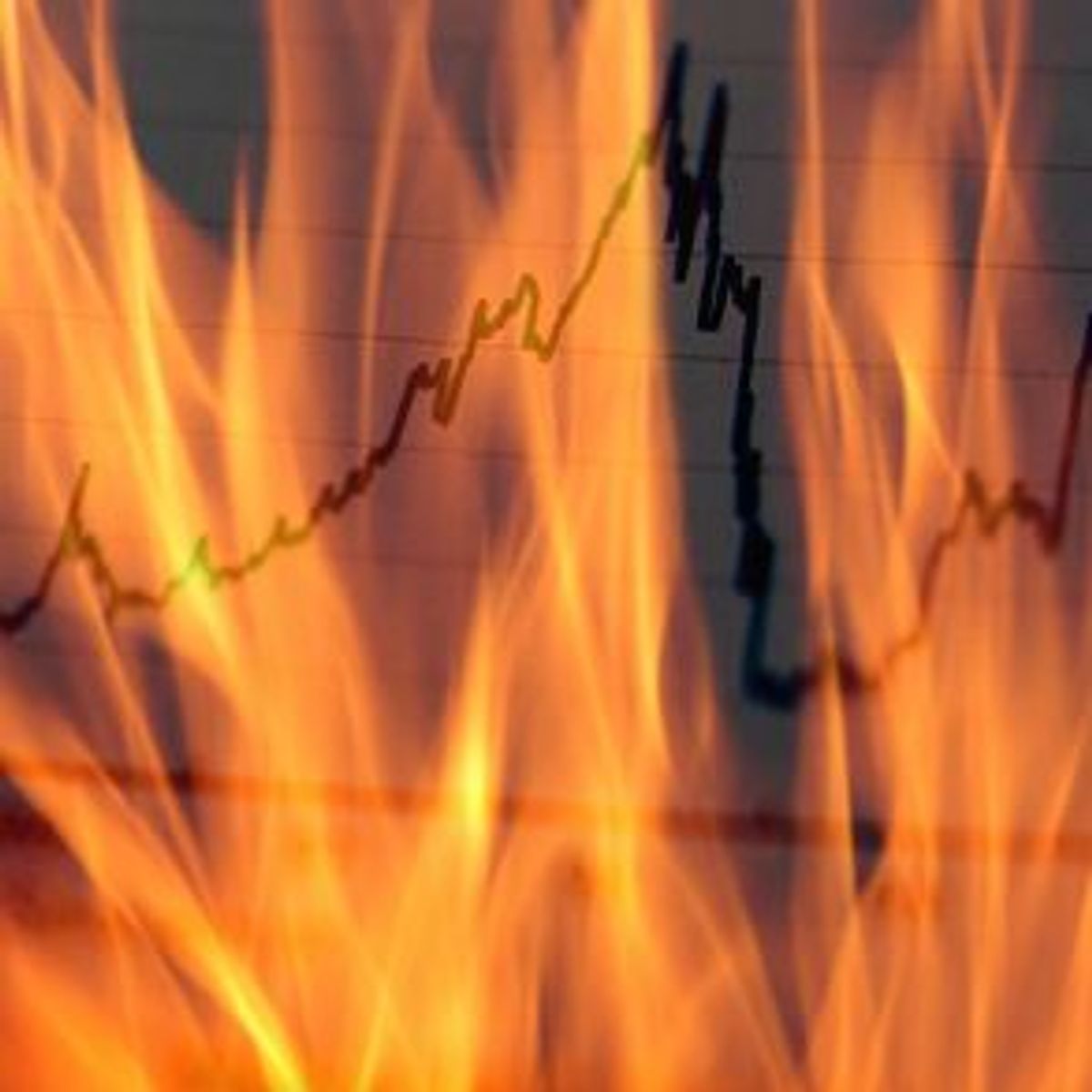 Who's getting fat off the war on terrorism? Not you. Your portfolio's flat and more likely it's down: the S&P crawling along, the Dow little better.

You walk by the tall fences of ground zero on one of those cold, unhappy New York afternoons -- tourists are peeping at the destruction through slits in the walls, street vendors are grinning, they're selling out their FDNY baseball caps, they're getting a piece. Where's yours?

The Axis of Evil Equity, a new mutual fund that's crushed the indexes since 9-11, may be for you. The logical choice for the jingo investor in wartime, the Axis fund is a compendium of companies that stand to make a killing in the war on terror. Axis is designed to profit in times of hostility and fear.

Alas, dear investor, it's too evil to be true.

"It would be political suicide to come up with something like that," laughs Ray Turchansky, the guy who originally came up with it: a superbly cracked idea for an investing hoax. In mid-October, Turchansky, a business reporter at the Edmonton Journal, put together a "virtual" portfolio -- he called it the "Asset Coalition Fund" -- with holdings in a dozen North American companies that manufacture "everything from missiles to security systems and semiconductors, plus three companies that produce tools to detect biological terrorism." With an equal investment in all companies, Turchansky calculated, the Asset Coalition "would have reported a simple, non-annualized return of 127.3 percent between [Sept. 10] and Friday's close a month later. By comparison, during that same period [the] Dow Jones Industrial Average dropped 2.7 per cent."

I called up Turchansky to see if I could pinch his idea. I'd cut some companies, add picks of my own, update the math, and see what happens. I renamed the fund in honor of the latest bogeyman threatening Western civilization, the Iranian-Iraqi-North Korean "axis of evil" (pre 9-11, China, I believe, was the enemy) outlined by President Bush in his State of the Union two weeks ago. "It costs a lot" to fight the axis, Bush told the nation, and indeed his 2003 Pentagon budget of $396 billion is a 13 percent increase year over year, the largest since 1981, when Ronald Reagan gave us the Soviet Union as "evil empire." In all, Bush wants to spend $2.1 trillion on the military over the next five years, in an orgy of deficit spending. According to the Center for Defense Information, an independent Washington think tank, the Bush arms buildup budget will be 15 percent higher than the average for the entire Cold War, and this for a force that's 30 percent smaller.

So praise Bush and pass the ammunition. Our fund is looking even better than when Turchansky ran the numbers back in October: The Axis of Evil returned 185 percent for the period from Sept. 10 to the close on Feb. 5. For the same period, the S&P 500 climbed a piddling .32 percent, the Dow Jones Industrial a mere .83 percent.

Center stage in the fund, of course, are the Big Five defense contractors. Boeing is set to make billions on deals for its lethally dysfunctional V-22 Osprey helicopter-turboprop and its generously over-budget F-22 Raptor fighter jet. Raytheon makes the $750,000 Tomahawk missile, a favorite weapon of the military and used by the scores in Sudan, Iraq and now Afghanistan (the Navy, apparently, is running out of them). Lockheed Martin just sealed a $200 billion development contract for something called the Joint Strike Fighter. Northrop Grumman describes itself as "well-positioned in missile defense," meaning that it stands to win on the $9.2 billion Bush hopes to spend on the newly formed Missile Defense Agency (funding is expected to rise to over $11 billion annually by 2007). And shipbuilder General Dynamics is looking at some $7 billion in contracts for destroyers and attack submarines and aircraft carriers and lots of other costly toys.

Defense analysts say that most of this has nothing to do with streamlining the military for the light, super-mobile special ops needed to fight terrorists. But who cares? There's money to be made. Predictably, the Big Five are all doing well on Wall Street (except, oddly, Boeing, the only loser in the fund, down 5.9 percent since 9-11).

But the real highfliers in the Axis of Evil are the security and biometrics companies that will help homeland defenders track your every move and keep out the jihadis. Viisage Technology, which makes digital ID systems, is up 317 percent; Visionics, which helps law enforcement manage fingerprint and voice and face recognition databases, is up 182 percent; Invision Technologies, which makes explosives-detection systems (useful at luggage check-ins), is up a rip-roaring 1,299 percent.

Then there are bioterror detection experts like Cepheid and bullet manufacturers like Alliant Techsystems, both looking very healthy. Point is: Run down the line of companies that cater to a climate of impending doom, you'll find rising returns in every one.

I called up Amy Domini, who manages Domini Social Equity for investors with a "conscience," to brag about how well the Axis of Evil is doing. Social funds like Domini make a point of shutting out tobacco, alcohol, gambling, big oil, defense, small arms, and agribusiness stocks -- wherever profit seems to come before people, the social funds say no. As for the Axis: "Well," says Domini with a sigh, "I've never come across such a fund. If it did exist, the manager would have to be the most cynical human being ever born. But this is definitely his time -- the heyday for such a thing. There's a man in the White House who appears to be absolutely obsessed with war."

But if there's a war on, isn't it in fact far from cynical to invest in the big-budget defenders of the nation? I mean, get with the program, Domini! Come in for the Big Push. Come to think of it, it's the socially "responsible" funds that are un-American: They won't invest in oil or pistols or even Jack Daniels. Probably dangerous; definitely to be monitored. More importantly, look at their lousy returns. Since 9-11, Domini Social rose just .84 percent, beating out the Dow, sure, by a hundredth of a percentage point -- squat compared to the Axis' 185 percent. Other socials climbed in the 1 to 2 percent range. The Pax World Balanced Fund was down 1.1 percent. Pax just doesn't pay.

Does anybody really think this way? Funny thing: When Ray Turchansky filed his item last October, he says he got calls from interested parties "all over Canada."

"Gee," they told him, "my financial advisor has looked all over and we can't find this thing. We want in."

And they weren't even United States citizens. God bless 'em!