"Rebels on the Air" by Jesse Walker

Before it became an cash machine for station owners, radio was briefly the province of madmen who made it the liveliest medium in America. 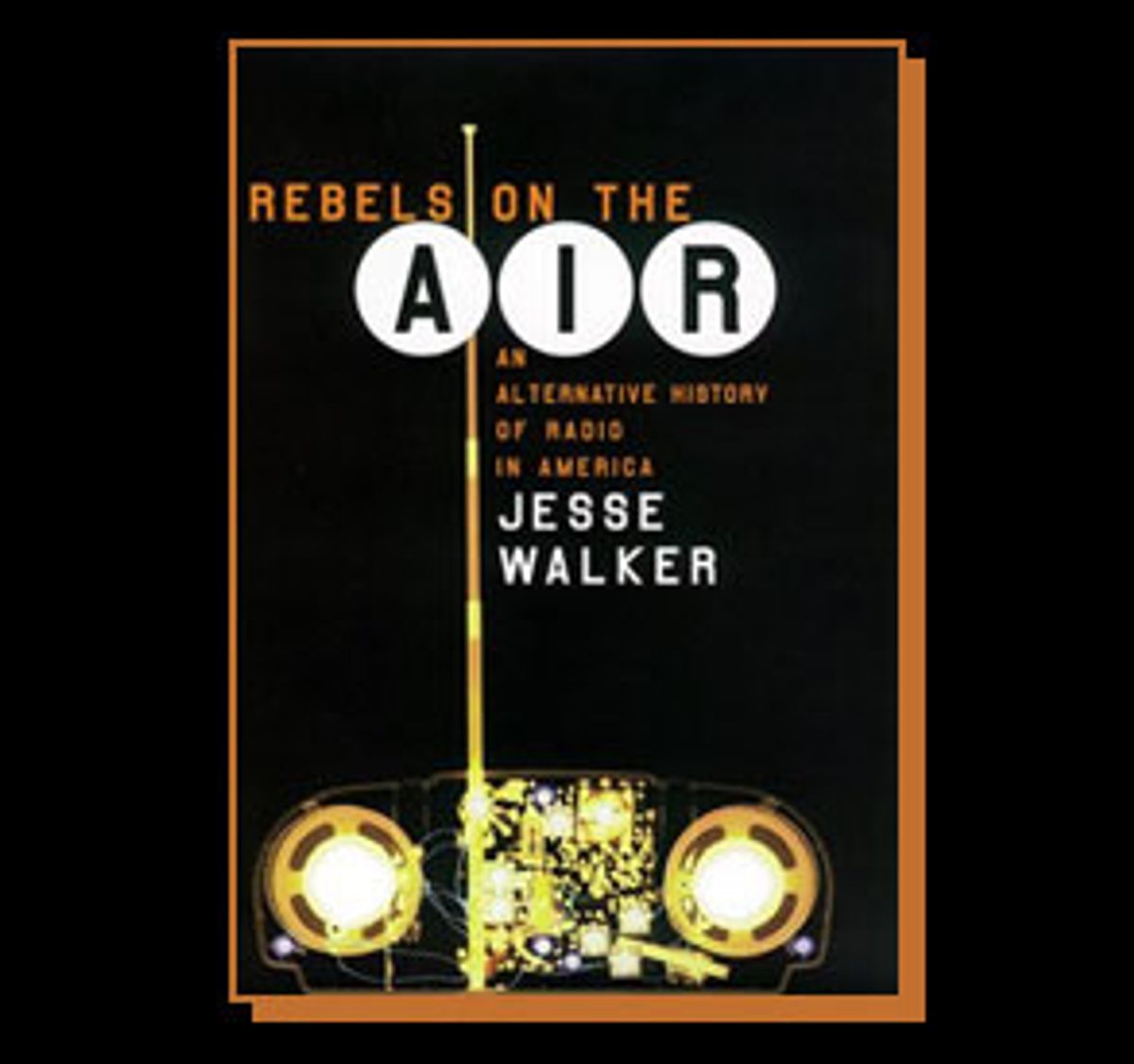 If religion is the opiate of the masses and television is the plug-in drug, then radio these days must be the cheap malt liquor -- Mickey's Big Mouth. There was a time, however, when radio -- at least some of it -- was more like cabernet, or maybe Panama Red. That was back when the radio crazies got loose, got into the control rooms, behind the mikes, the turntables and the tape machines and breathed some life into the moribund medium, but that was long ago.

Happily, you can now return to those glorious days of yesteryear via Jesse Walker's "Rebels on the Air: An Alternative History of Radio in America," which might be more accurately subtitled "A History of Alternative Radio in America," because alternative radio, community radio, listener-supported radio, noncommercial radio, free-form radio, radio free radio or whatever you want to call it is the book's primary focus, but let's not waste time picking nits. "Rebels" came out late last year and should have received much more attention than it did; it's just as lively and packed with information as its subject.

And you'd be right to ask, "Exactly which radio crazies are you referring to?" because crazies have gravitated toward radio almost since its invention. If they weren't crazy at first, their passion for radio made them so. They came in waves. The first was in the early years of the 20th century when radio was a mere babe and lads were making crystal sets out in the potting shed, but the noisiest and most theatrical was in the 1960s and '70s when the radio mau-maus came along and tried (with occasional success) to turn radio into something more interesting, vital and artful than a giant ATM for station owners.

The struggle began back in 1909 when five boys founded New York's Junior Wireless Club, Ltd., the first amateur radio group. "Barely a year later, " Walker writes, "the boys' club had taken the lead in lobbying against Senator Chauncey Depew's Wireless Bill, one of many congressional efforts to restrict amateur activity. It was a strange moment in history, a time when the defense of popular access to the airwaves could fall to a few boys on the cusp of adolescence. Stranger still, such boys were the radio innovators of the day, discovering uses for a technology the establishment had assumed would be employed only for point-to-point communication, ideally by licensed professionals."

It wasn't long, however, before the Big Boys moved in -- as the 1920s drew to a close, three nationally based, advertising-supported networks ("two of them owned by RCA," an entity created by the U.S. government) dominated radio in America. The inventive youngsters vs. the corporate profiteers has been radio's polarized story ever since. The whippersnappers have usually been on the losing end, but not always. As Walker, an editor at Reason magazine, has meticulously (and entertainingly) documented, the anarchists, the pacifists, the oddballs and the creative geniuses have left some distinctive footprints on American radio.

After a short history of the medium's earliest years, Walker's narrative jumps to the 1940s when a conscientious objector named Lewis Hill doing alternative service during World War II conceived of "a new kind of radio station. It would run few commercials. It would be a place for free discussion and constructive dialogue, a place true to his anarchist and pacifist ideals ... 'like a living room.'" By 1949, Hill had put his first radio station on the air, the noncommercial KPFA-FM in Berkeley, Calif. Hill's Pacifica Foundation would go on to establish stations across the country, which, despite their ongoing troubles (some wags call Pacifica the Bickerson Broadcasting System thanks to its seemingly endless series of internecine battles), still compare favorably with the much more numerous and formulaic National Public Radio outlets.

Yet the radio man who Walker seems to find the most intriguing and fun to write about is not Hill, but the irrepressible Lorenzo Wilson Milam, who Broadcasting magazine, the house organ of the commercial broadcast industry, once called "the Johnny Appleseed of community radio." He was a very different creature than Pacifica's Hill (who committed suicide in 1957). Milam (who I know, and who is still very much alive and an occasional contributor to Salon) directly created, or had a hand in, numerous stations across the U.S., beginning in 1962 with KRAB-FM in Seattle (later, his loosely affiliated group of stations became known as the KRAB Nebula, with call letters such as KTAO, KBOO, KDNA and KCHU -- "the wet spot on your dial"). While Hill imparted a certain earnestness to KPFA and Pacifica, Milam's stations, though they broadcast extraordinarily diverse programming, also reflected their founder's taste for the wry, the wacky and the eccentric.

Maybe it had something to do with where he came from. Milam told Walker that some of his "early inspirations" were heard on the radio while he was growing up in the deep south in the 1930s and '40s: "There were a number of characters I used to listen to in Florida and Georgia ... There was Daddy Rabbit 'with the do-right habit' and Hank the night watchman and Pappy Schrappy ('makin' you happy'). They were true wits and originals -- storytellers in the best southern tradition ... Hank and Daddy Rabbit and Pappy would tell stories (often rather lecherous ones) -- would skirt the border between lurid and gross and hilarious, but always with a wit that made it impossible for those of us listening in to complain. We were spying on another culture weren't we? -- for in the segregated south, we knew nothing of the culture, the art, the exquisite music of the blacks because we never ventured into that part of town."

In '58 and '59 Milam worked at Hill's Berkeley station, which he remembered as "a wonderful mix of music and talk and drama and high art." He "liked his days at KPFA," Walker reports, but in creating KRAB he invented "something different. Weirder. Freer."

"Most historians point to KPFA as the nation's first community radio station," Walker writes, "and there's something to be said for that point of view, even if the phrase is a little anachronistic. But if Lew Hill fathered the movement, Lorenzo Milam reared it. KRAB's varied schedule made Pacifica's look tame: a single day's lineup might include both a special report from the front lines of the civil rights struggle and a fifteen-minute program produced by the White Citizen's council."

As Milam and his stations grew famous, he was so often asked for advice on how he did it that he finally wrote a book on the subject, "Sex and Broadcasting: A Handbook on Building a Radio Station for the Community," that became something of a bible among the radio crazies as well as the not-so-crazies. None other than the London Times Literary Supplement hailed it as "wiser and funnier than almost any other book in the field ... It certainly provides the richest account yet published of the ways in which broadcasting is experienced, by both listener and broadcaster."

Of course, there was, and continues to be, more to alternative radio than Hill and Milam's various offspring, and "Rebels on the Air" does a good job of underscoring the crucial role that an array of independent media plays in a democratic society. Walker's also diligent in his account of legal and illegal radio experiments in the U.S. and abroad, commercial "freeform" (such as KSAN-FM and KMPX-FM in San Francisco that reached their zenith in the late 1960s), micro radio, low-power radio and even citizen's band, Internet and satellite radio. But one senses that Walker sees the conjoined eras of KPFA at its eclectic best and the KRAB Nebula stations at their hypereclectic pinnacle from the late 1960s to the early '70s to be a time when the radio crazies reached for, grasped and held on for a while to something even those far-seeing, innovative boys of the Junior Wireless Club, Ltd., could never have dreamed of.

Nowadays, Pacifica, with new management in place after two years of infighting, is still going strong. Milam left radio in 1975, fed up with the fractious politics of the Dallas station where he was working at the time, but many of the stations he influenced are still on the air. And his evangelical zeal for a truly democratic and diverse approach to American radio still inspires (or horrifies) broadcasters and aspiring broadcasters across the land. "A radio station should not just be a hole in the universe for making money, or feeding egos, or running the world," Milam wrote in his book. "A radio station should be a live place for live people to sing and dance and talk: talk their talk and walk their walk and know that they (and the rest of us) are not finally and irrevocably dead."