Better than a saint 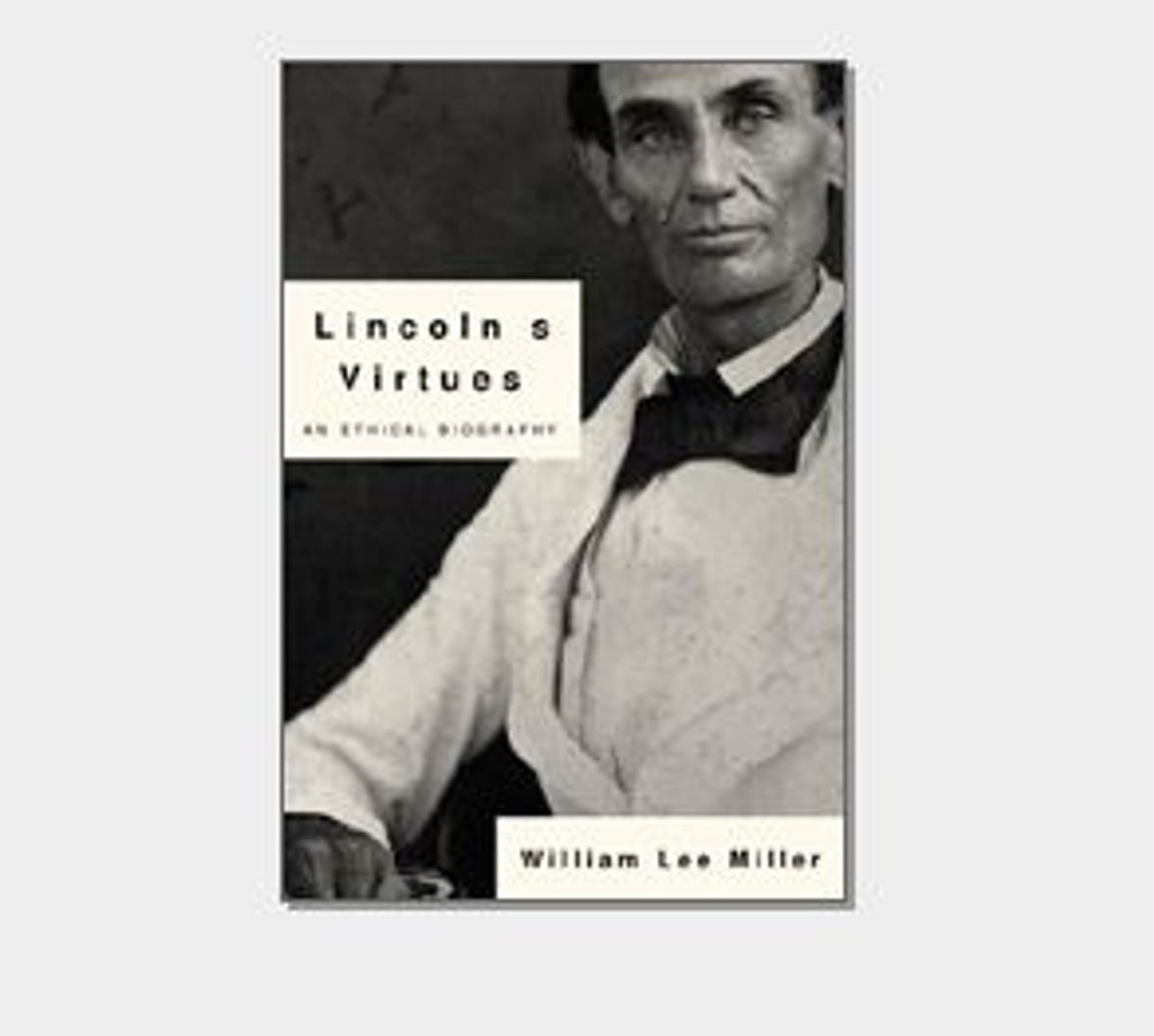 Contemporary Americans are so used to thinking of our national politicians as greater or lesser evils that we've gotten out of the habit of imagining what a good one -- a politician of exemplary moral character -- might look like. We have to reach back into the remote provinces of our history to find leaders we can wholeheartedly admire, and even then it seems as if their advantage lies in the fact that everyone who might possibly remember a reason to hate them has died.

And then there's Abraham Lincoln, subject of thousands and thousands of books that seemingly disprove William Blake's belief that the evil are more interesting than the virtuous. Lincoln is that rare president who lives up to all the lofty rhetoric America comes wrapped in, and William Lee Miller, a retired professor of political and social thought, has written a book that putatively asks how he got that way. The question is provocative, for as often as we demand to know how school shooters and American Taliban wound up going astray, we seldom wonder what causes someone to be good.

Perhaps that's because it's getting harder and harder to define what "good" is. And, alas, Miller concerns himself far less with how Lincoln's virtues were formed than he does with demonstrating that the 16th president was indeed virtuous. He does so because of recent efforts on the part of some historians and thinkers to tarnish Lincoln's halo -- the result, Miller believes, of "expectations aroused by the myth" of the man's near-sainthood that "give a sharper edge to the disillusioned criticism" and, possibly, the fact that "in the musical chairs of literary effort the only places left open, it would seem, are those of skepticism and attack."

Miller himself doesn't endorse any notion of Lincoln's "instant and constant wonderfulness," which, if "stipulated in advance, taken for granted from the outset, and woven into the national memory as a universally accepted fact," actually detracts from the man's achievement. Lincoln was "a real human being in a real world," and the fact that he accomplished "mighty deeds" while yet remaining "a humble, generous person," that he held great power without being corrupted by it, is a tremendous feat.

In tracing that feat, Miller's "ethical biography" doesn't present new research; rather it synthesizes much of the vast body of writings on Lincoln in order to show, first, that he was morally admirable, and second, how he formed his moral judgments. Miller examines several key moments in Lincoln's life -- a protest he and a fellow representative lodged with the Illinois state Legislature explaining why they had voted against a joint committee's statement against abolitionists; his support for the 1848 presidential campaign of Zachary Taylor; his return to politics after a four-year hiatus in order to speak against the 1854 repeal of the Missouri Compromise; his magnanimous withdrawal of his candidacy from several elections; and so on -- in each case considering all of Lincoln's possible choices and his reasons for selecting the ones he did.

"Out of their margin of freedom, whatever it may be," Miller writes, "human beings make choices. The choices that have an impact for good or ill, that are in accord (or not) with some standard of worthy human conduct, receive our praise or our censure -- they are 'moral choices.'" By his choices, the author insists, we come to know Lincoln's moral principles and in understanding what those principles are, we can see that recent criticism of Lincoln's "white supremacism" and "racism" are not only ungrounded, but indicate failings in his critics themselves.

First and foremost, Miller argues, Lincoln chose to be not only a politician, but a vigorous partisan; in fact, "if Abraham Lincoln was not a politician, then words have no meaning." Here Miller also picks a quarrel with the influential mid-20th century Lincoln biographer James G. Randall, who wrote that "it cramped [Lincoln's] soul to operate within the limitations of a party."

Miller, inspired by Max Weber's famous essay "Politics as a Vocation," defends the honor of "politics" as embodying an "ethics of responsibility," a real-world practicality, rather than the perfectionistic absolutism of certain kinds of radicalism (for Weber, that radicalism took the form of pacifists and anarchists; for Lincoln it was abolitionists). Lincoln, Miller writes, "was not a lone-wolf moral hero but participated with others in collaborative efforts -- parties, legislatures, governments ... calculation and compromise were therefore of the essence in his decision and action ... the great object of his and others' joint efforts was to accomplish society-wide goods through the instrument of government."

This is one of the oldest political debates around; it crops up every time a third party makes a significant (i.e., potentially spoiling) bid for national office, as it did in the 2000 election and in 1848, when Lincoln's own party, the Whigs, felt their margin being nibbled at by the more abolitionist Free Soil party. And certainly Lincoln did not embrace the most aggressive anti-slavery policies of his day. His sticking point was an adamant opposition to the "extension" of slavery into new states in the Union; he didn't advocate the emancipation of slaves in states where the institution already existed.

This position seems, as Miller acknowledges, disappointingly tepid to the modern eye. It, and other occasions when Lincoln is seen to be insufficiently zealous in attacking not just slavery but the commonplace racist ideas of his day, have become the basis for the new "Lincoln was a racist" (or, at the very least, a "reluctant emancipator") school of thought. But, Miller argues, Lincoln was never less than utterly opposed to slavery, which he considered a "monstrous injustice," and he was largely uninterested in theories of race. (Lincoln seems to have believed that the alleged "inferiority" of blacks to whites, if it existed, was irrelevant; no person had the right to enslave any other human being regardless of that person's aptitudes.) Those who denigrate Lincoln for not attending to the priorites of contemporary politics are typical of the uncompromising and sometimes destructive radicals of his own day.

Furthermore, Miller insists, Lincoln balanced his bedrock opposition to slavery against his fundamental commitment to America and its form of government. Because we still live with the painful racial legacy of slavery, we subject Lincoln's feelings on that issue to particular scrutiny; we now take for granted the Union he preserved at such a terrible cost to so many Americans, including himself.

Miller's defense of the morality of Lincoln's political choices is thorough, but his portrait of Lincoln's moral formation is pretty sketchy. There's something bracingly old-fashioned, as Miller readily acknowledges, about his "picture of a human being as a rational moral agent," his emphasis on "human reason" as the basis for Lincoln's deeply felt beliefs. And this doesn't seem inappropriate in describing the life of a man who mostly lacked the weaknesses and atavistic passions that make a person a "fascinating character" to the contemporary biography reader. Unlike Coleridge, Lincoln, a lifelong teetotaling nonsmoker, never succumbed to "substances"; unlike Kennedy, he remained faithful to his (unloved) wife. Of the flaws that at times drag even the great down to the level of the rest of us, Lincoln had precious few, perhaps none at all.

Yet Lincoln was never boring or priggish, as Miller demonstrates in some of the book's most valuable passages. It was his very lack of self-righteousness, Miller argues, that made him so good at advancing his political and moral agenda. He was "moral but not moralistic," and unlike the sanctimonious (and far less effective) abolitionists of his time -- men like Charles Sumner, who remarked that you'd no sooner find a joke in one of his speeches than in the book of Revelation -- he could "condemn slavery itself ... without giving off that odor of haughty superiority and preemptory oversimplication."

Instead of resorting to blame and thunderous denunciation of slaveholders and Southerners, Lincoln treated slavery as an evil that was "the responsibility of the entire nation." He observed that "they [the Southern people] are just what we would be in their situation," and when he addressed Southerners he asked them to consider the ways they had already shown their true repugnance for the institution by stigmatizing and eventually outlawing slave trading. He learned to present his reasons for holding his beliefs clearly and earnestly, without personal attacks. Righteous indignation could be called the American national vice (certainly Miller sees it in Lincoln's contemporary critics), and Lincoln set a remarkable and challenging example by eschewing it.

Perhaps there is a touch of the cold, clear light of human reason to this approach -- it is far more persuasive to invite people to change their minds than to berate them into defensiveness, after all. But this key aspect of Lincoln's genius doesn't really seem to be the result of the wide reading and deep thought to which Miller attributes Lincoln's moral development. No doubt there were men of his time, perhaps even of his class, who read much the same books and spent as much time pondering them.

Instead, Lincoln's generosity and humility, like his wonderfully fastidious ambition and his winning sense of humor, are a matter of personality, of temperament. While Miller does an excellent job of showing us how these qualities enabled Lincoln to be "moral but not moralistic" -- a rare, almost miraculous thing that is close to the heart of his greatness -- he can't tell us where they came from.

Partly that's the result of the inherent fustiness of Miller's approach, and partly it's a consequence of the lack of information about Lincoln's early life. Drawing together a collection of scraplike anecdotes and memories, Miller tells us that the young Lincoln, when he could, refused to hunt, fish, gamble, farm, fight, swear, smoke, and that he always vigorously protested cruelty toward animals. The author notes that all of these were commonplace activities for the men around him. And yet while rummaging around for early mentors, and finding "fewer face-to-face original powerful moral influences" than one might expect, Miller never quite makes the leap to fully crediting the women in Lincoln's early life: his mother (who died when he was 9), and his beloved stepmother.

Surely this is at least partly where the young Abe acquired the gentleness, humility and inclusive spirit that played as much a role in his destiny as his ideas? Miller credits the stepmother, Sarah, with a contribution that consisted of merely "recognition that he was unusual" and "emotional sustenance," "support" rather than "guidance," as if emotions were somehow peripheral niceties to the task of forming a moral character. But isn't morality as much a matter of feeling as of thought -- can the two even be separated? Can the idea that slavery is a "monstrous injustice" be the result of dispassionate reason alone, or doesn't it also indicate an imaginative act of sympathy or empathy? Didn't emotion guide Lincoln as well as thought?

These are questions that, perhaps, given the limits of the record, Miller can't answer. (Richard Slotkin's "Abe: A Novel of the Young Lincoln" is a splendid fictional treatment of the question of how Lincoln became Lincoln that satisfies in a different, complementary way.) But his book does teach us to ask them; it clarifies what made Lincoln such a remarkable leader. Miller is right that to regard Lincoln as if he were a saint is to obscure the humanity that is the fabric of his greatness. To paraphrase Hamlet, he was a man, take him for all in all -- and we shall not look upon his like again.