How to survive a cougar attack

"At that moment, with his jaws around my neck, I was reminded that the Holy Spirit is more than one billion times faster than a cougar." 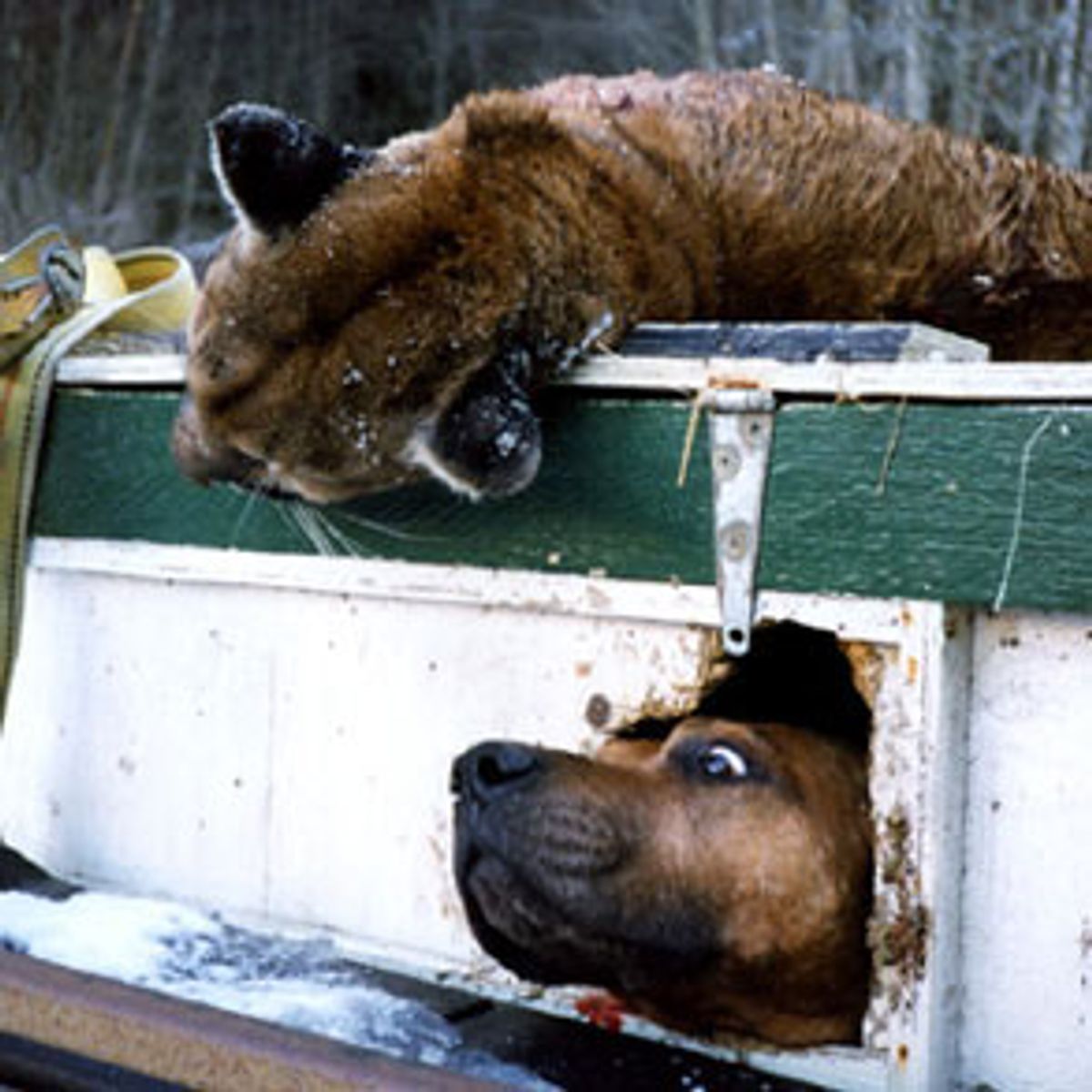 In the history of cougar attacks in North America, the tale of Clarence Hall -- "legendary Ol' Clarence" of British Columbia, as the papers dubbed him -- is extraordinary. Hall, who is 77 years old, grew up in Pittsburgh, Pa., worked the steel mills, worked as a bricklayer and a builder, but from a very young age his happiest employment was trapping in the woods, taking weasel, mink, fox and raccoon. This naturally started him hunting. He became very good at it, a budding marksman. War came. He was sent to hunt man in Normandy, fighting for Patton's Third Army. When he returned, he went west, to Arizona and Idaho and then Canada, and became a professional hunter of "problem" animals, the coyote and wolves and cougar that prey on livestock.

Tracking the cougar was soon his specialty: He learned their furtive, intelligent ways, and he came to like them.

In the winter of 2000, Hall was the hunted one. The local papers showed him chuckling about it afterward from his hospital bed, the reporters took photos of his riven cheeks and chewed-up neck, and within a day he was up on his feet, within a week he was out once more with his dogs and tending his farm, where he raises turkeys, pigs and chickens and has a garden and an orchard of fruit trees. When I called him last summer to ask what's it like to battle hand-to-hand with an 80-pound lion, he said, "Oh my goodness! Well, let me tell you ..." Then he told me what happened on that gray day in January.

"Neither you nor I nor any being on earth is prepared to face a cougar attack," Hall said. "When it happened to me, I felt his jaw on my head and the blood running down, but I survived, because I was given inside instruction from the Holy Spirit -- in split-seconds the message came to me, and it saved my life.

"My son and I have a contract with the Ministry of Environment here in British Columbia, in the Bella Coola Valley, seven miles from the Pacific, snowcaps on all sides and a valley that goes on and on. Any wild animal attack -- and we get a lot of 'em, mostly wolves, black bear, grizzly hitting livestock -- we get a call and we head out at daybreak, take our hunting dogs in pursuit, black-and-tan and red-bone and bluetick hounds, 14 in all. I've hunted for 60 years, hunted every big animal you can name. Let me tell you: The cougar is the most unpredictable animal I've ever run into, very difficult to track, the kind of animal who will change his direction -- just turn right around -- for no apparent reason. A secretive and sleek and sneaking fellow, the shyest creature on the North American continent: Give him one leaf and he'll hide behind it, hide himself as no other can do.

"But beware when he gets bold. The cougar population is absolutely out of control in Bella Coola. He's showing up in people's backyards, taking dogs and cats, children and grown men too. Give you an example: On the 16th of July of 2001, the wife of a retired schoolteacher saw a cougar out her back window, so the schoolteacher and the local game warden go on a hunt for this cougar. And they find nothing, except for a squirrel, a red squirrel. They come into the backyard, returning home, and the wife looks out the window and she couldn't believe what she saw: 15 feet behind the two men is a cougar stalking them, and they didn't know it, didn't hear a thing, and she bangs on the window, and my goodness, there's the cougar, 15 feet away! A medium-size male who was in good shape, perfect health, wasn't starving -- and he was stalking a human being.

"A friend of mine has sheep penned behind a woven-wire 5-foot-high galvanized fence. A cougar took a full-grown sheep up over that 5-foot fence, and from there dragged it some 200 yards to the base of a huge red cedar tree, an old-growth 7 foot in diameter. The tree was rotted out on one side, and there the cougar had made what we call his 'lay-up' -- not a lair, but the place where he recuperates after the kill. A cougar spends an awful lot of energy taking down a kill -- they get exhausted in the attack, because it's warfare. They cut the back of the neck with their claws and bite the back of the head, and in doing so they bleed the animal to death.

"Now I went out to look at that lay-up, there were tracks of a mother and her kitten, they had devoured my friend's sheep, and there was nothing left but a few bones, the skull was cracked, the brain was eaten. But the funniest thing was the wool they'd left behind. Cougar have an abrasive tongue, and they use it to break off the hair from a kill, by licking. They almost deliberately, neatly, stack up the hair by the carcass before they eat it. They're neat creatures. They have what we call 'scrapes,' like a housecat who covers his pee or his crap. Well, the cougar goes overboard, he reaches out with those big long arms, 2-foot-long, and he scrapes up a pile over his crap sometimes 8 inches thick with leaves and earth. It's his nature.

"A few years ago, a cougar attacked a lady in the woods, ate her while she was still alive and totally conscious, covered her in leaves and grasses -- hiding his kill -- but a good friend of mine found her, the cat challenged him, circling, and he shot the cat dead. My friend spoke to the woman, and she said, 'Now I'm dying,' and it was the last thing she said.

"I'm a World War II veteran, went over on D-Day plus 17, got captured in Normandy by S.S. troopers on tanks. I spent 297 days as a slave laborer for Adolf Hitler. I was in a 1-square-mile camp for 20,000 starving men. A place where death was so common, they bulldozed the bodies into pits right outside the fence.

"None of that scared me the way that cougar did, that day he attacked me. Because you knew where the Panzers were coming from.

"On the 24th of January of 2000, in the early hours of the morning, a dog had been killed on an Indian reserve, and I went out, before the hunting party had gathered, to pick up the tracks of the cougar that did it. It was minus 4 degrees centigrade, two inches of snow on the ground, overcast, good tracking weather. I was waiting for the hounds to arrive, so I left my rifle in the car -- worst mistake of my life -- and went into the bushes past the backyard where the dog was taken.

"And to my shock and surprise, I turned my head, and there, about 40 feet from me, at the base of a spruce tree, all curled up, head down, swishing his tail, was an adult cougar. I ducked, and I did it softly: Movement causes a cougar to attack -- you try to back up, you try to run, he'll pounce.

"I snuck back a distance of 150 feet, and I was walking to my car and I heard nothing when he hit me. First time in 60 years of hunting that I've ever been attacked. Oh my goodness! It was like a baseball bat to the back of the neck, the blood is filling my ears and running down my shoulders and I'm down in the snow: four big canine teeth embedded in the muscles of my neck, and in the blink of an eye it let go and grabbed me again and then it shook its head just like it was killing a deer, shaking the life out. This is all in dead silence, no growling, no hissing, and I said, 'Clarence, this cougar is going to kill you.'

"Now, at that moment, with his jaws around my neck, I was reminded, I was made conscious, that the Holy Spirit, the Spirit within me, my innermost being, is more than one billion times faster than a cougar. I went hot with the thought of it, hot all over, my mental faculties turned razor sharp. Instantly, I remembered an old rule: If ever attacked by a dog, place your hand behind the lower canine teeth on the lower jaw and you can control that animal. Bang! Never hesitated! My right thumb went in one side of that big jaw and my left forefinger and middle finger went in the other, I pulled down and pulled those ugly teeth out of my neck, and there's blood everywhere in the snow, and those canines are cutting my hands. I believe I am the only living man to deliberately place his hands in the mouth of an attacking cougar.

"So I wrestled that cougar's head and neck over my chest and as quick as you could blink an eye my left arm was wrapped around his neck, choking him. I put such pressure on him that 3 and one-half inches of the blood vein in my left arm was totally crushed, and to this day has not come back. That vein has dried up.

"My plan was to flip its head and suffocate him in the snow, but just then, somebody come running up on the scene, a man with a .22 rifle, he stood about 12 feet away, and not knowing who this young man was or whether he could shoot straight -- well, I've got a cougar on me and now I'm looking down a rifle barrel, and of all the scare I had, that was the scariest -- I hollered, 'Don't shoot! Come right up here within 12 inches, and lay into him.' He fires four shots and when the fourth shot hit that cougar in the spine, I felt it go limp.

"The cougar had every reason to attack me. He was starving. There was nothing in his stomach but water, and porcupine quills in its throat -- those 'stickers', the quills, were his last meal, and they hurt him. He was in pain. And when I put my hands on either side of his face, and I looked straight into his eyes, I felt sorry: That was the closest I've ever gotten to such a fierce animal, and I saw how beautiful an animal this was, and I felt sorry that it had to be destroyed, that I had to kill this pretty animal.

"One of the prettiest animals in North America, a proud and master predator, a species unto himself, and he knows it. I have a great respect for the cougar."