Straight from the heart

The greatest love letters of all time share some techniques with direct-mail advertising, but the letters had a higher success rate. 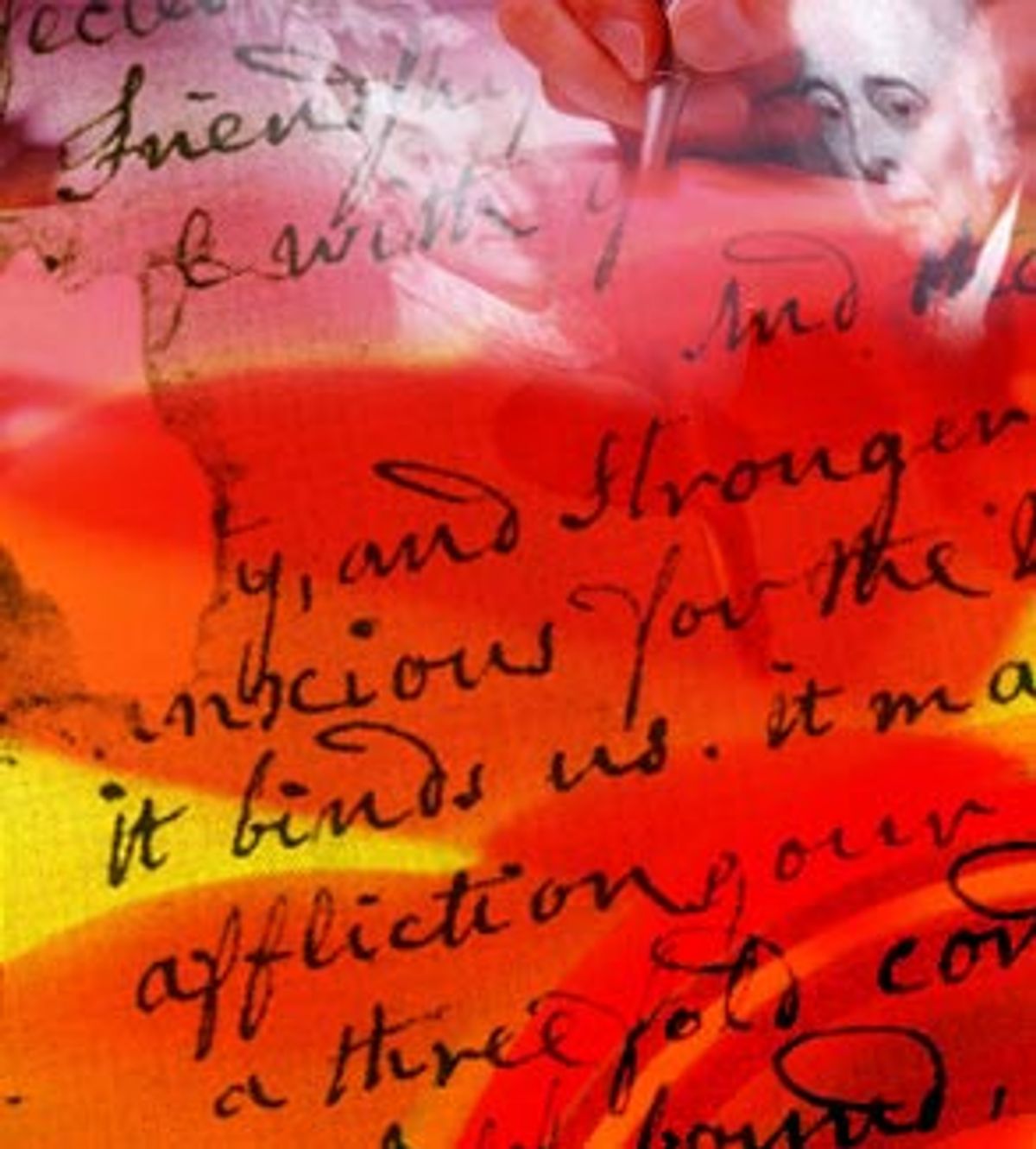 The language of love is universal, much like the practice of advertising. Ever since the first frog made his bog sound more appealing by crafting a catchy mating call, endless repetition has been the rule for lovers and advertisers alike, with innovation the exception. So it's reasonable that the 50 greatest love letters would have a lot in common -- and even that they'd function on the same principles as the most brazen junk mail.

They do. At least that's a conclusion to be reached if the letters in "The 50 Greatest Love Letters of All Time" are in fact the 50 greatest love letters of all time. Selected by autograph dealer David H. Lowenherz, many were penned by notorious lovers like Ernest Hemingway and Henry VIII. On the whole, they've done their job well, whether that's meant wooing a wife, harnessing a husband or just leading a lover into a tryst.

Ad pros use the term "pull" to denote the response on a mailer, and are thrilled to garner orders from one out of every 100 recipients. Lowenherz's 50 greatest love letters did substantially better, by my own estimated average, pulling a solid 63 percent. Admittedly, these numbers don't take into account long-term satisfaction; from Michelangelo to Anne Sexton, the most alluring lovers are hardly the most stable. Still, they ought to be good enough to make companies from State Farm Insurance to Omaha Steaks reconsider how they bait new customers with their limited-time offers.

Why have the 50 greatest love letters pulled so well? The answer is obvious enough, if you only know where to look: "The Dartnell Direct Mail and Mail Order Handbook." Begin with a simple rule: "Tell your prospect exactly what your proposition is -- and what you want him to do -- right at the very beginning of your letter!" That's just what Virginia Woolf did, writing to fellow Bloomsbury author Vita Sackville-West back in 1927: "Look Here Vita -- throw over your man," she scrawled, "and we'll go to Hampton Court and dine on the river together and walk in the garden in the moonlight and come home late and have a bottle of wine and get tipsy, and I'll tell you all the things I have in my head, millions, myriads -- They won't stir by day, only by dark on the river."

Notice how everything is absolutely explicit here, as clear as a business proposition. In exchange for throwing over her man (i.e., husband Harold Nicolson), Vita will receive one dinner on a river, one garden walk, sufficient wine to become significantly tipsy and myriads -- count 'em, millions -- of the things in Virginia's head that already have made her among the leading minds of her day.

But Henry VIII does it better in his courtship letter to Anne Boleyn: "[I]f it pleases you to do the duty of a true loyal mistress and friend, and to give yourself body and heart to me, who have been, and will be, your very loyal servant (if your rigour does not forbid me), I promise you that not only the name will be due to you, but also to take you as my sole mistress, casting off all others than yourself out of mind and affection, and to serve you only ..." Not that he exactly followed through.

In advertising, we must remember, honesty is a commodity that can be traded freely against expectations; since Henry clearly didn't need Anne as a repeat customer, he could afford to promise her more than his final cutthroat offer.

Ernest Hemingway effectively used another technique in a letter to future wife Mary Welsh. The purpose of Hemingway's note, like so much love mail, is to elicit a reply from his significant other, to the apparent profit of both parties, through a kind of closed-link chain letter. Notice how he expertly applies Dartnell's advice that "Letters and advertising copy should concentrate on one main theme to assure unity of impression and fullest impact" in the following excerpt: "Stayed in last night instead of going out to dinner because thought there might be mail. But there wasn't. And then was sure sure there would be some this morning. There had to be. Today was the 17th and you got in on the 12th. But guess what? There wasn't any mail." Of course Hemingway is famous for comparing good writing to an iceberg, advising that 90 percent of a story go unsaid.

In advertising, subtlety is a sure step toward bankruptcy, but another writing workshop rule does apply: "Specific words are necessary for exactness," according to the direct-mail pros. "Economical is less specific than moneysaving or timesaving. Lights glare, gleam, glitter, glow." So we see how deft Wolfgang Amadeus Mozart was in a note he sent his wife while out on the road in the spring of 1789. "If I were to tell you all the things I do with your dear portrait," he confided to his beloved Constanze, "I think that you would often laugh. For instance, when I take it out of the case, I say, 'Good-day, Stanzerl! -- Good-day, little rascal, pussy-pussy, little turned-up nose, little bagatelle, Schluck and Druck.'... Well I suppose I have been writing something very foolish (to the world at all events); but to us who love each other so dearly, it is not foolish at all." In fact, it's really rather clever. Direct marketers are always searching for means to make their mail appear personal. In this ink-jet age, "Dear Occupant," just won't do. It's only a matter of time before advertisers compile a database of terms of endearment.

Another rule familiar to anybody who has suffered through a high school composition class is to "Draw word pictures with analogies, similes, and metaphors." What the average high school student might not know is how to apply such a skill to bed his neighbor's wife while reserving the right to fondle any other lady he likes. Admittedly a tricky proposition that confounded founding father Benjamin Franklin. Still, he made an admirable attempt, in a letter to a certain Madame Brillon, who complained that she was not the only woman permitted to sit coquettishly on his 70-year-old lap. Responding to her accusation of infidelity, he noted in his best French, "The sweet sounds brought forth from the pianoforte by your clever hands can be enjoyed by twenty people simultaneously without diminishing at all the pleasure you so obligingly mean for me, and I could, with as little reason, demand from your affection that no other ears but mine be allowed to be charmed by those sweet sounds."

James Thurber had an even tougher time courting young Eva Prout, who had the audacity to ignore his advances utterly. So he applied, perhaps inadvertently, another Dartnell rule, instructing copywriters to "Inject interesting personalities -- when you have them to write about. People are interested in other people. The more interesting the people, the more interested other people are in reading about them." Naturally, we've all seen testimonials before, and poetic evocations of figures from history, but James Thurber may hold something of a record in the following litany: "A woman is often a wonderful thing. And you are. But in you, as in all of them, is the indifference of Carmen, the joy in cruelty of Cleopatra, the tyrannical marble-heartedness of Katherine de Medici, and the cold glitter of all the passionless despots of men's warm souls since sex first originated -- since Eve broke the heart of humanity forever and laughed with sadistic joy at Adam sweating blood on the rack she made for him ..."

The careful reader will notice that Thurber also earns points for image-making, specificity and unity of impression, and it may only be because he offers his reader no fathomable benefit that he and hard Eva didn't wind up in the chapel of love.

Finding himself in a position not dissimilar to Thurber's, George Bernard Shaw applied a different direct-mail technique to woo the actress Stella Campbell: "Don't talk about yourself and your product. Do talk about your reader and his problems -- a letter is interesting to him if it is about him." They'd been off-and-on lovers before, and as any advertising man knows, familiarity with your customer is essential to a successful appeal. Still, Shaw arguably took talking about his reader's problems a little too far when he wrote her, "You have no nerve: you have no brain: you are the caricature of an eighteenth century male sentimentalist, a Hedda Gabler titivated with odds and ends from Burne Jones's ragbag: you know nothing, God help you, except what you know all wrong: daylight blinds you: you run after life furtively and run away or huddle up and scream when it turns and opens its arms to you." Campbell responded promptly. "[W]hy should I pay for all your shortcomings," she asked, as good a reminder as any that even the best direct-mail advertising must be backed up by decent customer service.

That's one notion Napoleon appreciated, if not always for his country, then at least for his wife. "Does the letter have the 'you' attitude all the way through?" "The Dartnell Direct Mail Handbook" asks. "You can tell easier than you think. All you have to do is put yourself in the other fellow's place." Simple as that may be when that fellow is your typical presorted third-class rube, when it's the Empress Josephine, enamored of affairs with other -- presumably taller -- men, it can be more trying than being trounced by the Russian army in the dead of winter. So Napoleon deserves at least a Clio for writing, "I think I would rather myself give you a lover than know you to be miserable." And for confessing to her that, "If Josephine is unhappy, if she lets herself be sad and discouraged, then she doesn't love me," a declaration for which there is no "Dartnell" rule, he may even deserve our honest admiration.