BattleBots in the bedroom 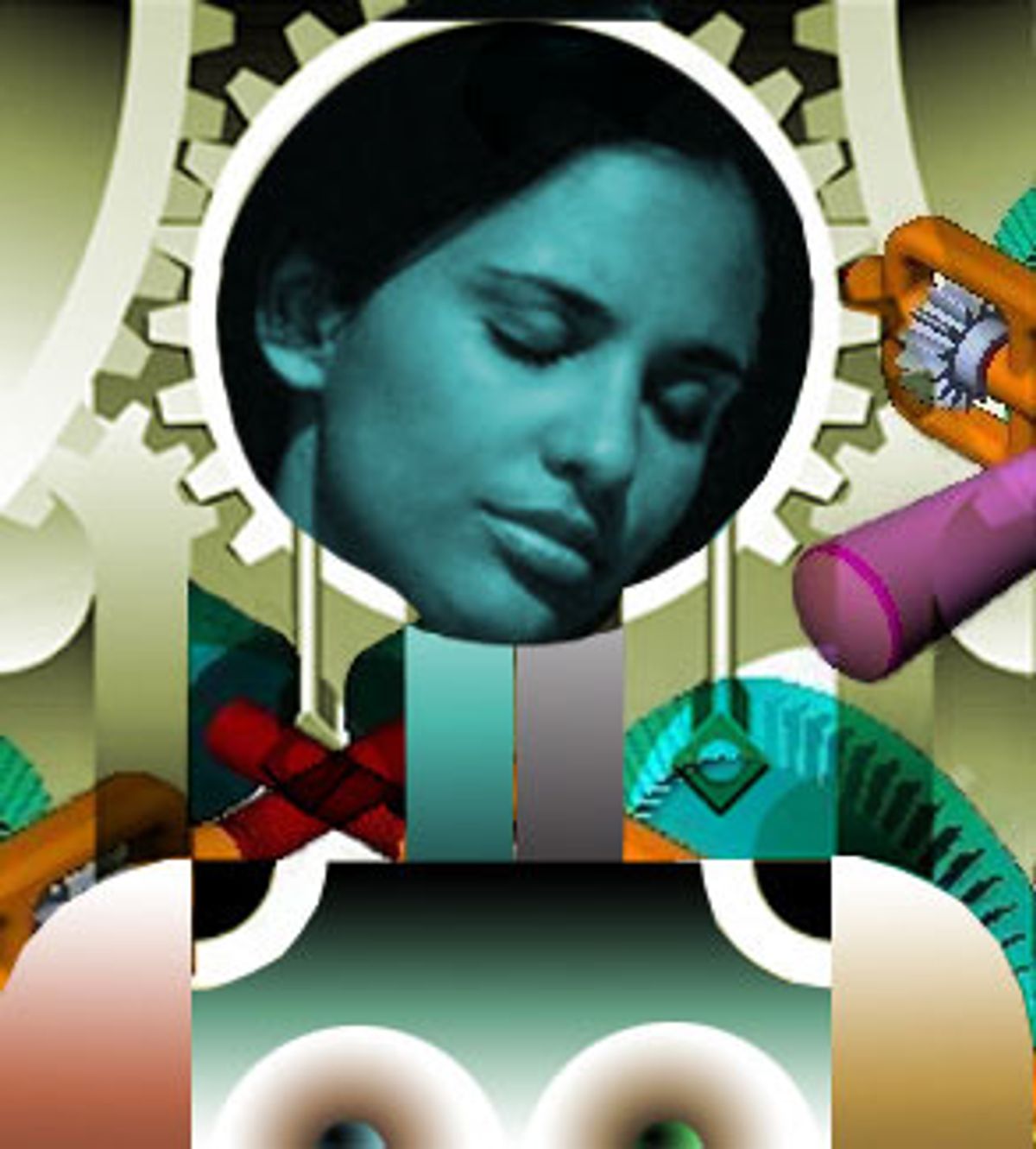 Gesturing with this tool of titillation -- or torture -- Pirelli explains, "Some girls really need a good solid performance."

This is what passes for a technology demo in San Francisco in February 2002.

The BattleBots have invaded the bedroom, courtesy of a pornographic Web site that streams videos of women having sex with monstrous machines. It's a twisted garage mechanic's fantasy of what sex would be like if all the men had been replaced by mechanical bulls.

Here, sexual prowess is measured in torque and horsepower. And compared with the more menacing machines, the Drilldo is a baby-faced sweetheart.

Maybe the most absurd of all is the Goat Milker, which happens to be an actual goat milker bought from an unsuspecting farmer in Oklahoma, now repurposed for repetitive nipple stimulation. Are we to believe the goats miss it? In any case, so far no adventuresome woman has deigned to be the guinea pig for that barnyard perversion.

Along with the Internet came no shortage of frisky sexual cyborg gadgets, as adventures in teledildonics and Real Dolls prove. Technology would make everything better, even sex.

But post-dot-com blowout, there are no true believers anymore, so, for 2002 we have a tech-sexuality stripped of artifice: machines that fuck. No need to dress up them up with false eyelashes and painted-on lipstick. They're just jittering, gyrating, rotating, rumbling masses of raw thrust.

"The eroticism of the big gizmo is undeniable," says local sexologist Carol Queen, who has featured similar monster machines at her own play parties. "It's a variant on robot sex."

There's a certain perverted nerd logic to it. If Survival Research Laboratories made watching humongous machines blow each other up the pinnacle of geek art, isn't bedding down with massive machines just the next step?

But the site isn't for women searching for that perfect inhuman partner who won't ever go soft or quit (unless the power fails). It's a subscription service for gearhead men (and some lesbians) who pay to see women go at it with these larger-than-life mechanical lovers. The site isn't selling the machines themselves, it's selling the machine dream.

But wait, the machines have no sexual orientation. Soon, gay men will get their own chance to ogle mechanized molestation. Buttmachineboys.com is on the way.

"Everybody knows about leaning up against the washer during the spin cycle, right?" says Queen. "There's something about the idea of getting sexed up and just finding things around the house."

It's like an X-rated version of a children's story where the lamps, the blender and the hot-water heater come alive and run riot.

Susie Bright believes that the newness of the big machines is the real turn-on. "The unfamiliarity is 90 percent of the excitement or the revulsion." What makes the machines look horrifying to some is exactly what makes them titillating to others: "It's about the fear of being fucked by a machine," says Bright. "It panders to that fantasy or nightmare, depending on your point of view. Taboos that are fearful are also exciting. This is the nature of taboo sexual fantasies."

In the great tradition of zillions of obfuscating Internet pornographers before them, the guys behind FuckingMachines.com refuse to say how many people use their service or how much money they're making or losing. But someone gets turned on by this, judging from the discussions on the site's forums. Sample request: "Show the machines being adjusted for the girls, and show the girls getting ready to take the machines."

That just won't satisfy the true tech-fetishists. Violet Blue, a member of Survival Research Laboratories and the Good Vibrations sex store collective, finds the roughshod workmanship a turnoff: "If you look at them, they don't look particularly sturdy or well-constructed. They're just these things that are C-clamped onto boards and pipes."

Is it possible that the machines found here are the primitive ancestors of robot love slaves of the future? Peter Remine, the founder of the only partially tongue-in-cheek American Society for the Prevention of Cruelty to Robots, sees nothing to worry about -- yet. "At this point, the machines aren't sentient, so there's no cruelty involved, just creepiness." But he is concerned about the fate of the droid sex slaves that these machines foreshadow. He foresees the sad day when a joke e-mail with the subject line "50 Reasons that a Robot Makes a Better Lover Than a Man" will be nothing to laugh at.

Already robot fetishists show their devotion by taking existing pinups and morphing them into robots and cyborgs, according to M. Christian, the editor of "Eros Ex Machina," an anthology of stories about "eroticizing the mechanical."

Queen sees the robot lover as a given, if the robots ever get their act together and come alive: "I'm sure that there are people standing in line right now willing to mortgage the house to get a love droid."

But that's what makes the love machine dream exciting -- the sense that technology has already gone too far, and there's no going back. "They said the same thing about the Hitachi Magic Wands 20 years ago," says Bright.

Perhaps one day the gigantic sex machines may suffer the same fate, leaving jaded thrill-seekers searching for their next outlandish orgasm. "If these things became common, they would feel the same way about them as they do about patio furniture," says Bright.