I refuse to pull out the video camera every time my 3-year-old shimmies into his pink evening gown. 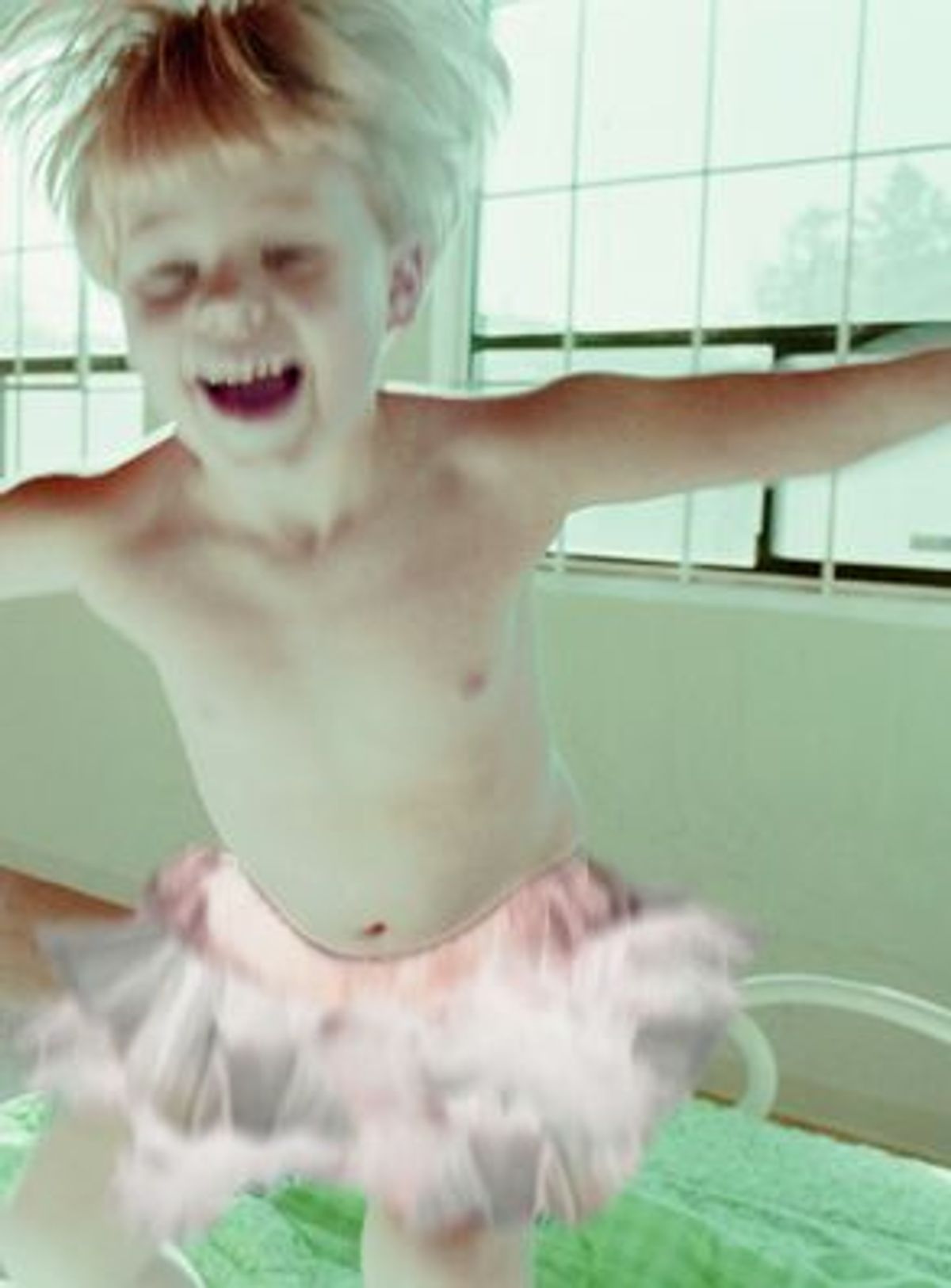 The other day I told a friend how Elias, my 3-year-old son, shimmies into his pink-sequined evening gown, slips his feet into his high-heeled silver shoes with the pink fluff on them, then clacks around the house like a tiny diva. "Did you get him on video?" she asked.

I said "No," and she moaned, "Ohhhhh, you should have," a look of disbelief and disappointment on her face. Then, when I explained that I don't even own a video camera, she looked at me like I'm a neglectful parent, like I'm letting my boys' very lives trickle through my fingers.

My kids are just going to have to depend on their memories to supply them with videos of themselves dressed as Native-Americans in brown paper-bag costumes, singing "I'm a Little Turkey" off-key. The remembrance of things past worked fine for Proust. If memory was good enough for him, it's good enough for my boys, too.

There are no tapes of me dressed in a tutu as a fairy, waving my tinfoil wand in the first grade play. I don't even remember the play, and wouldn't have even known about it if weren't for a blurry black and white photograph of me in all my knock-kneed glory. There's probably a good reason why my brain edited out that moment.

There aren't any tapes of me running brown-skinned and bare-chested around my backyard thumping my chest like Tarzan, either. There aren't even any photographs of that chest-thumping me at all, yet I remember wanting to be Tarzan as if it were yesterday. I can see myself crawling through the jungle of velvety green kudzu in the woods across the street from my house, looking for a ropy vine to swing from. I remember how I felt, standing in the blue shadows of those trees, desperately wanting to be something I wasn't. If my mother had had a video camera, you can rest assured she would've chosen to film me as a fairy.

But my parents barely photographed me or my siblings after we stopped drooling. When they did, it was usually a holiday. There's a photograph of us lined up together in our Halloween costumes: a scarecrow, a big black witch's hat, a small witch, a black cat. What's evoked for me is what's not in the photograph: my older brother itching furiously under all those cornshucks, my next-to-oldest brother nearly passing out from the fumes the black hat gave off, my sister madly scratching the redbugs that crawled out of the Spanish moss witch hair onto her scalp, me sniveling in the middle of my grandmother's bedroom while my mother kneeled beside me sweating, pinning the seams of my cat costume together minutes before the parade started.

We almost always had a family crisis right before a photograph was taken, especially as we got older. There's one Easter photograph I can barely stand to look at. My brothers are brand-new teenagers; my sister and I are on the edge. We've already made our appearance at the First Baptist Church, my manic depressive mother's defining moment. We've fidgeted through a boring sermon, endured an endless version of the hymn "Up from the Grave He Arose." It's the last time Mama will be able to coerce us into dressing like that, my brothers in lookalike blue suits, my sister and I in identical flowery dresses, stockings the color of party mints, shiny white patent leather shoes.

Mama has arranged us in front of a bed of giant pink azaleas. Bees hum in the hot, muggy air. I am hunched to one side to give the illusion of shortness. My brothers look as though they have been shocked with cattle prods; my sister looks like she's trying to will herself to disappear. And my mother and father stand on either side of us, my dad with his usual frumpy look, my mom beaming with fake happiness. She'd just told us what a bunch of fucking losers we were for not being more cooperative. My uncle snapped the picture. Cameras of any kind seem to bring out the despots in people.

But I confess; at times I do want a video camera: when Jordan fought off monsters in our front yard, wielding a stick sword and a garbage can lid shield; when Samuel danced like Fred Astaire across the wooden floor, his brown fedora tipped over his eyes; when Elias dressed as the pink princess, murmuring to himself. But I suspect that if I had stepped into the scene, video camera pressed to my eye, Jordan would've stopped fighting his monsters and started fighting for the camera. Samuel would've stopped dancing, and Elias, well, Elias would've probably primped, ham that he is. That's what happens if they catch me lugging the old 35 mm out of its case -- the air in the room shifts, the moment is changed.

I probably sound like a crank, or maybe a Luddite, someone afraid to embrace the technology. But in truth I'm probably more of a romantic, like my girlfriend, who told me how she'd gone camping with her old boyfriend. He spotted a deer grazing in the sunlit meadow by their tent. A classic Kodak moment. Get the camera, he whispered, but before she could click the shutter, the deer and the moment were gone and she'd missed both. She saw the camera as an intrusion on the natural order of life, which is to be experienced, she said, not watched from behind a viewfinder.

I'm not the purist my girlfriend is. I do photograph our children; I try to catch them unaware, lost in their worlds. It doesn't always work out though -- the bubble bursts and they end up posing for me instead.

I treasure the photos I have of my boys, their doe-eyed looks, their fat baby bottoms, their naked boy bodies rollicking in the tub. I want to hold them forever in those moments; preserve them, keep them alive. I'd love to always hear their baby boy voices, their made-up words, the songs they sing. I'd love to always watch them dance their little boy dances. I want to keep my boys forever. But I can't, any more than those Victorian mothers in those silvery tinted Daguerreotypes could hold onto their stillborn babies by having them photographed cradled in their arms as if alive.

There's no question: videotape is powerful stuff. We'll be watching those images of the airplanes ripping into the twin towers for the rest of our lives. But the tape is no substitute for the actual event, which was more horrible than any of us can imagine, unless we were there. The tape is a sterile version of what happened; the same as it was during the Gulf War, when so many people watched those eerie green images on TV, tracers streaking across the sky like fireworks, those gray images of bridges being blown to pieces, all cold images preserved behind the glass wall of the television. More haunting, to me, are an old friend's descriptions of the tracers she saw in Vietnam while serving as a nurse near the frontlines. They were beautiful, she said, bright orange streaks across the black jungle sky. I remember them so vividly, she said, yet I can't remember the faces of any of the boys we ended up putting in those black body bags, not a one.

Our minds edit our stories for us in a way that videotape can't. What we remember and what we forget becomes the narrative of our lives. When I watch Jordan gallop across the yard like a pony, neighing and pulling his squealing brothers in their little red wagon, I can't help but wonder if a videotape of that moment would override his own memory, focus his eyes where they wouldn't have been focused. If someone is taping you, they are taping what they see, not what you see.

I suppose I'm wary of narrating my sons' lives by filming what I think are their memorable moments, plus I don't want to watch Elias pull on his shimmery dress from behind a lens, worrying if the focus is right or wondering if my arm is jerking too much to steady the camera. I want to watch my boys with my naked eye. I leave the pink dress to Elias; let him make up his own story about what's going on. I want all my boys to make their own home movies in the velvety darkness of their own imaginations, the same way Wordsworth made poetry from "emotion recollected in tranquility." So, I reluctantly let those moments go, and try to remember as much as I can.