The former Yugoslav president stands accused of crimes against humanity as the most important international trial since Nuremberg begins. 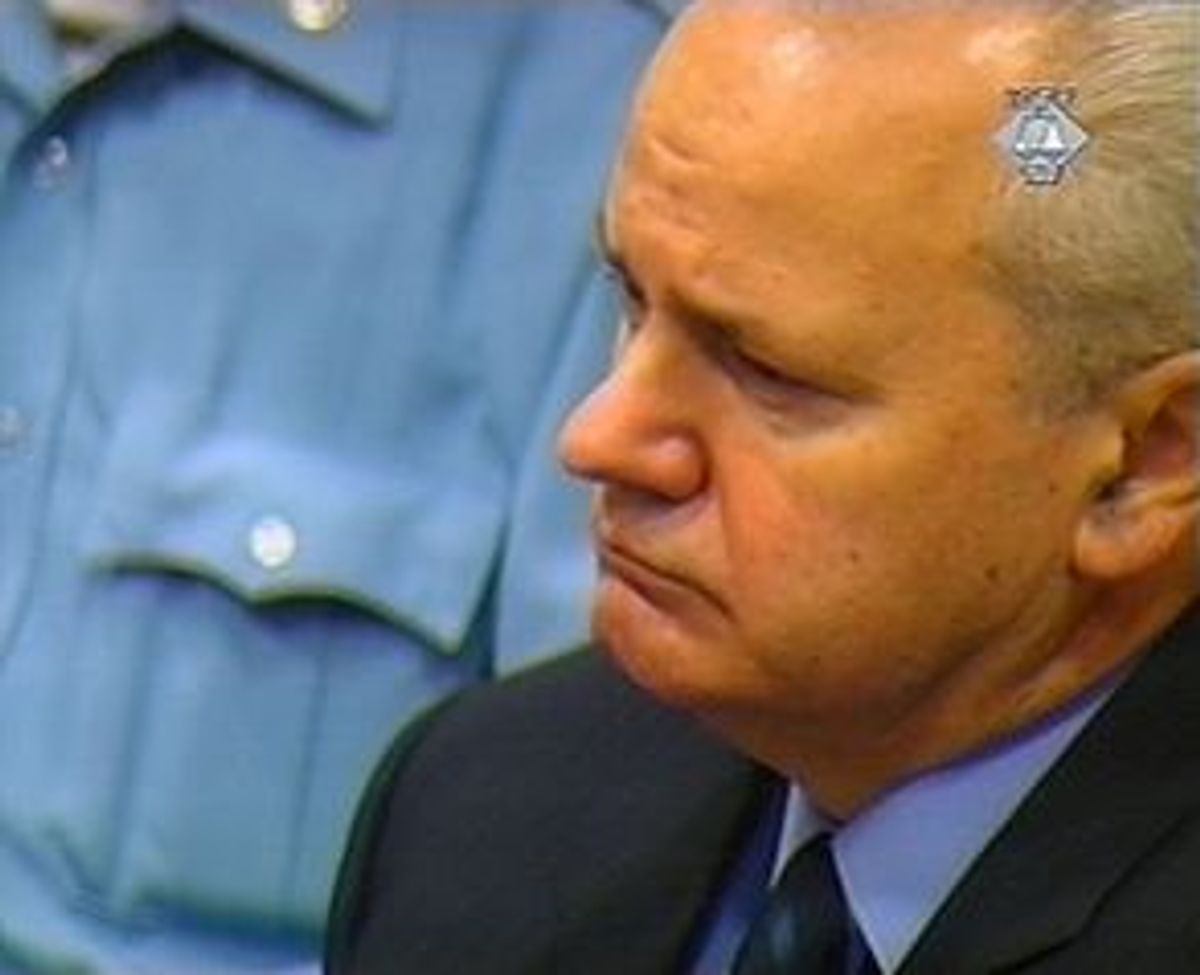 Shifting in his chair and occasionally taking notes, Slobodan Milosevic, the first head of state to be charged with war crimes committed while in office, listened impassively today as his historic trial got underway. Prosecutors from the U.N. international war crimes tribunal described the former Yugoslav president as the shrewd and calculating mastermind of a decade of brutal genocide, forced deportations and campaigns of "almost medieval savagery," all designed to create a Greater Serbia out of the former Yugoslavia and consolidate his own power.

"We should just pause to recall the daily scenes of grief and suffering that came to define armed conflict in the former Yugoslavia," Carla Del Ponte, the chief prosecutor of the U.N. International Criminal Tribunal for the Former Yugoslavia (ICTY), told the trial chamber. "The events themselves were notorious, and a new term, 'ethnic cleansing,' came into common use in our language. Some of the incidents revealed almost medieval savagery and a calculated cruelty that went far beyond the bounds of legitimate warfare.

"The Chamber will now begin the trial of this man for the wrongs he is said to have done -- to the people of his own country and to his neighbors," Del Ponte said. "How simple that statement is to make today, and yet how remarkable it is that I am able to speak them here. Today, as never before, we see international justice in action."

Del Ponte told the court that the 66 counts of war crimes against Milosevic, ranging from crimes against humanity to genocide to violations of the Geneva conventions, are not "local affairs," and their prosecution belongs in a world court.

"Crimes of [this] magnitude affect all of us throughout the world," Del Ponte said, as Milosevic, in a navy suit with his white hair cut short and brushed back from his face, looked on. "These crimes touch every one of us, wherever we live, because they offend against our deepest principles of human rights and human dignity. This Tribunal, and this trial in particular, give the most powerful demonstration that no one is above the law or beyond the reach of international justice."

Del Ponte, a Swiss, and her fellow prosecutor, British lawyer Geoffrey Nice, allege that Milosevic deliberately fanned the flames of ethnic nationalism and fear that contributed to Yugoslavia's violent breakup. Further, they claimed today, Milosevic was both aware of and refused to halt the savage behavior of troops, police and paramilitaries under his de facto and official control who committed genocide, crimes against humanity, the willful destruction of property and ethnic cleansing.

As prosecutors laid out the scope of their case against Milosevic today, they emphasized that the trial will be an opportunity for survivors of atrocities to tell their stories, and give voice to the tens of thousands who didn't survive to testify.

Some 200,000 people were killed in wars that began in Croatia in 1991, continued in Bosnia from 1992 to 1995 and erupted in Kosovo in 1999. Many hundreds of thousands were forced to flee as refugees. Houses were burned, women were raped, ethnic minorities were forced to flee their homes and many thousands of civilians were massacred.

"In 1992, in Visegrad, Bosnia, a young woman, heavily pregnant, found the town taken over by Yugoslav soldiers," Nice told the courtroom today. "Because of what was happening, she and many other people took to the woods at night, indeed she gave birth to her daughter in the woods at night. And it would appear from evidence we do have, that she gave that daughter a name. But we can't tell you what the name is. In due course, that woman, her baby and many others including some 45 members of her extended family were taken to a house that had been prepared for them, with petrol on its carpets. They were burnt alive. And the baby's screams were heard for some two hours before it too succumbed.

"And so," Nice continued, "that is one crime to represent the thousands killed in the Bosnian conflict."

In her speech to the chamber, Del Ponte emphasized that the victims should be the focus of the trial. "Your Honors, while I bring the indictments as Prosecutor in the international public interest, I do not mean to ignore the victims of the crimes committed during the conflicts," del Ponte said. "Many victims cannot come before you because they did not survive. Nor is it possible, in the proof of crimes on such a scale as those in the indictments, for any prosecutor to bring all the surviving witnesses to give evidence in court."

Del Ponte also made a crucial legal distinction between Milosevic the individual, and Serbia, the nation and its people. "The accused in this case is charged as an individual," she said. "No state or organization is on trial here today: The indictments do not accuse an entire people of being collectively guilty of the crimes, even the crime of genocide ... Collective guilt forms no part of the prosecution case, it is not the law of the Tribunal, and I make it clear that I reject the very notion."

Her remarks seemed intended to forestall Milosevic's likely argument that the trial is really against Serbia, as well as being directed at those Serbs who, although they overthrew Milosevic in a peaceful revolution in October 2000, believe that the Hague Tribunal is biased against Serbs, and that Serbia as a nation is being symbolically tried for war crimes.

"What I most appreciate were Mrs. Del Ponte's comments that the focus of the trial is definitely on the victims," said Mary Greer, a Hague-based observer of the trial for the Coalition for International Justice, a Washington-based nongovernmental organization. "I also very much appreciated her distinction between individual criminal responsibility and collective guilt. And it shows that this trial is really all about the evidence. The evidence may include historical and political perspectives. But it really does boil down to what the actual evidence against Mr. Milosevic is, not about his country or his political party."

The prosecution's position that Serbs are not collectively guilty for Milosevic's alleged crimes will also be important in securing Belgrade's future cooperation with the Tribunal. In recent weeks, Del Ponte has ratcheted up the pressure on Belgrade's new leaders to extradite other Serb war crimes suspects, who could be crucial links in the chain of command connecting Milosevic to crimes committed in Bosnia and Croatia. Two indicted men in particular, the former Bosnian Serb President Radovan Karadzic, at large in eastern Bosnia, and the Bosnian Serb Gen. Ratko Mladic, who is believed to be living under Yugoslav army protection in Belgrade, are key figures without whom it may be difficult for prosecutors to establish Milosevic's command responsibility for war crimes perpetrated in Bosnia from 1992-95.

Rumors are rife here that Belgrade could extradite key war-crimes suspects here in the next few weeks. Belgrade authorities extradited Milosevic himself here last June, under pressure of a U.S. threat to boycott an upcoming donors conference for Yugoslavia if they did not do so.

The trial, in a four-story blond brick courthouse in this sleepy, windswept seaside Dutch city, is the most important war crimes trial since the Nuremberg trials in Germany after World War II. It could involve as many as 300 witnesses and is expected to last two years. Del Ponte acknowledged that the trial "will certainly test the criminal justice process itself."

Beyond logistics, Milosevic's trial raises momentous questions about the relationship between law and politics and law and power. A permanent international criminal court could hold heads of state or their subordinates responsible for war crimes years later, with the definition of "war crimes" a highly political judgment. For this reason, the United States, fearing its own officials could be prosecuted, has opposed the creation of such a court.

As was the case at the Nuremberg trials, some accuse this trial of being political. A group associated with former U.S. Attorney General Ramsey Clark, an outspoken supporter of Milosevic and critic of U.S. foreign policy who has accused NATO of war crimes in the Balkans, passed out leaflets reading "Free Slobodan Milosevic! Jail George Bush!" to journalists at the trial today.

"This is an illegal court," said Bill Cecil, who was passing out the fliers on behalf of Clark's group, the International Action Center. (The IAC is affiliated with the Workers World Party, which took the side of the Chinese regime against the Tiananmen movement.) "It's a private court that's funded by the U.S., the U.K., the belligerent parties, also by [financier George] Soros and private corporations like CNN. The judges are in complete collaboration with the prosecutors and with the arresting forces."

From the outset, Milosevic has also rejected the Tribunal's legitimacy. As a sign of that rejection, the 60-year-old Serb, a graduate of Belgrade University law school, has refused to appoint lawyers to defend him and chosen to represent himself. In previous statements, Milosevic has vowed to call as witnesses world leaders and diplomats such as former U.S. President Bill Clinton and diplomat Richard Holbrooke, who at one time, Milosevic alleges, treated him as a peacemaker. Meantime, the ICTY has appointed a team of amici curiae, or friends of the court, to try to make sure the trial is fair to the former Serbian and Yugoslav president.

Milosevic was originally supposed to face two trials: one for the five counts he is charged with in Kosovo, and another for the 61 counts he is charged with in Bosnia and Croatia. But earlier this month, Tribunal judges agreed with Del Ponte's request that the trials be combined into one, in part so that many of the witnesses she wants to call to testify only have to appear one time.

Because he served as president of the Federal Republic of Yugoslavia, of which Kosovo is a part, Milosevic's command responsibility over troops and police that are alleged to have commited atrocities in Kosovo is considered easier for the prosecution to prove than for those crimes that occurred in Bosnia and Croatia.

While prosecutors had the floor today, laying out their case for more than four hours in a presentation that included video clips and recorded phone conversations between Milosevic and Karadzic, Milosevic will address the court at length on Wednesday.

Then the victims will take the stand.

"The victims demand truth," del Ponte said. "This is the contribution of justice, and we wish to make it dispassionately."

"If humanity wishes to be worthy of that name," del Ponte concluded, recalling the words of the Nobel prize-winning Yugoslav writer Ivo Andric spoken at Sarajevo's Jewish cemetery, on a grassy hilltop above which Bosnian Serb snipers shot at Sarajevo civilians during the war, "it must erect a barrier which is sound and sure, and truly punish all the murderers of men and peoples."